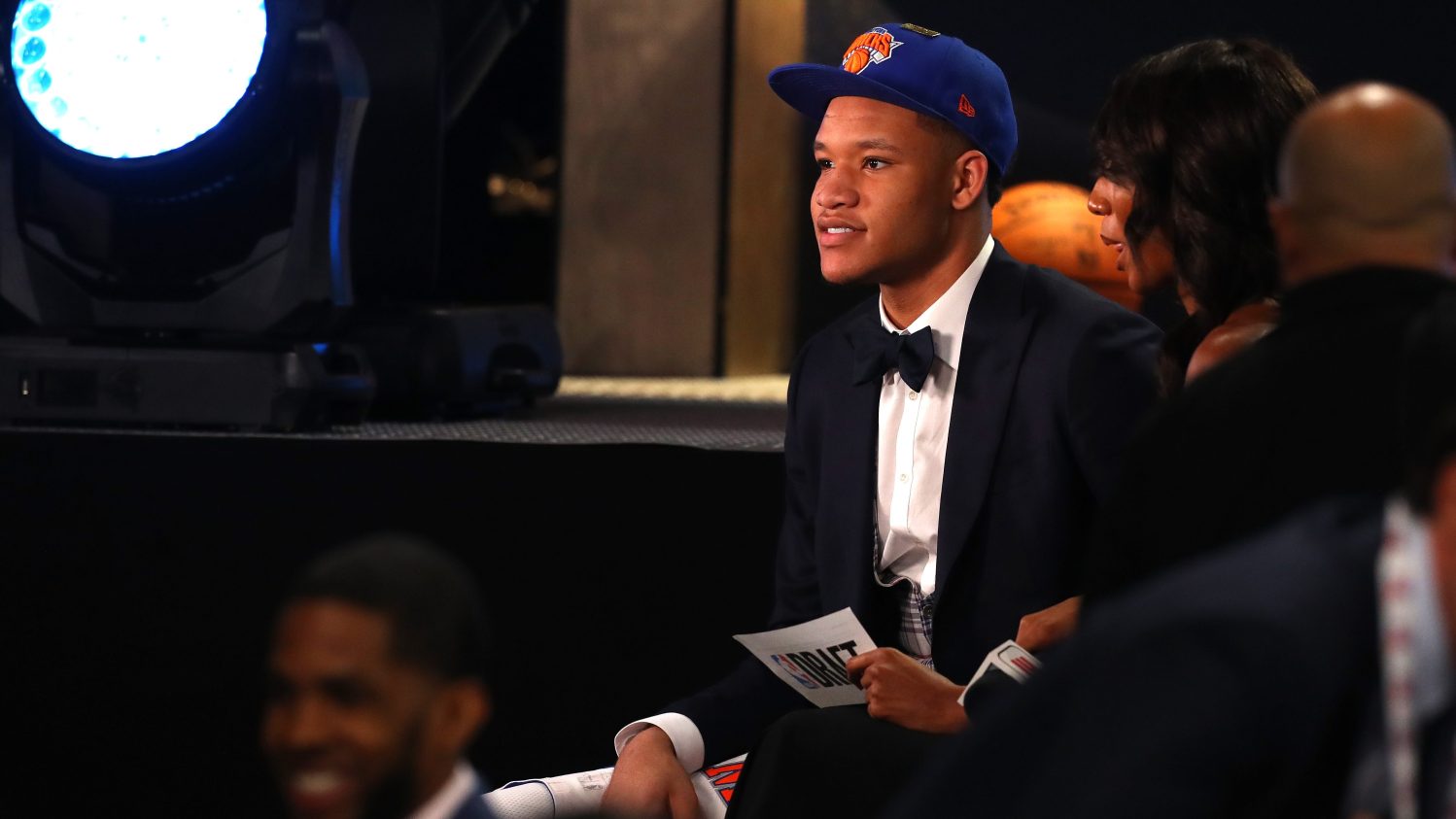 Kevin Knox speaks with the media after being drafted ninth overall by the New York Knicks during the 2018 NBA draft at the Barclays Center on June 21 in Brooklyn, New York. Photo by Mike Stobe/Getty Images
2018 NBA Draft

NYC goes with Kevin Knox over Michael Porter Jr., but it’s really all about 2019

BROOKLYN, New York — “It’s like being allergic to pine nuts but still eating the pesto sauce from [sleek Italian restaurant] Il Mulino,” says Harlem native Nick Mitchell, 31. “You’re just hoping it gets better before it gets worse.” He’s talking about what it feels like to be a lifelong New York Knicks fan.

The Knicks have won a grand total of seven playoff games in the past 18 seasons — this includes just one series victory. They’ve missed the playoffs 13 times in that span. And Knicks fans have dealt with a slew of questionable (at best) and outright hideous (at worst) front-office decisions. The mere mention of owner James Dolan is enough to make fans’ blood pressure skyrocket. Yet the faithful fans piled into the Barclays Center in Brooklyn on Thursday evening. A sea of Kristaps Porzingis jerseys populated the crowd, along with the jerseys of Patrick Ewing, John Starks, Carmelo Anthony and Stephon Marbury too.

“Dolan, I swear … ,” another yells as his voice trails off.

The climate was cautiously optimistic about 30 minutes before the Knicks’ ninth overall selection. But the common understanding among anyone wearing blue and orange last night — no matter race, age or gender — was that this moment wasn’t about becoming better immediately. Porzingis, the franchise cornerstone, will miss perhaps the first half of the season recovering from an ACL tear he suffered shortly before the All-Star break in February. Thursday’s draft was the first piece in a long-term play for relevancy — an aroma many young Knicks fans have never smelled.

“It’s pivotal we build for the future, starting tonight,” said Damien Murrell, a Knicks fan since 1986. Murrell’s energy is infectious. He bounces when he talks. The tails of the do-rag beneath his Knicks fitted do too. “LeBron [James] is getting older. Golden State is getting older. So I feel this is … important. … We can solidify our team.”

That’s what the draft is about: making smart decisions, something that hasn’t exactly been the franchise’s calling card in recent decades. Madison Square Garden, in recent years, has become a shop of horrors for Knicks fans. Kobe Bryant, LeBron James, Dirk Nowitzki and Stephen Curry have all torched the Knicks. But none of them has ever played a “must win” game in The Garden. James, who up to this point has played his entire career in the Eastern Conference, has never played in New York when its lights are brightest and the Knicks have a team that even gave somewhat of a resistance (aside from a five-game domination of the Knicks in 2012). It’s the summer of 2019 that is potentially franchise-altering. The job Thursday night was to make the Knicks more attractive:

“This is probably gonna be their big offseason addition based on … their salary cap situation,” ESPN front-office insider Bobby Marks said on the draft floor about an hour before the festivities began. “This is not as big as Porzingis [in 2015], but this is probably close to being as big.”

What happens 12 months from now depends on what the Knicks do with Porzingis in the coming months. If the Knicks remain patient and wait until next summer to max out their international cornerstone, the Knicks could have between $30 million and $35 million in cap space, Marks said. Who could this lure to Gotham City? Players along the lines of Jimmy Butler and Klay Thompson will both be free agents next summer. Marc Gasol, Khris Middleton and Malcolm Brogdon will be too. It might be a pipe dream, but even a dream is a positive for Knicks fans, and there is an outside shot Kevin Durant and Kawhi Leonard will be available next summer too. But the name on the lips of seemingly every Knicks fan is Kyrie Irving.

“It’s tough being a Knicks fan. Definitely. … But I know when they’re good at some point, it’s gonna be the best times of my life.”

It’s hard to blame Knicks fans for placing a white, blue and orange jersey on Irving already. For already imagining pick-and-roll sets with the 2016 NBA champion. Despite the injury histories for both Irving and Porzingis, it’s potentially a devastating duo. That’s why Thursday night held such significance.

“I probably cannot overestimate the importance of this pick,” said SportsNet New York anchor Taylor Rooks. “What the Knicks have to do is get assets. So when summer of 2019 comes … they can barter. … They can maybe try and get Irving.” She says Knicks fans need something good to happen to them. “We talk about how [the team is] bad, how they lose, how Porzingis isn’t healthy and all this stuff. It’d be nice if they got a pick who ended up being Rookie of the Year. It’s for the future, but it’s also just hope for the fan base.”

And right now the fan base is all “We want Porter!” They were chanting this as the clock ticked down to their selection. It’s high-risk taking Michael Porter Jr., but there’s an even potentially higher reward. Hope has morphed into electricity. The moment of truth is on the horizon. Yet, over the course of the night, many Knicks fans had mentioned Kentucky’s Kevin Knox as a guy they’d be happy with. “They know how to screw things up,” said longtime Knicks fan Kelly Damour with a laugh. He’s heard it all before — and he’s remained loyal to the team since the glory days of Patrick Ewing. “I’m a little anxious … about what they’re gonna do.”

As the pick is about to be announced, Knicks fans are scattered throughout the arena, but it’s impossible to miss them. They’re loud. They’re proud. They’re also scared out of their minds. Knox is right there at the ninth pick. But leave it to the Knicks to find themselves in a quagmire — even with the guy so many fans wanted just an hour earlier. That’s because the dynamic Porter Jr. is there for the taking. Quite literally in the Knicks’ lap. Porter’s injury history is a red flag for many teams. He played all but three games of his lone season at the University of Missouri, but before his back injury, Porter was the consensus No. 1 pick coming out of high school.

“Don’t f— this up!” a fan wearing an Allan Houston jersey warns from his seat — speaking for every Knicks fan both in Barclays and beyond.

“Dolan, I swear …, ” another yells as his voice trails off.

The Knicks go with Knox. It’s the Knicks, so naturally some boos come, but not as many as expected. Some Knicks fans stare at the JumboTron, hands on their hips, attempting to make peace with their situation. Some talk to those around them about Knox. Others are indifferent.

Two Knicks fans who’d made their way to an aisle to watch the pick are struggling with the decision. “The fact [Porter] fell to nine, I feel the Knicks should’ve capitalized on that availability,” said Andy, a Long Island resident in a rare Tracy McGrady Knicks jersey. “Maybe they see something in Knox that I don’t see.”

His friend Jerry, from Glen Cove, Long Island, didn’t mince words. “The Knicks made a huge, huge mistake passing on Michael Porter Jr. You cannot pass up on that opportunity. Huge mistake. He’s the next version of a better Lamar Odom, and just under Kevin Durant.”

It’s the soundtrack of the night for Knicks fans. Optimism and skepticism. With new head coach David Fizdale manning the sidelines, adding to an already diverse front-office staff, a summer of dreams is just 12 months away. It’s the dawn of a new era for Knicks fans. They’re loyal to a fault — but they’re loyal.

“It’s tough [being a Knicks fan]. Definitely,” said Jason Levine, 20, a ride-or-die supporter. “But I know when they’re good at some point, it’s gonna be the best times of my life.”

“There’s no place to win like New York,” said Scott Richards, sporting a Kristaps Porzingis Latvia jersey. “People are gonna talk bad about the Knicks now. But, like Golden State, everybody’s gonna bandwagon New York when we’re back on top.”