Of the five players shown on television just before the winner of the 1989 Heisman Trophy was announced, just one, Andre Ware, showed signs of nervousness as his eyes kept dancing up and down and left and right.

Who could blame him?

Ware knew that despite a season in which he threw for 4,699 yards and 46 touchdowns and established 26 NCAA records as the quarterback at the University of Houston, it was the first time that season that most of the country had seen him on live TV.

His university, Houston, was on probation. That meant no live television and no bowl game. And yet Ware prevailed, becoming the first African-American quarterback to win the Heisman despite the fact that 246 of the 743 returned ballots did not include his name.

“Anything’s possible,” Ware said after he was announced as the winner, appearing via satellite from Rice Stadium in Houston just moments after he had passed for 400 yards and two touchdowns to complete his historic season. “I certainly wouldn’t have believed I could be in this position today.”

Why would he believe he’d one day be the catalyst of the most potent offense in the history of major college football after completing a prep career at Dickinson High School (about an hour south of Houston), where he ran the option?

Little-known fact: Ware had only one touchdown pass in his senior year of high school (on just 71 passing attempts for the season). Not exactly the numbers that interest college teams in need of a quarterback.

Which is why Ware had only three schools interested in him as a quarterback. He really wanted to go to the big state school, Texas, but the Longhorns wanted Ware as a defensive back, which prompted this advice from his mother, Joyce : “Stick to your goal. You’ll be a great quarterback.”

So Ware went to the University of Houston, where a coaching change in 1987, the year Ware arrived, would prove Mama Joyce prophetic. That’s the year Jack Pardee accepted the job as head coach, bringing with him the run-and-shoot offense that helped Hall of Fame quarterback Jim Kelly win the USFL MVP Award with the Houston Gamblers three years earlier.

As a sophomore, Ware was showing signs of embracing the wide-open offense, as he passed for 2,507 yards and 25 touchdowns in leading the Cougars to a 9-3 record (an improvement from 4-6-1 the previous season) and a trip to the Aloha Bowl.

As a junior, Ware had mastered the system, which was based on the ability of the quarterback and his receivers to make quick reads.

In other words, Ware had to be highly intelligent.

Ware threw for five touchdowns and 390 yards (completing 30 of 46 passes) in a 69-0 season-opening win during which he sat the last 10 minutes of the game.

In Week 6 there was a 95-21 trouncing of SMU, during which Ware passed for six touchdowns and 517 yards — in the first half. (He sat out the second half.)

Some criticized Ware and the Houston offense as being gimmicky, and others said the numbers were being put up against inferior competition (Houston did beat 18th-ranked Texas Tech, 40-24, and unranked Texas, 47-9).

Ware led the nation in completions (365), passing yards (4,699) and touchdowns (46) and tied or set 27 NCAA records. The 517 passing yards he had against SMU still stands as an NCAA record for a half.

Winning the Heisman made Ware a megastar. He went to the White House, met countless celebrities and was an invited guest at banquets and events across the country.

His intent was to return to Houston for his senior season, but by spring 1990, Ware had decided to enter the NFL draft.

When Ware was selected by the Detroit Lions with the seventh overall pick, it appeared the perfect fit. Wayne Fontes had assumed the head coaching job in 1989, and one of his first hires was Mouse Davis, who had used the run-and-shoot offense for much of his successful coaching career.

But Ware, the Lions and the offense never meshed. Like the situation that Joe Gilliam faced years earlier with the Pittsburgh Steelers, Fontes could never settle on Ware, Rodney Peete or Erik Kramer as his quarterback.

Ware never caught traction in Detroit, starting just six games. He threw five touchdowns in the NFL, which, most times in his last year of college, was a half game’s work.

After four years with the Lions, his NFL career was over.

Why didn’t Ware succeed in the NFL? As he was attempting to catch on with the expansion Jacksonville Jaguars in 1995, he said this to the Orlando Sentinel: “As a black quarterback … you have to succeed right away or things are different for you automatically after the first year, and you become a bust. It’s unfair, but, hopefully, the NFL is turning the corner on the aspect.”

Two months after saying that, Ware was cut by the Jaguars, leading to three years in the CFL (with the Toronto Argonauts, backing up Doug Flutie on the 1997 Grey Cup championship team). His professional career ended after the 1999 season with the Berlin Thunder in NFL Europe.

Ware remains tied to football as a respected sports announcer. On Saturdays he can be heard calling games on the SEC Network (he had previously called games for ESPN), and on Sundays he provides commentary for the Houston Texans on the team’s flagship radio station.

Today there are quite a few people who know Ware more for his current work as a sports analyst and less for what happened in 1989 when he lit up NCAA defenses like a video game in a magical season that led to his 2004 induction into the College Football Hall of Fame. 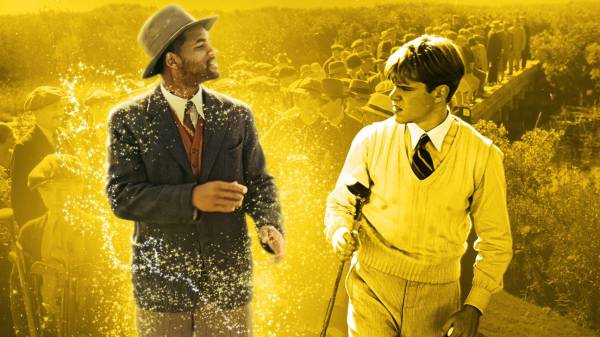 Before there were the last six African-American quarterbacks to win the Heisman — Lamar Jackson, Jameis Winston, Robert Griffin III, Cam Newton, Troy Smith and Charlie Ward — there was the first.

“It’s refreshing,” Ware said on the 25th anniversary of his Heisman win, “to reflect back on that year, that season, the group of guys with which I played with that year and just how special the year was.”