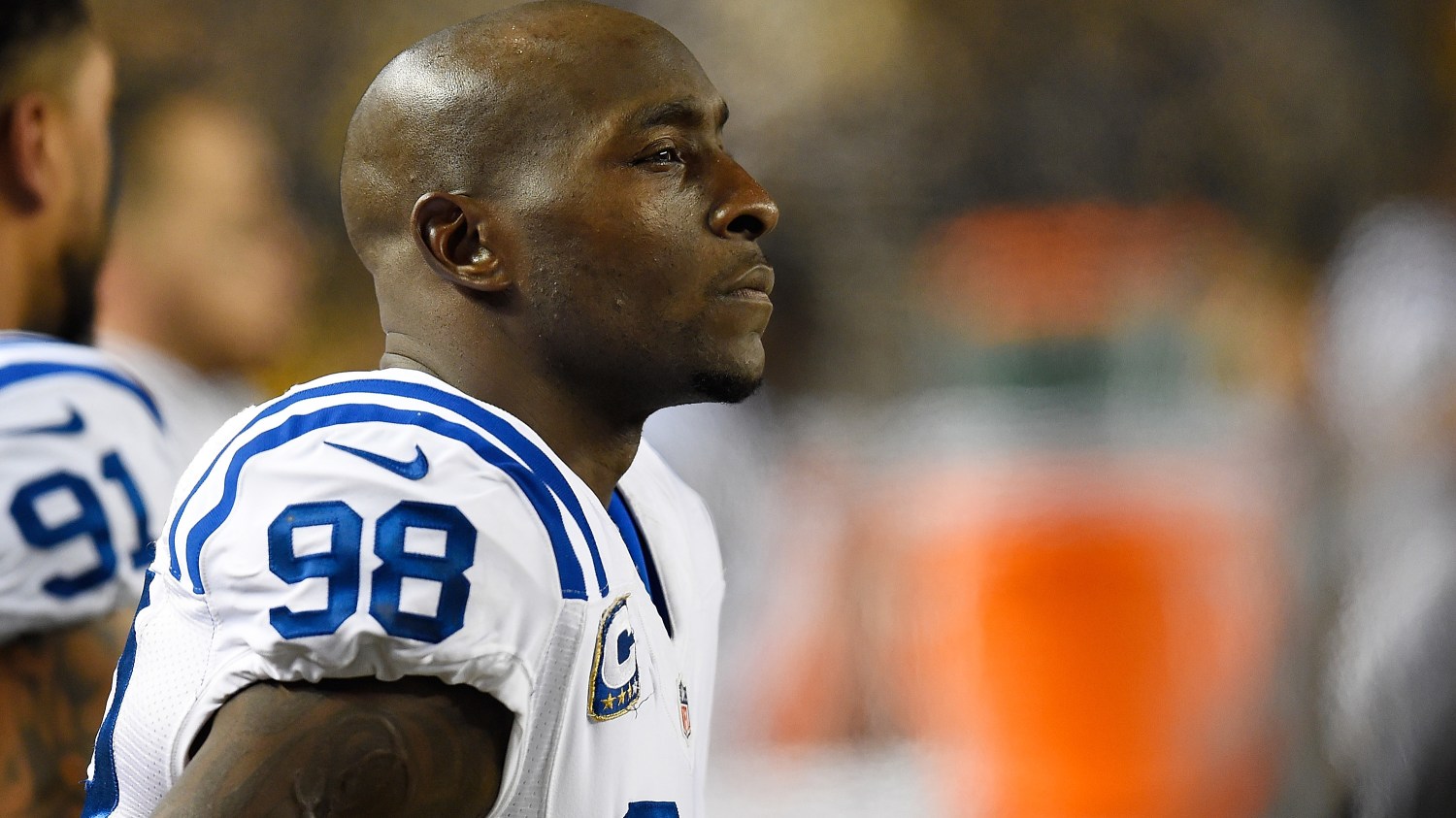 Robert Mathis #98 of the Indianapolis Colts looks on during the game against the Pittsburgh Steelers at Heinz Field on December 6, 2015 in Pittsburgh, Pennsylvania. Joe Sargent/Getty Images
NFL

Mathis on retiring: When you stomp with the big dogs, what can they say?

For 14 seasons, Robert Mathis proved his point. On this much, there’s no debate. From the moment he joined the Indianapolis Colts, the onetime Alabama A&M University standout reminded the doubters that some players from historically black colleges and universities (HBCUs) can roll at the game’s highest level. That’s what the Pro Bowl defensive end/linebacker did while relentlessly chasing down quarterbacks and racking up more sacks than any player in Colts history. The rest of it — assessing Mathis’ place among the best edge rushers of his generation, and evaluating his candidacy for the Pro Football Hall of Fame — involves matters for another day. With his announcement Friday that he’ll retire after the Colts’ season finale Sunday against the Jacksonville Jaguars, Mathis has almost reached the end of a fabulous run. And the best part is, with each step, he accomplished the most important thing he set out to do.

The five-time Pro Bowler became a cornerstone player for one of the league’s most successful franchises of the previous decade. The numbers tell the story of an elite baller:

Mathis’ accomplishments look even better against the backdrop of the skepticism he faced. Entering the 2003 NFL draft, many teams had many doubts about Mathis. Sure, he balled out at Alabama A&M (as a senior, Mathis recorded 20 sacks for the Bulldogs), but how good was the competition? And at only 235 pounds back then, could Mathis take the pounding he’d face as a 4-3 end? Bottom line: Was Mathis even worth a low-round pick? Former Indianapolis head coach Tony Dungy saw a lot to like.

Dungy envisioned the speedy, athletic Mathis being a good compliment for young end Dwight Freeney. Together, the Colts’ defensive-minded leader figured Mathis and Freeney could become an outstanding edge-rushing tandem in a league that was steadily de-emphasizing the running game. Pressuring the quarterback had never been more important. Then-team architect Bill Polian traded a future fourth-round pick to the Houston Texans for the third pick in the fifth round (138th overall). With it, the Colts got their guy.

Led by quarterback Peyton Manning, the Colts in the previous decade had one of the best stretches of sustained success in NFL history. Beginning in Mathis’ rookie year, Indianapolis reached the playoffs in nine consecutive seasons, won seven division titles, two AFC Championships and the Super Bowl after the 2006 season. On defense, Mathis and Freeney were as good as Dungy hoped. They consistently pressured quarterbacks, piled up sacks and forced turnovers. It all worked. And Mathis was instrumental to the Colts’ success. He never doubted he would be, though others certainly did.

“When you come from HBCUs, you have to prove you should be here, because a lot of people don’t think you should. I’ve gone through that numerous times,” Mathis said. “Do you make the right decisions? Do you have staying power? That’s what they say.

“You know that those [doubts] are something you face. But when you go out and show what you can do, there’s nothing anybody can say. When you help your team, when you prove you can stomp with the big dogs, what can they say?”

On the Colts’ defense, no one stomped bigger or longer than Mathis. Along with Mathis, former Colts linebacker Gary Brackett was part of Indianapolis’ 2003 rookie class.

Before becoming team leaders, they formed a bond while coming up together on special teams, “and when people would always ask me, ‘Who’s your favorite player?’ I would say that it was Robert Mathis,” Brackett said. “I can just remember being out on the field so many times, watching him get double-teamed and cut-blocked, and the play would be a screen the other way. Then you’d go back and watch the film, and you see he fought off all of that, chased down the guy and punches the ball out. It just says so much about who he was as a player.

“He just went about his work the right way. He worked out extremely hard. He prepared his body all offseason long. And he was such a student of the game. He watched film religiously to get a competitive advantage. And then once he was out there, he had what we call a killer instinct, the dog in him, whatever it is. He had the ability to flip that switch and stay on for literally 60 minutes. Some people have flashes when they’re good. He’s a guy who sustained that for the entire game.”

The strip-sack became Mathis’ signature move. No one has been better at it. Literally. Mathis has 43 strip-sacks. In 2013, Mathis notched his 40th to break the record previously held by Jason Taylor. For a defense, no play is more impactful – and for signal-callers, potentially more psychologically unnerving – than to have someone beat pass protection and dislodge the ball from the guy who directs the offense. After all, in a passing league, a quaterback’s first job is to protect the football.

“But strip-sacks, man, that can be a big field-position change. And if your team can recover [the ball], then that’s an extra possession for your quarterback. You want to give your quarterback as many chances as you can. That’s also more on the opposing quarterback’s shoulders. They think about it. It can change the whole game.”

The past few seasons, Mathis hasn’t been the game-changer he used to be. At 35, the mind is still willing. But the body, well, you know what they say about the passage of time. Mathis missed all of the 2014 season because of an Achilles tendon injury and a four-game suspension for violating the league’s drug policy. The suspension occurred, Mathis said, because he took an unapproved fertility drug to conceive a child. To repair his tendon injury, Mathis underwent 10 surgeries in a span of eight months.

In 15 games last season, Mathis showed signs of getting his game back. He regained some of his explosiveness off the edge and finished the year with seven sacks. Mathis was optimistic about completely returning to form this season. However, he has been slowed again because of diminished cartilage in his left knee, a toe injury on his right foot and a torn muscle in his left arm. He has only four sacks in 13 games — his lowest total since his rookie year. For the second straight season, the Colts (7-8) missed the playoffs. Mathis’ contract expires after the season and the Colts need to get younger on defense. When it’s time to move on, it’s time.

Of course, that doesn’t mean the Colts will be better off without Mathis in the building. As the franchise transitioned from Manning to quarterback Andrew Luck, Mathis helped provide stability from the locker room to the field. After practice Wednesday, coach Chuck Pagano made his feelings about Mathis crystal clear.

“I am forever grateful for Robert taking a leap of faith back in 2012,” Pagano said. “We came in here and talked about the position change and what he had been doing for a long, long time in a 4-3 defense, and then moving to an outside linebacker. He could’ve went another direction. Because of the man that he is and the love that he has for this organization and city and his team, he decided to ride that thing out. We wouldn’t [have] had the success that we have had over the last five years without that guy. It is a debt I cannot repay. I have the utmost respect for him, not only as a football player, but as a man, father, husband and a human being.”

Powerful stuff. And Pagano wasn’t close to being finished.

“All that he does inside and outside this building for the community, he is a warrior. They don’t make them like that,” he continued. “I wish they all had his drive and his passion, his love for the game and his toughness and durability, coachability, tenacity, resolve. Everything. Nothing was given to him.

“He earned his way into this league, and he has never taken it for granted. Not one day. He never let any of the success, or fame, or money, or this, that and the other ever get to him. He has been the same guy for 14 seasons. He looks at it as a privilege and not a right. So many times you find it the other way. I wish they all got it and figured it out like he figured it out.”

Mathis entered the NFL with a chip on his shoulder. And as he exits after achieving so much, one thought comes to mind: Any questions?