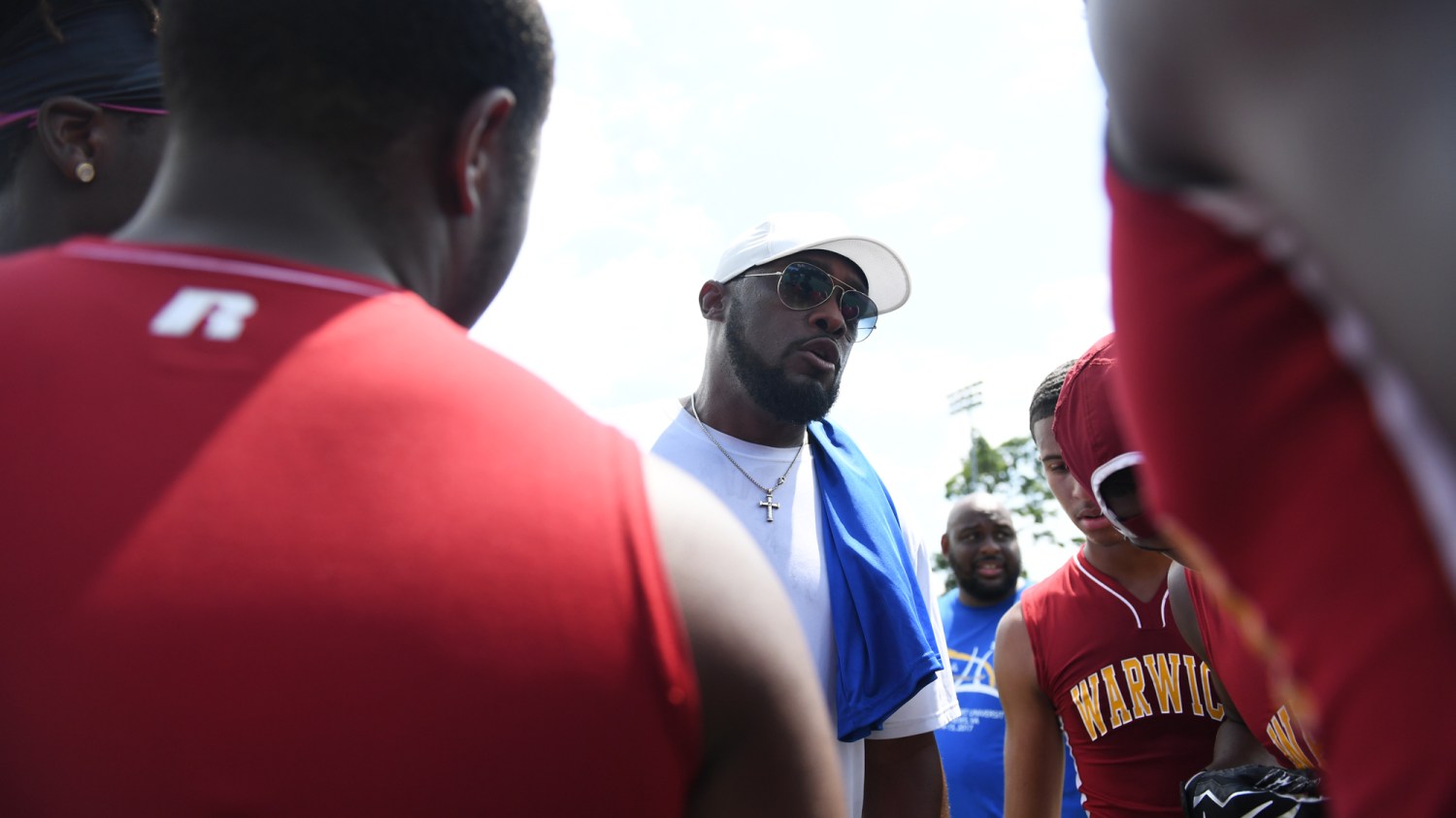 Coach of the Pittsburgh Steelers and Hampton Roads native, Mike Tomlin talks with members of the Warwick high School football team while they take part in 7 on 7 scrimmages during the Hampton Roads All-Star Football Camp on July 15, 2017 on the campus of Christopher Newport University in Newport News, Virginia. Brent Lewis/The Undefeated
NFL

For the NFL, Hampton Roads has been a pipeline for top-tier talent

Steelers coach Mike Tomlin: ‘There’s a great deal of confidence in being from this place.’

HAMPTON, Virginia — It’d clearly been a while since Pittsburgh Steelers coach Mike Tomlin had seen those red-white-and-blue Patriots jerseys.

No, not the ones worn by Pittsburgh’s AFC rival New England Patriots. Tomlin was in a place where there is no NFL stadium. He was back home in Virginia, where his eyes lit up at the sight of a group of young players donning the uniforms of his alma mater, Newport News’ Denbigh High School.

“DHS!” Tomlin yelled through a hallway of Hampton University’s Scripps Howard School of Journalism and Communications after taking part in “From the 757 to the NFL,” a panel discussion on football, manhood and the pursuit of dreams, with former NFL quarterbacks and fellow Newport News products Aaron Brooks and Michael Vick.

The NFL coach followed up his roar by approaching the high school players one by one and greeting them with strong daps that brought smiles to each of their teenage faces.

In 1990, Tomlin made the short 30-minute journey from Denbigh High to the College of William & Mary in Williamsburg, where he emerged as a four-year star wide receiver, although his talent on the field never reached the pro level. Yet Tomlin channeled his knowledge of the game into an impressive career on the sidelines, highlighted by the distinction of being the youngest Super Bowl-winning head coach in NFL history.

Now, nearly 30 years after graduating from Denbigh, perhaps Tomlin was shouting out and shaking hands with the future stars of Hampton Roads — the athletic hotbed in southeastern Virginia that produced him, Brooks, Vick and countless others. (757 is the area code for much of the Hampton Roads area.)

“I’ve known there was talent here all my life. I can’t explain it. I don’t know why that’s the case, but it’s something that I’ve always been aware of. I think anybody that’s from here is aware of that,” Tomlin told The Undefeated. “That’s why the people from here play the way that they play. There’s a great deal of confidence in being from this place, because you know that you’ve been challenged. You understand competition.”

For decades, several cities that come together to form Hampton Roads have served as a pipeline for top-tier athletes, including gold medal-winning Olympic gymnast Gabby Douglas, four-time MLB All-Star Justin Upton, Hall of Fame boxer Pernell “Sweet Pea” Whitaker and Hall of Fame NBA center Alonzo Mourning. No sport, however, has been more important to the region than football — just take a look at the 757’s pedigree of players who have not only made it to the NFL but thrived as well.

“It wasn’t until I got into the pros when I realized, like, ‘Yo, it’s a lot of guys from the National Football League that’s from this area,’ ” Vick, the No. 1 overall pick in the 2001 NFL draft, told The Undefeated. “It was just a ton of guys that was just making it.”

One player that Vick had no clue was from the 757 until he started making some noise in the NFL is former All-Pro New England Patriots linebacker Jerod Mayo, a native of Hampton — the city that reared two of the greatest athletes the area has ever seen.

“He was tough, a real good player who played both sides of the ball,” Brooks, a 1994 graduate of Newport News’ Homer L. Ferguson High School, told The Undefeated. A year younger than Iverson, Brooks had a firsthand glimpse at the Bethel phenom’s rise to stardom that got him to Georgetown University, where he became a first-team All-American point guard before the Philadelphia 76ers selected him with the No. 1 overall pick in the 1996 NBA draft. But what if Iverson, a 2016 inductee into the Naismith Memorial Basketball Hall of Fame, would’ve gone the football route?

“I’m quite sure with his heart, his desire and his tenacity he could’ve played in the NFL,” said Brooks, who led the New Orleans Saints to the franchise’s first-ever playoff win in 2000.

The prolific Ronald Curry won three consecutive football titles at Hampton High School in the mid-1990s before being named the national player of the year in both football and basketball during his 1997-98 senior year. After four years at the University of North Carolina, where he was a member of both the football and basketball teams, Curry played seven NFL seasons at wide receiver.

“Ronald Curry was the best high school football player in the history of high school sports, and I’m talking about all across the country,” said Vick, a 1999 graduate of Warwick High School in Newport News. “There was nobody better than Ronald Curry, and I’ll take that to the grave.”

“Wow, the best ever? I think it starts with Mike, but boy there’s been a lot of talent from here at the quarterback position,” said Tomlin, who had to devise game plans for both Brooks and the Saints and Vick and the Falcons twice a year as the defensive backs coach of their NFC South division foe Buccaneers from 2002 to 2005. In 2015, Tomlin and the Steelers signed Vick to back up quarterback Ben Roethlisberger, uniting the Newport News natives in Pittsburgh. (Tomlin also attempted to persuade Brooks to join the Steelers before he retired in 2007.)

“I’m unashamed about my affinity for guys from this area,” Tomlin said during the panel, in front of an audience that included players from Bethel, Denbigh, Hampton and Heritage high schools.

So, what is it about Hampton Roads that turns boys into men, high school players into NFL starters and college stars into NFL head coaches? Even the people from that area find it hard to fully explain. Yet football is seemingly an escape, through which players are driven by the pride of surpassing the talent that came before them while using the game as a tool to stay off the streets in an area with two cities, Norfolk and Newport News, ranked among the top 30 “murder capitals” in the nation in 2016.

Simply put, football in Hampton Roads is a way of life.

“This place just made us hard as a rock,” Vick said. “We go through so much. So many trials and tribulations, difficult times, growing up in the ’hood. It makes you a different person — a different player.”

A sampling of players from Hampton Roads: