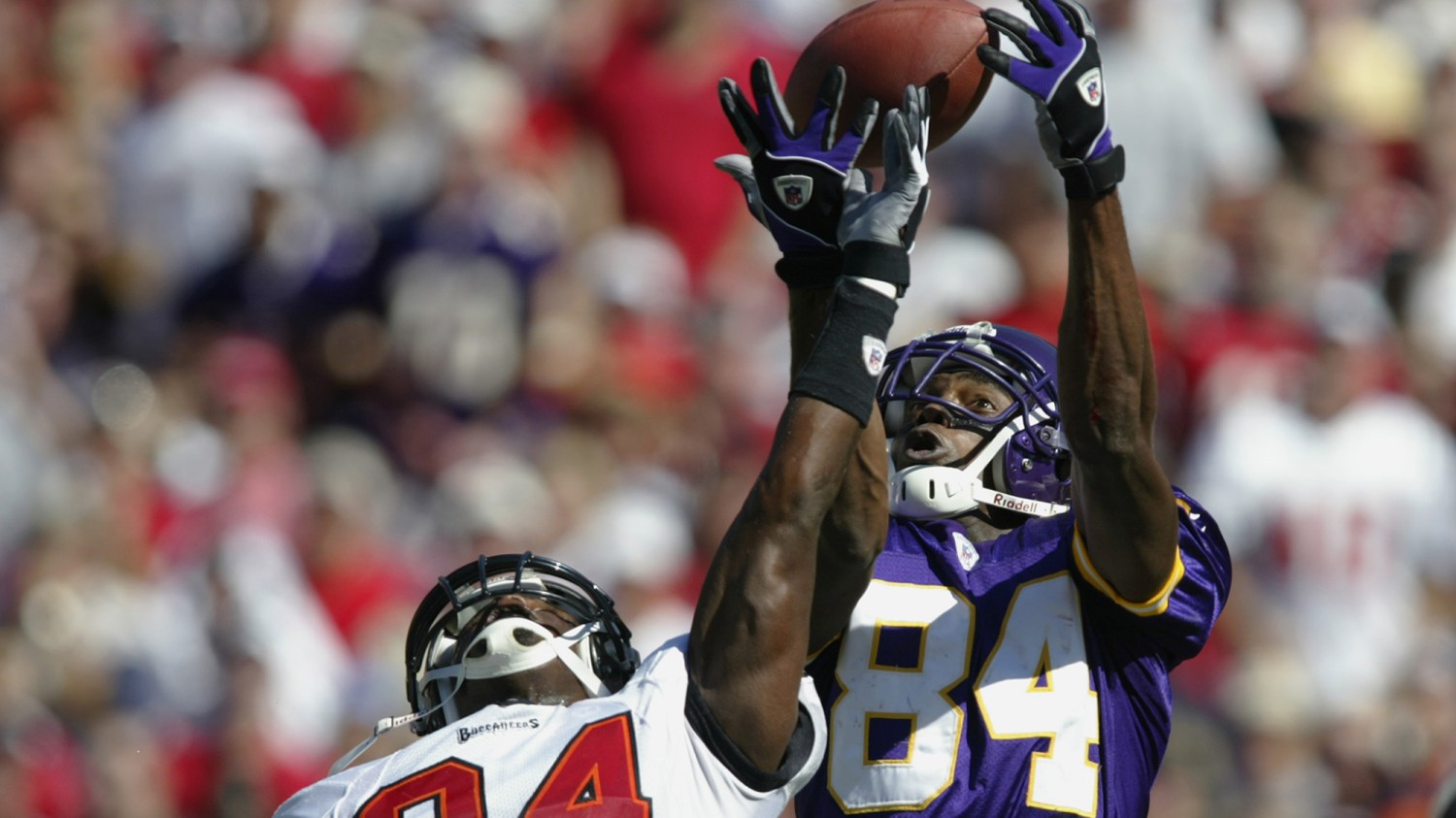 Randy Moss didn’t always need a football field to put his inhuman speed on display. All he really needed was a treadmill, and a few spectators.

During one workout at a Florida gym back in the early days of his NFL career, the young Minnesota Vikings wide receiver pushed the limit of human athleticism. His training circuit began with a 15- to 20-second treadmill sprint at 15 mph, which Moss and a friend who joined him completed with ease. Next came 17 mph. They both jumped on and, for about 10 seconds, busted out another run.

Then Moss did something crazy: He upped the speed to 19 mph. “F— that, I’m done with this,” one spectator recalls Moss’ friend saying before tapping out. Moss, however, completed the rep and kept going. He cranked the treadmill to an unfathomable 21 mph and prepared to make his move. While holding on to the rails, Moss planted one foot on the machine’s foundation and used his other foot to judge just how fast the belt circulated as he nailed his timing down. The gears in his brain synced with the mechanics of his body.

“He jumps on and whips out 21 mph, just hauling a–,” said the aforementioned spectator, Gentry Humphrey, product director for Jordan Brand at the time. “Just watching him do that, to me, he was a freak of nature … purely a super freak.”

“I just wanted to pay tribute to Michael Jordan. But at the same time, I looked at the shoes and I was like, ‘Oh, those would look good with my uniform.’ ” — Randy Moss

Humphrey can’t recall the exact date or time of year that the treadmill incident unfolded before his eyes, but he does know it took place sometime between 1999 and 2000, within the phenom wideout’s first two NFL seasons. During this period, Humphrey spent as much time as he possibly could with Moss during the process of designing Moss’ first signature shoe: the Air Jordan Super Freak.

“I realized,” said Humphrey, “that Randy was very, very different.”

In 1999, two years after Nike and Michael Jordan came to terms on Jordan Brand, Moss — then 22, and coming off a monster rookie season — became the first football player to sign an endorsement deal with the Jordan Brand. “Jordans were a basketball shoe, but when I came into the league, I was still infatuated by Nike shoes and Jordan shoes,” says Moss now. “My first year, I was just pulling Jordans off the rack and lacing them up.” And playing in them.

Remember, by this point in 1999, Michael Jordan had already retired from the NBA for the second time in his career and had shifted his focus to the business world. In his early formation of Team Jordan, His Airness wanted to branch out from creating products solely for basketball, so he signed New York Yankees All-Star shortstop Derek Jeter to represent the brand through baseball and light heavyweight world champion Roy Jones Jr. to represent boxing. For football, Moss was his guy.

“I just wanted to pay tribute to Michael,” Moss said. “But at the same time, I looked at the shoes and I was like, ‘Oh, those would look good with my uniform.’ ”

Originally, Jordan Brand’s plan for Moss didn’t include a signature shoe. Instead, he was envisioned as the face of products set to be rolled out as part of a cross-training division. Two factors contributed to a change of plan. First, Humphrey took a look at some of the NFL’s fields and the type of shoes players needed to flourish on them.

“A lot of athletes at the time that were playing on AstroTurf were using basketball shoes,” said Humphrey, who’s now Nike’s vice president of footwear for profile sports. “They were using nubby-bottomed outsoles to really get the traction that they needed on the field. I looked at it as an opportunity to create a new silhouette for training by using that nubby bottom.”

Randy Moss was too athletic, and too much of a superstar-in-the-making, to not have his own shoe.

The second factor was simple: Randy Moss was too athletic, and too much of a superstar-in-the-making, to not have his own shoe. At 6-foot-5 and 210 pounds, Moss gave defenses matchup nightmares. “With 4.25 speed in the 40-yard-dash … an impressive 39-inch vertical leap and huge hands with tentacle-like fingers that rarely drop passes,” is how The Associated Press’ Jim Vertuno put it in 1997. That was the year Moss emerged as a Heisman Trophy finalist at Marshall University with 90 catches for 1,647 yards and a Division I-A single-season record 25 receiving touchdowns. “Nobody,” Ball State coach Bill Lynch said of Moss after he caught five touchdown passes against his team in 1997, “in America can cover him.”

The Minnesota Vikings selected Moss with the No. 21 overall pick in the 1998 draft, and what the franchise quickly realized it got in him was a football player in a basketball player’s body. Before the start of his rookie season in Minnesota, Moss — a two-time basketball Player of the Year at DuPont High School near his hometown of Rand, West Virginia — flirted with the idea of trying out for the Minnesota Timberwolves and eventually playing in both the NFL and NBA. “I don’t think so,” said Vikings president Roger Headrick in June 1998. “Overlapping seasons.”

In his first year of pro football during the 1998-99 season, Moss recorded 69 catches for 1,313 yards (third most in the league behind Green Bay’s Antonio Freeman and Buffalo’s Eric Moulds) while grabbing an NFL rookie-record 17 touchdown passes, earning him a trip to the Pro Bowl and NFL Offensive Rookie of the Year honors.

“The things that he did on the field, the way he ran past people, the way he caught things,” Humphrey says, “he was like the Michael Jordan at the wide receiver position. I think that was kind of the obvious.”

After that record-setting rookie season, Humphrey and Team Jordan embarked upon the 16- to 18-month development process of Moss’ first shoe, seeking to incorporate every aspect of his life, training habits and style of play into the design. “ ‘All right, Gent! What do we got today?’ ” Humphrey remembers Moss animatedly saying in his Southern accent as he took the wide receiver through initial concepts and updated samples. “It was almost like watching a kid at Christmas … how much fun he had designing his first shoe.”

Moss knew exactly what he wanted to call the shoes he’d soon be donning on the field. “He’s the one that kind of came to us and told us that he had been given the name ‘Super Freak,’ ” Humphrey said. It was a moniker that Moss picked up during his high school days in West Virginia, and one that stuck with him through college and into the NFL.

To personify Moss’ freak-of-nature identity, especially after that otherworldly treadmill workout, Jordan Brand attempted to channel the wide receiver’s blazing speed into the shoe. Moss, in Humphrey’s mind, moved as fast as fire, leading the designer to test a metallic-sheen, flame-retardant material on the Super Freak as a unique play off the patent leather featured on the Air Jordan 11s. Humphrey, who began contributing to Jordan designs in 1990 with the Air Jordan 5, also toyed with a material worn on the uniforms and footwear of race car drivers. But because of bonding issues, neither material made it to final production. After trial and error, Humphrey finally found something with the stability and durability to match the tempo at which Moss moved.

“The great thing about someone who is so frickin’ fast is … we always found ourselves using analogies and inspiration that represented speed to show what Randy was all about,” Humphrey said. “We wanted to provide a product that could ultimately give people a piece of the Randy dream.”

By July 25, 2000, in the brief section of a St. Paul Pioneer Press story published at the start of Minnesota Vikings training camp, the last line read, “Randy Moss debuted his new cleats. The high-topped, black cleats are called the ‘Super Freak.’ They will be commercially available soon.” With the arrival of his first signature shoe, which he wore throughout his 77-catch, 1,437-yard and 15-touchdown 2000-01 season, Moss lived and breathed the “Super Freak” persona that matched his fresh new Air Jordans.

It was Jan. 6, 2001, in an NFC divisional-round playoff matchup between the Minnesota Vikings and New Orleans Saints at Minneapolis’ Metrodome. For the game, Humphrey designed Moss a custom pair of purple and yellow Air Jordan 11s, with his No. 84 emblazoned on the heel of each shoe. But everywhere Moss turned on the AstroTurf field, a different player was sporting his signature Super Freaks — from his Vikings teammates, most notably veteran wide receiver Cris Carter, to Saints opponents, including wide receivers Joe Horn and Jake Reed, as well as running back/return specialist Chad Morton.

“About eight to nine guys had my Super Freak shoe on,” said Moss. “I’m sitting there thinking like, ‘Wow.’ It was kind of overwhelming to see some of the guys with my shoe.” During an era when Jordan Brand had just begun to expand outside of hoops, Moss had sparked a cultural movement in the NFL that witnessed players taking the field in Jordan cleats on grass and Jordan basketball shoes on AstroTurf.

Yet, Moss still remains in a league of his own as the only football player in history to have his own signature Air Jordans — first with the Super Freak and then with the “Mossified,” released in 2001.

“You still got guys out there wearing Jordans, but it started with me,” Moss said. “I don’t know who it’s going to end with, but I am happy to say that I did start that trend.”