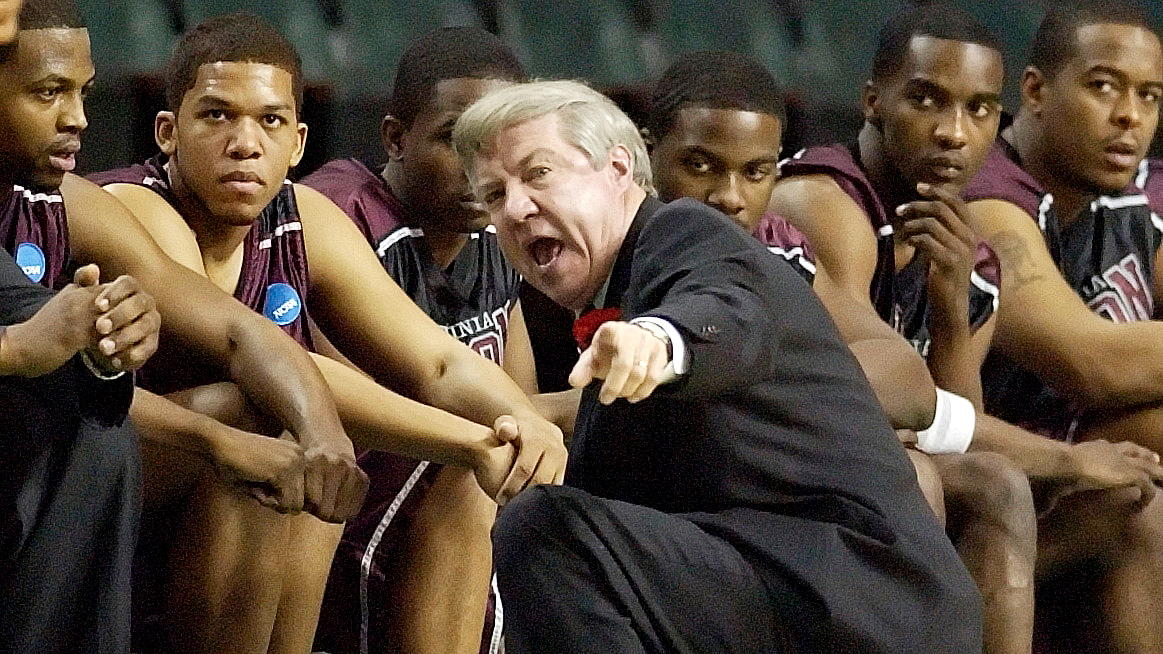 No one can deny the coaching greatness of ‘The White Shadow’

As the weather turns colder and the days become shorter, Dave Robbins becomes restless. It’s that time of year when his heart beats faster and his pulse is on an accelerated pace.

Robbins gets excited because he knows it’s time to hear the thud of basketballs hitting the hardwood. To him, the rhythmic sounds echoing off a gymnasium wall is like a symphony playing harmoniously. He loves to hear the hypnotizing tone. It’s peaceful and therapeutic.

“I can’t help it, I do miss it,” said Robbins, who led tiny Virginia Union University in Richmond, Virginia, to three NCAA Division II national basketball championships in three different decades. The man dubbed by some as “The White Shadow” walked away from coaching eight years ago. The first white coach in Central Intercollegiate Athletic Association (CIAA) history, Robbins amassed a 713-194 mark during a 30-year tenure.

He clearly misses teaching the game of basketball.

“It’s like someone who has been around horse racing all of their life,” Robbins said. “It’s a part of them. They miss the smell of the barn, the feel of the turf, the smell and feel of being around the horses. I’m a basketball coach. That’s what I did. I miss the smell of a gym. I miss seeing guys work hard to perfect their game and to work as a team. I miss it.

“As far as X’s and O’s are concerned, there’s no doubt that I could still coach. I’m not that far removed from the game. But it is a young man’s game. I realize that. The travel, the recruiting, it wears and tears on you. I don’t think I could deal with that. I’m 74 and that’s asking a lot of an old man.”

So the “old man” spends a lot of time these days with his wife of 42 years, Bunny. He also spends a lot of time playing golf. And of course he watches a few games. He’s just not strolling the sidelines eyeing referees after a questionable call while wearing his all-white suit. Robbins wore the suit during tournament championship games.

“There’s a good story about that,” said Robbins with a chuckle. “I wore a white suit when I got married in 1974. When it was tournament time and we were going for a championship, I wore the suit. I’m not superstitious or anything like that, but if I do something once and good things happen, I tend to repeat what I did. I can’t explain it. It’s what I do.”

The white suit on the white man coaching an all-black team wasn’t readily accepted at first by many in the CIAA. There were those who felt the Gastonia, North Carolina, native, who played football, basketball and ran track at Ashley High School and later at Catawba College, wasn’t worthy of coaching in the CIAA.

Robbins And HIS players were taunted

In the eyes of some in the CIAA coaching fraternity, the hiring of Robbins, who was just coming off winning a state championship at Richmond’s Thomas Jefferson High School, was taking away opportunities from African-American candidates. Clarence “Big House” Gaines openly challenged Robbins at every opportunity.

His presence in the oldest African-American athletic conference in the country may have been resented by some opponents. At Virginia Union, however, Robbins was embraced and welcomed.

“We felt like we were in a war every time we stepped on the court,” said Terry Davis, one of several players Robbins sent to the NBA. Davis spent 12 years in the NBA with four different teams. Davis’ son, Ed, is currently a forward for the Portland Trail Blazers.

“We were a family,” Davis said. “You say something bad about coach, you had to deal with all us. We loved and still love Coach. There was nothing that we wouldn’t do for him. We’d hear things. You couldn’t help but hear things. But what we would do is use that negativity to motivate us. We wanted to win and we wanted to win for Coach.”

Robbins said no one ever directly addressed him about his race and he never thought it was an issue.

“When I got the job, I didn’t realize I was the first white coach to coach in a predominantly black league,” Robbins said. “It really wasn’t anything that I thought about. All I wanted to do is coach basketball and thanks to [the late] Coach Tom Harris, who was the athletic director at the time, I got that opportunity. He called to tell me about the job being open. I know they tried to get [former NBA great and Naismith Memorial Basketball Hall of Famer] Hal Greer for the job. They tried hard to get him, but I think it may have come down to money. They even started a collection fund to get him, but it never happened. I was the second or maybe third choice, but it didn’t bother me a bit.”

What endeared Robbins to his players was his honesty, candor and high-moral character. His straight-to-the-heart-with-no-chaser approach worked to attract talent to the tiny campus on Lombardy Street.

“He didn’t tell you what you wanted to hear. He told you what you needed to hear,” said A.J. English, who spent a couple of years in the NBA before going overseas. His son, A.J. English III, starred at Iona College and led the Metro Atlantic Athletic Conference in several statistical categories, including points and assists per game, last season. He is now playing professionally in Italy.

“Coach is a good man. There’s no questioning his integrity. He’s very straight and when he has to be hard, he’s hard. Coach believes in discipline and execution,” English said. “I remember his telling me once, ‘A.J., you don’t have to be city slick. It’s OK to be country good.’ It took a minute for that to sink in, but I understood. I didn’t have to be fancy to do the job.”

It’s that straightforward, honest approach that enabled Robbins to successfully recruit players such as Charles Oakley, Ben Wallace and Jamie Waller, all of whom also played in the NBA.

“A kid knows if you’re not being honest,”Robbins said. “They can tell if you are phony. We didn’t have high-rise buildings or a scenic campus or a glamorous arena to play in. But what I would tell them is that they would work hard and get a good education. We lost some good kids that we recruited, but we also got some good kids. Overall, I think we did pretty fair.”

No CIAA team has won as many national championships as Virginia Union. The Panthers won NCAA Division II titles in 1980, 1992 and 2005. Robbins, who guided the Panthers to the championship game in 2006, has earned enshrinement in the Virginia Sports, the Catawba College, Virginia Union University, CIAA, Gaston County, North Carolina, and National Collegiate Basketball halls of fame. He’s been nominated for the Naismith Memorial Basketball Hall of Fame. He doesn’t boast about his achievements. That’s not the Dave Robbins way.

“There’s nothing in the world that I wouldn’t do for him,” said Oakley, a rugged rebounder and defender who spent 19 years in the NBA. “He has never made a big deal about himself and about what he did. That’s not him. He’s loyal and he expects you to be the same way.

“We would hear a lot of things when we went into some places. You’ve got to remember, here’s a white guy leading a black team and he was winning. Some people resented that. It was a different time, but obviously whatever he was doing was right. No one else from the CIAA has won a national championship.”

Robbins was a winner. During his stint, the Panthers won 14 CIAA championships and made 21 appearances in the NCAA tournament.

“I remember people in the stands when we played CIAA games saying some crazy things,” said Wallace, who spent 16 years in the NBA. A four-time All-Star, Wallace was also a four-time NBA Defensive Player of the Year award-winner. “Once I heard someone say, ‘Why are you playing for this white guy? We’re free now.’ When you heard things like that, it motivated you. We wanted to beat you and show you that he’s with us.

“Race was never a question with Coach. He treated everyone the same. He was a good person to play for and you wanted to do well for him.”

Some Division I schools noticed what Robbins was doing at the Division II level. He interviewed four times at larger schools, but nothing happened.

“I once had someone on the search committee at a Division I school, and I won’t name it, ask me if I could coach white kids,” said Robbins with a laugh. “I couldn’t believe what he said. I’ve coached white players. I guess he questioned whether I would have success with white players. I answered, ‘That is a stupid question. Why would you coach them differently?’ I obviously didn’t get that job.

“When you go in those interviews, guys want to hear how long it’s going to take before you win a championship. They want you to say in two years, we’re going to be champions. They expect things to happen quickly. It sometimes doesn’t happen like that.”

Honesty means a lot to Robbins. When he was coaching, he had one standing rule.

“Don’t lie to me,” said Robbins. “If I ask you a question, I pretty much know the answer, but I want to hear what you have to say. If you lie, I’ll know it. I ran a good program and I didn’t want anyone to put us in a bad light. I’d like to think that we represented the university and the city pretty well.”