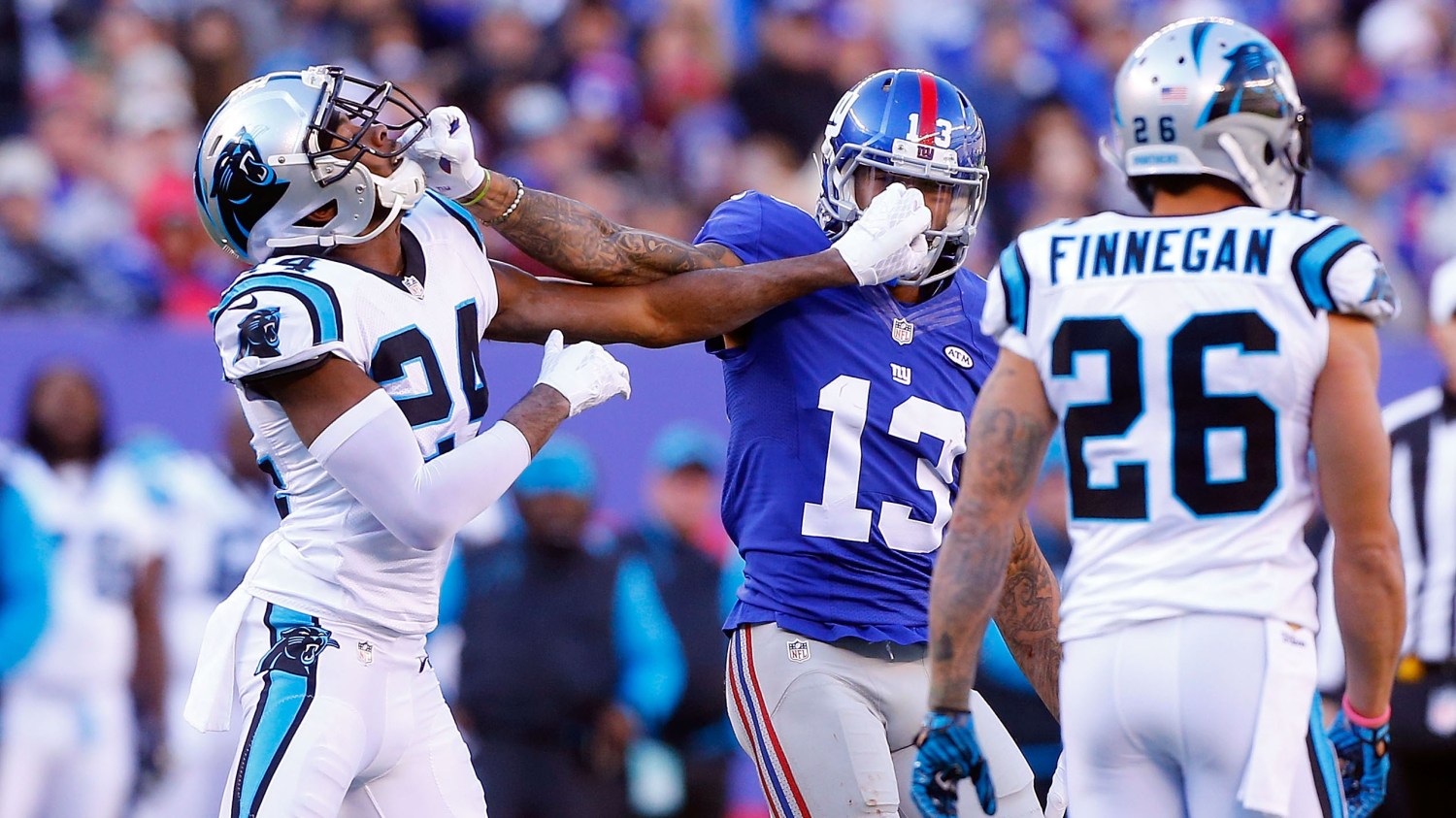 Josh Norman #24 of the Carolina Panthers and Odell Beckham #13 of the New York Giants get involved after a play during the first half on December 20, 2015 at MetLife Stadium in East Rutherford, New Jersey. The Panthers defeated the Giants 38-35. Jim McIsaac/Getty Images
NFL

The ongoing feud between the two star players has the feel of a prizefight, not a football game

Ladies and gentlemen, your attention, please. In one corner, standing 5 feet 11 and weighing in at 198 pounds, arguably the NFL’s best wide receiver and the pride of East Rutherford, New Jersey, Odell Beckham Jr. And in the other corner, a man 6 feet tall and coming in at 200 pounds, the self-described “best cornerback on Earth” and the pride of Landover, Maryland, Josh Norman. Let the rematch begin.

It’s impossible to know whether Norman-Beckham II will be a rumble, “thrilla” or overhyped dud that leaves people wanting their money back. But what’s certain is that when the Washington Redskins and New York Giants meet Sunday at MetLife Stadium in New Jersey, all eyes – including many sets from the league office – will be focused on the potential one-on-one matchup that already has the feel of a championship prizefight, not simply part of a football game between NFC East rivals.

The first Norman-Beckham encounter in Week 15 of last season (Norman was playing for the Carolina Panthers then) produced five combined penalties – three times. Beckham was tagged for unnecessary roughness, suspended for one game and enough bad blood for six Taylor Swift songs was born. Then in pure Ali-Frazier style, their feud continued offseason as they went in on each other during the offseason. Beckham told GQ in an August interview that the only reason Norman became “so relevant is because of me.” Norman fired back in a recent ESPN the Magazine cover story in which he excoriated several of the highest-profile people in the game, saying, among other things, that Beckham “lost so much respect from people for that little tantrum” he had on the sideline during the Panthers’ 38-35 victory.

When Norman bolted from Carolina to Washington (he got the biggest contract for a cornerback in league history), you just knew it was about to get lit with the antagonists potentially squaring off twice a year. Well, it’s on now.

For his part, Beckham kept it zipped all week. Reporters who cover the Redskins regularly requested to speak with Beckham and quickly realized they’d have a better chance of getting President Barack Obama on the phone.

Out of the Giants’ facility, the narrative is that Beckham learned from last season’s meltdown. He has matured. He has moved on. Beckham’s days as a pugilist, the Giants would have you believe, are over. Maybe so. Just in case they’re not, count on game officials, as well as everyone in the league office involved with handing down fines, to be on high alert whenever Beckham lines up on Norman’s side of the field.

Giants head coach Ben McAdoo acknowledged he had one of those let’s-not-have-that-happen-again talks with the superstar wideout. Exactly how did McAdoo lay it all out? “There are conversations that are had. I want to keep those private,” he said.

Mysterious enough, but is McAdoo is actually certain that this game won’t be disrupted by the players’ ongoing beef?

“It’s a one-time deal,” McAdoo said. “They’re two great competitors. They got caught up in the moment. We have to trust them and put them out there and give them a chance to compete the right way. I think it will be a great show for everyone to watch.”

Meanwhile, in the other camp, Norman spoke for himself.

Usually, the outspoken player raps with reporters in front of his dressing stall at the team’s training complex in Ashburn, Virginia. But not on Wednesday. In a sign of the times, Norman was brought into the room the Redskins use for news conferences. With seats filled and a bank of television cameras rolling at the back of the room, Norman stood at a lectern and did his best to tamp down expectations of more fisticuffs.

“A lot has been said from this week all the way up since last time we played each other, so I’m sure they’re going to be ready just as much as we are. Shoot, seems Sunday can’t get here fast enough.”

Throughout the lengthy session, Norman acquitted himself well or rather did not throw any more provocation Beckham’s way while answering a volley of reporters’ questions. He didn’t, though, shed any light on what prompted the dustup. Of course, you don’t have to be a Super Bowl-winning coach to figure out at least part of what went down. Norman is a physical corner and, as we’ve explained, he likes to talk. A lot. It’s probably as simple as this: Norman got into Beckham’s head – and Beckham responded poorly.

In the most unsettling scene from that day last season, Beckham, with his nemesis focused on a ball carrier, took off from about 15 yards away and blasted Norman with a blindside, helmet-to-helmet hit. Anyone who viewed Beckham’s act as a cheap shot assessed the situation correctly.

Pressed about his feelings regarding the Beckham hit, Norman’s eyes widened. He clenched his jaw. He leaned on the lectern. And ultimately, he maintained his cool. “God tells us to forgive all,” Norman said. “So I’m working on that.”

Star Redskins wideout DeSean Jackson could help broker peace or at least a truce. Or at least serve as a referee. Jackson is tight with Beckham (“Odell is like a little brother to me,” he told reporters who cover the Giants regularly), and he’s building a strong relationship with his new teammate. However, Jackson is steering clear of this one. That’s what you call a veteran move.

“It’s something I don’t want to be in the middle of,” Jackson said. “Their relationship is kind of rocky. So when I talk to them it’s not about each other. It’s about personal things. I try to stay out of that. And hopefully … it’s clean and it’s on the field. It’s a game we play. We’re able to take care of our families. … As long as they go out and compete, a little friendly competition, [and] hopefully it’s nothing too serious, I’m good with that.”

It’s unclear how much Norman and Beckham will face off. The 0-2 Redskins are a complete mess right now, and defensive coordinator Joe Barry seems to be among the struggling team’s biggest problems.

After Barry offered a nonsensical explanation for why he wouldn’t want Norman to shadow an opponent’s best receiver, Antonio Brown torched Bashaud Breeland, Washington’s No. 2 corner, in the Pittsburgh Steelers’ 38-16 Week 1 victory. Then late in the Dallas Cowboys’ 27-23 victory over the Redskins last week – with top receiver Dez Bryant en route to a seven-catch, 102-yard performance – the Redskins inexplicably switched gears and then had Norman follow Bryant. So, really, no one knows what Barry will do this week. Maybe he’ll leave Beckham uncovered the whole game. The Giants (2-0) would be cool with that.

“Somewhere I saw a [news report] that says I’ll be shadowing him everywhere but the slot, but it’s kind of crazy because I didn’t get the memo,” Norman said. “I don’t even know where he’s playing.”

After pausing for a moment, Norman got to the heart of it. “I don’t bow down to nobody or their thoughts of me,” he said. “I impose my will … every time I step on the football field, no matter who we’re facing. So at the end of the day, you give me your best shot.”

There’s nothing like a highly anticipated fight. It gets the crowd going. And even if one doesn’t develop Sunday, don’t worry: Norman-Beckham III is already scheduled for Jan. 17, 2017, at FedEx Field.