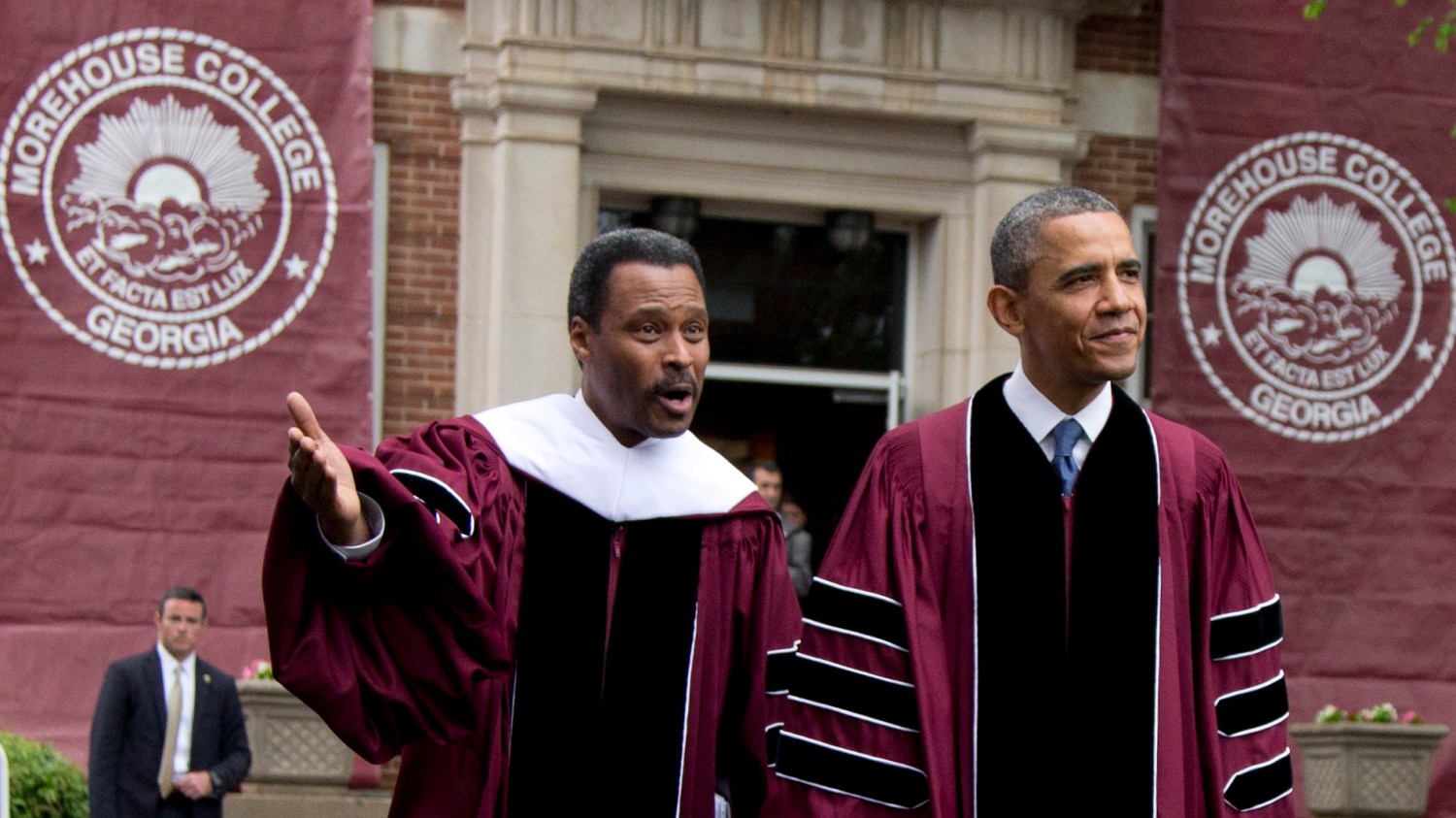 While overall federal funding has gone up, advocates say a black president should have been more sensitive to their needs

The relationship between the nation’s first black president and the nation’s historically black colleges and universities got off to a rocky start.

Just months after taking office in 2009, President Barack Obama did not push to renew a temporary $85 million pot of money earmarked for HBCUs by his Republican predecessor George W. Bush.

The move by the new president left many black college leaders indignant.

“Why is it that a recalcitrant Bush would do more for HBCUs than an ostensibly sympathetic Obama would?” wrote economist Julianne Malveaux, then president of North Carolina’s Bennett College.

The Obama administration was quick to point out that it had opted instead to put a larger sum into general grant programs that put more federal money into the coffers of the nation’s institutions of higher education — including HBCUs — while easing the financial burden on students.

Still, those increases went disproportionately to non-HBCUs. Between 2000 and 2008, HBCUs received on average 3.5 percent of federal money going to institutions of higher education. By 2013, even as the overall federal higher education budget grew, the HBCU share was down to 2.8 percent, according to the Thurgood Marshall College Fund, which lobbies for black colleges and supports students with scholarships.

It was a rising-tide-lifts-all-boats approach that has left many advocates for historically black colleges disappointed in Obama.

Few institutions have done more to lift African-Americans than the nation’s 105 HBCUs. They continue to train the lion’s share of black professionals, and boost the life chances of tens of thousands of first-generation college students.

But the schools now face what some are calling an unprecedented crisis. While some HBCUs are thriving, many have low graduation rates, high loan default rates and deep financial troubles. Since 1998, the main accreditation body for HBCUs has put 29 of the schools on warning and 20 on probation. Four schools have lost their accreditation altogether.

Meanwhile, more than two dozen HBCU athletic teams are on probation – roughly one-third of the schools sanctioned that way by the NCAA – because their players are not making adequate academic progress.

Given that array of challenges, many HBCU advocates were hoping that Obama would do more to lift their fortunes. But his focus has been on improving college access and affordability for all students, not necessarily singling out HBCUs for special help.

Not that the administration has been totally deaf to the complaints. Officials restored the $85 million program for HBCUs with great fanfare a year after letting it expire. And overall federal funding for the nation’s HBCUs is up more than $1.5 billion a year during Obama’s nearly eight years in office to more than $4 billion. That total includes a half-billion-dollar increase in direct grant money, as well as increases in federal student grants and loans.

“I know some people place a caveat on that. They say grants and loans to all colleges went up even more,” said John S. Wilson, president of Morehouse College and former head of the White House Initiative on Historically Black Colleges and Universities. “But even if you accept that, a half-billion-dollar increase in grant money to 105 institutions is not trivial.”

Still, some HBCU advocates say the new money does not compensate for the damage done by other federal policy changes that hit HBCUs especially hard.

In 2011, education officials decided to tighten federal requirements for the Parent Plus loan program to prevent families from getting in over their heads with school debt.

The result was that many students, particularly those at HBCUs, found themselves being rejected for loans and unable to pay for college. The United Negro College Fund (UNCF) estimates that about 28,000 students at black colleges — nearly 10 percent of the students at HBCUs — lost their Parent Plus loans during the 2012-13 academic year. Some were rescued by emergency grants and scholarships. Many others were forced to transfer to local community colleges or other, less expensive schools. Still others had to drop out altogether.

“We just could not believe this was happening under a black president,” said Johnny C. Taylor Jr., president and CEO of the Thurgood Marshall College Fund.

Once the administration learned about the damage being wrought by the loan rejections, officials rushed to put together an appeals process. The vast majority of students who knew how to access it were successful in reversing loan denials. But many students never knew they could have the rejections reconsidered.

Two years later, the new credit standards were relaxed. But by then the damage was done. Advocates estimate that the loan problems cost HBCUs as much as $250 million.

The new policies coincided with a general drop in college enrollment as the recession ended and some students chose to work instead. But the decline was more pronounced at HBCUs. Between 2000 and 2010, the number of students attending HBCUs increased by more than 12 percent. But they declined after that, and have yet to recover to 2011 levels despite a recent enrollment spike. That trend is similar to a decline in the overall number of black students attending college, HBCU advocates noted.

Even as HBCUs were reeling from some Obama administration policies, Congress moved to reduce the number of semesters that low- and moderate-income students can receive federal Pell grants from 18 to 12. Lawmakers also limited the use of the grants to just two semesters a year, which became a burden for students who rely on summer school to make up credits.

Those changes had a disproportionate impact on HBCUs, where nearly three in four students receive Pell grants. Many HBCU students — like many low-income students at all schools — need to take remedial courses in college, and just a small share graduate in four years.

The president often raises the problems of low graduation rates and high loan default rates when discussing HBCUs, which has irritated some advocates.

As Obama was addressing a town hall meeting in New Orleans early this year, a Southern University student asked for advice on how to contend with people who view HBCUs as second-rate.

Obama invoked the proud tradition of HBCUs and said that he did not think that people looked down on the schools. But he went on to lament the HBCUs that are struggling with low graduation rates, adding: “We don’t want a situation in which young people are taking out loans, getting in debt, thinking that they’re going to get a great education and then halfway through they’re dropping out.”

Taylor, head of the Thurgood Marshall fund, said the president’s words were painful to hear. “That was not a response a president should have given. All those things hold true for community colleges, yet he wants to double down on funding them,” he said.

Last year, Obama unveiled a plan to make community college free for students nationwide. He later amended it because of an outcry from HBCU leaders and the proposal now includes HBCUs.

Taylor noted that like community colleges, HBCUs tend to take on high-risk students: first-generation college students who are often from low-income families and low-performing high schools. While many fail to graduate, those who do often thrive. Overall, HBCUs enroll less than 10 percent of black undergraduates, but produce about 18 percent of all bachelor’s degrees earned by African-Americans, according to the UNCF. Overall, 70 percent of black doctors and dentists, half of all black engineers and 35 percent of black attorneys are HBCU graduates, according to UNCF.

While Obama has faced some criticism from HBCU advocates, he also has received praise. Since taking office, his administration has increased the size of the maximum Pell Grant, broadened loan repayment programs, and lowered federal loan costs for students. All of that has helped black students.

“HBCUs are vital engines of economic growth and proven ladders of advancement for generations of African Americans, and this Administration remains committed to supporting and investing in HBCUs,” U.S. Secretary of Education John B. King Jr. said in a statement. “While we are tremendously proud of our work to support HBCUs and their students, we recognize that there is more work ahead to ensure all students have the opportunities they deserve.”

Taylor said the Obamas missed an opportunity to boost HBCUs by not having their daughter Malia — who is set to attend Harvard next fall — be seen visiting an HBCU during her college search, as she was at universities including Columbia and Stanford.

“That would have been a huge lift,” Taylor said. “To me it was telling that his child did not tour a HBCU, at least openly.”

Still, others say that even given some missteps, the Obamas have been strong HBCU supporters. When Obama won the Nobel Peace Prize in 2009, he donated $125,000 of the prize money to the UNCF. Meanwhile, he and Michelle Obama have repeatedly spoken at black colleges. Last spring, the first lady gave the commencement address at Jackson State University and Obama spoke to Howard University graduates. And on Tuesday, he will participate in a forum on sports, race and achievement sponsored by The Undefeated at North Carolina A&T State University in Greensboro, North Carolina.

“HBCUs need champions,” said Michael Lomax, the former president of Dillard University and CEO of the United Negro College Fund. “And I can’t think of two better champions for HBCUs than Michelle and Barack Obama. My expectation is that they will be able to do even more for HBCUs once they are out of office than they did while in office.”

This article has been changed to correct the name of the Thurgood Marshall College Fund.