But she was never overmatched.

So it was no surprise to Scott Robinson, Griner’s coach at Mount Hebron High School in Maryland, that his former player kept firing away with her gun at the lone shooter who targeted lawmakers at a baseball practice even after the Capitol Police officer was shot in the ankle.

“She put it all on the line as a player, just like she put her life on the line protecting others,” said Robinson, who now coaches girls’ basketball at Howard High School. “She was mentally and physically tough as a player. And those qualities are why she’s now a hero.”

Griner was one of three officers assigned to the security detail for Rep. Steve Scalise (R-Louisiana), the House Majority Whip. Scalise had joined fellow Republicans at a park in Alexandria, Virginia, on Wednesday to practice for the annual Congressional Baseball Game when a gunman opened fire.

Scalise was struck in the hip and remained hospitalized in critical condition on Thursday night. The gunman was shot and killed.

Griner also remained hospitalized on Thursday with non-life-threatening injuries. One of the officers who helped keep the gunman at bay, David Bailey, threw out the first pitch of Thursday night’s game at Nationals Park. The North Carolina Central University graduate, who suffered a foot injury, received loud cheers as he walked to the mound on crutches.

Both Griner and Bailey continued to be hailed as heroes after protecting the lawmakers by exchanging fire with the gunman in the early morning shootout.

Griner grew up in Ellicott City, Maryland, and attended Mount Hebron High School, where she played both basketball and softball.

As a softball player, Griner was an honorable mention All-Howard County outfielder. In basketball, she was a starting forward on a team that won the 2002 Howard County championship.

“She played inside for us, like a Charles Barkley-type player because she wasn’t big,” said Robinson, her coach at Mount Hebron. “She was tough, a good rebounder, and had great hands. She was extremely physical and an integral part of our success.”

As she helped Mount Hebron win that Howard County title her senior year, Griner was coping with tragedy. Just before the school year began, her mother died after a long bout with cancer.

“I just remembered her being so strong in dealing with her mother passing,” said Irene Bademosi, a guidance counselor at Mount Hebron. “Some students, in losing their parents, would completely fall apart. It was tremendous the way she handled her setback.”

Julie Napolitano, a high school basketball teammate, recalled Griner’s tough demeanor on the court being a contradiction to her off-court behavior.

“She would dig down and grind when you needed it during the game, and then off the court she was a soft-spoken person who didn’t draw a lot of attention to herself,” Napolitano said. “She was always the person who would look to see what she could do for other people. So it doesn’t surprise me that she was the one out there saving people.”

From Mount Hebron, Griner went to Hood College, a Division III school in Frederick, Maryland, where she played basketball for two years. She had a strong freshman year, averaging 10.1 points and 5.6 rebounds while starting 21 games in 2002-03.

Her numbers dropped as a sophomore (4.3 points per game, 4.3 rebounds per game), which was Griner’s last year of college basketball.

“Even once her career was over, she was extremely supportive of the program and the players who followed her,” said Tracey Franklin, who became coach of the Hood College team the year after Griner left the team. “She was an incredible young woman with a very caring way about her.” 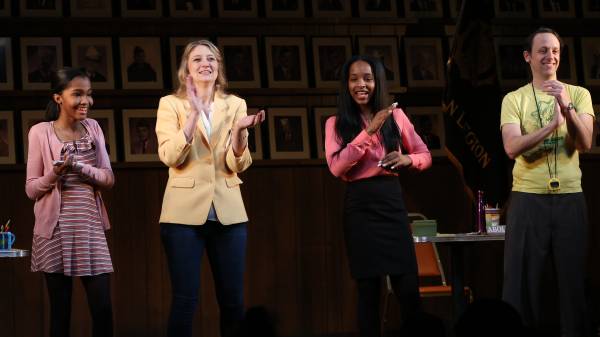 What the Constitution means to us Read now

Griner majored in biology and graduated from Hood College in 2006.

Franklin, who is now the principal at Walkersville High School in Frederick, said she’s happy Griner was able to be in a position to prevent a more serious tragedy.

“I am relieved to hear Crystal is doing well and was not more seriously harmed,” Franklin said. “Her service in this tragedy is truly heroic and inspirational.”