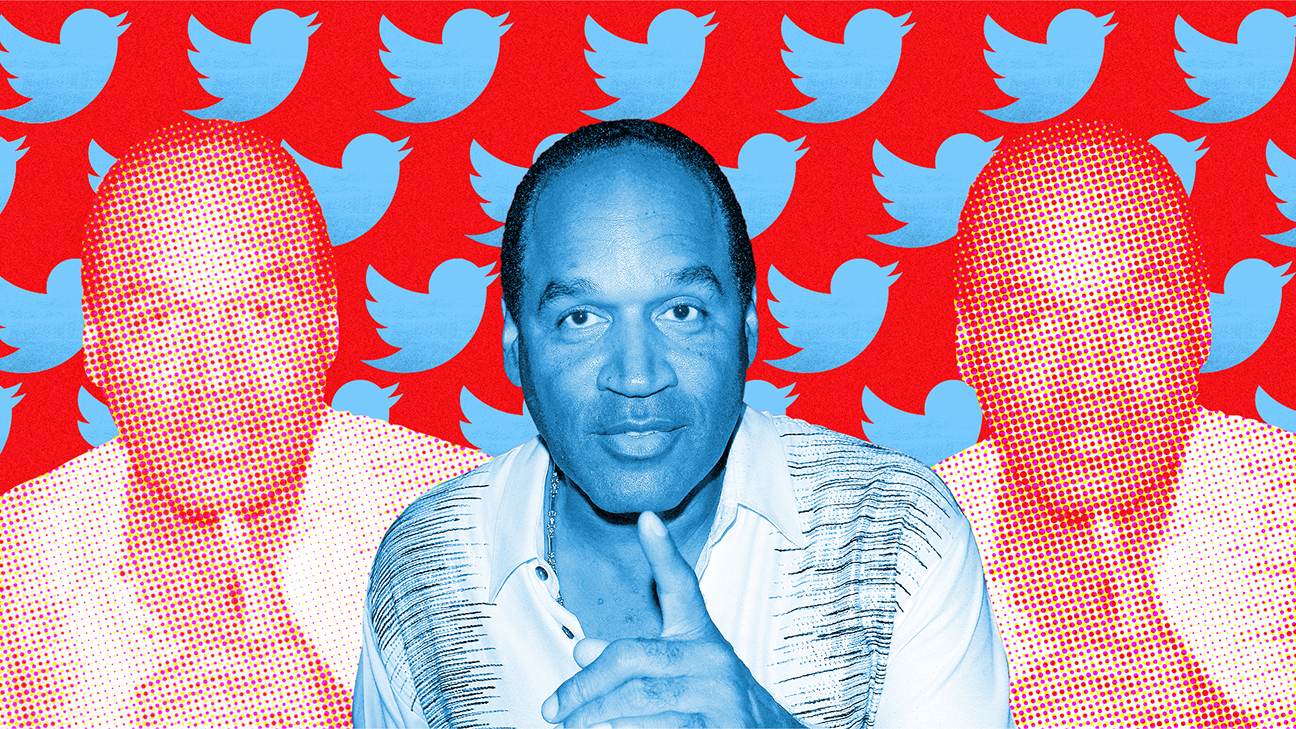 O.J. Simpson created his account in June, his topics have been on-brand and peculiar. He has more than 912,000 followers. Of the 24 accounts he follows, most are sports-related, such as television networks, his former teams and, ironically, the Heisman Trophy.  ESPN Illustration
Social Media

For a man who’s been famous most of his life, and loathed for the last quarter century, abstaining from public notoriety was never an option

Listen to the article, narrated by Justin Tinsley.

The 72-year-old former tailback now spends his days filter-free at Las Vegas golf courses, restaurants and presumably his place of residence, waxing poetic about the world from his Twitter handle @TheRealOJ32. “If you don’t see it here,” his Twitter bio reads, “I didn’t say it.” His account is unverified, although the disturbing charm in his tagline — “Hey, Twitter world. It’s yours truly.” — essentially serves as his own blue check.

He has more than 912,000 followers. Of the 24 accounts he follows, most are sports-related, such as television networks, his former teams and, ironically, the Heisman Trophy. Simpson also keeps timeline tabs on running backs Barry Sanders, Adrian Peterson, Eric Dickerson, Chris Johnson, Jamal Lewis and Terrell Davis.

“I laughed for 20 minutes when I found out O.J. joined Twitter. If you ever wanted to know when it’s time to leave Twitter, this was it,” said comedian Roy Wood Jr. “It’s like when your mom added you on Facebook and you were like, ‘I want to avoid that nonsense.’ ”

Welcomed or not, since Simpson created his account in June, his topics have been on-brand and peculiar: the Democratic presidential debates, fantasy football, free speech, Los Angeles Chargers running back Melvin Gordon’s holdout, trolling the Miami Dolphins’ front office and more.

Just last week, Simpson filmed himself at a golf course offering wide receiver Antonio Brown legal advice that would’ve been hilarious if it weren’t so sobering. More than 1.6 million people watched him say, “They told me that when you’re in a civil or criminal litigation, and you’re the person they’re coming after, the best thing you can do is say nothing. Be quiet. Essentially shut up.”

Like his critique of Brown, Simpson’s most interactive tweets come when he addresses polarizing sports topics. Especially when he aligns them with his imploding fantasy team that features the recently retired Andrew Luck (and Brown).

“You could have retired an hour and half ago, before I picked you in my fantasy picks. I mean, what did I do? I’ve been a fan of yours. Why would you do this to me? Come out of retirement,” Simpson told Luck on Aug. 24. The Luck tweet received 5.7 million views, 65,582 likes and 15,363 retweets.

Simpson uses Twitter by forgoing 240 characters for his own face. Watching his videos is an experience in moment-by-moment contradiction. He’s still charismatic. He’s as natural in front of the camera now as he was doing NFL sideline coverage or as Detective Nordberg in the Naked Gun comic film series alongside actor Leslie Nielsen. But you’re still reminded of what he’s done and what he’ll always be accused of doing.

His account is unverified — although the disturbing charm in his tagline — “Hey, Twitter world. It’s yours truly.” — essentially serves as his own blue check.

“He’s used Twitter almost exclusively for video content. It tells me a lot about how O.J. conducts himself in the public eye,” said Saida Grundy, assistant professor of sociology and African American studies at Boston University. “It’s as though he’s auditioning to get back to being a sports commentator. He’s like, ‘This is my second wind, right?’ ”

As history has revealed, with Simpson, what’s seen in public is impossible to discuss without an examination of his personal life. Nearly 24 years have passed since Simpson was found not guilty for the murders of his ex-wife Nicole Brown Simpson and her friend Ron Goldman in 1995. Eleven years have passed since his conviction for armed robbery and kidnapping in Las Vegas. In October 2017, he was released from Nevada’s Lovelock Correctional Center.

Since then, Simpson has lived a tame life. And now it feels like he’s campaigning for reconsideration. As if he wants to make the social media generation question everything written and reported about him since 1994. Did I miss something? This is why he was so beloved?

“I don’t think a network is going to touch him,” said Jaia Thomas, a sports and entertainment lawyer based in Los Angeles. “I do think this is his way of positioning himself to do something else in sports or entertainment, but it’s going to have to be something he self-starts.

“Aside from his criminal activity, we can’t deny the fact that he is a personality. He does have that exuberance to him that can easily attract folks to follow him. Sometimes it just doesn’t take a lot for us to forget someone’s past, or to overlook them, for a 30-second video.”

Wood added: “He knows the game of football, he still might be able to tell you which wide receiver is gonna have a good game, but it ain’t gonna lead to [him] sitting next to Chris Berman and Tom Jackson breaking down games. O.J. needs to lay low.”

As Simpson stutter-steps his way through his curated timeline, it becomes clear that for a man who’s been famous most his life, and loathed for the last quarter century, abstaining from public notoriety was never an option.

Simpson uses Twitter by forgoing 240 characters for his own face. Watching his videos is an experience in moment-by-moment contradiction.

“I don’t think O.J. exists outside of the white public gaze, and he can’t stay away from that adoration,” said Grundy. “And when you have such an unrepentant history of domestic abuse in your private life, you rely upon the public to create the counter to that image. He still needs us to believe he’s the character called O.J. Simpson.”

Simpson didn’t construct this character all by himself, of course. American culture is obsessed with celebrities, and the nature of that obsession has changed since Simpson’s famous trial. The journal Cyberpsychology published a study stating that the thirst toward celebrity culture shifted between 1997 and 2007, credited to the expansion of the internet. In 1997, fame was ranked 15th out of 16 values when studying the sitcoms that 9- to 11-year-olds deemed popular, such as Boy Meets World and Sabrina the Teenage Witch. A decade later, in shows such as Hannah Montana and American Idol, fame was the dominant value. Following it were achievement, image, popularity and financial success.

So the ground was already fertile for Simpson to flourish. An award-winning TV series (FX’s American Crime Story: The People vs. O.J. Simpson) and documentary (ESPN’s O.J.: Made in America) both took his name through the ringer. More than 3.4 million viewers watched the premiere episode of Made In America, proof that the appetite for “The Story of O.J.” is insatiable. And Simpson has no issue satisfying the demand.

Simpson’s Twitter account gained followers even as the debate around “cancel culture” has heated up — a conversation Simpson has been tied to well before the phrase became a permanent part of the public lexicon. In essence, this is the act of getting someone out of the paint or stripping a celebrity of their cultural cache. The idea has existed for decades, although the practice has come under debate as celebrity transgressions, both past and present, frequently play out on social media.

Criminal accusations against R. Kelly and Bill Cosby, for instance, barely scratched pop culture’s surface for years — until the Surviving R. Kelly docuseries released in January and a joke about the allegations against Cosby from comedian Hannibal Buress helped turn the tables into legal action.

Being canceled via social media doesn’t always equate to professional cancellation, though. Director Woody Allen continues to finance his own projects despite a decades-long allegation of sexually abusing his adopted daughter. Or witness the continued debate around Michael Jackson after the documentary Leaving Neverland detailed Jackson’s alleged sexual abuse of two boys. Some believe it’s character assassination of a dead icon. Others grapple with rethinking everything they thought they knew about a man whose music defined multiple generations. “Cancel culture is not really canceling anyone,” said Grundy. “O.J. is not canceled, and he knows that.”

Wood makes a similar point: “O.J. Simpson has been canceled, re-canceled and triple-canceled and he’s just oblivious to it. He doesn’t acknowledge it,” he said. “If you ever wanted proof that you don’t necessarily have to obey cancel culture, it’s O.J.! O.J. just walks right back in like, ‘Nah, no big deal.’ ”

As Simpson continues to experiment with Twitter, what he won’t find is wide-scale empathy — if that’s a treasure he seeks. It seems unlikely that we’ll ever collectively decide to let bygones be bygones for Simpson. That would require that he acknowledge his past. At this point, there are 900,000 reasons that it’s difficult to envision he ever would.