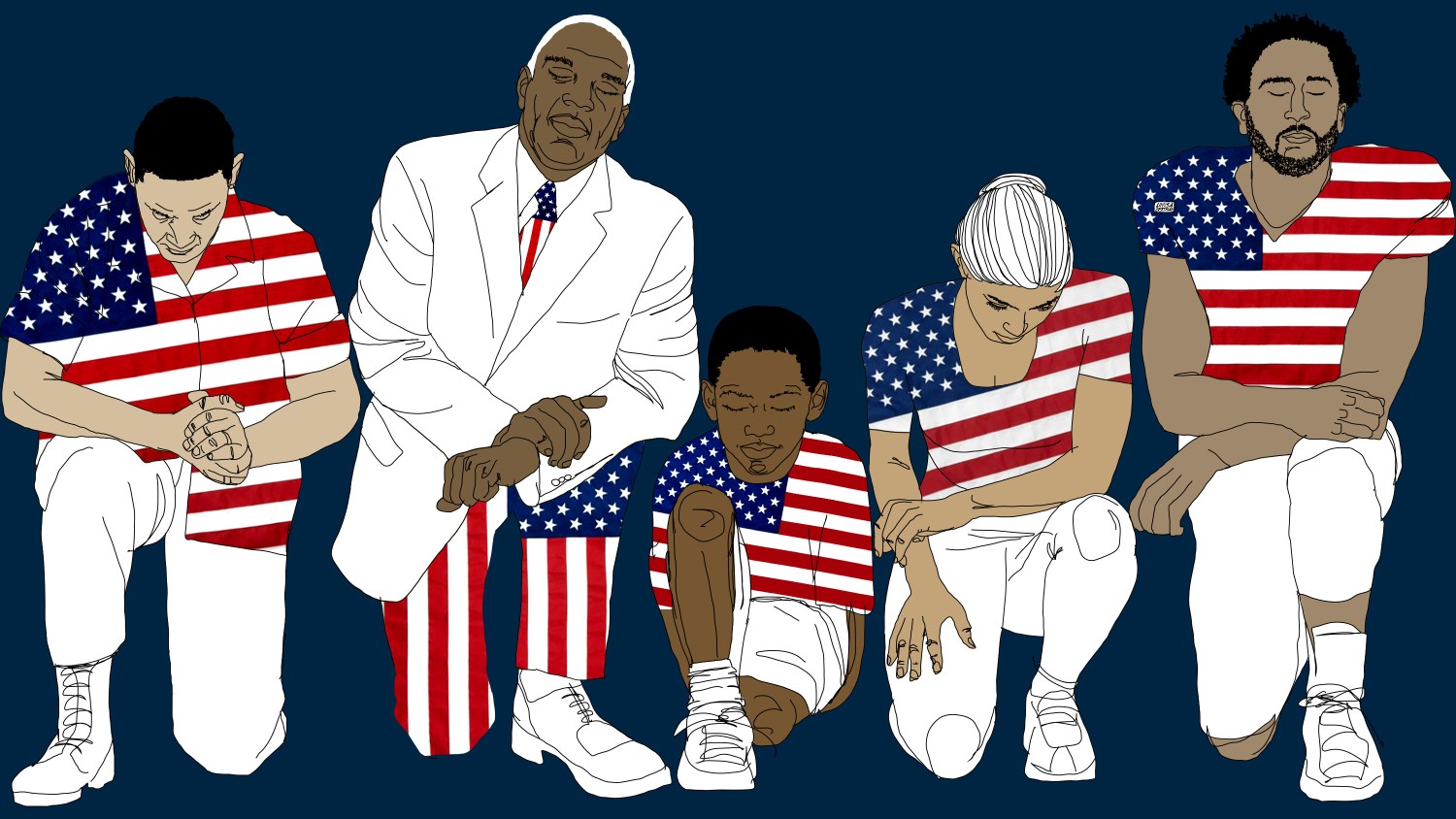 On Flag Day, the most patriotic among us should be kneeling

— Woody Guthrie from “This Land Is Your Land”

With Memorial Day behind us, Flag Day next week and Independence Day next month, I’m reminded of my grandfather, Elzie Bowman. Born in the 1880s, he was too young to fight in the Spanish-American War and too old to fight in World War I.

Like many people who were never tested in battle, grandpop loved to wave our nation’s flag. This time of year, he decorated our homes with flags: In the 1950s and early 1960s, he festooned our North Philly home with little flags he placed in window boxes or a white planter; in the late 1960s and early 1970s, he unfurled a larger flag that flapped majestically in the wind from our front porch in Southwest Philly.

He loved his country. And he was willing to forgive our great nation its many transgressions without question, again and again. And he had little patience for those who’d sought to change or debate the status quo: “What are you,” he’d thunder, “some kind of red?”

Fifty years ago, my grandfather spoke in a Midwestern rumble that reminded me, vaguely, of that of Walter Cronkite, a CBS TV anchorman. Like grandpa, Cronkite hailed from Missouri, the Show Me State.

There was no way to show my grandfather that questioning the government and protesting against its failures and follies, at home and abroad, was an essential part of challenging, strengthening and sustaining America, even though the First Amendment protects protest, just as it does the press, which he loved. My grandfather waved the notion of protests away, especially protest against the Vietnam War, as if it were an insistent fly buzzing around his head.

Consequently, if my grandfather, a tireless sports fan, were alive today, it’s likely he would dismiss the NFL players who kneeled during the playing of the national anthem to protest police misconduct and societal inequality.

I don’t know about you, but I’ve found the nation’s most fervent and meaningful flag-wavers fighting for social justice, in the streets, the courts and the voting booths.

I don’t know about you, but I’ve always numbered change agents such as Frederick Douglass, Rosa Parks, Martin Luther King Jr. and Cesar Chavez among the nation’s greatest patriots.

I don’t know about you, but I’ve always thought of Woody Guthrie’s “This Land Is Your Land” as a national anthem that had blessed America and spurred Americans to act in the name of justice and freedom, from sea to shining sea.

The kneeling NFL football players have stood tall for freedom and justice in this great land for you and me. Ex-NFL quarterback Colin Kaepernick and those who have followed him have been among the standard-bearers for the nation’s highest and most enduring ideals. Some, even those who will proudly display the flag during our most patriotic holidays, forget how important protests, especially those of the dispossessed, have been in making and keeping America great.

Last month, NFL officials put the finishing touches on an agreement with players that committed $89 million to a social justice platform. But the bosses and the people who boss the bosses for the NFL also ruled that before games, NFL players must stand for the national anthem on the sidelines or stay in the locker rooms when it’s played. Failing to comply with the new rule, which was instituted without talking with the players, could result in fines. The two league actions form a latter-day Missouri Compromise aimed at maintaining the balance of power between team owners and players, just as the original Missouri Compromise sought to balance political power between Southern and Northern states during the long run-up to the Civil War.

Today, the NFL and the nation live in what Abraham Lincoln called a house divided. Who knows if, when, where and how NFL players will protest next season? But when they present ways to wave the flag for justice in America, whether it’s kneeling on the sidelines or standing tall in their communities, let’s stand ready to salute them.