One year after the bubble, the NBA’s COVID-19 response is helping the world understand the pandemic

A new study of COVID-19 transmission using data from the NBA shows that the league’s grand “experiment” in epidemiology that allowed it to successfully complete two seasons is now providing important medical insights for the rest of the world.

Because the NBA’s population is overwhelmingly healthy and young, it provided a great study group – close to an “all things being equal” approach, in which scientists could focus on the differences between virus variants rather than having to account for a wide variety of preexisting health conditions (as in a study of the general population). And as schools reopen and the delta variant spreads, the research based on NBA players provided a great way to get a clear read on several current questions surrounding the transmission of the virus.

The NBA’s fight with the coronavirus lasted until the very end of the season. For example, one of the more humorous celebratory moments was a video call between Giannis Antetokounmpo and his brother Thanasis, who was not present for the closeout game in the NBA Finals because he was quarantined after entering the league’s health and safety protocol (along with some members of the Milwaukee Bucks staff) before Game 5. While the event was lighthearted, it demonstrated how the fear of an outbreak was an issue throughout.

And while there were several instances of players and personnel entering the league’s COVID-19 protocol during the 2020-21 season, there were no work stoppages. The NBA, at least from one perspective, had conquered the coronavirus again, this time without the famous bubble in Orlando, Florida. What began as an experiment in epidemiology became a legitimate scientific operation. 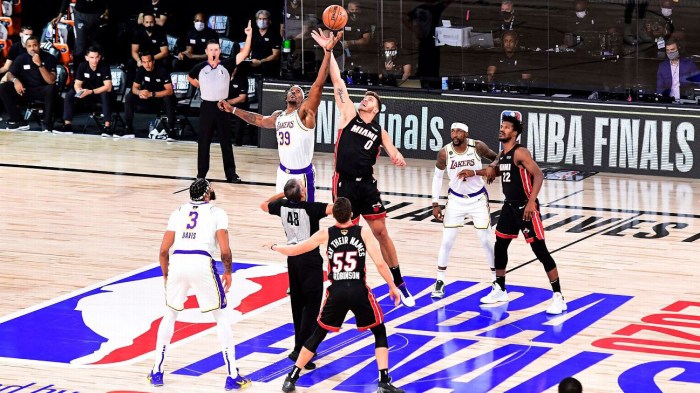 How the NBA conquered COVID-19Read now

As the 2021 NBA summer league games began, there were several big questions about the state of the pandemic. One involves the contagiousness of the delta and other variants. And while vaccinated individuals are less likely to become seriously ill from COVID-19 than vaccinated individuals, questions remain about “breakthrough infections,” when vaccinated individuals become infected, as in the case of Chris Paul during the 2021 Western Conference finals. These unknowns raised questions about how to safely reopen schools and sports leagues, about when to recommend social distancing and masks as preventative measures, and how vaccination status should influence these decisions.

The new study, led by scientists from the Yale School of Public Health, the Harvard T.H. Chan School of Public Health and others, used data from the 2020-21 NBA season (comprising nearly 200,000 samples) to address these and other questions, with large implications for how the world – and not only the NBA – thinks about the pandemic moving forward.

“Is there a better-sampled cohort than the NBA? I don’t think so,” said Joseph Fauver, associate research scientist in epidemiology at the Yale School of Public Health and one of the co-lead authors on the study. “I can’t say enough about how great this partnership has been because it’s data that as far as I know, it doesn’t really exist anywhere else. And they have been willing to not only use the data for their own health and safety protocols, but to do the greater good.”

Fauver said that one major focus of the new study was the question of why one variant is more transmissible than another. “And one clear hypothesis is that a more transmissible variant would generate higher viral loads more often, as indicated by the peak viral infection. If you’re walking around with more virus in your system, you may be more likely to transmit that virus to someone else for a longer period of time,” he said.

The study examined whether this hypothesis held up by measuring the amount of virus in samples from NBA players, and comparing any differences between the amount of virus generated by the variants of interest (e.g., alpha, delta) vs. the original (“pre-alpha”) variant that was the initial cause of the coronavirus pandemic. The results suggest that even though the delta variant is more transmissible, it does not generate more viruses in infected individuals.

“If you look at the averages between variants, they don’t really seem to differ that much,” Fauver said. “There was an expectation that peak viral load for delta might be a bit higher. But looking at statistical differences across them, there doesn’t really seem to be any.”

This is a landmark finding, as it implies that the means through which the delta variant achieves greater contagion is something other than generating more viruses in infected individuals.

And so, the findings both support the notion that vaccination remains an important and effective means of decreasing transmission, and provide a more detailed picture of how fully vaccinated individuals can still carry and transmit the delta variant. Consequently, it would be wise to reconsider our public health approaches to prevent another large wave of infection as we enter the latter months of 2021 and people spend more time indoors.

Nita Bharti, an epidemiologist at the Center for Infectious Disease Dynamics at Penn State University who was not involved with the study, says these new findings “make it clear that pharmaceutical interventions like vaccines are one important tool in pandemic response but can’t and don’t stand alone. We need to continue to lean heavily on behavioral interventions, including reducing contacts to limit transmission, even among vaccinated individuals, and using masks and distance to reduce transmission to our contacts.”

While the findings themselves may bolster our efforts to stymie transmission, this study further emphasizes the success in the NBA and the National Basketball Players Association’s (NBPA) pro-science approach.

“Since March 2020, the NBA made a few bold decisions and implemented good public health measures before our political leaders did,” Bharti said. “The early cancellation of games was an important and a critical component in public health messaging regarding the seriousness of this pandemic.”

The NBA’s success was rooted in a strong relationship with the NBPA. Because of this, the NBA has avoided a lot of the public controversy and discord that has accompanied vaccination and disease prevention in the NFL. And now, the rest of the world is benefiting.

What can the world learn from the example that the NBA and NBPA have set? In light of current debates around the reopening of schools, Bharti hopes that “we can take what we learned from the NBA and the valuable data from these players and set up something that can protect our students and the rest of our communities at a fraction of the cost. The NBA has helped us learn what the risks are and what they aren’t.”

C. Brandon Ogbunu, a New York City native, is a computational biologist at Yale University. His popular writing takes place at the intersection between sports, data science, and culture.