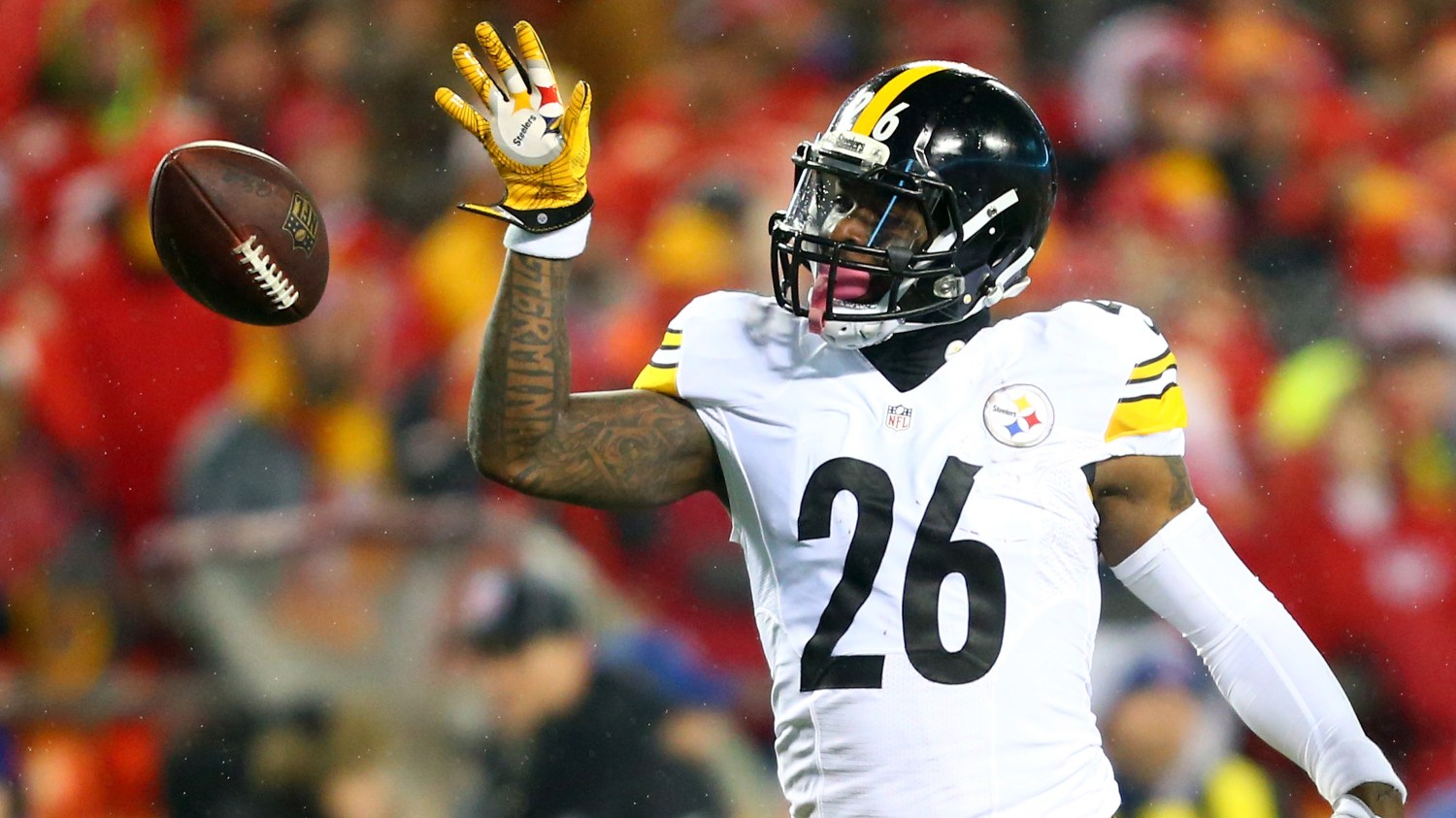 Running back Le’Veon Bell #26 of the Pittsburgh Steelers tosses the ball forward after gaining a first down against the Kansas City Chiefs during the first quarter in the AFC Divisional Playoff game at Arrowhead Stadium on January 15, 2017 in Kansas City, Missouri. Dilip Vishwanat/Getty Images
NFL Playoffs

We’ve come to learn that it’s Le’Veon Bell who poses the biggest threat to Le’Veon Bell. On the field, there is no denying that the Pittsburgh Steelers running back is stunningly talented. His decision-making is superb. With a ball tucked under his arm, he is mystifyingly hard to stop. Off the field, well, maybe, not so much. But even with Bell’s early career and early season missteps, there’s still no telling how far the self-proclaimed “Steph Curry of Football” can go in the NFL. Bell is just that good. Pittsburgh – and more importantly, the Patriots – know it. If you don’t know it, here are some in-your-face reminders courtesy of the man himself.

The past two weeks, Bell has never been more focused. Or more productive. The Steelers are one step from another Super Bowl, largely because the NFL’s most versatile runner is on a record-breaking run. Two postseason games, two new Pittsburgh postseason rushing marks set by Bell. He’ll attempt to make it 3-for-3 Sunday against the New England Patriots in the AFC championship game. It’s going to be fun watching the Patriots try to stop Bell. Certainly, the Miami Dolphins and Kansas City Chiefs thought they had it figured out.

Bell ruined Miami’s first playoff experience in eight seasons. His 167-yard, two-touchdown performance powered the Steelers’ 30-12 blowout victory. In his first playoff game, Bell bumped aside Hall of Famer Franco Harris, who rushed for 158 yards during the Super Bowl following the 1974 season — eclipsing a number that has set the standard for 42 years. Dolphins just got caught completely unprepared for what Bell hit ’em with that day.

On Pittsburgh’s third possession, it ran 10 plays. The Steelers handed the ball to Bell on all of them. You read that right: One possession, all Bell. He gained 78 of the 83 yards on the drive (Miami’s offside penalty accounted for the other five yards), finishing with a one-yard touchdown run. Overall against Miami, Bell had 29 carries. Afterward, the talk among players in the home locker room at Heinz Field was that perhaps the Steelers should have fed Bell more. “That’s what he wants,” guard Ramon Foster said. “Let’s keep it going. Pull him out when he needs to be pulled. But as long as he wants it, let’s continue to get him the ball.”

Throughout the game, Bell pushed that line of thinking with Steelers coaches. “I’m looking at the sideline telling them, ‘Just keep it coming.’ ”

They heard him. In the next round against Kansas City, Bell was even more important. Especially since the Steelers didn’t produce a touchdown in the 18-16 road win. With 170 yards on 30 carries, Bell topped his 1-week-old record while also helping the Steelers achieve an almost nine-minute advantage in time of possession. Bell’s dope two-game total: 59 rushes, 337 yards (a 5.7-yard average) and two touchdowns.

In the 2016 season, Bell has completed a Steelers record trifecta. Back in early December, he had 236 yards rushing against the Buffalo Bills to take Willie Parker’s place atop the Black and Gold’s list for most yards rushing in regular-season game. And at only 24, Bell still has young legs. It’s fair to question, though, whether the Steelers have put too much on his shoulders. After all, he was the key down the stretch when the Steelers won the AFC North and is averaging 29.5 carries in the playoffs. That’s a whole lot. The Steelers are confident the number is just right. “Everybody asks” about Bell’s workload, Foster said. “Everybody asks, ‘Is it too much? Is it too much for him to handle.’ He loves it.”

The Steelers are all in on Bell going full speed. They just need him to recognize when it’s time to slow down. The past two seasons, Bell has served suspensions for violating the league’s substance-abuse policy. After being selected as a first-team All-Pro during only his second season, Bell was arrested in August 2014 with then-teammate LeGarrette Blount on DUI and marijuana possession charges. Because of the suspension and season-ending knee surgery, Bell played in only six games in 2015. Then in August 2016, Bell stumbled again. He was ineligible to play in the Steelers’ first three games this season for, he stated in an apology on Twitter, missing a random drug test.

Once he finally got back on the field, Bell balled out. He started off right in his Week 4 debut, gaining 144 yards on only 18 carries in a 43-14 win over the Chiefs. Bell rushed for 1,268 yards (with a 4.9-yard average) and scored seven touchdowns. He was great for quarterback Ben Roethlisberger in the passing game as well. Bell had 75 receptions, ranking second in the league among running backs. His 1,884 yards from scrimmage – in only 12 games – were the NFL’s third-highest total. Pittsburgh has won nine straight. Over that span, Bell is averaging 146.5 yards rushing.

A second-team All-Pro selection this season, Bell still has significant support in the locker room. Teammates past and present vigorously defend him. They really like him. That definitely comes through. Loudly.

ESPN analyst Ryan Clark remembers how Bell immediately impressed as a rookie in 2013. Clark, who was entering his final season as a Steelers safety, quickly realized that Bell, drafted in the second round out of Michigan State, would be special, “and also that he’s a good kid. He’s actually a good dude. He’s not a troublemaker. He’s not a guy who you have issues with, like partying all the time. The mistakes that he has made, you can fix them. And since he came back this year, he has stayed out of trouble.”

However, Bell’s past is still on record. As great as Bell has been, he isn’t signed beyond this season. You have to think that the Steelers are taking a wait-and-see approach because of, well, of everything. That’s understandable. For the Steelers, here’s what wouldn’t make sense: Losing Bell in free agency. To say the least, it would be highly difficult to replace what he does for their offense. If not downright impossible.

“He’s the cornerstone of an organization,” Clark said. “It’s turned into such a quarterback league, but for as much as a running back can be in this day, he’s the franchise. Since he’s been back, even as compared to Ben, there’s been no person who’s had a greater impact on the Pittsburgh Steelers’ offense than Le’Veon Bell.”

No one’s better at analyzing running back play than ESPN’s Merril Hoge. When Hoge breaks down game film of Bell, he sees – by far – the best all-around player at his position in the league. Bell methodically attacks or “presses” the hole. The four-year veteran possesses a rare combination of vision, patience and footwork that enables him to remain in motion while providing time for the Steelers’ offensive line to engage the defense.

Once Bell picks his spot, he “slides and darts in a hole quicker than anybody I’ve ever seen,” Hoge said. “He slides, slides, slides – then darts through it and explodes. He’s helping his linemen, too, get movement with the double-teams. His patience is a unique style. It’s just an instinctive gift he has. You can’t teach what he does.”

“He’s going right, but he’ll look off all the way to the left. His head movement is really good. That’s what defenders study, too. They think, ‘Is he looking in the hole? Is he looking outside?’ He finds where they’re aligned and goes about it [setting up defenders]. Once he’s gathered the information he needs, he’s ready. He’s just so smart pre-snap.”

Listening to Hoge, you quickly realize how much he admires Bell as a player. Hoge also likes Bell personally. At an awards ceremony back in 2014, Hoge had a good talk with Bell, “and if you would have told me that anything else would happen [off the field], I would have said you’re crazy,” Hoge said. “He talked about knowing he needed to make changes. When I heard something else happened, I was like, ‘Oh, no, Le’Veon.’

“The window is so small. As players, the time is so short that we actually have a chance to do this. And you don’t get to go back in reverse to clean up things. That’s why I’m just praying that now that he’s had the double whammy, and this being his contract year, he just keeps doing what he has to do. You’re just hoping.”

On Sunday, the Steelers will lean on Bell again on the road as they go for their record ninth Super Bowl appearance. As always, the Patriots are no joke.

With Roethlisberger sidelined after knee surgery, New England defeated Pittsburgh, 27-16, in Week 7. Bell rushed for 81 yards on 21 carries and caught 10 passes for 68 yards. The Patriots, who ranked third against the run during the regular season, will be the best defense Bell has faced in a minute. Another big performance this week would only strengthen Bell’s position heading into contract talks with the Steelers in the offseason. But what about Bell’s past?

“He’s got to keep the off-field stuff right,” Clark said. “What he does off the field can’t keep him from being on the field. He has to be out there. He has to be accountable. But look at how he’s been since he’s been back. He’s showing something. You have to look at what he’s doing now – and what he does for your team.”

With Bell, there’s a lot to consider. Clearly, he makes the Pittsburgh Steelers better. The question, though, remains: Is Le’Veon Bell finally done hurting Le’Veon Bell?