If Rihanna caused a stir when she released the music video for “Pour it Up” in 2012, featuring herself and famed dancer Nicole “The Pole” Williams, then P-Valley, a new Starz drama from playwright Katori Hall, might just lead to an earthquake when it premieres Sunday night.

P-Valley is Hall’s first foray into television — she is both creator and showrunner. Hall is best known for The Mountaintop, Tina — The Tina Turner Musical and HooDoo Love. This show is adapted from her play Pussy Valley. It revolves around the happenings at Pynk, a strip club in the Mississippi Delta, where the dancers are all trying to vault themselves out of the fictional Southern town of Chucalissa, a dead-end locale that offers few lucrative employment prospects, especially for Black women lacking a college degree. (“Climbing up the pole just to get out the bottom,” a voice proclaims on the show’s trap music theme song.)

While Mercedes (a fiery, well-rounded Brandee Evans) is the queen bee of the Pynk, its proprietor and owner is the nonbinary Uncle Clifford (Nicco Annan), who proudly sets off her beard with an exquisite collection of lace front wigs and strip club madam costuming. As Uncle Clifford, Annan adds to a small but growing canon of fully-drawn, Black, Southern gothic queer characters who can line a lash as easily as they can kick an ass — building upon the groundwork of True Blood‘s Nelsan Ellis. (In 2012, Ellis directed a Chicago production of HooDoo Love.)

Both Uncle Clifford and Mercedes find themselves in a complicated land development triangle when a light-skinned new girl who calls herself Autumn Night (Elarica Johnson) stumbles into town looking for work.

P-Valley enters a debate over Black sexuality, propriety and sex work that’s been unfolding for years.

The list of male rappers who have made songs and music videos extolling their attraction to strippers is a long one. T-Pain’s “I’m N Luv (Wit a Stripper)” and “Booty Wurk (One Cheek At a Time),” Juicy J’s “Bandz A Make Her Dance,” 2 Chainz’s “I Luv Dem Strippers,” Bubba Sparxxx’s “Ms. New Booty,” Waka Flocka Flame’s “No Hands” and French Montana’s “Pop That” are just a few examples from a prolific subgenre.

Yet when female rappers such as Cardi B, Megan Thee Stallion, Saweetie, Bhad Bhabie, City Girls and Nicki Minaj claim the subgenre for themselves, backlash from their male cohorts in the music industry followed. Music producer Jermaine Dupri famously dismissed the work as “stripper rap” in a July 2019 interview with People Now.

In a follow-up interview with the Atlanta Black Star, Dupri dug in his heels: “So, people ask me, ‘Do I regret what I said?’ No. … When stuff like that’s happening and people in the streets are saying something like, ‘JD, I’m glad you stood up and said it,’ I feel like I did something.”

These arguments are almost always bound up in notions of respectability and concern for their effects on young girls, which is what happened when Paper magazine’s winter 2017 cover featured Minaj engaged in a “Minaj À Trois” with herself, drawing hand-wringing from rappers such as Eve.

Rather than hand down judgment from on high, or collapse strippers into irredeemably broken women, P-Valley provides a rare opportunity for the Black women who engage in such work to define themselves, while illustrating how their jobs fit into the larger fabric of their lives. Dancers at the Pynk, like nearly all strippers, are independent contractors, with no benefits, no collective bargaining and certainly no employer-subsidized health care.

The characters of P-Valley are savvy and aware of the ways they capitalize on their bodies, especially the acid-tongued Mercedes, who intends to retire from stripping at age 25 to open her own gym and dance studio. She’s basically the character Beyoncé sings about in “6 Inch” from Lemonade. Sings Queen Bey:

The song’s theme of striving in an economy that is inherently unfriendly to Black women comes booming through the song’s bridge:

Mercedes is pulling herself up by the straps of her 6-inch heels. She’s also an unconventional avatar for many Black women who start businesses to make it a rung or two higher on the class ladder, but find themselves locked out from financial resources that would help their businesses grow.

P-Valley never lets its viewers forget the labor or the artistry that goes into stripping, such as the core strength needed to hoick oneself to the top of a pole, to the gluteal, quadricep and hamstring strength it takes to balance and dance in platform heels.

Legacies of enslavement offer context for what’s happening in the Delta in big and small ways. The most overt example is Corbin Kyle (Dan Johnson), the entrepreneurial biracial son of a white plantation owner and his Black maid, who is ensnared in a fight with his white brothers over their father’s estate. It shows up in the dynamics of the Pynk as well. The brown-skinned Mercedes is clearly the most masterful dancer in the place, and she’s proud of it. She’s also well aware of the colorism at play when patrons choose the “high-yella” Autumn Night over herself, and she calls it out.

It’s a welcome exploration of the dynamic at play in Thick author Tressie McMillan Cottom’s essay “When Your (Brown) Body is a (White) Wonderland,” written in response to Miley Cyrus’s appropriation of Black dance during an MTV Video Music Awards performance. Writes McMillan Cottom:

When I moved to Atlanta I was made aware of a peculiar pastime of the city’s white frat boy elite. They apparently enjoy getting drunk and visiting one of the city’s many legendary Black strip clubs rather than the white strip clubs. The fun part of this ritual seems to be rooted in the peculiarity of Black female bodies, their athleticism and how hard they are willing to work for less money as opposed to the more normative white strippers who expect higher wages in exchange for just looking pretty naked. There are similar racialized patterns in porn actresses’ pay and, I suspect, all manner of sex workers. The Black strip clubs are a bargain good time because the value of Black sexuality is discounted relative to the acceptability of Black women as legitimate partners.

Black women’s bodies have long been capitalized for the profit of others. The American Slave Coast authors Ned and Constance Sublette coined the term “capitalized womb” to encapsulate how slaveholders used Black women to create wealth by giving birth to enslaved children, and their ability to be hired out as wet nurses.

Generations later, the Black women of P-Valley have learned to capitalize themselves for their own ends, rather than someone else’s. Mercedes works at her skills by going on daily runs with her pit bull, crafting new choreography and doing the squats and toe-touches that give her the strength and endurance to work the stage as well as she does. She chooses stagewear that tells a story and maximizes her earning potential. And Mercedes values herself as a musical kingmaker — she knows that if she chooses to dance to an unknown rapper’s song, she can kick-start his music career. And so the standards she sets for herself tower higher than the ceiling of the Pynk. Autumn Night, on the other hand, gets to breeze into amateur night and join the club’s roster — her proximity to whiteness is her meal ticket.

An overt example of the stripper-as-capitalized body can be found in Cardi B’s music video for “Money.” 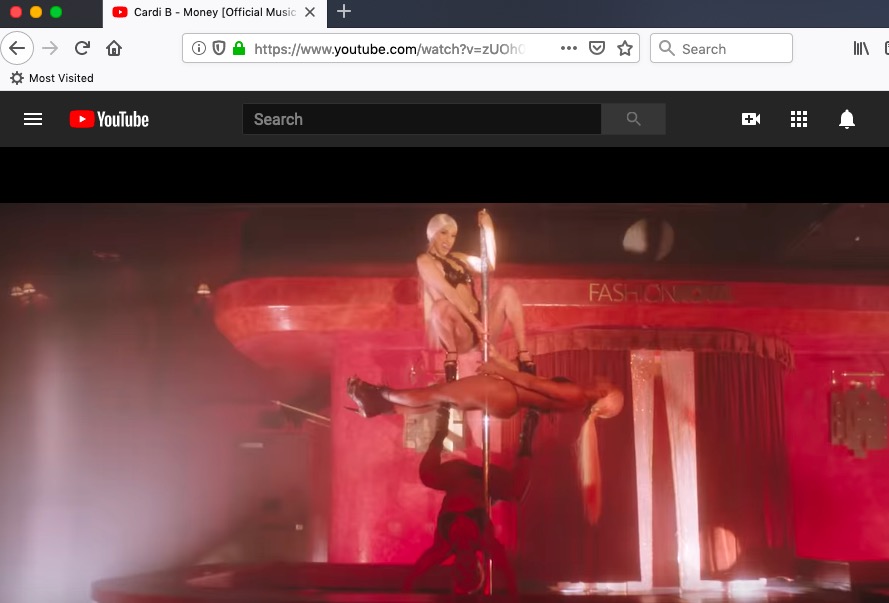 Cardi B, who successfully transitioned from stripping to rapping about it, refuses to cast aspersions on the work she did before gaining fame as a reality star-turned-emcee. She refuses to pick a side between madonna and whore. Instead, she twerks along the fault line, sometimes with her daughter Kulture in tow, leaving a trail of metaphorical dynamite in her wake. 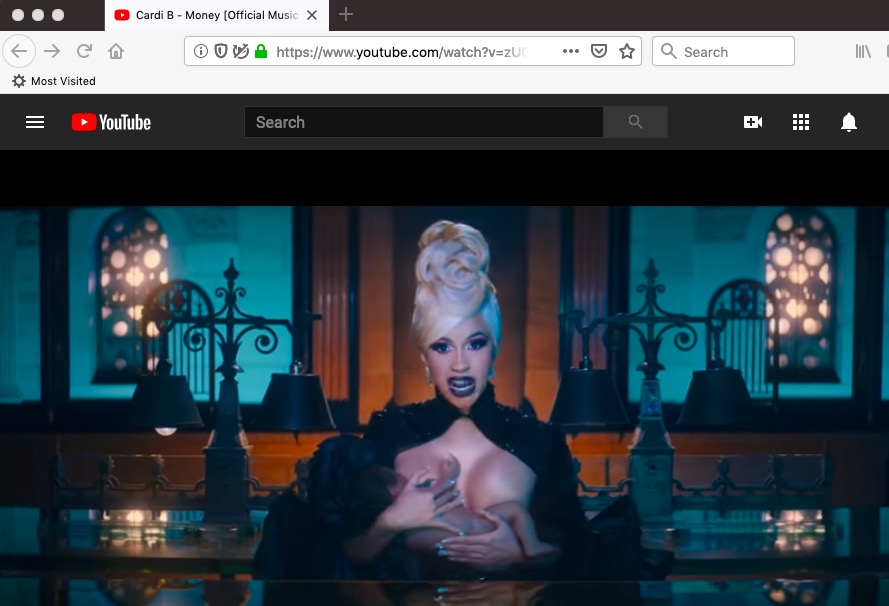 P-Valley’s stubborn refusal to be about just one thing sends its plot in multiple directions, and allows Hall to fold seemingly petty squabbles over power, influence and and locker size into a larger narrative of corruption, entrenched poverty, religion and trauma. Its intoxicating melange of characters blurs the lines between who is considered respectable and who is not — while making it clear that race and class often draw arbitrary lines of demarcation between the two. Such contrast makes for organic, deep-seated conflicts like the one between Mercedes and her Bible-thumping mother, or face-offs between the town’s mayor, Tydell Ruffin (played by Isaiah Washington, doing some of the best character work of his career), and Uncle Clifford.

Autumn Night ends up in the Valley because she’s homeless, broke and running from the traumas of a hurricane (the series does not specify if it’s Hurricane Katrina, though it’s an understandable assumption). Unable to save her own baby from drowning in floodwaters, Autumn Night salvages a single suitcase that contains a pair of Louboutins — or, as Cardi B calls the red bottoms in “Bodak Yellow,” “bloody shoes” — a black Yves Saint Laurent clutch and an empty wallet that contains a Texas driver’s license.

Hall, who hails from Memphis, Tennessee, is best known for her 2009 Oliver Award-winning play The Mountaintop, which takes place in Memphis’ Lorraine Hotel the night before Martin Luther King Jr. is assassinated. Her nuanced depiction of King helped open the door for other portrayals of the civil rights leader as a flawed husband, most notably in Selma.

Both P-Valley and the play that inspired it work with themes also explored in Dominique Morisseau’s Paradise Blue, which is set in a similar community in Detroit, and examines what happens to Black businesses struggling to counter the financial consequences of white land development.

Viewers can see how the aesthetics of Lemonade and Queen & Slim director Melina Matsoukas have swung open the doors for explorations of Black female sexuality that exist outside the male gaze that has dominated music videos, and thus, most pop culture depictions of Black strippers. P-Valley director Karena Evans and cinematographer Nancy Schreiber gamely stride through those doors, showering Jeffrey Pratt Gordon’s production design in a palette of blues, purples and pinks.

With its setting and female-centered focus, P-Valley is bound to draw comparisons to Lorene Scafaria’s 2019 feature Hustlers, which, with the help of Jennifer Lopez, reenergized Fiona Apple’s “Criminal.” But P-Valley is far grittier than Scafaria’s tale of scamming New York dancers scrambling for a foothold during the 2008 financial crisis. It is wholly an animal of the Dirty South, where thick thighs and thicker booties have long been celebrated. In 2003, the music video for Outkast’s “The Way You Move” featured female mechanics built like brick houses and turned model Ki Toy Johnson into the prototype for Black and white women alike, with Buffie the Body making her debut in Tony Yayo’s “So Seductive” two years later.

P-Valley has greater ambitions than simply ogling the legendary body type of these women, the popularity of which has fed an ever-growing industry of body modification. Instead, through Mercedes especially, Hall deconstructs the capitalization of Black women’s bodies, all the while refusing to lose sight of their souls.

The American Slave Coast: A History of the Slave-Breeding Industry by Ned and Constance Sublette

Thick: And other Essays by Tressie McMillan Cottom