Once he got to college, the wide receiver confronted his own problems with literacy

New England wide receiver Malcolm Mitchell caught six passes for 70 yards during the Patriots’ comeback 34-28 win over the Atlanta Falcons in Super Bowl LI. But his rise from fourth-round draft pick to NFL standout does not compare to his perseverance overcoming his own problems with literacy and helping others who have similar struggles.

That’s why Mitchell, 23, received the Promise Hero Award from America’s Promise Alliance during its 20th Anniversary Summit and Gala in New York in April.

When Mitchell went to college at the University of Georgia, he quickly realized he struggled with reading. He knew he needed to do something, so he started from scratch, reading children’s books and teaching himself to read better and faster. He soon developed a passion for learning and literacy that ultimately changed his life. Recognizing the transformative effects of books in his own life, Mitchell launched Read with Malcolm, a youth literacy initiative dedicated to promoting the benefits of books to students in underserved communities.

A recent report by America’s Promise Alliance found that children and young people facing multiple adversities (such as poverty, abuse or neglect) are more likely to struggle in school and in many cases, drop out. According to the Read With Malcolm website, children with the lowest reading scores account for 65 percent of all children who do not graduate from high school. The most successful way to improve the reading achievement of low-income children is to increase their access to printed reading material because 61 percent of low-income families have no age-appropriate books in their homes.

“The only boundaries are those we create for ourselves” is a phrase often used by the Valdosta, Georgia, native. Mitchell spent the majority of his childhood in a single-parent household, where his older brother steered him away from poor decisions and his younger sister made sure he remained level-headed.

The organization’s goals are to introduce book ownership to students in households where reading is not a priority and to improve literacy in schools with grade-level reading skills that are below average.

Mitchell graduated in December 2015 with a degree in communications, was drafted by the Patriots last May and has now written a book, The Magician’s Hat. ​He recently opened up to The Undefeated about overcoming issues with literacy and why he wants to see children thrive.

How did you overcame some of your struggles with reading?

I knew I couldn’t read well when I was in school, but it wasn’t really that big of a deal. I was still able to pass classes and do what I needed until I got into college. I think it really became more evident when I got to college and I’d sit in a classroom with my peers and I’d hear how well and how effectively they would read. I knew I couldn’t do it on the same level.

Then when it really became a problem is when I started watching movies and I couldn’t read the caption before it left the screen. Or I would actually pick up the wrong item at the grocery store because I wasn’t reading the labels correctly. That’s when I decided I would need to do something to make that change. That’s not a good feeling.

I decided I would start reading more. I went online. Started looking up books. I heard a couple people that were successful mention books. I went into Barnes and Noble, picked up the books that they mentioned, turned to the first page, and I couldn’t read the words off the first page of those books that I was picking up.

I got discouraged, figured I’d just continue like the way I had been. But something that I talk about now is always striving to be the best you possibly can, not only in one area of life but every area possible. I started all the way over.

From that, it wasn’t always easy. But I figured if I practiced reading the same way I practice football, eventually I’ll be better in some ways. Maybe not perfect, but if I do something long enough I have to be better at it. That was the approach I took when I went to that Barnes and Noble and started from books like The Giving Tree.

What are you reading now?

Right now I’m reading, actually, a book on Colin Powell and The 33 Strategies of War. I can read more than one at a time now.

How did you come to start your youth literacy initiative?

When I was in college, we were always encouraged to do community outreach. I always gravitated toward kids. When I started my reading journey, I found out how reshaping my thought process and the way that I approach life, I wanted to share that. I started going to schools, elementary schools primarily, and I’d read children’s books to kids. From that, on my own I’d be able to create something that would be my own personal message that reading can change the world and change people’s lives. That’s how Reading with Malcolm was created. I would do it relentlessly throughout my time at UGA. 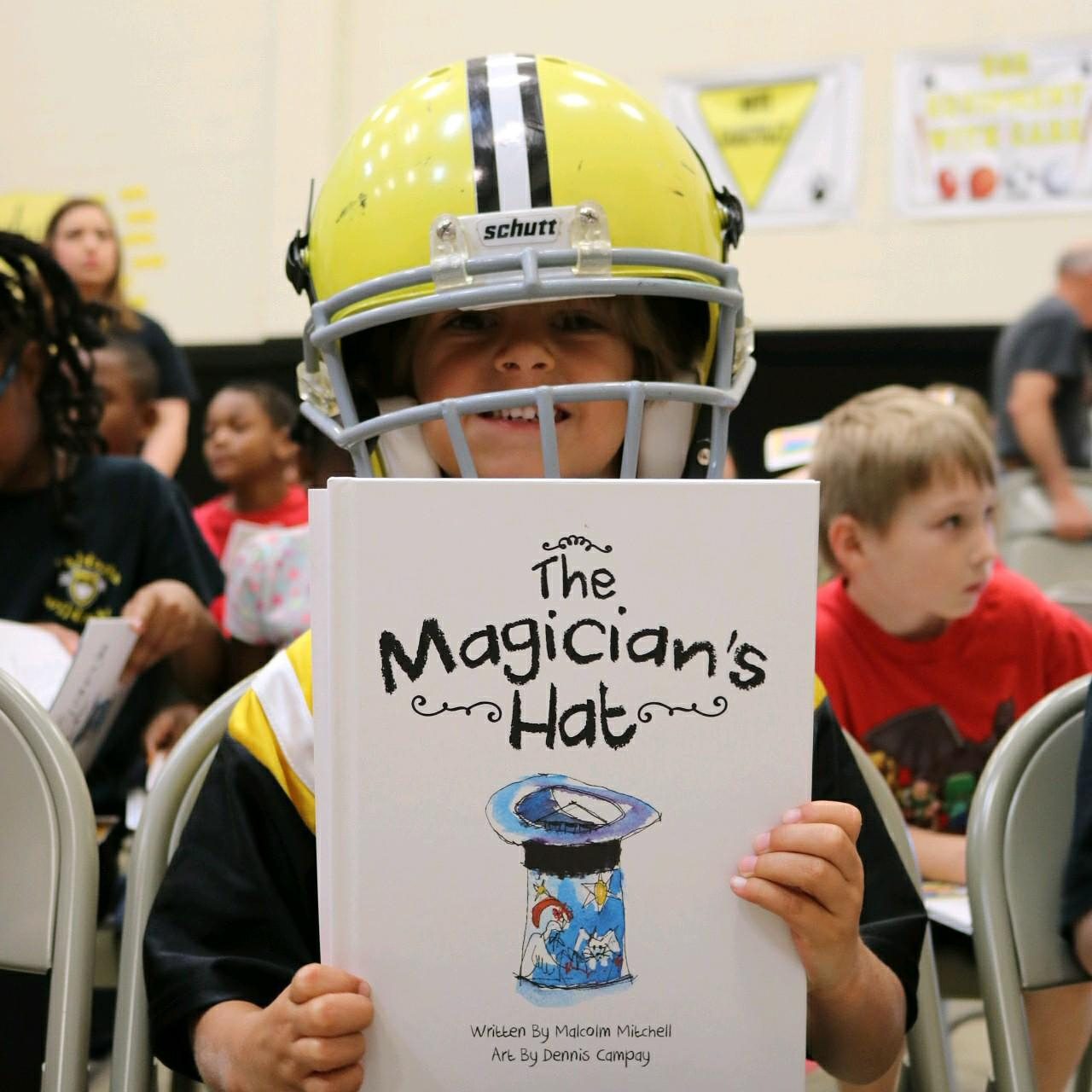 What’s been the hardest part of the entire journey?

Probably getting the book printed. Yeah, it’s a lot more to it than just putting words on a page. I found that out.

What’s the best piece of advice you’ve ever received?

Who or what inspired you most to take this step in your journey?

I would say my mom because as far back as I can remember she always encouraged me to do what was best. Don’t follow anybody. Lead. Especially if it doesn’t make sense. I always strive to be the best you possibly can, even if that means stepping outside of your comfort zone. Doing what’s necessary for you, what might not be perceived as being cool or something that most people would do. I think just that upbringing allowed me to be OK going in directions that some people might not think would be either cool or perceived as being something they should do.

What are your goals moving forward with your organization?

My goal is to inspire every kid to pick up a book to read. To give themselves the opportunity to grow beyond anything they could’ve imagined for themselves. To empower them and show them that through reading you can truly accomplish anything that you set out for yourself.

The big problem that we see at Read with Malcolm is that kids, most kids, don’t have age-appropriate books in their homes, approximately, over 60 percent [of them]. Because of that, they never … it’s not their fault. They were just never granted the opportunity to know what the opportunities that reading would give them. But if we can continue to strive and push our message and go to places that everyone might not go or put books into the hands of kids, then we grant them the opportunity to make a change, to pull themselves out of any adverse situation that they’re in.

Are there any misconceptions about overcoming issues with literacy?

That’s a good question. We have read research that shows even conversation to a child at an early age will promote the better ability to read because their vocabulary will be increased. So, truthfully, baby talk isn’t a good thing.

What is your favorite children’s book?

The Giving Tree and Exclamation Mark. Those were the ones that impacted me and encouraged me to continue. Even those two encouraged me to write children’s books of my own because I wanted to be inspirational just like they are.

Do you have any favorite authors ?

My favorite author is actually … everybody loves J.K. Rowling, for the Harry Potter series. But I also love Robert Green. He writes books like The 33 Strategies of War. He brings in a big historic component to show how you can use influence to help position yourself to get where you want to be. Those two would be my favorite. Obviously, Harry Potter is iconic.

Where do you see your literacy advocacy going?

I hope to be somebody who can continue to write and motivate kids to pursue whatever goal they set for themselves. Somebody that writes to encourage kids to overcome adversity. I want to be more than a football player — even though one that keeps winning the Super Bowl, I hope, because it definitely does, it definitely gives you the platform bigger than if we didn’t.

I hope to still be playing football. Still to be encouraging kids to read. I still want to be writing and pushing the message that reading can truly change the world, any way I possibly can.

How do you feel about receiving the award from America’s Promise Alliance?

That just motivates me to continue going. To stay an extra hour, to visit an extra school. To Skype with one extra class. It’s just proof that the message is being heard not only locally, where I’m from, but nationwide. That’s the goal, to impact the lives of everyone through reading.

I think it’s really satisfying. We’re doing the best we can, and it’s being recognized. It’s something that I definitely appreciate it because … winning an award like this outside of football wasn’t something that I knew would be possible for me.

What would you change in your journey if anything?

Nothing. … Even though at the time it might have not been the best thing that I thought was happening to me, but honestly it put me in a position where I could do what I really love.

What kind of advice would you give to a kid who has some of the same struggles that you’ve had?

I would look him in the eye and tell him to never give up, to look at every day as an opportunity to be the best person he could possibly be and strive to do that. I would tell him in every adverse situation there’s an opportunity to do something great, because the truth is we all face adversity. Those who overcome it with relentless effort are those who give themselves the opportunity to do something, see something that others might have not had. I would encourage him to strive and wake up every day, try to be better than he was the day before, and to make sure when he looks into the mirror when he reaches, I don’t know, 50, that he can look back and say he gave it everything he had regardless of the outcome.