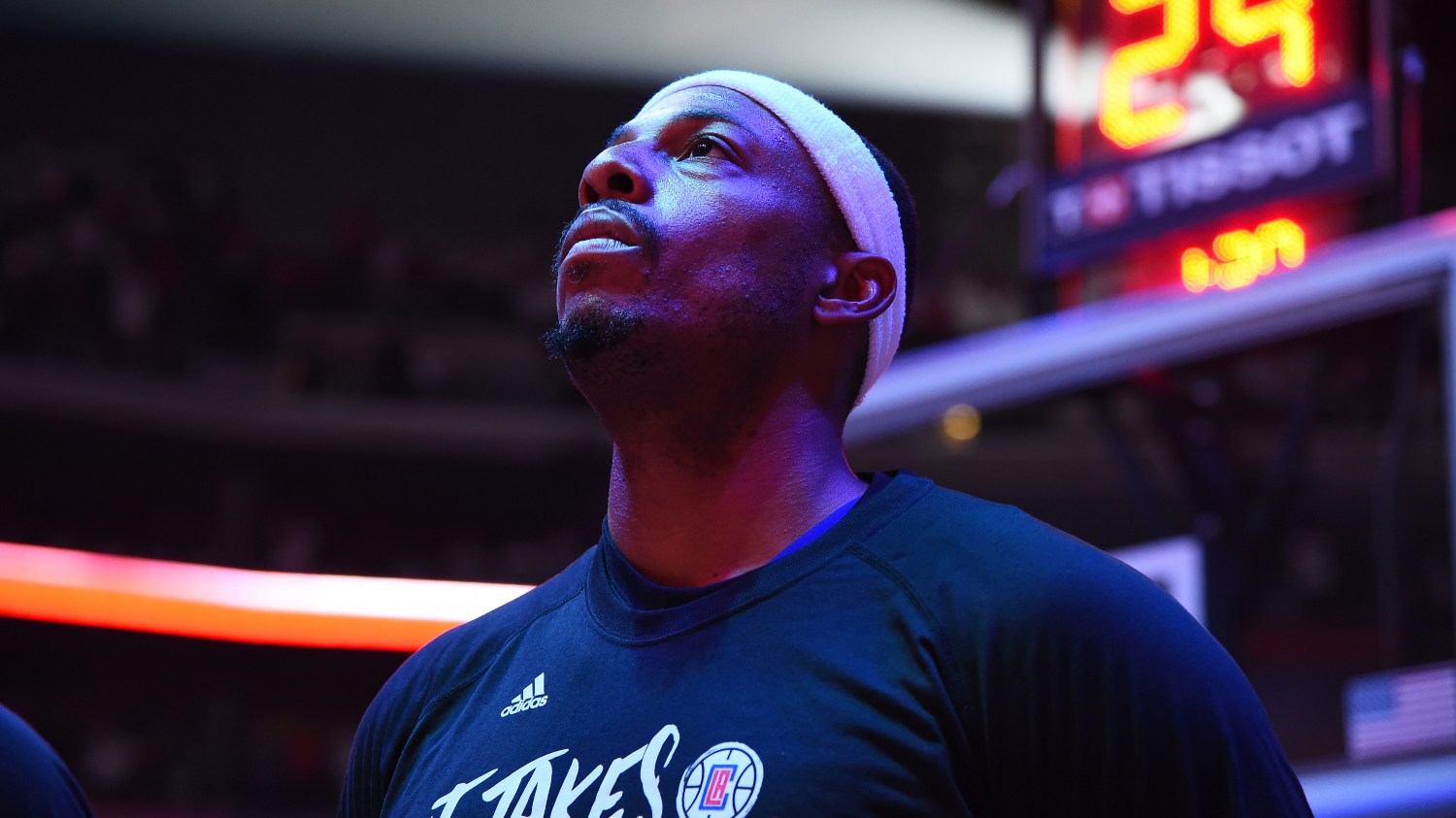 Paul Pierce #34 of the LA Clippers stands for the National Anthem before Game Seven of the Western Conference Quarterfinals of the 2017 NBA Playoffs on April 30, 2017 at STAPLES Center in Los Angeles, California. Andrew D. Bernstein/NBAE via Getty Images
NBA

As a smiling Paul Pierce walked off the NBA hardwood for the last time, he said farewell to the fans by making peace signs with his raised hands while they chanted, “The Truth” and “We Love You, Paul.”

The future Hall of Famer completed his NBA career by scoring six points in 22 minutes for the Los Angeles Clippers during a season-ending 104-91 loss to the Utah Jazz in Game 7 of their first-round playoff series Sunday.

Pierce was the 2008 NBA Finals MVP after joining Kevin Garnett and Ray Allen in leading the storied Boston Celtics to their first title in 22 years. The 10-time All-Star is 15th all-time on the NBA career scoring list with 26,397 points.

Not bad for the 10th pick in the 1998 NBA draft who wasn’t the best at anything but did everything very well.

“It was going to be the last time that I hear the roar of the crowd,” Pierce told The Undefeated. “Well, maybe not the last time. There will be the 10-year anniversary [NBA championship] team [reunion]. As a player, it was awesome just being able to appreciate the crowd night in and night out.

“The cheers. The boos. The player camaraderie. That’s the stuff I’m going to miss most.”

Before Pierce’s swan song with the Clippers, his career included stops with the Brooklyn Nets and the Washington Wizards. But in five years, when he enters the Naismith Memorial Basketball Hall of Fame, there is no question the star small forward nicknamed “The Captain” and “The Truth” in Boston will go in as a member of his beloved Celtics.

Only John Havlicek scored more points for the Celtics than the 24,021 points that Pierce scored from 1998 to 2013. Pierce’s All-Star appearances were in a Boston uniform. Even after fellow All-Stars Garnett and Allen joined forces with him in 2007, Pierce was still the face of the Celtics as they won the franchise’s first championship since 1986. The Celtics have 21 retired jerseys. Expect the 22nd to be Pierce’s No. 34. The New England Patriots fan is proud of the impact he made doing charity work in Boston.

“In 15 years in Boston I was able to leave a lot of great memories on the court,” Pierce said. “I think a lot of people will remember Paul Pierce as embodying what Celtic pride was all about. I wore the jersey each and every day with pride and respect for the organization. I not only gave them everything on the court, but I think they will also remember what I was able to do through my foundation. I was able to inspire a lot of kids in the community who didn’t have a lot of the same opportunities as some other kids.

“When you walk into [TD Garden] that first day and you see all those banners and you see all those [retired] legends’ [jerseys], it is a constant reminder each and every day that is what you play for. And to finally win that was like gratification and a weight off your shoulders. I was a franchise player who played for ‘the franchise’ for so many years.”

Pierce was also one of the most competitive, confident, cool and cocky characters to ever play in the NBA.

He had no problems talking trash regularly to superstar Kobe Bryant. The 6-foot-7, 235-pounder thought he was casket sharp when he confidently wore a loud, Steve Harvey-like suit to a Celtics home game that had a large “P2” patch stitched on it for “P-Squared.” In his prime, there was a stretch where Pierce was the only NBA player who would regularly go toe to toe triumphantly against LeBron James. Hoping to help a Celtics video attendant impress a girl he was fond of, Pierce told him he could stretch him out on the floor before a game in Boston to wow her. That’s the truth about “The Truth.”

And who could forget an injured Pierce leaving Game 1 of the 2008 NBA Finals in a wheelchair and then eventually returning to play?

Pierce was a Dennis Eckersley-type closer in his prime who made the big shot or a series of shots to shut down a game in pressure situations.

“Paul Pierce just means the world to me,” said Clippers coach Doc Rivers, who also coached Pierce in Boston. “I love him. He allowed me to coach him without question. We won a world championship together. He means the world to me. He is one of the great ones. He is one of the great winners. One of the more clutch players. Paul is about as clutch as any player that I’ve ever been around.”

Said Garnett to The Players’ Tribune: “I thought I was over the top until I saw him. And then I was like, ‘OK, this is what a beast is.’ ”

Pierce grew up about 10 miles away from Staples Center in Inglewood, California, where Magic Johnson and the Los Angeles Lakers used to dazzle and win titles in The Forum. The 1995 McDonald’s All American and Mr. California basketball starred at Inglewood High School before going on to Kansas, where his jersey was retired. While it certainly would have been sweeter for Pierce to end his career in Boston, he came back home to retire while playing for his beloved Rivers.

Pierce announced this would be his last season on Sept. 26. Even on the morning of his last game, he kept the same routine with his pregame workout and food. His wife, Julie; two daughters, Prianna and Adrian; and son, Prince, were there, as well as several family members and friends. Pierce’s elderly mother, Lorraine Hosey, watched her son’s final game from home in Los Angeles.

“I didn’t have a lot of people here, mostly just my wife and kids,” Pierce said. “My mom is 74 years old, and she sits on her couch and watches. I had some close friends, relatives and cousins. We’ll probably go do something tonight.”

After the buzzer sounded on the Clippers’ season and Pierce’s career, he hung around on the court for a while as several members of the Jazz offered respect, embraced him and said goodbye. The last person Pierce hugged before he left the court was, poetically, Rivers. Once in the locker room, Pierce said a warm goodbye to coaches, teammates, ball boys and even several media members. While Pierce held news conferences on numerous podiums in private rooms after playoff games, his last media scrum was in front of a table with chicken parmesan, grilled chicken and salmon and sautéed vegetables behind him.

Pierce was at peace with retiring.

“I allowed myself to be,” Pierce told The Undefeated. “You know it’s going to end one day. I just felt like this is the right time. My body and mind, having that still intact. My kids and family. In some capacity, I will be a part of the game. Maybe front office. TV. I still love this game, talking about it and being around it.”

Clippers athletic trainer Jasen Powell made sure to take one last look at Pierce’s body before letting him leave the arena. Pierce plans to spend more time with his family and his AAU boys’ basketball program. He has expressed interest in joining an NBA front office one day and has experience giving NBA analysis on ESPN. But there are no immediate retirement plans.

Wearing sunglasses, a pink dress shirt, a black pinstriped suit and white Air Force 1 Nikes, he departed by himself with a bag of basketball gear hanging over his shoulder.

“Signing off. Bags packed,” Pierce said as he walked to his car.