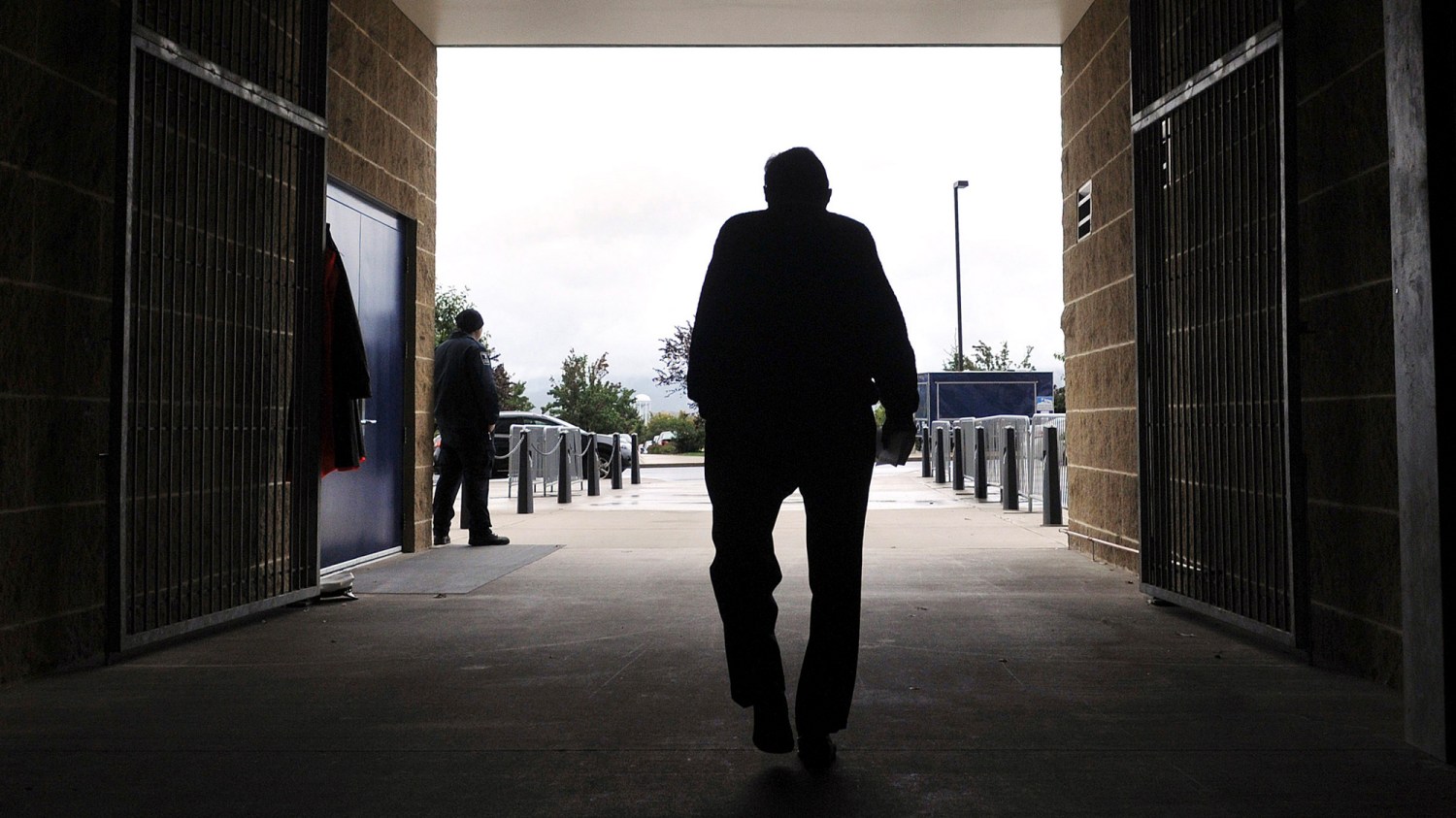 In this Oct. 5, 2010, file photo, Penn State football coach Joe Paterno leaves Beaver Stadium after his weekly college football news conference in State College, Pa. Penn State football coach Paterno, told by a teenage boy in 1976 that assistant coach Jerry Sandusky molested him in a shower, responded that he didn’t want to hear about it and had “a football season to worry about,” according to court documents unsealed Tuesday, July 12, 2016. He said Paterno “just walked away.” AP Photo/Pat Little
Commentary

Penn State doesn’t get to decide JoePa’s legacy: I know

It took me years to forgive my own family, but I’m telling my story now

Four Octobers ago, I stood in a single-file line outside a small county courthouse in Bellefonte, Pennsylvania. It was a crisp, sun-dappled fall day. I’ve never experienced such rage.

We were waiting to get into the courtroom where Jerry Sandusky, a former assistant football coach at Penn State, would be sentenced to 30-60 years in prison for the sexual abuse of 10 boys. The college president would resign. The athletic director would resign. And the head coach was fired in disgrace. They all knew.

I was traveling with a man I’ve known a long time and he quietly reviewed the story of what happened to him, some 40 years ago when he was 12. He thought about his family betraying him the way the Penn State “family” betrayed those boys.

This weekend, former players and tens of thousands of fans paid homage to the late Joe Paterno on the 50th anniversary of his first game as head coach. Paterno happened to win 409 games over 46 years and gave his college town a national identity as a football powerhouse before we found out his real legacy: enabler of a convicted pedophile who raped boys over at least four decades.

Sandusky used his Second Mile Charity for at-risk and underprivileged youth to groom his victims. He did not discriminate. Black, brown and white kids were molested, their economic status creating another layer of vulnerability. Many of these boys were orphaned. They didn’t merely come from broken families; they had no family. Second Mile and “Touchdown Jer” became their family.

They say, “We are Penn State.”

They call themselves a family …

Well, I happen to know something about families like this.

When the man I knew was a kid growing up in California, he had an uncle who was a magician. The uncle used the stage name “The Magic Trebor” (Robert spelled backwards), while his family called him Spud. He taught the boy his quarter trick, a sleight-of-hand staple in his act that always looked as if the coin had dropped into his right hand but somehow always ended up in the left hand – before he pulled it out of an awed child’s ear.

After a while, Spud let himself go. He often smelled of the Winston cigarettes he smoked. He lived in some hovel near Oakland. No one knew what he did for a living.

One 100-degree summer night 40 years ago outside the town of Red Bluff, California, the family held a somber reunion for the boy’s grandma, who was dying of lung cancer. His uncle asked him to go outside with him while he smoked.

The uncle began telling him jokes – bawdy, sexually suggestive jokes that piqued the 12-year-old’s interest. After 45 minutes or so, his uncle told him that if he ran naked from the steps of his grandpa’s shed, where he was sitting, to the front fence and back – maybe 20 yards – and wasn’t seen by the family in the mobile home another 20 yards away, he would give him a $1 bill. One dollar in 1976 was 50 pieces of red licorice, he reasoned. He thought nothing of dropping his shorts and sprinting to the fence and back and then pulling up his shorts again.

His uncle giggled and gave him the money.

When it was time for bed, the uncle asked to sleep in the back room with his nephew, a screened-off porch area adjacent to the main home. His grandfather, parents, aunts and uncles obliged.

Over several hours, the boy was pushed to “explore his sexuality” with an adult male relative, who at the time was 36 years old. He felt guilt and shame, but his uncle kept pressing the matter, eventually molesting and sodomizing him. The boy was confused. He had not yet experienced physical intimacy like that with anyone.

The overriding emotion was feeling stupid that he let himself be led on. The smell and taste of those Winston cigarettes remained with him always. As recently as 15 years ago, he would throw up when he saw someone smoking them.

He blamed himself for years, living with a shame and guilt that he could not shake, wondering why he didn’t scream or say something to someone.

He eventually confronted the uncle, writing him a letter some 20 years after he was raped. In it, he wrote, “While you are family, some people do things in families to not be part of that family anymore. And for me, you have crossed this line.”

He never got a reply – most victims of child sexual abuse never get acknowledgement from their molesters. He saw his uncle maybe three times in his life afterward, at family gatherings where his uncle steadfastly avoided him and at his father’s funeral, which the uncle begged to attend through the boy’s aunt.

When he eventually got the courage to tell his family what had happened, he learned that most of the family knew long ago that Spud had problems in the past. They just thought he would never do something like that to his own flesh and blood.

He received a letter from an aunt a couple of years later, pleading with him not to make his uncle feel so bad for what he’d done so long ago. Soon after she sent a picture in the mail of his father, his other two uncles and Spud, their arms around each other at a family function he did not attend.

“Look, they’re all together,” the caption read.

A different pain gnawed at him when his sister called 15 years ago to tell him that she had put Spud’s name into a public database of registered sex offenders. When his uncle’s mugshot popped up, along with the sentence, “convicted of lascivious acts with children,” he froze.

And then he became enraged. He wanted to kill somebody. He medicated with women and food over the years, trying to fill the empty parts of himself, the hole in his soul.

He couldn’t believe it – the courage they showed to look their abuser in the eye, to do the job Paterno and the athletic administration at Penn State failed to do years ago: ensure that other boys don’t lose their souls to a sick man.

“As I put the 1998 shower incident into focus . . . that night you told me you were the Tickle Monster so you could touch my 11-year-old body,” began Victim 8, choking back tears. “I’ve been left with deep, painful wounds that you caused and had been buried in the garden of my heart for many years.”

The man especially related to Victim No. 4, who eyeballed Sandusky with venom. “Because of you, I trust no one. I won’t leave my child alone with anyone. My only regret, I ask that others [who came forward] before me forgive me for not coming forward sooner.”

The man knew Victim No. 4 had wanted to put his hands around Sandusky’s neck, too, and not let go until the smirk was choked from him. But he hadn’t. Not then and not over the ensuing years after the rape. No, Victim No. 4 wouldn’t throw two lives away. He had not given in to his rage. And in so many ways, this was even more courageous, the man thought. For it gave him hope.

“Uncle Spud” died earlier this year. His siblings visited him at the end. They tried to persuade him to call his nephew and ask for forgiveness. He couldn’t bring himself to do it. By then, the man didn’t care. All he wanted to tell Spud was that he had not destroyed the boy, that he hadn’t ruined his life or his aspirations about finding happiness. It took him longer, but he found healthier ways to fill the void, the hollowness in your soul when an adult has duped you into being his victim under the guise of physical pleasure.

The Veterans Affairs Hospital where he died feted him with a procession outside the facility, folding and handing over an American flag to one of Spud’s brothers, who had been moved by the ceremony. Those paying respects that day learned he had briefly been in the U.S. Army, serving in Germany during peacetime. They never learned he sexually abused young boys.

After a while, the man realized there was a part of Spud his siblings loved – the part that protected his sister when children tried to bully her as a child, the part that made children smile and laugh, the ones he never harmed. This was their cognitive dissonance. It helped them cope with the fact that their brother had stolen other young boys’ souls.

It’s the same kind of cognitive dissonance the Penn State alumni and fans, all in deep, sad denial, need to coax from themselves to cheer for all the good Joe Pa did for everyone.

Joe Pa knew. He knew and he did nothing. He knew in 2001 and 1998 and, because of unsealed court documents, we learned this summer that he also knew as far back as 1976.

Leaders of men do not deserve to be commemorated if they cannot protect children. Taking the good parts of a man’s life and celebrating them – paying homage for all the character-building he did for his players – disrespects and demeans the boys who became men after they were abused by Sandusky, especially the ones whom Paterno knew about.

The people who stood to honor Paterno may have meant no harm. But to Sandusky’s victims, to all victims of child sexual abuse, pining for Penn State’s past is the opposite of love.

I was that man in the small county courthouse. I was that prepubescent boy. I was he and he was I, and we have been living with the sadness and the trauma of that night for 40 years.

I am a survivor of child sexual abuse. I write this for myself, because I am the one who should decide when and if to forgive my uncle, and I also write this for the adult survivors, the men who were victimized by Sandusky.

I know now it wasn’t my fault. I’ve purged my shame and guilt. I believe in family, now more than ever, as I’ve got a family of my own. I’ve even forgiven my relatives, the ones who knew. But I’m not ready to honor them on a college football Saturday.

It’s not up to the Penn State community – the unaffected fan in the stadium’s third row – to decide how Paterno’s legacy should be treated. It’s not up to his widow, Sue Paterno, who persuaded the university to have this weekend.

It’s up to the men who were molested. They get to decide.

For more information, go to malesurvivor.org or call the National Child Sexual Abuse Helpline (Darkness to Light) at 1-866-367-5444. If you suspect a child is being harmed, go to RAINN.org.