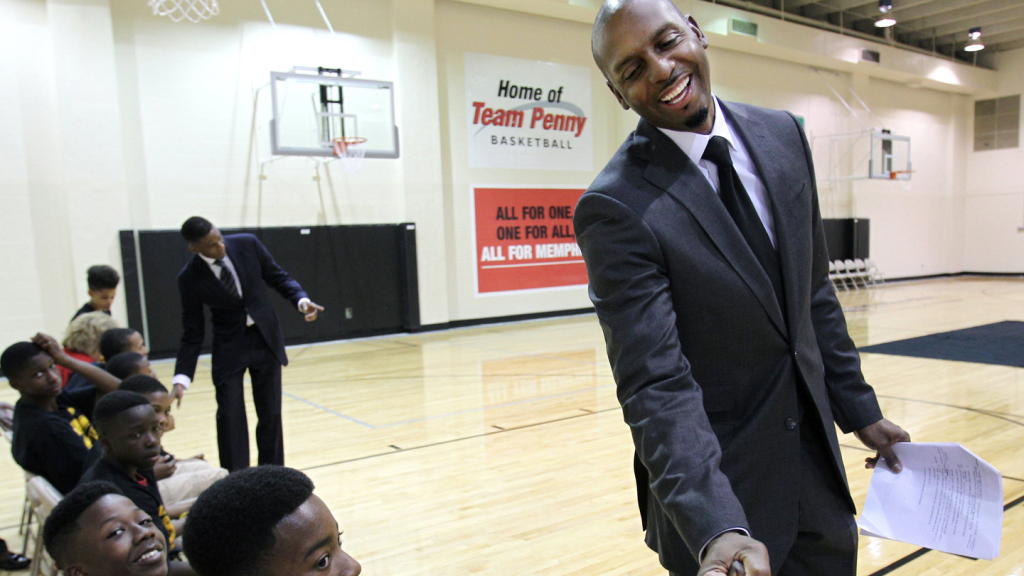 April 24, 2012 – Memphis, Tennessee, U.S. – ANFERNEE ‘PENNY’ HARDAWAY shakes hands with players from the Lester Middle School basketball team before the start of a press conference to announce that Methodist University Hospital will be providing Hardaway’s youth program, Penny’s FastBreak Courts, the use of their basketball facility.
The Next Chapter

NBA great Penny Hardaway helped guide his team, the East High Mustangs, to their second consecutive AAA state title. The Mustangs finished an amazing season (35-3) by beating their Memphis rivals, the Southwind Jaguars, 65-45 in the championship game on March 18 in Murfreesboro, Tennessee. The Mustangs have won eight boys basketball titles, more than any in Tennessee.

“Winning back-to-back state championships — to be able to accomplish it was amazing,” Hardaway told The Undefeated. “All the hard work, practices, the time put in, sacrifices, everything that went into trying to build this team to a national prominence has all come to life, really. We are No. 2 in the country behind Nathan Hale High School [coached by former NBA player Brandon Roy] and we’re back-to-back state champions, so I couldn’t have asked for anything more.”

Many know Hardaway as a fast-passing, ball-slamming combo guard who led the Orlando Magic to the NBA Finals alongside Shaquille O’Neal. He had big goals. But his professional career ended before he could reach his biggest goal. The Houston Rockets swept the Magic in the 1995 NBA Finals and Hardaway never reached another finals series in his career.

Now Hardaway has reached a goal that may seem like it’s smaller than a NBA championship, but it reaches far beyond the court.

“We did it for Dez,” said the NBA great after East High School won the 2016 AAA boys’ basketball tournament in a 64-60 victory on March 19, 2016 when they won their first tournament.

The retired baller and local community philanthropist could be doing a million other things in the post-playing career phase of his life, but he spends his time coaching the Mustangs in his hometown of Memphis, Tennessee.

Hardaway’s journey began with a promise he made to longtime friend Desmond Merriweather, known to many as “Dez.”

Merriweather was a highly successful coach at Lester Middle School in Memphis when he reached out to Hardaway to help coach the team. The two led the Lester basketball program to three state championships.

When some of the students at Lester later went on to East for high school, Merriweather followed. All the while, he was battling colon cancer. He served as the Mustangs’ head coach only a few months before he died on Feb. 8, 2015, at the age of 41.

Hardaway later stepped in as head coach. East only lost two games during his first year.

“Dez set this vision in motion over four years ago,” Hardaway said. “This championship was for him. God is so good. Dez’s spirit was in the building.”

Merriweather also asked something else of those close to him, said Bridget M. Evans, co-founder of the Desmond Merriweather Foundation.

“One week before Desmond died, I was visiting with him,” Evans said. “He looked at me and said, ‘Make sure my boys go to college.’ ”

On Saturday, Hardaway and the team “did it for Dez” again. Three student-athletes crossed the stage, fulfilling their mentor’s second promise.

Kobe Freeman, Robert Washington and Courtney Carter received their diplomas and are headed to college.

When Freeman’s name was called, he walked across the stage and lifted one finger in the air. He has narrowed his choices down to Lane College and Texas College, and also received a scholarship from the Desmond Merriweather Foundation. A quote from the award reads:

“With God first, there are No Excuses.” — Coach Desmond “Dez” Merriweather

Merriweather and Hardaway had a lasting impact on the young men they came in contact with over the years.

“Dez and Penny taught me that, no matter where you’re from, there is always a way out. No matter what your condition is, continue to move forward,” Freeman said with an obvious sense of pride. “Do unto others as you would have them do unto you and to never forget where you come from.”

Washington, who will be attending Texas College, said he has also learned a great deal from his coaches.

“Dez and Penny taught me how you should never quit on someone you love.” He said he will give back to his community by providing time to the younger kids.

Carter has narrowed his choices down to Henderson State University and Missouri Southern University. He said he will never forget the lessons he learned from Merriweather and Hardaway.

“Dez taught me that no matter what the odds are against me to never stop fighting and to never give up, no matter what,” he said. “Penny taught me to always work the hardest, never let anyone outwork you and to strive for perfection.”

For Hardaway, it’s about far more than winning the state championship — it’s about fulfilling the promise to motivate, educate and graduate.

“Desmond knew how important that next level was. He understood the importance of knowledge and the power it possessed. He knew that, in order for these kids to make it, they were going to need something that no one would ever be able to strip from them — the power of their educated minds,” Evans said. “His request will forever stay with me and I’m going to fight with every God-given gift and resource I have to make that a reality.”

Merriweather’s son, Nikcolauz “Nick” Merriweather, a junior at East High and member of AAU Team Penny, echoed the words of his teammates and honored his father’s legacy.

“Through my dad and Penny, I’ve learned to stay humble, keep God and family first and continue to work hard in everyday life,” he said. “If I could talk to him right now, I would want to tell him about our run to the state championship and that I did it all for him.”

Merriweather lived his life and gave to others, especially the kids he mentored. Hardaway joined him in the cause and both left lasting impressions on those young men’s lives.

Despite the challenges in Memphis, Merriweather and Hardaway set their sights on mentoring young men and preparing them for life beyond basketball.

*This story has been updated to reflect the recent news of the East High Mustangs 2017 season.

Sharon Brown is a basketball writer and founding editor of All Heart in Hoop City's blog.

This Story Tagged: NBA Get Lifted Daily Uplift Penny Hardaway Most Undefeated 2016 The Next Chapter