Prairie View A&M students ask: If our vote doesn’t matter, why do they try to keep us from voting?

For nearly a half-century, Prairie View A&M University students have fought for their right to vote. Today, five alumni and students continue the work of those who came before them.

In 2018, students Jayla Allen, Treasure Smith, Damon Johnson, Joshua Muhammad and Raul Sanchez became plaintiffs in the NAACP Legal Defense and Education Fund (LDF) voter suppression lawsuit against Waller County, Texas. Allen, Smith and Johnson testified at the two-week trial held in federal court in Houston in September. They are fighting for the right to vote early on campus after on-campus voting hours were cut drastically by the county elections board. There is no decision yet in the case. 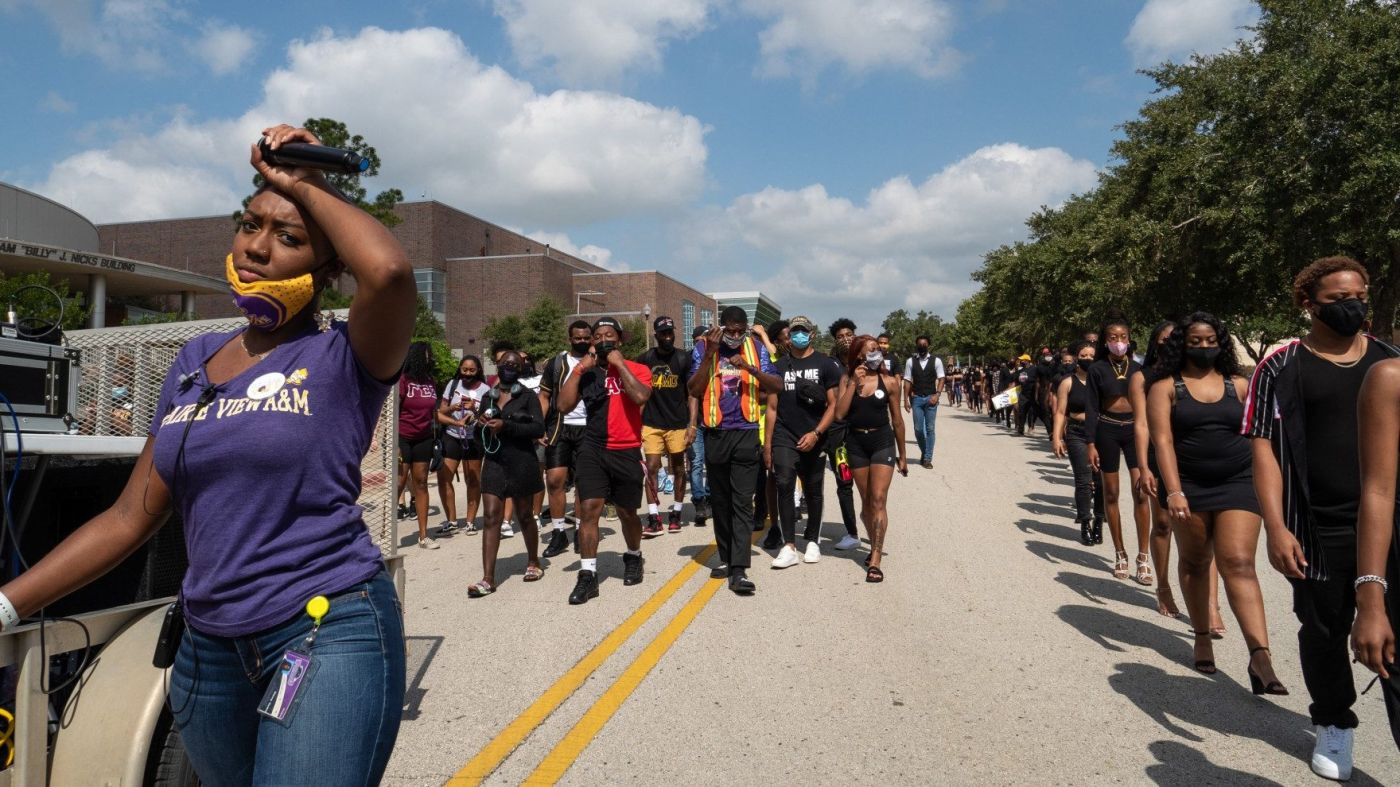 On Oct. 13, Allen voted early in her hometown of Mesquite, Texas, and Smith on the 19th voted in Waller. Johnson will be voting soon in his hometown of Houston.

Allen was a Waller County Democratic Party precinct chair whose responsibilities included planning, scheduling programming and event coverage for voting. She said Prairie View A&M students are being left out of decisions by Waller County commissioners and the board of elections that could affect them. Even in her party position, she was uninformed on topics regarding students until final decisions were made.

“We have 8,000 students on campus that call Prairie View home, yet when decisions like when they’re going to be able to vote and their access to the polls come about, they’re left out of the equation,” said Allen. “But it’s also not just about having more polling locations. It’s about how people of certain backgrounds, of certain colors and of certain communities don’t have an advantage when it comes to casting their ballot.”

Students ask if their vote doesn’t matter, why does Waller County try to take it away from them.

How it all started

Prairie View, Texas, is home to Prairie View A&M University, the state’s oldest historically black institution. With more than 8,000 students calling the small city home, it stands as the lone predominantly black city in the small yet predominantly white county of Waller.

“When I was given the early voting schedule, which was two weeks originally, I saw that our polling place for our campus had no days scheduled for the first week,” said Allen, 21, who graduated in 2019. “That first week we had no days or hours whatsoever for voting on campus. Students, colleagues and friends eventually became aware of this and we began trying to find ways to change this ahead of the election.”

The schedule changes, students’ busy schedules and lack of transportation made adjusting to the three-day window difficult for many.

Their first attempt at regaining their original early voting schedule landed the students in Waller Commissioners Court, where they filed a motion requesting additional voting days. The motion was denied due to the hearing being so close to the start of the voting period, and for what Waller court officials called a lack of resources.

The NAACP Legal Defense and Education Fund (LDF) announced it would sue Waller County in 2018 for allegedly violating the Voting Rights Act and the Constitution by not offering an adequate polling location on campus or in the city of Prairie View during the opening week of early voting.

The Waller County elections board contends that limiting early-voting hours does not violate students’ rights because students can vote elsewhere in Prairie View, that resources are limited and that the situation does not unduly harm the students.

Why did students get involved?

Senior Smith, 22, is a member of IGNITE, the debate team and the Blackstone Pre-Law Society. She said her busy schedule and inaccessibility to transportation made voting more difficult than usual.

“Students have to vote off campus, but it was a hardship for some students to get off campus,” she said. “Personally, I didn’t have a car during my freshman, sophomore or junior year. I totally relied on everything on campus. When [the schedule] was reduced, it was kind of a slap in the face because then it was like let me alter my schedule to make this a priority, because I don’t have a car and I know I can’t necessarily rely on someone to give me a ride to the nearest polling location. Knowing that if I don’t get my vote within these three days, I won’t be able to exercise my constitutional right to vote, was a hardship.”

Smith said regardless of the lawsuit’s outcome, she was glad to take part in it.

Senior architect major Johnson, 21, based his decision to join the case on his desire to inspire change. While law is not his main interest, Johnson said, it wasn’t until he signed on as a plaintiff that he realized how big an impact he could make.

“I was at an event a while back that pertained to the case and while I was walking to the restroom, a lawyer stopped me and said ‘thank you,’ and asked to shake my hand,” he said. “I said, ‘For what? I didn’t do anything.’ He said, ‘You’re being honored in a room full of lawyers, you did more than you think.’ I wish I would’ve remembered his name, because him saying that to me plays in my head every day. I say that to say this: Even if you feel like what you are doing is insignificant and is just something small, the impact you can have with that insignificant action can move mountains.”

“We have 8,000 students on campus that call Prairie View home, yet when decisions like when they’re going to be able to vote and their access to the polls come about, they’re left out of the equation.” – Jayla Allen

As these students take their place in history, they acknowledge leaning on alumni and community members for advice and wisdom. Johnson said speaking with alumni has made him want to do more and hopes he will pass down knowledge to future generations.

“Talking to alumni and hearing them talk about similar situations like this happening to them while they were students at the university made me want to get out, vote and help better the situation,” he said. “I feel talking to mentees and the younger generation about what happened and the power we have would be great. I honestly would do anything to help a younger generation have a better opportunity, especially if it’s helping somebody that looks like me. We don’t get too many chances for advancement, so for me to not do it would be an injustice to them and myself.”

Since joining the lawsuit, these students have been frustrated and disappointed. From denied motions to angry community members, they have learned firsthand that certain people oppose their views and actions.

“I have been approached rudely by someone in the county,” Smith said. “They were not pleased that I was on this lawsuit, but I understand that when it comes to making a difference and making change, everyone is not going to agree with you. You can go all the way back to the civil rights movements. With Black activists, not everyone was pleased with what they were doing. It came with backlash. But I’d rather receive backlash for something that is going to make a difference not only for me but for the generations to come.”