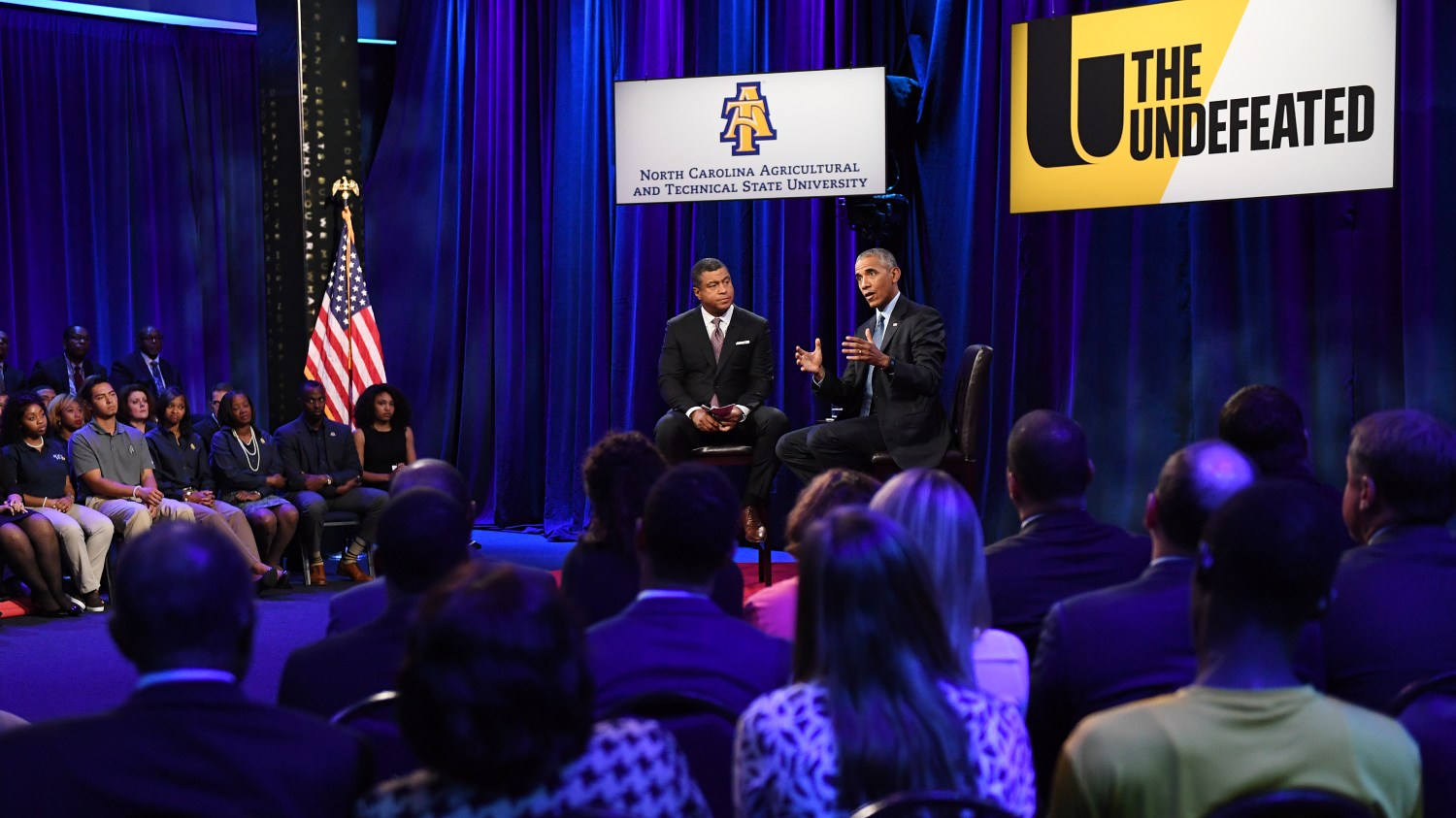 President says ‘protest is fine, but becomes more profound if activists know the change they are seeking’

President Barack Obama, appearing Tuesday on the campus of the nation’s largest historically black university, urged young people concerned about social change to get engaged and educated before pursuing their own path of activism.

With increasing numbers of athletes, from the professional ranks down, taking part in protests of the national anthem and joining others in speaking out on issues such as police violence, Obama cautioned that students should not feel compelled to employ the same style or tactics.

“How you do it is less important than your commitment to use whatever platforms you have to speak to not just issues of just racial injustice, but to speak to issues of discrimination against Muslims or sexual assault on college campuses or a whole host of issues that we confront on a day-to-day basis,” Obama said during a town hall meeting hosted by The Undefeated at North Carolina A&T University in Greensboro, North Carolina, and aired on ESPN.

Some might choose to protest. Others might mentor, the president said, in response to a question from Sam Hunt, a junior on the A&T basketball team. “The ability for you to mentor some 8-year-old or 10-year-old kid who lives right around here. Maybe he doesn’t have a dad, doesn’t have a lot,” Obama said. “You paying attention to him and you’re a star guard on your team, you taking him to a ballgame and asking him how he is doing in school. That is revolutionary.”

As a young man growing up in Hawaii, Obama, a backup guard on a high school team that won a state championship, said he had a full roster of athletic heroes. And their activism made a lasting impression on him. Two of his favorites were tennis star Arthur Ashe and boxing champ Muhammad Ali, black men whose styles could not be more different but whose examples helped Obama understand “what it meant to be a man.”

Ali was boisterous and brash and, early on, a member of the separatist Nation of Islam. He risked jail by refusing to serve in the military. The bespectacled Ashe was soft-spoken, studious and had the mien of a college professor. He joined the Army ROTC while attending the University of California-Los Angeles and after graduation worked at the military academy at West Point.

But both Ali and Ashe were transformational, Obama said. Ali used his unparalleled popularity as a boxer to become an outspoken activist for racial justice and the independence and dignity of African-Americans, before becoming a global humanitarian. And even as Ashe found fame in the mostly white world of professional tennis, he became a vocal critic of South Africa’s racist apartheid regime. And after he contracted AIDS through a blood transfusion, he worked to further awareness of the disease.

Obama, who cut his teeth as a community organizer on the far South Side of Chicago, applauded the awareness that leads people to become activists. But he also urged young people to think through the type of change they want to see. Protest is fine, he said, but it becomes more profound if activists know what change they are seeking.

During his remarks at A&T, Obama also defended his administration’s record of support for the nation’s historically black colleges and universities (HBCUs). Some advocates of the nation’s HBCUs have been disappointed in Obama for not targeting them for more federal funding, and for raising the sensitive issue of low graduation rates and high student loan default rates that bedevil many of them. They also blame the Obama administration for tightening lending criteria for the Parent Plus loan program, which caused the parents of an estimated 28,000 HBCU students to be rejected for the loans, throwing their college careers into chaos. The administration later relaxed those new standards.

Obama noted that the nation’s 105 HBCUs now receive more than $4 billion in direct funding from the federal government, and that many millions more flow to the campuses because of his administration’s work to expand Pell Grants for low- and middle-income students. He said the move to tighten Parent Plus loans was envisioned as a way to ensure that the families of students at HBCUs did not fall too far into debt on the loans, which have higher limits and cost more than other types of higher education borrowing.

With his presidency winding down, the president said, he is working on plans for life after leaving the White House. After some sleep and a nice vacation, he said, he plans to work closely with his My Brother’s Keeper initiative, a program he established two years ago that provides mentoring and other help to at-risk young men in 250 communities around the country. He also said he plans to establish a program to help develop leaders and channel activism into tangible change.

Obama’s appearance at A&T, a campus that helped spark a wave of student civil rights protests in the early 1960s and now is the nation’s top producer of black engineers, cheered many students and alumni. Although students were on a two-day break from classes, the campus buzzed with activity in the hours before the president’s arrival. And afterward, many were pleased that they had been acknowledged by the nation’s first black president.

“What better motivator for our students than to have a sitting president come onto our campus,” said Velma Speight, a former Board of Trustees chairwoman who graduated from A&T in 1953, when the state was still in the grips of segregation. “Just his presence here offers these young people a lot of hope.”

This Story Tagged: Barack Obama North Carolina A&T Aggies A Conversation with The President Most Undefeated 2016