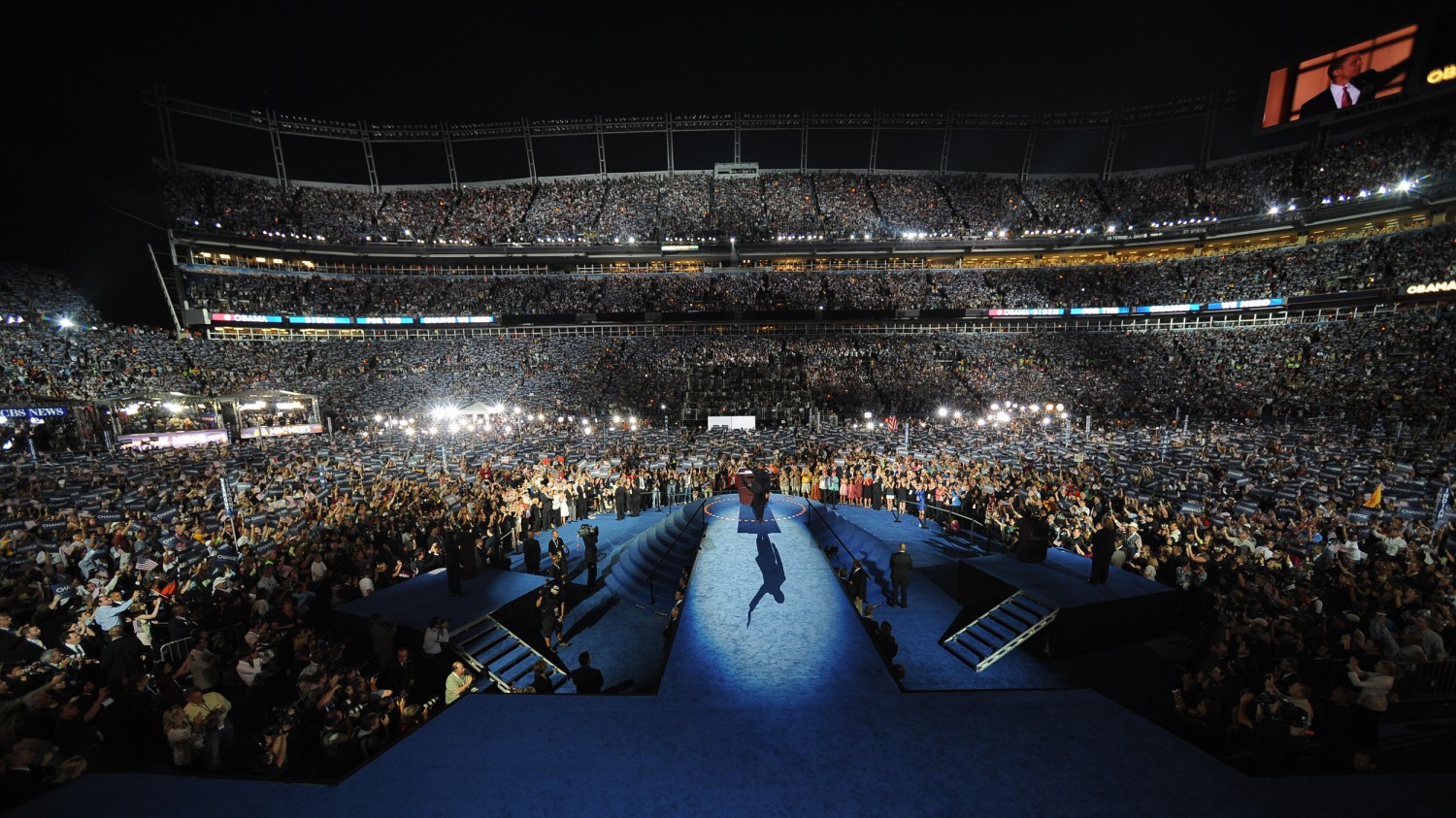 Democratic Presidential candidate Barack Obama addresses the audience at the Democratic National Convention 2008 at the Invesco Field in Denver, Colorado, on August 28, 2008. Obama tonight summoned Americans to join his crusade for political change as he claims his place in history in a dazzling finale to the Democratic convention. STAN HONDA/AFP/Getty Images

President Obama’s legacy is set in stone despite unprecedented opposition

We’re out of Iraq, we have Obamacare, federal sentencing is reformed among other accomplishments SOCIAL: Obama’s legacy began when he showed he was more than just ‘articulate.’

In July 2007, then-U.S. Sen. Barack Obama spent some time talking to the William Monroe Trotter Group of African-American columnists at the National Association of Black Journalists convention in Las Vegas.

He did this at a time when he was trailing his main rival, former first lady and U.S. Sen. Hillary Clinton, by double digits in the polls.

It was also a time when African-American voters — many of whom had witnessed the 1984 and 1988 campaigns of Jesse Jackson, whose freelance diplomacy and fiery rhetoric failed him short of the White House — were in no mood to cast a symbolic vote after the catastrophes of the Iraq War and Hurricane Katrina under the watch of George W. Bush. They favored Clinton by around 16 points.

It was a time when the media persisted on pushing the narrative of him being more rock star than rocket scientist when it came to him being a serious contender for the highest office in the land.

“Obama’s the Big Man on Campus,” read a headline in The New York Times, about his visit to George Mason University and his welcome from a throng of sign-waving students.

“He is the only African-American in the race, and on the campaign trail, he is being treated like a rock star,” read part of a CNN political ticker.

Then there was Nathan Gonzales of Inside Elections, who said that Obama was “ … like a rock star in at least one respect — he’s received a ridiculous amount of attention for largely superficial reasons.”

“Let’s face it, most people don’t know much about Barack Obama, except for that he’s articulate, he’s black, and he gave a timely speech at the 2004 Democratic National Convention.”

That’s the one that bothered me.

It bothered me because for those who might be inclined to vote, not the giddy millennials and Gen Xers who were filling college venues for Obama, it could hurt because many of the people who Gonzales was referring to might conflate popularity with shallowness.

The way I saw it, that had the potential to sting even worse when the candidate was African-American.

I had seen, far too many times than I care to remember, black people marginalized in exactly the way that Gonzales marginalized Obama — praised for being “articulate” and “passionate,” but not for being analytical and serious.

I had seen such “praise” used to fulfill stereotyped expectations of black people being expected to entertain and enthrall, but not being able to actually solve problems.

So when we sat down with Obama, I wanted to know what he intended to do to get past the hurdle of being painted as a handsome face with no substance. I also wanted to see whether he would come at us, black columnists who often took a lot of flak for writing about the issues and problems facing our communities, with real ideas and not afterthoughts that would validate the narrative that was being foisted on everyone at the time.

Obama the candidate did not disappoint – and years later, for the most part, he did much of what he told our group he would do if he, a long shot at the time, actually won.

The first question, asked by Derrick Jackson of The Boston Globe, was whether he thought a law allowing sentencing disparities between possession of crack cocaine versus possession of powder cocaine, was a mistake, and what would be his first act as president to fix it.

“Yes, it was a mistake,” Obama told us. “I remember the political environment back in the ’90s. There was a lot of talk of superpredators, that whole environment in which this was generated, and I gotta point out that I fought provisions like this, [as an Illinois state senator] voted against provisions like this, knowing that they could be exploited politically, because I knew it was the right thing to do.

No shallowness there. And when Obama became president, he made a huge step toward doing that.

In 2010, he signed the Fair Sentencing Act, which reduced the disparity between federal penalties for sentencing someone for crack cocaine versus powder cocaine from a 100:1 ratio to an 18:1 ratio. It also ended the five-year mandatory sentence for simple possession of crack cocaine.

Five years later, in 2015, the U.S. Sentencing Commission found that act, which Obama initially sketched out to our columnist group while he was a fledgling candidate, had reduced the federal prison population, and that fewer people had been prosecuted for crack cocaine.

Then, Newsday columnist Les Payne wanted to know what his timetable would be for pulling U.S. troops out of the quagmire that was the Iraq War.

Said Obama: “My first job is to call together the joint chiefs and tell them that they have the new mission of pulling the troops out of Iraq. Once the process has initiated, I think it builds momentum. If you talk to most of the generals privately, they will say that we’re proud of the job we’ve done, but this is not a sustainable mission.

“It won’t be easy. It will be a mess. But the key will be to set a message for the commanders on the ground that it is their job to get us out of there.”

No shallowness there. By December 2011, the last U.S. troops left Iraq, and a drawdown of troops in Afghanistan began that year.

Elmer Smith of The Philadelphia Daily News asked Obama about the viability of his campaign, especially since he didn’t seem to be receiving much African-American support.

Obama said that he was focusing on the early state primaries, not the national polling numbers — because it didn’t make sense to do that when Clinton was more well-known than him. He said that he believed he could win because he was already tied in Iowa and winning in South Carolina.

Such early wins, he said, would persuade African-Americans.

“Black folks are not sure that this can be done,” Obama said. “I don’t assume I’m going to get 100 percent of the African-American vote, and I shouldn’t, because the black community is diverse, and there’s a loyalty [to Clinton] that predates me. But I think that by the time we get to South Carolina, we’re going to do very well in getting the lion’s share of the African-American vote.”

He was right. He won 55 percent of the vote to Clinton’s 27 percent. Eight in 10 black voters in South Carolina cast their vote for him.

No shallowness there. Nothing but strategic thinking – the kind that led him to win not one, but two presidential elections.

Obama also talked about, in response to a question from Tanette Elie of the Milwaukee Journal Sentinel, how affordable health care was part of the solution to rising poverty and inequality.

We all know what happened there. The Affordable Care Act. Among other things, it cut the numbers of uninsured Americans in half and made it so that insurance companies cannot deny coverage to people with pre-existing conditions.

Then I had the last question, or rather, a concern. I wanted to know whether the rock-star label had hurt his campaign.

“Now I have to say that’s the first time in my life that after teaching constitutional law at the University of Chicago, and graduating at the top of my class in Harvard, that I’ve ever been accused of not being substantive.

“So then we put out a health care plan, and we put out a detailed foreign policy speech, so now people are not saying substance, because I’ve added much more detail than Hillary Clinton, so now it’s shifted to inexperience, and it’s showing in terms of his foreign policy …

“But I think that when the press really starts to pay attention to these arguments, the rock-star label will disappear.”

On one level, it didn’t completely go away.

Despite his legislative accomplishments, many of which he described to our group that day, Obama continued to have to fight off attempts to portray him as an empty suit.

The detractors who at first tried to use his articulateness as performance instead of policy persuasion quickly denigrated him for using teleprompters — as if it was an anomaly for anyone, politician or no, to use them. Many still couldn’t let go of the idea that there had to be something in this black man that wasn’t right — that there was no way that this man made it past the rules and double standards that white America created to trip up people like him dare think he could actually become its leader.

To be sure, Obama leaves quite a legacy of accomplishments as president, especially in the face of unprecedented obstruction. But to me, one of the greatest parts of his legacy is that he faced down a conundrum that many accomplished and idealistic African-Americans face.

It is the one in which white people marginalize ambitious, charismatic black people as either curiosities or worse, as suspect. Seeing Obama as a curiosity, or rather as a “rock star,” was, in many ways, a backhanded way to entice many voters early on to see him as more magical than real, as a thing to marvel at instead of taking seriously, or to even think that there was anything about him worth taking seriously.

To see Obama’s looks and his achievements as being a cover for something that must be wrong instead of being the result of something he did right is, sadly, part of the irrationality that is racism in this country.

Yet it was clear, by the time that Obama finished his meeting with us, that he understood that age-old challenge.

Tonyaa J. Weathersbee is a multiple award-winning columnist and multimedia journalist now based in Memphis, Tennessee. To learn more about her work, go to www.tonyaajweathersbee.com.