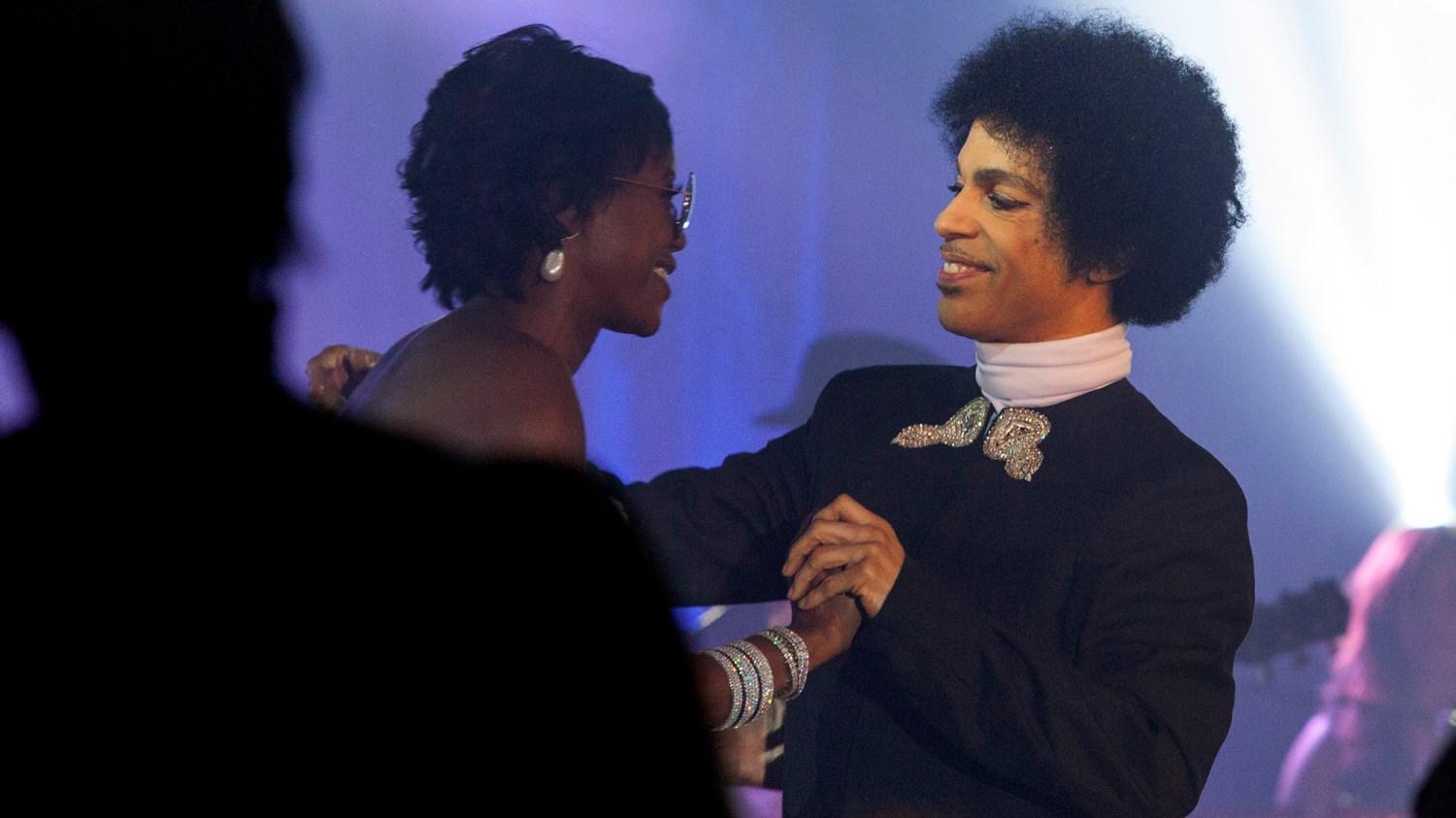 Mellody Hobson is pulled on stage with Prince during the George Lucas and Mellody Hobson’s wedding reception at Promontory Point on Saturday, June 29, 2013 in Chicago. Barry Brecheisen/Invision/AP
Prince

I met Prince. And he told me something with a look. And I got it.

I’ve been an entertainment reporter for 17 years. Nothing and no one has ever given me pause.

As a member of the National Association of Black Journalists, I attend an annual convention that we host every summer. I was one of 10 journalists invited to sit down with Prince at his home, Paisley Park. It was a free-for-all discussion about anything and everything.

The circumstances caught me off guard. My expectation for that evening was to dance in Prince’s home at a party his estate was hosting. I thought I’d marvel at artifacts — such as the motorbike from Under the Cherry Moon hanging over a door — in the various wings of his palatial space in Chanhassen, a suburb outside of Minneapolis, Minnesota. But I happily obliged this invitation to “sit down” with one of the world’s most influential musicians of all time, and tried to shift from fangirl to respected entertainment journalist.

I’m not sure how well I fared at the latter.

Because when I first saw him I reverted back to the little girl whose young uncle sneaked her into a theater on Detroit’s Westside to see Purple Rain back in 1984. In Minneapolis, I was about to shake The Kid’s hand. And for the first time in my journalistic life, I had to force myself to maintain professionalism.

Prince doesn’t participate in many interviews; he lets his music do the talking. And because he tends to be more recluse than anything else, we’re not acutely aware of how he views the world or even what his favorite snack is. He was relatively new to social media (he joined Twitter in 2013), and would delete a tweet before most people even had a chance to see it. He actually tweeted me once when I asked him about new music — which blew up my mentions — and then he deleted the tweet before I had to chance to get my brag on.

Prince was fed up. He said he was sick of institutionalized racism. He said that what was happening in 2015 was reminiscent of the fights of the generation before his generation.

But that night in Chanhassen, he engaged with us — journalists from places like MSNBC, NPR and ESPN. We were set up around a conference table up the stairs from Studio A. Studio A is where I shook his hand, heard him acknowledge his doves (they’re very real) and the place, I presume, he crafted so many delicious hits. Prince, whose natural hair was picked out to the gods, had a smile that melted my very core. He sat next to me at the head of the table, and shared with us why he decided to get involved in the Freddie Gray fallout in Baltimore. He talked about why he wrote Baltimore in protest of Gray’s while-in-police-custody death.

Prince was fed up. He said he was sick of institutionalized racism. He said that what was happening in 2015 was reminiscent of the fights of the generation before his generation. He also had a very personal fight — one that was long-standing and that unfortunately, was not resolved the way he’d hoped before his untimely death at 57 on April 21.

That night in his home, Prince stated clearly that he felt taken advantage of as an artist. He was well aware of his influence — Lenny Kravitz became Lenny Kravitz after seeing Prince wow audiences performing rock music as a black man in skintight pants; contemporary acts like Janelle Monae challenged the music industry to listen to a tuxedo-clad woman rocking a pompadour hairstyle and performing nongenre-specific music in large part because of Prince. But where he needed validation most — from a larger mainstream world that had deep pockets and controlled the trajectory of musical careers — he did not feel he got it.

That night, the man who at 5-foot-2 had the largest presence in any room he walked into, talked openly, frankly and unapologetically about his fight with record labels (he likened musical contracts to slavery) and he expressed his disappointment with streaming services who offered him a fraction of what they paid for the Beatles catalog. He said that The Beatles were paid some $400 million for their art on iTunes, and that even though he has as many albums, he wasn’t offered anywhere near that. One journalist asked him if he felt it was because he was black, and they were white.

He shot us all a “what-do-you-think?” kind of look.

Well, Prince, eight months later, here’s what I think: It was brave of you to have a voice. Sometimes — and I know this from covering celebrities and musicians for as long as I’ve been doing it — civilians want you to shut the hell up, enjoy your millions and your legacy and only open your mouth when they say so. I think it says a lot about you that your fight with record labels and streaming services (he signed with Jay Z’s TIDAL, which he championed that night as a service that benefits artists) had more to do with compensation for the generation after you than your own bank account.

I also think you felt comfortable in a room of journalists you’d never met before because we looked like we could have been in your family. Here you were, an icon, but I wasn’t afraid to make a joke at my own expense to you, and you weren’t too untouchable to laugh at it. At one point Prince said that we should wrap up our hourlong chat so that we could spend our Saturday nights however we planned to spend out Saturday nights. Smartly, I looked at him and said, “I’m perfectly happy spending my Saturday night with you. I’m happy with my life choices.” He looked and me, grinned (I was putty) and laughed at me and with me. Prince was like kinfolk. Kinfolk in a glittery gold lame pantsuit, but kinfolk all the same.

Prince appealed to millions and millions of music listeners. As I write this, I’m getting text messages from friends who are white, black, Asian American, Latino American and Middle Eastern: all of them torn up over the death of a musician who soundtracked our lives. But I think as Prince got older, even as he became more famous, he understood that sometimes when you tell your story to someone who looks like you, someone who, perhaps, has walked down a similar path, you get understood.

You pick up on inferences.

You get someone on the other side of the table who gets what a simple look means.

You get to talk with someone you just don’t have to explain (anything) to.

You get a chance to intimate that something may be amiss because of the color of your skin.

I was impressed how after our interview he didn’t just talk to major mainstream outlets who largely employ mostly white journalists to tell his story. He invited Ebony to sit down with him, and an NABJ friend, Arienne Thompson, to open up to.

When I met Prince on that surreal night, I was working for another outlet, in a job I loved with journalists who were doing amazing work. Since then, I’ve moved over to ESPN’s The Undefeated, a project that allows me, a black journalist, to use my experience as a black woman, as I do my work. This new project values my lived black experience.

Writing about Prince’s death certainly was not the first byline I expected to have here at ESPN’s The Undefeated. It was my hope that at one point, I’d be able to go back to Paisley Park and sit down with Prince for a deeper, one-on-one conversation and do exactly the type of work I have planned for The Undefeated. I’m here to tell stories of black folks in entertainment, because I get it.

I get that even when you are one of the world’s most famous musicians, a man who has made many millions singing songs that will last many generations, you need someone who gets when much of what you have to say is inferred with a quick head nod.

Rest in Peace, Prince. Everyone is hearing you today.