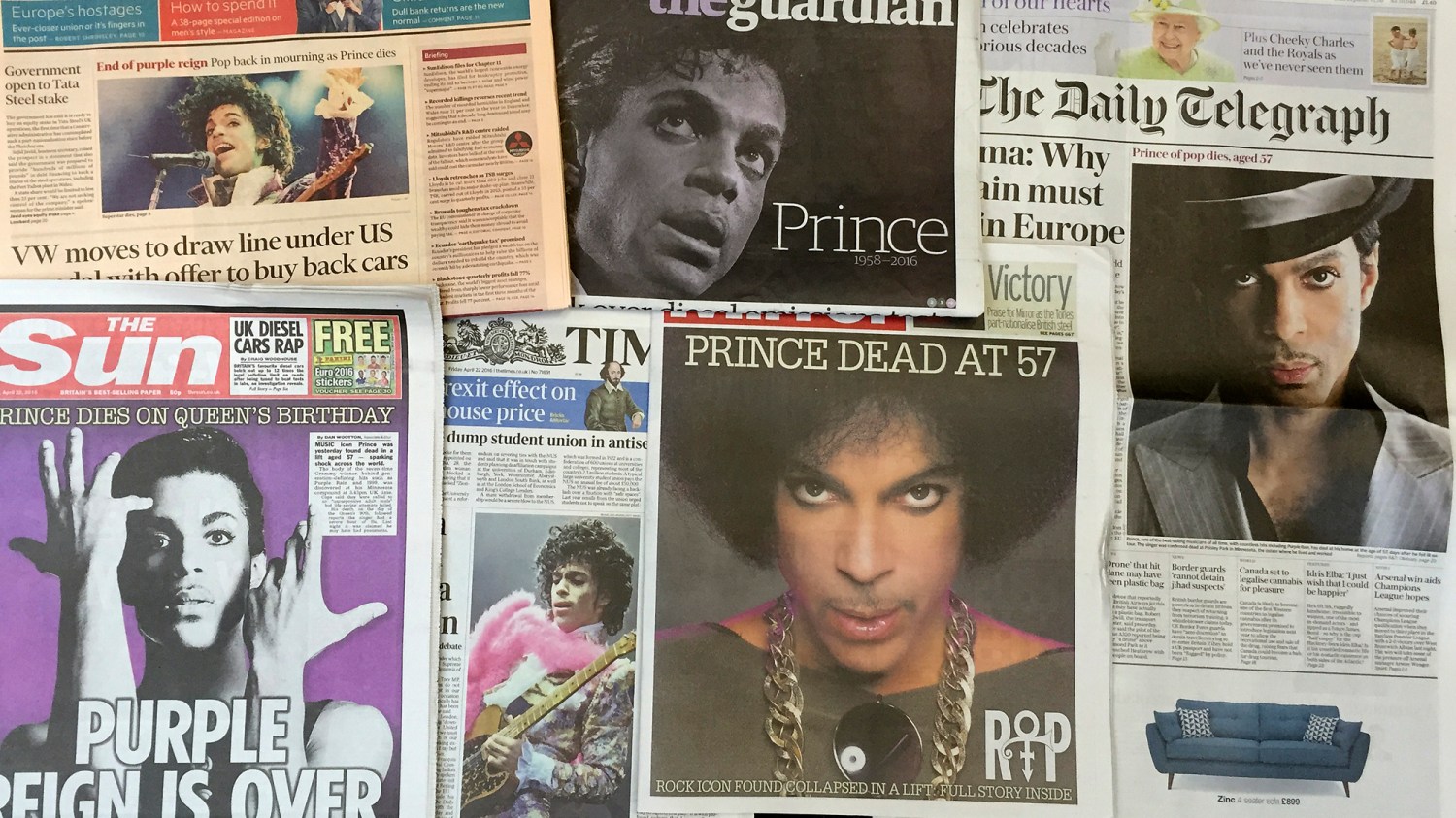 A curation of essential Prince reading

When Prince Rogers Nelson died on April 21, the world collectively mourned the man who so often connected with it on his own otherworldly level. From his first interview as a teenager in 1976 to posthumous tributes by the likes of Stevie Wonder, from The Paris Review to Vibe to The Offing, this list of reviews, articles and interviews are a map of Prince’s magnetism and how he chose — and chose not to — interact with the people who loved him most.

Prince’s first known interview. “He plays several instruments, such as guitar, bass, all keyboards and drums. He also sings sometimes, which he picked up recently. He played saxophone in seventh grade but gave it up. He regrets he did.”

“All cocky, teasing talk about sex, that’s Prince. Forget Mr. Look So Good; meet the original Mr. Big Stuff. He’s afraid of nothing onstage: ready to take on all the desires of a stadium full of his lusty fans, ready to marry funky black dance music and punky white rock music after their stormy separation through the ’70s, ready to sell his Sex Can Save Us message to anybody who’ll give his falsetto a listen.

“These may not be the absolutely accurate details of Prince’s upbringing, but the song’s lyrics ring true emotionally. Prince has chosen to reveal himself to us in a more meaningful manner than the sexually explicit verbal striptease of his best-known earlier songs. Perhaps he finally feels enough distance between who he is and who he was. In any case, the hard-hitting lyrics give his Purple Rain album a highly charged text to work from, and the music feels equally intense and equally liberated, the best of Prince’s career.”

“I don’t live in the past. I don’t play my old records for that reason. I make a statement, then move on to the next.” — Prince

“With his mass of carefully tended, black curly locks and his large, dark doe eyes, he looks, in repose, like a poster of Liza Minnelli on which someone has lightly smudged a mustache. When astride his large motorcycle, as he is from time to time, the image suggests one of Jim Henson’s special effects from a Muppets movie: Kermit the Frog on a Harley-Davidson. In the depths of depression, pacing back and forth in his dressing room, he expresses all the pent-up rage of a caged mouse.”

“Prince: The Story Behind his Passion for Purple and Privacy“

“He certainly knows how to manipulate his own public image. Persons close to him speculate that he himself, inadvertently or deliberately, sparked the rumors that he is gay by affecting exaggerated mannerisms and wearing outrageous stage attire and heavy makeup. Those who know him well doubt very seriously that he really is gay. ‘He’s just being Prince,’ they say.”

“Prince Talks: The Silence is Broken“

“Tooling through the neighborhood, Prince speaks matter-of-factly of why he toyed with early interviewers about his father and mother, their divorce and his adolescent wanderings between the homes of his parents, friends and relatives. ‘I used to tease a lot of journalists early on,’ he says, ‘because I wanted them to concentrate on the music and not so much on me coming from a broken home. I really didn’t think that was important. What was important was what came out of my system that particular day. I don’t live in the past. I don’t play my old records for that reason. I make a statement, then move on to the next.’ ”

“ … this is what I choose to be called. You find out quickly who respects and who disrespects you. It took Muhammad Ali years before people stopped calling him Cassius Clay.”

“Prince’s music was so picturesque that even I could see it.” — Stevie Wonder

“The Tao of Prince“

The man Prince selected to develop his memoir — the status of which is now uncertain — attempts to understand the artist: “The most convincing explanation of Prince is a tautology, something you’d hear from a stoned teenager: Prince is, like, Prince. At the risk of sounding more like a stoned 20-something, I’ll call him a man of dialectics, a brazen mess of binaries. He’s the living refutation of Lincoln’s ‘House Divided’ address. A house divided against itself can stand, Prince says, and it’s a great place to throw a party.”

“The Very Black Politics of Prince“

“But the Look came before. It was pre-reveal. Or maybe still post-reveal — after all, Prince is not and has never been bound to the same temporal order as the rest of us. In any case, it doesn’t matter. There’s another knowing there. Though conspicuously edited out of the official online Grammys award recap, the Look prefaces the carefully delivered statement that followed: ‘Albums … [another look] … still matter. [another another another] Like books and black lives, [more more more] albums still matter. Tonight. [look+grin] Always.’ ”

“Then again, your government name was meant to be aristocratic confidence-booster enough. I got a boychile comin’ / He’s gonna be a sonuva gun. Papa Nelson was clearly feeling mighty prophetic, cocksure his progeny would justify being declared at birth a knight of The Realm — that anointed place, unambivalently sacred and profane, liturgical and low-down, where Dukes, Counts, Barons, Sun Gods named Ra, and three guitar-strangling Kings abounded.”

“Prince on the Kardashians: They would never be invited to a Prince party.“

Prince once had a cameo on the Fox show New Girl. What’s hilarious is that the Kardashians were slated to appear on the same episode. Prince wasn’t having it, even going so far as burning the Kardashians’ scripts.

“I Wore a Raspberry Beret“

“I said: ‘What do you want me to call you?’ He said: ‘My friends don’t call me anything.’ I rolled my eyes. I rolled my f—— eyes at Prince. He laughed. He wouldn’t take his dark glasses off. As we sank into it, I complained. I told him I couldn’t see his pretty eyes, that I had been waiting on an island to see them, all my life. He shook his head, teasing me. So I looked straight at him through those glasses for the rest of the interview, so he would have the impression I was looking into his eyes. He realized what I was doing; became amused, restless. Wagged his finger at me: ‘You’re clever’. Took the glasses off. Sighed at my delight: like a striptease. Put them on again.”

“Prince in the Nineties: An Oral History“

“There was a guy who worked at Paisley who wore unusually short cutoff shorts. It was just these hairy white legs. [Michael Bland] was passing that guy in the hallway and Prince was talking to somebody on the phone downstairs, and he ended the conversation by saying, ‘Yeah, and tell that dude the next time he comes to work with those Daisy Dukes on, he’s done.’ ”

“Prince’s music was so picturesque that even I could see it. I could see his boss Mr. McGee, who thought Prince was never going to be s—. I could see Old Man Johnson’s farm. I could feel that ‘Purple Rain’ too. Prince’s songs were that vivid, the images were that strong.”

“He tries to explain why he can imagine playing into old age, with a dizzying detour into mysticism via the Wachowskis. ‘If you can’t think all the way back eternally, you can’t think all the way forward eternally. Everybody usually thinks about a beginning, a big bang. If you take that event out, then you can start to see what eternity is. Remember in The Matrix where they said the only thing that has an ending had a beginning, and vice versa?’ ”

“We danced and sang and f—– and pretended not to notice while Michael and Prince killed themselves for us … We like suicide as long as it is martyrdom. We are only shocked by the swift and sure final act that renders the black body unavailable for use by others. That says — this suffering will not be endured.”

Tierra R. Wilkins is an associate editor for The Undefeated. She likes to eat fries with her ketchup.