Black historians, activists and athletes discuss how they would replace the problematic landmarks

Maj. Gen. Philip Schuyler was a major general during the Revolutionary War and a statesman, but he also owned between eight and 13 slaves who worked on his sprawling estate in Saratoga, New York. Owusu Anane, a teacher, coach and the youngest councilman in New York’s capital, believes the spot in front of City Hall should go to World War I hero Henry Johnson. A member of an all-Black unit in New York’s National Guard, Johnson came under attack while on watch at the edge of the Argonne Forest in France in May 1918. Using only the butt of his rifle, grenades, a bolo knife and his fists, he fought off as many as two dozen German soldiers. Johnson rescued a fellow American soldier from capture, saved the lives of the others at the post and suffered 21 wounds. “Despite his well-publicized heroics on the battlefield, this country has only recently begun to recognize the significance of his contributions,” Anane said. Johnson was not awarded a Purple Heart until 1996, more than 65 years after his death.

A staunch segregationist, George Preston Marshall refused to integrate the Washington Football Team until he was forced to by U.S. Attorney General Robert F. Kennedy and Interior Secretary Stewart Udall in 1962 – the pair threatened to tear up the 30-year lease on the stadium, which was built on federal land with federal money. Reggie Cunningham says the man who integrated the team, receiver Bobby Mitchell, should be honored where Marshall’s vandalized memorial was taken away by crews with little fanfare. “For so long the Washington team was a monument to the Confederacy in and of itself because [Marshall] refused to integrate,” Cunningham said. Having the memorial to Marshall, who so despised the thought of adding Black players, replaced by one to Mitchell, who died earlier this year, makes it that much sweeter.

There used to be a 75-foot tall obelisk and two other statues to Confederates on the lawn of the state capitol, but on Juneteenth protesters began taking them down. They didn’t finish the job that night, but within days the monuments were gone. William Sturkey says a new statue should be erected to those enslaved in the state. “At the time North Carolina seceded from the Union, one-third of the people in the state were enslaved. Those are literally the people who have been erased.” As for what it would look like: “Certainly it should be a design that doesn’t make Black people [appear] subservient to white people,” like the now-removed Emancipation Statue in Boston, which showed President Abraham Lincoln with a freed Black man kneeling at his feet.

The carving of Confederate leaders Gen. Robert E. Lee, Gen. Thomas “Stonewall” Jackson and Confederate president Jefferson Davis, into a three-acre mountain memorial stands as the “granddaddy of Confederate monuments.” Completed in 1972, it was part of a wave of Confederate monuments erected in response to the civil rights movement as a show of “massive resistance” to desegregation. It was meant to be provocative, said Nell Irvin Painter, who called it less a memorial than “a statement of the domination of one segment of Georgia’s population over another while it disappeared Native Americans.” She says it should be erased, “but it should not be replaced with another piece of art. The people of Georgia are deeply divided over definitions of its citizenry and over tastes in art. Better not to stir up those divisions. Better to return Stone Mountain as close as possible to its original state as an amazing work by the earth that we all belong to.”

Damien Woody knows exactly who should be honored on Richmond, Virginia’s, Monument Avenue once the elaborate statue to Davis is completely removed: Maggie Walker. Walker spent her entire life in Richmond and “she’s an icon back home,” Woody said. In 1903, Walker chartered the St. Luke Penny Savings Bank and became its president, becoming the first Black woman in U.S. history to do both. Before starting the bank, she was a teacher. “Pure elegance and power, dressed to the nines!,” Woody said of Walker. She is indeed worthy of reverence, certainly over Davis, the president of the Confederacy and a man who owned more than 100 slaves.

Mayor Frank Rizzo was Philadelphia’s police commissioner and then a two-term mayor who was racist and anti-gay. During his tenure as head of the police department, hiring of Black officers declined sharply, the department’s relationship with Black residents was volatile and he ordered the Black Panther Party’s offices raided in 1970, just before its constitutional convention was to begin in the city. After protesters tried to take the statue down, the city removed it on June 2. Given Philadelphia’s history, Claire Smith believes there are many worthy of a place of honor instead: “There are so many great possibilities,” she said. “I would lead with Wilt Chamberlain if it is to be a sports figure. For the arts, opera immortal Marian Anderson, who famously was invited to sing at the Lincoln Memorial after being barred from Constitution Hall by the Daughters of the American Revolution. For historical impact, Harriet Tubman.”

Some in Alabama were so devoted to the Confederate Soldiers and Sailors Monument that the state; attorney general filed a lawsuit against Birmingham after the city council voted to take it down, citing a 2017 law passed specifically to make sure it was never taken down. But the mayor opted to pay the nominal fine to keep it down. Patrick Claybon wants to see the Black iron workers of Birmingham, who formed a majority-Black, multiracial union that endured the violence of the local Ku Klux Klan, get the place of honor. “[The union] would sometimes have a Black president and white vice president. The unity enraged the company [Tennessee Coal, Iron and Railroad Co.] and the Klan,” Claybon said. “The statue would be Black union steelworkers and miners, standing tall against incredible odds and injustices.”

Protesters pulled down the statue of Francis Scott Key in June, cheering as it was flipped off its base. The monument to Key, most famous for writing the words to “The Star-Spangled Banner” but infamously a slaveholder, had stood in Golden Gate Park since 1888. Ameer Hasan Loggins believes that instead of one person, a group should be honored: those who took over the San Francisco State College campus in 1969, a sustained student strike that left many bloodied at the hands of police. “It led to the birth of the first Black studies department in the country,” Loggins said. “It plays into the importance of collectivism, intergenerational activism and the oft-ignored role of community folk in campus-based rebellions.” After a five-month strike, the college established the first college of ethnic studies, and campuses across the country would follow suit over time.

Lonnae O’Neal contributed to this story. 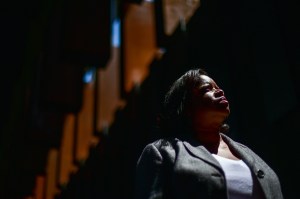 A national lynching memorial recognizes the domestic terrorism that killed my great-great-grandfather. By Karin D. Berry 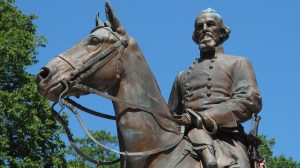 WATCH: City of Memphis gets rid of two Confederate statues after campaign By Kelley D. Evans 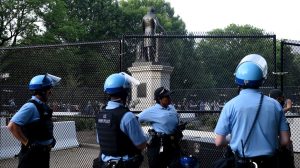 All statues aren’t created equal; some need to remain standing By Jonathan Eig