Rajon Rondo: ‘I still want to compete at a high level’

“I’m feeling young. I feel like the ‘OG’ or ‘Triple OG’ to some guys,” Rondo told The Undefeated before Sunday’s 96-82 road loss to the Golden State Warriors. “I played in Darius Garland’s hometown of Gary, Indiana, back in high school and I think he was barely born. We shared a couple stories the other night after dinner. I was getting to know them. And after hearing how they viewed me, I was like, ‘I’ve been playing for a long, long time.’

“It’s humbling. A lot of these guys are closer to my kids’ age than me. I came in at 20 and had a vet like Kevin Garnett at 31, 32 years old. I want to have the same kind of influence on these guys and help them win and build a culture.”

The steak dinner took place four days after Rondo was traded to the Cavaliers from the Los Angeles Lakers as part of a three-team deal. The four-time NBA All-Star won championships with the Boston Celtics in 2008 and the Lakers in 2020. The 16-year NBA veteran has averaged 9.8 points, 8.0 assists and 4.6 rebounds in 939 career games.

Rondo had a third-string point guard role with the Lakers, averaging 3.1 points, 3.7 assists and 2.7 rebounds in 16.1 minutes per game this season. In trading Rondo, the Lakers could potentially save $4 million in salary and luxury tax fees or use the roster spot to sign forward Stanley Johnson, who is currently thriving on 10-day contracts.

Rondo was open-minded when he initially got wind of the potential trade from his longtime agent Bill Duffy. Lakers general manager Rob Pelinka eventually gave Rondo the official word during a positive conversation. While Rondo didn’t want or ask for a trade, he was yearning to play and was excited about the opportunity to do that in Cleveland. 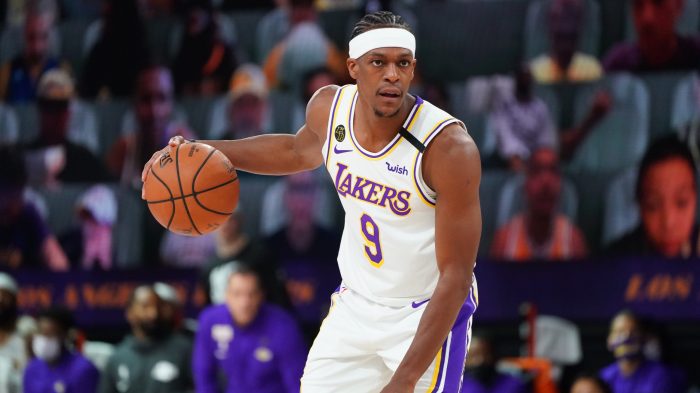 Rajon Rondo: ‘It’s been very emotional for me the last couple of days’Read now

“I still want to compete at a high level,” Rondo said. “I’m still a competitive person. I was fine in LA. But at the same time, for my mental sake, I do think I will be a lot happier because I do like to compete and be involved. And here I will get an opportunity. It’s all about perspective. I always look at things a couple of different ways. But for me, personally, I wasn’t going crazy on the bench over there, but I was itching to play and have more of an impact.

“Obviously, I knew what my role was going in with the Lakers. But when you get into the fire, you want to be a part of it. And here, I know what my role is. I’m coming here to get involved, get active and be a great influence on these young guys. Just try to be a pro.”

Rondo has long had a reputation for having a very high basketball IQ, being a coach on the floor, and mentoring and watching film with young players. Back in 2007, it was a star in Garnett who, after arriving in Boston, played the primary role of mentoring a young, inexperienced and unproven Rondo. Garnett actually told the Celtics he didn’t want them to include Rondo in the trade that acquired him from the Minnesota Timberwolves in 2007.

The Celtics opened the 2007-08 NBA season with an All-Star trio of Paul Pierce and newcomers Garnett and Ray Allen. The big question mark was Rondo at point guard. But Garnett confidently told the media that Rondo was going to be a great point guard for Boston, and he was, as Boston won a title in 2008.

Rondo fondly recalls those days with Garnett and other Celtics veterans taking him under their wing. He has embraced doing the same during his veteran years.

“I’ve taken [mentoring] every year with me,” Rondo said. “I’m the oldest guy on the team here in terms of years of experience. That is what the game is about, is always giving back to the guys below me. That is what was given to me and what [I] pass on.”

The Cavaliers’ main reason for needing Rondo was losing two point guards to injury during this season in Collin Sexton and Ricky Rubio. With a 23-18 record entering Wednesday, Cleveland does not want to derail its realistic playoff hopes. The Cavs haven’t been to the postseason since 2018, but have the talent to get there with Garland, a rookie sensation in Mobley and renowned shot-blocker Jarrett Allen.

Cavaliers head coach J.B. Bickerstaff has told Rondo they wanted him not only for his on-court presence, but as a mentor to their young players as well.

“Rondo brings experience and leadership to help our young team grow,” Bickerstaff said. “He’s support mentally and emotionally that our guys can depend on. He also brings the combination of things that we value: selflessness and high-level competition.” 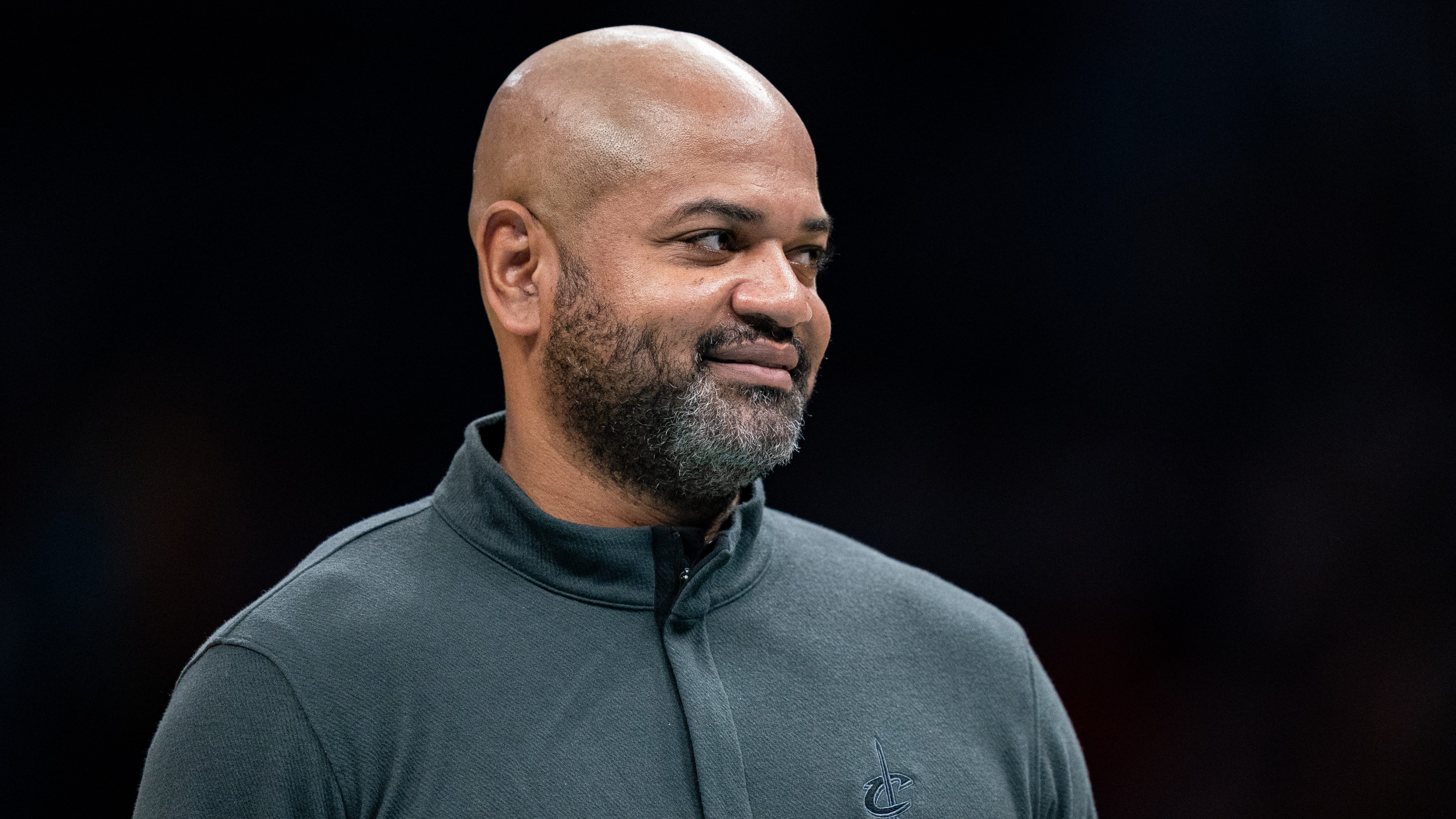 Rondo’s impact on the Cavaliers began from the moment he first joined them during a 114-101 victory over the Trail Blazers. He had 11 points, five rebounds and three assists in 17 minutes off the bench. Some of the young Cavs also geeked out, as Garland said afterward, “Dang, that’s Rondo on the floor.”

“I’m trying to talk to everybody,” Rondo said. “I’m also trying to learn guys’ personalities, where they like the ball. Understand guys’ tendencies, but I don’t want to come in and start barking at guys and giving input. But I do have a close relationship with D.G. [Garland] and we talked briefly about things.

“It will naturally come and grow some through experiences in the world. We’re going to fight together.”

With the Cavs’ injuries, Garland is uniquely now the only guard in the very tall starting lineup. The 21-year-old is hoping to represent the Cavaliers in Cleveland as a first-time NBA All-Star and is averaging 19.4 points and 7.3 assists entering Wednesday’s game against the Utah Jazz.

Garland has been listening to Rondo’s every word since his arrival, whether it’s on the court or over a steak dinner.

“It means a lot to have him with us,” Garland said. “Another vet presence. Another ball handler who gets everyone involved. In Portland, we just kicked it. We had conversations over dinner getting to know each other, doing what teammates do.

El Gaucho is known as one of Portland’s most popular steakhouses and has long been a postgame spot for Trail Blazers and other NBA players in town with its private room and cigar lounge. Rondo initially went there while playing for the Celtics. He said the restaurant provided a quiet, relaxed environment to get to know some of his new Cavs teammates.

“I love to eat. My vets always took care of the bill and let me take care of the bill at a young age,” Rondo said. “But at the same time, that is how you gain camaraderie, everyone loves to eat and you have good conversation. Glass of wine for those that can drink. It’s funny how they ID’d all these guys. They barely have a driver’s license.

“It was late. Wasn’t a lot of people there. Low lighting. Good vibes. I’m trying to introduce them to some things.”

Garnett was 39 during his final season in the NBA in 2015-16 and was inducted into the Naismith Memorial Basketball Hall of Fame last year. Rondo will turn 36 on Feb. 22 and will be an unrestricted free agent next offseason. There have been expectations that Rondo could go into coaching once his NBA career is over, but he still loves playing the game and is focused on helping the Cavs and mentoring the younger players.

With veteran mentors such as Udonis Haslem and Andre Iguodala playing valuable roles for NBA teams, there could be a place for Rondo for years to come in the league.

“I still enjoy the game,” Rondo said. “If I wasn’t even playing in the NBA, I’d be playing pickup basketball somewhere back at the crib [Louisville, Kentucky] or wherever I’m residing. You get an opportunity to play still. My body feels good. I love to compete. I never want to put an end date on when I want to retire because if there is an opportunity like this, I’d love to compete.”