Behind Rajon Rondo’s many assists to his Kentucky home

When a masked Rajon Rondo dropped off groceries to those in need back home in Louisville, Kentucky, the socially distanced recipients always said thank you. And those who recognized him often asked the same thing.

“The first question was always, ‘When is the NBA season going to come back?’ ” Rondo told The Undefeated. “I got a lot of those. I told them, ‘I will know the same time you find out.’ ”

There has been some optimism over the possible return of the NBA after many teams recently reopened their practice facilities. The Los Angeles Lakers reopened theirs May 16, and while Rondo said he has yet to return, he hopes the league will return to action in a safe and healthy fashion soon.

“I want to play. As a competitor, you want to play,” Rondo said. But he also wants to protect his family and the people around him. “Safety first, understanding that life. We can’t take it for granted, even though we are athletes who are some of the best people in shape as far as body and heart condition. But all it takes is one case where a body can’t fight off the virus.”

Rondo and numerous other NBA players have been helping the less fortunate during the pandemic, with Louisville being his main focus. The Rajon Rondo Foundation joined with Lineage Logistics, a provider of temperature-controlled food logistics, and Louisville food bank Dare to Care to deliver more than 250,000 meals. Rondo spent three weeks in Louisville in April packing and delivering meals, as well as distributing gift cards and exercise kits to senior citizens and families with kids involved in his youth foundation.

“There were some people in tears,” Rondo said. “Some people said God answers prayers. I was kind of taken aback by the aid I was able to provide. With that kind of reaction, you just want to be able to do more and bring awareness to what is going on out here. Nobody should go without food. Senior citizens paved the way for us. There are kids and families in need. So, I tried to help as many people as possible.”

Rondo was reminded of the days when his family was struggling to make ends meet during his youth. He and his three siblings were raised in a predominantly black West Louisville neighborhood called College Court, primarily by their mother, Amber Rondo, who worked the third shift at tobacco manufacturer Phillip Morris.

Rondo said most of the meal deliveries have been within an eight-mile radius of where he grew up.

“I went to where I grew up,” Rondo said. “But it doesn’t matter where. What matters is serving people with needs. I delivered the first seven and it was a humbling feeling to give back to people of need. Twenty years ago, that could have easily been me. Siblings at home. Mom, unfortunate situations, laid off not knowing where the next meal was going to come from. …

“[Senior citizens are] vulnerable and their health is at risk. Some were scared to go out in Louisville. Not everyone has kids and grandkids looking after them. My momma had local church and elderly folks that wanted me to drop off some things, and that is what we tried to do.”

Rajon Rondo Foundation executive director Yvette Gentry said it was important for Rondo, and those helping the foundation to pass out food, to be socially distanced and to wear a mask. The foundation also gave protective equipment to those in need.

“Our mission during the COVID-19 pandemic was to provide people with the support they needed to be healthy emotionally and physically,” Gentry said. “The communities we focus on have issues with food insecurity during normal times. We knew that when demand for food and supplies became an issue for everyone, that some people would be impacted disproportionately.”

Rondo started his foundation in 2011, primarily to aid youths in Louisville. The foundation has also helped underserved youths in the cities where Rondo has played during his career: Boston, Chicago, New Orleans and Los Angeles. Rondo’s latest project is a community locker room in Louisville, using a point system that rewards positive behavior and gives them the opportunity to earn clothing, shoes and other items. He hopes he has inspired kids who have benefited to help others when they are older.

Jefferson County, Kentucky, Circuit Judge Derwin Webb, who is on the Rondo Foundation board, said the veteran point guard is one of the most giving people he has ever been around.

“I have seen him rent out a movie theater for underprivileged kids to see the Black Panther,” said Webb, a former University of Louisville basketball player. “And I have personally seen his involvement and commitment with the W.E.B. DuBois Academy, Louisville’s only school of color for young men.

“He is more than an athlete. He’s a humanitarian.” 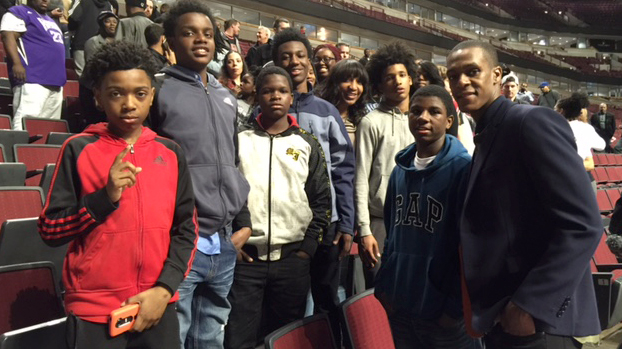 Even before his free-agent signing, Rajon Rondo was mentoring a group of boys in Chicago Read now

Rondo recently returned to Los Angeles. He said he has been lifting weights with his teammates via Zoom and doing basketball shooting workouts. He has also started teaching yoga classes.

“I’m teaching some online yoga classes to friends and family only,” he said. “I’m letting everyone critique me on what I can do to become a better instructor.”

Rondo is staying ready. And if the NBA season resumes, he believes the Lakers have the right mixture of talent, leadership and coaching to “get to the promised land.”

“We have a heck of a team and a great opportunity. And you can feel the magnitude of guys wanting to get out there, play and finish what we started. We’re still open in thinking we still do have that opportunity. We are still training like we are coming back to make a run for it.”