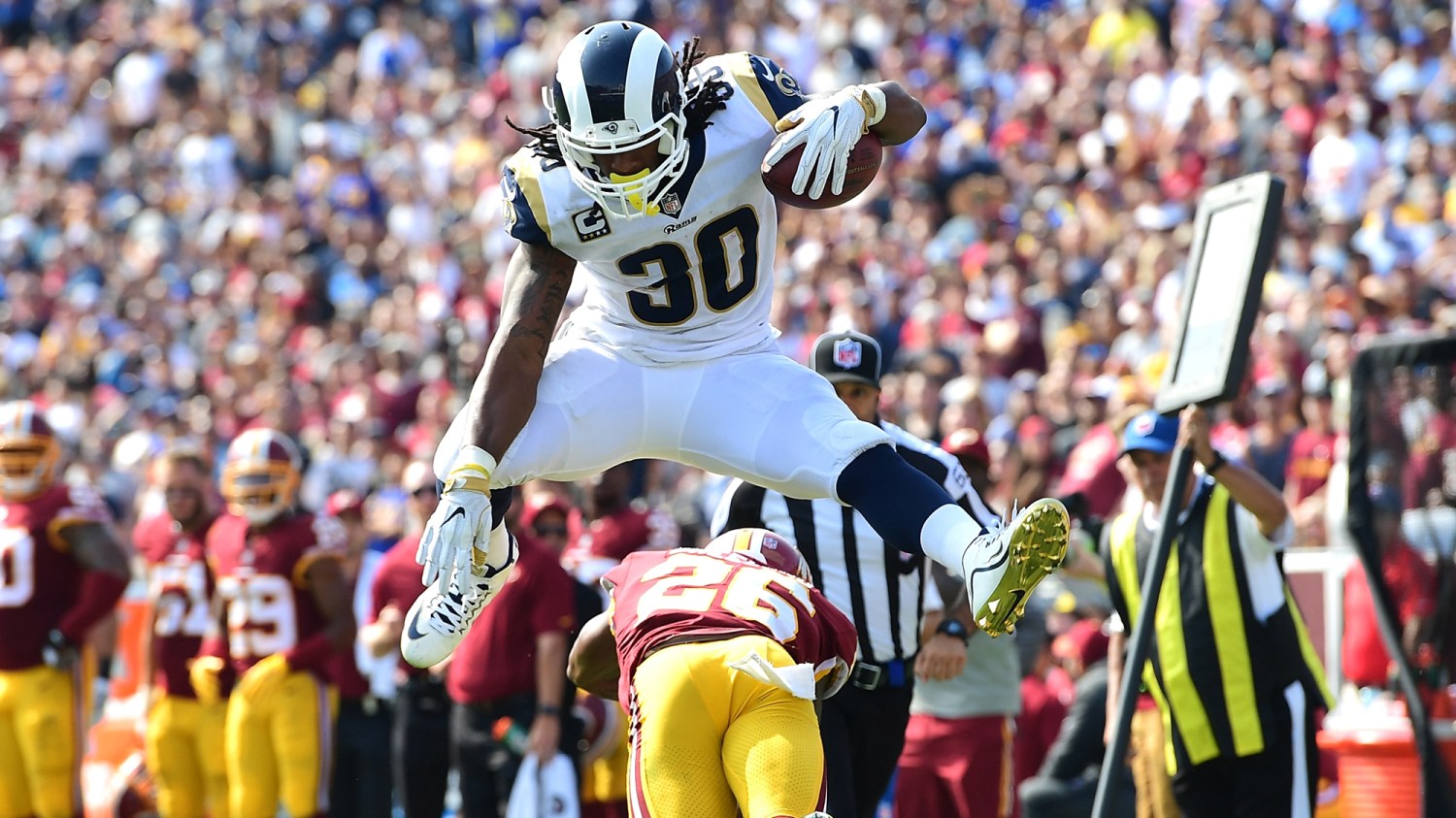 Running back showed his talents in game, including a highlight-reel-ready touchdown

LOS ANGELES — We’ve been waiting for Todd Gurley to remind us what he can do. He hasn’t really been Todd Gurley since the 2015 season, which in NFL years might as well be a generation ago. But finally, on a sun-splashed Sunday afternoon, Gurley again displayed those oh-wow skills that once got the league talking.

Great vision, power, balance and elusiveness — Gurley showed it all. The third-year running back was so good, in fact, that he powered a Los Angeles Rams comeback from an early double-digit deficit. And although the Washington Redskins still managed to leave the West Coast with a 27-20 victory, the Rams and their fans should be very encouraged about Gurley’s big show.

The most important player in the Rams’ offense — at this point, Gurley even gets top billing over second-year quarterback Jared Goff — performed up to his status at the Los Angeles Memorial Coliseum.

Gurley led all rushers with 88 yards and scored a touchdown. It was his highest yardage total since he broke loose for 140 in Week 14 of 2015. Even more encouraging for Rams fans, Gurley had a 5.5-yard average on 16 rushes. In 16 games last season, Gurley never averaged more than 4.1 yards per carry, and in six games he failed to reach the 3.0-yard mark.

In the passing game, Gurley had one of those moments that television producers love to include in highlight packages.

On an 18-yard touchdown reception from Goff, Gurley leaped over a defender on his way to the end zone. The catch was among his three receptions for 48 yards. The total from scrimmage: 136 yards and two touchdowns. Albeit not exactly a record-setting day.

The Rams’ offense, though, is learning how to walk under rookie head coach Sean McVay. Getting Gurley going was a big step in the right direction.

“Todd made a handful of plays today,” McVay said. “It was good to see him be able to do that.”

Especially after what happened in Week 1.

The Rams got off to a smashing start in McVay’s debut, dismantling the Indianapolis Colts, 46-9, at the Coliseum. Only one problem: Gurley rushed for 40 yards on 19 carries (a 2.1-yard average). That was the same old stuff that Rams fans saw last season after the franchise’s return to L.A.

Ownership gave former head coach Jeff Fisher the boot and replaced him with McVay, formerly the Redskins’ offensive playcaller, who’s being counted on to help Goff develop and help Gurley regain the form that enabled him to be named the 2015 Associated Press Offensive Rookie of the Year.

How good was Gurley as a rookie? The 10th overall pick in the 2015 draft, Gurley rushed for 1,106 yards (with a 4.8-yard average) and 10 touchdowns. He became the first rookie in NFL history with at least 125 yards rushing in four consecutive games.

In Rams history, only three rookie runners have gained at least 1,000 yards: Eric Dickerson, Jerome Bettis and Gurley. Dickerson and Bettis are in the Pro Football Hall of Fame.

Last season, the Rams were a hot mess, finishing 4-12 and dropping 10 of their last 11 games. Gurley rushed for only 885 yards and had a disappointing 3.2-yard average. McVay brought to Los Angeles the stretch-zone running scheme that he learned from Mike and Kyle Shanahan in Washington, and Gurley on Sunday “got some plays out on the perimeter where [they were called as] some tight inside zone-type plays. He bounced it out and was able to create.”

In the running game, the offensive line also seemed much more up to the task against Washington than it was against Indianapolis. The group actually opened some holes for Gurley.

“Coming off of last week, not exactly what we wanted in the run game,” Goff said. “You open up a little space for him, he’ll make it work.”

Using Gurley in the passing game has been a point of emphasis for McVay. Apparently, the Redskins weren’t concerned about Gurley hurting them in that area, as “they weren’t really respecting me … they weren’t really guarding me at all on the checkdowns. I was just telling Goff to be alert. He was able to hit me on a couple of them.”

On first-and-10 from Washington’s 18-yard line midway through the third, Goff came off his primary and secondary reads and found Gurley lightly jogging out of the backfield uncovered near the left sideline. At about the 10-yard line, defensive back Bashaud Breeland made Gurley’s highlight tape, going low for the tackle as Gurley hurdled him before diving at the pylon for the touchdown.

Goff had the best vantage point.

“He was tremendous,” Goff said. “He kept jumping over people and making plays.”

McVay enjoyed the Goff-Gurley scoring connection, as well as what he saw develop between them on passing plays.

He didn’t make enough. After trailing 13-0, the Rams tied the score at 20-all midway through the fourth quarter. In the game’s final two minutes, Washington quarterback Kirk Cousins threw a go-ahead 11-yard touchdown pass to Ryan Grant.

With 1:44 on the game clock, Los Angeles got the ball back on its 28-yard line. On the Rams’ first play of the possession, Goff was intercepted. Game over.

Still, Gurley found something positive on which to focus.

Perhaps for Gurley too. And for the Rams, that would be great, long-awaited news.