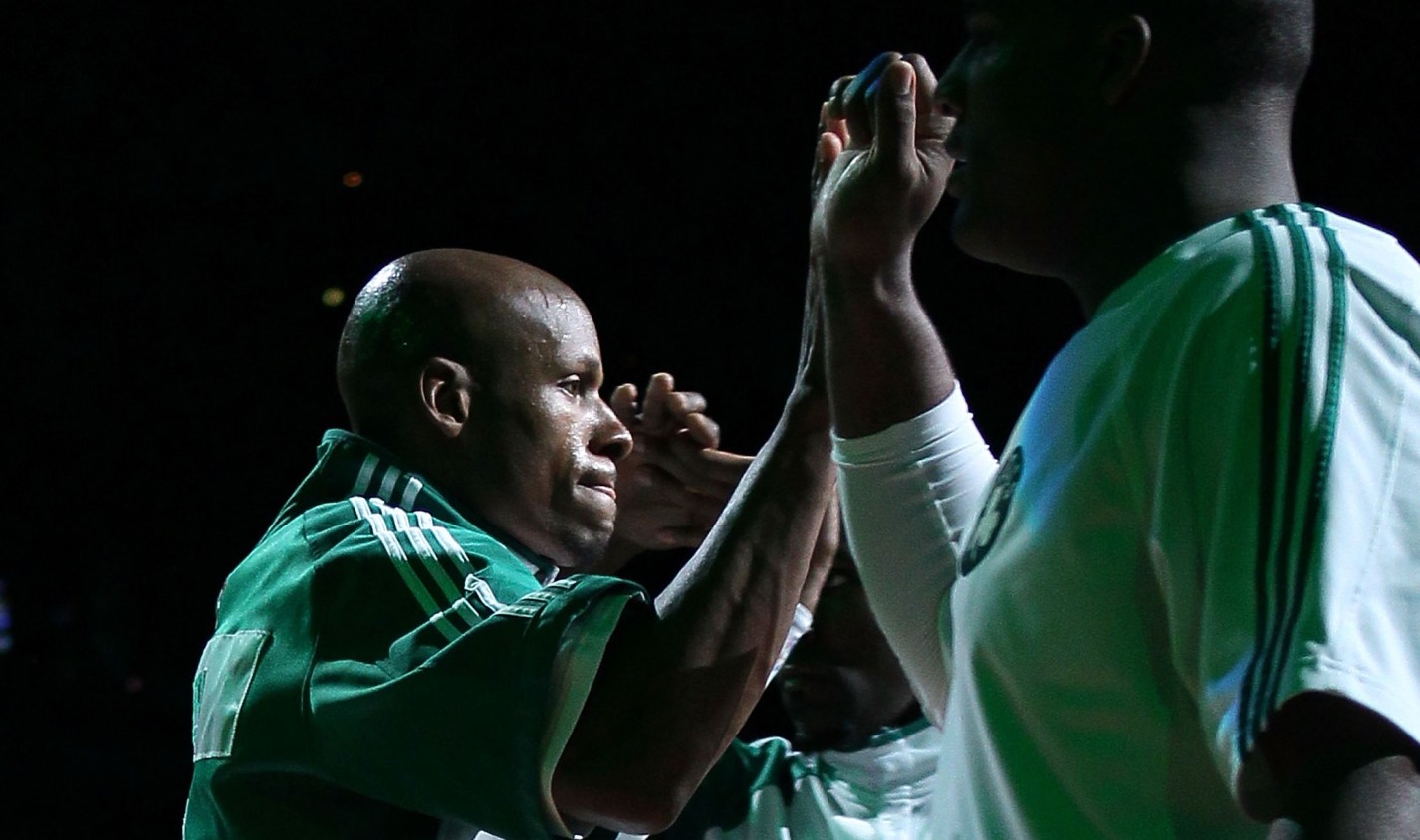 Ray Allen #20 of the Boston Celtics runs on the court during player introductions against the Orlando Magic at TD Banknorth Garden in Game Three of the Eastern Conference Finals during the 2010 NBA Playoffs on May 22, 2010 in Boston, Massachusetts. Elsa/Getty Images
NBA

Paul Pierce, Doc Rivers and others reflect on the vet’s colorful career and personality

Farewell to Ray Allen, the most interesting man in the NBA. The league veteran announced his retirement on Tuesday in an open “letter to my younger self” on The Players’ Tribune. But he will surely be remembered for way more than what he did on the court.

“I would consider Ray ‘The Barack Obama of the NBA,’ ” Los Angeles Clippers forward Paul Pierce told The Undefeated about his former Boston Celtics teammate. “He spoke really well. Not that he is not intelligent, but he would come off really well. He can convince you pretty much about anything.”

It’s no secret that Allen was the greatest shooter in NBA history until Golden State Warriors point guard Stephen Curry got hot. The NBA’s all-time leader in 3-pointers made won two NBA championships, was a 10-time All-Star and averaged 18.9 points a game in 18 seasons. While his Celtics days were the most memorable, his biggest moment was his clutch 3-pointer with 5.2 seconds left in Game 6 of the 2013 NBA Finals that allowed the Miami Heat to survive and eventually knock of the San Antonio Spurs to become champs.

Ken Griffey Jr. had the prettiest swing baseball has ever seen. The prettiest jumper basketball has ever seen was from Allen: textbook holding of the ball and quick release, a use of his athleticism to get high off the floor and very little space given up behind the 3-point line. Allen expected every 3-pointer to go in, and on occasion, he’d celebrate with a cool fist pump or sideways peace sign.

“A pro’s pro,” former Celtics coach Doc Rivers, now president and coach of the Clippers, said of Allen. “People have no idea how hard he worked on his craft. I never had to worry if Ray was ready or not. I always appreciated that.”

No question, Allen is a future first-ballot member of the Naismith Memorial Basketball Hall of Fame in Springfield, Massachusetts.

Allen flirted with coming back to the NBA with several teams, but actually hasn’t played a game since the end of the 2013-14 season with the Heat. If the 41-year-old’s announced retirement date of Nov. 1, 2016, is viewed as the official date by the Hall of Fame, Allen could go in with Kobe Bryant, Tim Duncan and Kevin Garnett in 2021. As interesting as the Michael Jordan-led class of 2009 and the Shaquille O’Neal, Yao Ming and Allen Iverson class of 2016 were, 2021 could go down as best ever in Springfield.

“I didn’t think [Allen] was coming back. When you haven’t played for a year, it’s tough, especially with these young kids coming in faster, more athletic. He was still able to shoot the ball and be a presence, but it’s still a tough grind.”

During Allen’s Boston years, the Celtics and NBA were warned not to speak to an extremely focused Garnett before games. Pierce might make a quick pregame cameo in the locker room, but typically was in the training room. So whom did the media go to before games? Allen. You could always find him sitting in front of his locker with flip-flops on, his legs crossed and reading a book after already finishing his pregame shooting three hours before the game and before other players arrived.

The former University of Connecticut star told my Boston Globe colleague that he first fell in love with books after he proudly won three in the first grade in Oklahoma. He fell more in love with reading to help him pass idle time when he entered the NBA in 1996 as a member of the Milwaukee Bucks, and became a voracious reader after reading Paul Coelho’s book, The Alchemist.

Allen had a library with about 500 books four years ago. He had different sections that included a set of encyclopedias and books on African-American legends and the military. Allen shared the book, Sniper, with then-Celtics teammate Keyon Dooling and gave his teammates books such as, Who Moved My Cheese? and Well Done as gifts.

“I’ve always been a reader,” Allen once told The Boston Globe. “Once I got to the NBA, I picked it up again because I had so many lonely nights where I was on a plane, we lost, my mind just kind of was blank. So I started reading books more then, started reading things, going to different places in my mind.”

“If he saw you reading a book, it was guaranteed the next day he would have it,” Rivers said. “He was a seeker of information.”

Pierce and Garnett would always do a postgame news conference at home games about 20 minutes after the game in a news conference room. They typically lasted four to six minutes, making it easy for both players to get their media requirements done quickly. While both were great quotes, the short availability often frustrated the Boston-area media.

As for Allen, he would always talk to the media after the game outside his locker and would patiently await their arrival if he got dressed fast. He was very meticulous about not doing any on-camera interviews until his expensive and beautiful suit, shirt, tie, socks and shoes were on perfectly, and he has admitted to being borderline obsessive-compulsive. But he usually answered every question until there were no more.

“He was very disciplined in everything,” one former Celtics employee told The Undefeated. “It probably came from his background of being son of the military.”

Allen could answer a question on the record about anything with an intelligent, well-thought-out response every time. One time, this reporter tried to stump him by asking about a terrorist attack where grenades and rifles were used on the Oberoi Trident Hotel in Mumbai, India, in December 2008. Not only did Allen know about it, but he had a personal connection to it. One of his longtime friends, Daryl Jones, was a flight attendant staying at the hotel.

“When I called him, I was telling him everything I heard on TV,” Allen told The Boston Globe back then. “[Jones learned] about the hotel being on fire and I told him that there were police outside. I told him, ‘This is what is happening. From what they are saying, there are still terrorists running around shooting people and throwing grenades. You need to hide and don’t open the door if someone knocks on it.’ We talked for about 20 minutes and I told him, ‘We’ll be [by the phone] if you need to call back. If you call back, we’ll be up waiting, and if you [don’t call], just leave us a message letting us know you’re all right.’ ”

Allen loved engaging in deep conversations with the media, teammates or anyone who cared to challenge his mind about life, politics, sports, anything. His teammates loved when they felt like they knew something Allen didn’t. Allen also loved to learn something new.

While Allen appeared to be cool with most of his Celtics teammates, he rarely engaged in any foolishness in the locker room when the media was there or on the team flights, sources said. He was often a loner who kept to himself. Once he completed his weight lifting, shooting and treatment, he typically left the Celtics’ training facility while others hung around, a source said.

Allen was always in amazing shape as if he was training for the Boston Marathon, which his mother, Flo Allen-Hopson, ran several times. One Celtics employee said Allen often ate chicken and salads. He rarely ate so-called bad foods and didn’t drink alcohol.

“He definitely was an influence on me in that aspect,” Pierce said. “I changed the way I was eating and my diet. He influenced a lot of the young guys. He didn’t drink. He ate well. He was the cleanest NBA player you can come up with.”

Allen was also considered extremely gracious and generous to ball boys, too. He once gave a Celtics employee $1,000 for helping him during his shooting workouts, a source said. Celtics president Danny Ainge said that Allen “defined the word professionalism” in a statement.

Unfortunately for Allen and the Celtics, his bold departure to Miami still stings Pierce, Rondo and Garnett.

Allen turned down a two-year, $12 million contract offer from the Celtics so he could sign with the Heat in July 2012. Pierce said that he was blindsided by Allen’s decision and the news stung primarily because he was leaving to join an Eastern Conference rival. LeBron James and the Heat actually eliminated Allen and the Celtics in Game 7 of the 2012 Eastern Conference finals.

“That was a tough situation because we thought it was betrayal,” Pierce said. “That’s why the whole thing evolved like it did with us not talking to him. Ray didn’t really have the best relationship with Rondo anyway. That was nothing. [Rondo], me and Kevin, he didn’t have any talk with us [before his Miami decision].

“I tried to call him and I didn’t get any return calls before he signed with Miami. That was our rival. We were brothers. We came in together. We just wanted a heads-up or a ‘what’s on your mind?’ or something like. Then, all of a sudden, he left. That was the biggest disappointment on my end. Not even getting a callback at that moment.”

Pierce said he eventually talked to Allen after sending a congratulatory text after Allen won his second NBA championship with Miami. He said he follows Allen on Instagram and their wives still speak regularly.

Garnett, who recently retired, declined comment earlier this year when asked about Allen. Rondo, now with the Chicago Bulls, told the Chicago media that he thought Allen retired two years ago when asked about his retirement. Pierce hopes that he, Rondo and Garnett can all get on the same page with Allen in the future. The Celtics put out a release congratulating Allen on his retirement.

Outside of his challenging relationship with his former teammates, NBA fans might have forgotten that he once had a fierce rivalry with Bryant. What won’t be forgotten, however, is his 2008 NBA title with “The Big Three” in Boston.

“We are all going to be linked together, no matter what. And now that he’s retired, he’s going to be with Kevin in the same Hall of Fame class,” said Pierce, who plans to retire after this season.

Allen, the person, is quite memorable, too. NBA greats come and go, but a book-reading, internationally versed, healthy-eating military kid who left Boston without notice, and announced his retirement two years after he stopped playing?

Yes, Walter Ray Allen Jr. will be remembered for much more than his gorgeous jumper.

“All great basketball players have something that is different about them, kind of off about them,” Pierce said. “A lot of people look at Ray like, ‘Jesus Shuttlesworth,’ that kid from the movie … He wasn’t like your typical athlete.”