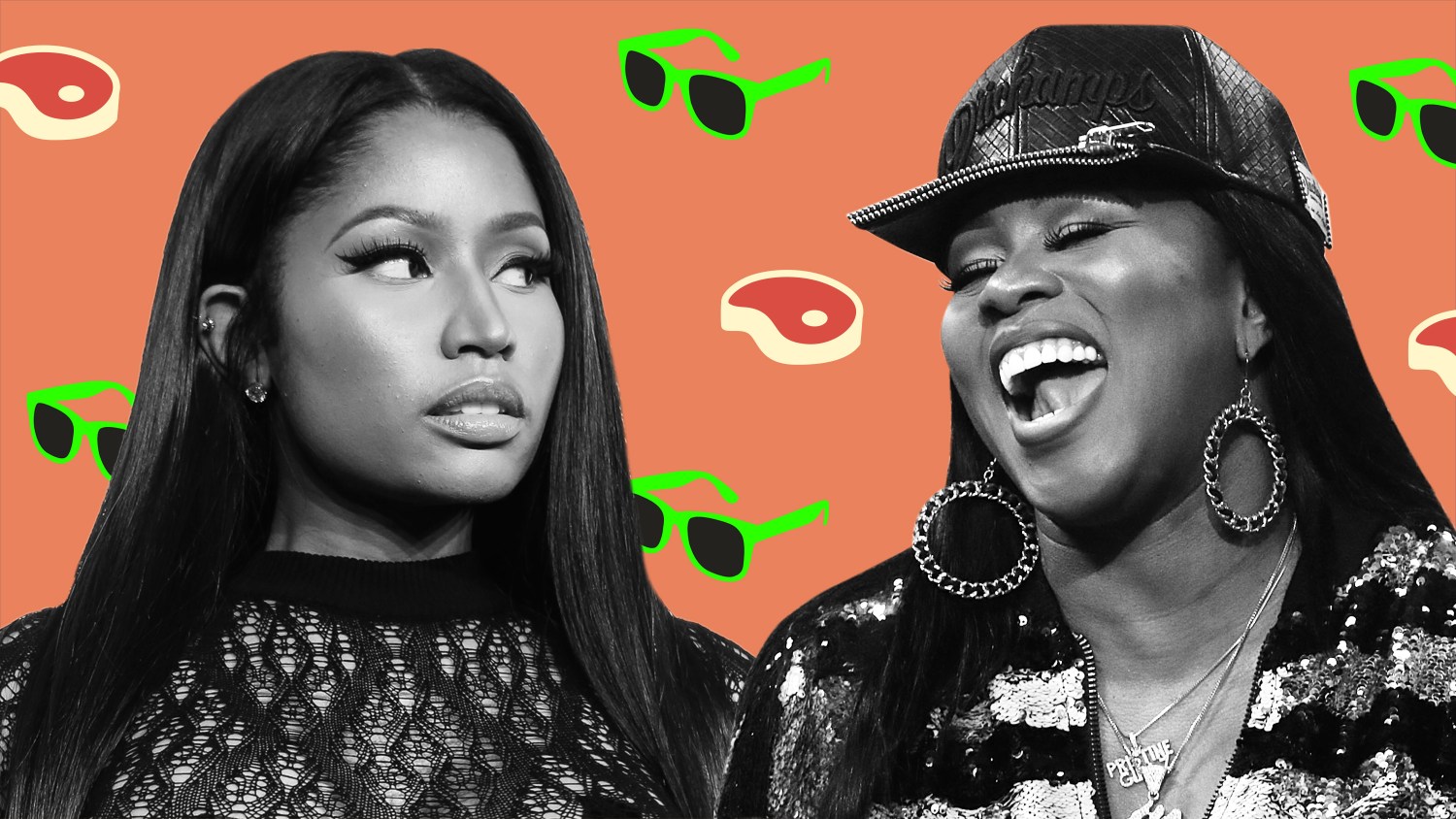 It’s one of Mike Tyson’s most famous quotes: Everybody has a plan until they get punched in the mouth.

Not in many arenas is this more true than in the world of hip-hop, and in particular rap’s newest war of words between global superstar and multiplatinum Grammy Award nominee Nicki Minaj and the less famous but respected Remy Ma, who in the year after her release from prison on a shooting conviction scored a platinum and Grammy-nominated hit with Fat Joe’s “All The Way Up.” The rivalry has been brewing for a decade and has increased in intensity in recent months. Over the weekend, Remy’s “shETHER,” an interpolation of Nas’ iconic 2001 diss track to Jay Z, “Ether,” was released.

Beats, bars and battles was the theme of the weekend of Feb. 24. On Feb. 24, during the day, Future released his second No. 1 album in as many weeks with the overly melodic HNDRXX. The feat made him the first artist in history with back-to-back No. 1 debuts in successive weeks, per Billboard. On that night, legendary producers Swizz Beatz and Just Blaze held a three-hour beat battle on Instagram Live, which captured the attention of hip-hop fans around the world, as well as celebrities and influencers. The battle of catalogs, which they announced the day before, featured the high-energy Swizz and soulful Just — they both ran through classic records from Jay Z, DMX, T.I., Cam’ron and more. It was exciting. Busta Rhymes was left in a complete stupor.

Debate swirled around who “won” — but the moment was created by the culture, and for the culture, as the aforementioned T.I., as well as Meek Mill, DJ Khaled and, yes, even Khaled’s infant son Asahd commented along with more than 11,000 fans who tuned in.

There’s a chance Remy Ma was inspired by the Swizz and Blaze vibe. But Nicki Minaj has been sending veiled shots toward Remy for a while. From Jason Derulo’s recent “Swalla”: I gave these b—— two years / Now your time’s up / Bless her heart, she’s throwing shots, but every line sucks.

And there’s Gucci Mane’s recent “Make Love” — I’m the iPhone / You the Nokia / Everybody know you jealous / B—- it’s so clear … Oooohhh, you the qu-e-e-e the queen of this here? One platinum plaque / B—- where? … You see, silly rabbit, to be the Queen of Rap / You gotta sell records / You gotta get plaques.

“But you point fingers at me? I’m the bad girl / When she the one out here misleading black girls.”

“shETHER,” immediately dubbed a “manifesto of shade,” arrived Feb. 25 for free via SoundCloud — and social media shifted toward the two artists with the expected assault of memes.

To “Ether” someone, in the 16 years since Nas’ song, means effectively to put someone on jump street. To call them out. A more intense verse of the dozens, it means to attempt to verbally end someone’s career. Did Nas’ song end Jay Z? After four years of feuding, they made up. But the cut has since become a top five battle record of all time. Did Drake, with the 2015 “Back to Back,” end Meek Mill’s career? Meek is still releasing music, but it’s impossible to listen to him without thinking of the verbal whupping he signed up for by accusing Drake of not writing his own rhymes. Thus, will Remy end Nicki’s? Nope, but that’s beyond the point. Here … some context.

Nicki could ignore all of this, banking on the belief that in a 24/7 news cycle the attempted assassination of her character will be old news by next weekend. But the stain will always be there.

Yes, Remy Ma did just release Plata O Plomo, an album with longtime Terror Squad creative partner Fat Joe. And, yes, the album didn’t post the numbers many probably expected, especially as the lead single — the raucous French Montana-featured “All The Way Up” — was one of the biggest records of 2016, spawned an unexpected remix featuring Jay Z and was nominated for a Grammy. While Remy Ma is not as famous as Nicki Minaj, she has stats to her name, and more importantly, in this case, bars on bars on bars.

The writing has been on the wall

“Anybody can get it. That’s how I be on it,” Remy Ma said recently in The FADER. “If you listen to my old mixtapes, if I ever had a problem with any female, or anything ever in life, I will say your name. But I’m not just gonna go and come at somebody just to do it.” As noted, Nicki and Remy have been trading perceived shots at each other in the months leading up to “shETHER.” Most notably: Remy’s feature on Phresher’s 2016 “Wait A Minute,” which did everything sans give out Nicki’s Social Security number: Will I smoke this b—–? Yes / Probably fail my piss test / Get rid of those fake breasts / And put a vest on this b—- chest. Then the kicker, That ghostwriter ’bout to call her / That lifeline getting shorter/ R.I.P. Biggie Smalls / Why the f— they ain’t warn her?

“Everybody always tries to pit women against each other,” Remy Ma said in the interview (in which she also spoke at length about her life and the lives of incarcerated women). “They make it seem like there can only be one female at a time. But I feel like we’re so different. We aren’t even in the same lane at all, period. We are on total different ends of the spectrum. But whatever.” Of course, there should always be “room” for more than one female MC — especially given the range of talented women in rap represent. That being said, Remy Ma isn’t one for the games.

Where “shETHER” ranks all time

Give Remy credit. She called out names and sweet baby Jesus did she come with a Timberland shoe box and Yankee fitted cap full of receipts. **Cranes neck at Hot 97 radio host/executive Ebro Darden** That’s what’s so fascinating. Most diss records — albeit entertaining ones such as Drake’s “Back To Back” or T.I.’s “What Up, What’s Haapnin’ ” — never actually named names, though the intended targets were never in question. So, it’s great to see Remy Ma leave speculation and subliminals at the door. Some of rap’s most storied diss records have (think 1996’s “Hit ‘Em Up” from Tupac Shakur, and 1991’s “No Vaseline” from Ice Cube). Point being, one can make an effective battle record without naming names, but the ones that stand the test of time — always have. And always will. Remy Ma followed that blueprint.

Is Nicki built for this? And what’s next for Remy?

This is the first time Nicki’s been verbally challenged to this extent. She’s had no competition from a mainstream perspective since she became a household name when her debut, Pink Friday, dropped in 2010. Angel Haze and Azealia Banks are just two rappers who have spoken ill of Nicki over the years — and the directed shots have largely fallen on deaf ears.

“shETHER” is different. Totally different. Nicki clowned Remy’s subpar album sales to defend her place in rap, but as a friend of mine recently noted, “Burger King sells a lot of hamburgers. Doesn’t mean they have the best burgers.” In battles, bank accounts never mattered. Nicki could ignore all of this, relying on the belief that in a 24/7 news cycle the attempted assassination of her character will be old news by next weekend. And she’d be right. But the stain will always be there. It’s a stain money can’t erase.

But what about Remy Ma? You never want to run the risk of coming off too pressed, or too eager. Ride the wave as long as it takes you, and then move on. Move on to the forthcoming solo album — which is slated to be an emotional recount of her emotionally taxing experience in prison. The worst thing Remy Ma can do in this situation is beat a dead horse.

Nicki can come back

The only rule about rap beefs is there are no rules. It’s why I didn’t get up in arms about Drake’s lyrics directed at Kid Cudi on last year’s “Two Birds, One Stone” (that and, you know, Cudi actually threw the first shot.) But in “shETHER,” Remy accused Nicki of sleeping with some big names in the music industry, leading to a back-and-forth on Twitter between Nicki and R&B singer Trey Songz. Remy accused Nicki of faulty butt injections and labeled her the poster child of women who are insecure about their bodies — But you point fingers at me? I’m the bad girl / When she the one out here misleading black girls / All these fake a—-s influenced by that girl / Dyin’ from botched surgeries — what a sad world! Remy even mentions Nicki’s brother, who is accused of some incredibly grotesque crimes.

Remy cut deep. Real deep. Even in rap where the most sacred of rules say all’s fair in love and hip-hop — Ja Rule once predicted Eminem’s daughter would grow up to become a slut — if anything is crossing the line, that sounds like it would be it. But if you’re calling yourself “the female Jay” — as Nicki did on last year’s “Pinkprint Freestyle” — people expect mics to drop. Nicki’s response, if there ever is one, would have to be in the realm of her appearance on Kanye’s 2010 posse cut “Monster” — the most talked about and respected lyrics of her career. Plus, Nicki’s the bigger star, meaning whatever she says will automatically receive a larger platform. Her next move has got to be her move, and a big move.

Let’s not overanalyze Remy vs. Nicki

But what’s the ultimate end result? It’s hard to imagine this dragging out much further than it already has. We might hear a response from Nicki. Or we might hear more veiled shots on a feature or album cut in the future. Given the allegations Remy laid on wax, it’s even harder to imagine the two ever doing a record together. Then again, Jay Z punched back at Nas after “Ether” admitting he “left condoms on the baby seat.” Fast-forward a decade and a half later and Jay Z and Nas are friends (or at least very cordial). Neither enjoys talking about their war of words. Crazier things have happened in rap.

Keep it a buck. This is a lot more fun to talk and write about than Soulja Boy vs. Chris Brown.