Many happy — and sometimes unhappy — returns of NBA stars

The Oklahoma City Thunder hosted one of the NBA’s oddest and most emotional return games ever when Kevin Durant played in Oklahoma City for the first time as a Golden State Warrior last season. Thunder fans certainly didn’t make their former NBA MVP feel welcome, as they chanted, “Cupcake” and other nasty things during the game. But Durant and the Warriors got the last laugh with the blowout road victory.

The now-struggling Thunder will see what the other side of that scenario feels like twice this week. Thunder forward Paul George returned to Indianapolis on Wednesday to play the Indiana Pacers for the first time since receiving a desired trade in the summer.

George scored 12 points on 3-of-14 shooting in the Thunder’s 100-95 win against his former team. He was booed during introductions and throughout the game.

Thunder newbie Carmelo Anthony returns to play the New York Knicks for the first time on Saturday since his roller-coaster time in the Big Apple ended with a desired trade, even after team president Phil Jackson was fired.

The NBA has had its share of odd and emotional games featuring the return of a former star that ended up being memorable or nightmarish for the player in the spotlight. This has been more common since 2000, as NBA superstars didn’t change teams in their prime as much before then. Here are my top eight memorable NBA return games.

Shaquille O’Neal and Kobe Bryant won three NBA championships together with the Los Angeles Lakers but could not see eye to eye. So the Lakers traded O’Neal in the summer of 2004 to the Miami Heat, opting to move forward with the younger Bryant as their star. O’Neal didn’t want to be traded from the Lakers, and a cold feud erupted with Bryant afterward. Lakers fans gave O’Neal a standing ovation with a smattering of boos when he was introduced on Christmas Day. Bryant showed respect by standing up and clapping, but it was all business during the game. One of O’Neal’s friends actually wore a T-shirt showing an old photo of O’Neal and Bryant together after winning an NBA title with a rat’s head superimposed over Bryant’s face. Bryant finished with a game-high 42 points, but O’Neal had 24 points, 11 rebounds, 3 blocks and an overtime win for his Heat.

Thunder fans are still boiling over Durant’s move on July 4, 2016, to sign as a free agent with the rival Warriors. There were many read-between-the-lines words and actions from Thunder All-Star guard Russell Westbrook to show his disdain for Durant’s decision to join the team that eliminated them in the 2016 Western Conference finals. Fans brought snakes to Durant’s return game, one even dressed up in a cupcake costume and there were many, many signs degrading Durant. He was booed strongly during pregame introductions and every time he held the ball. The Thunder also decided to skip the video tribute for its former star, who led the franchise to the NBA Finals in 2011 and was the 2014 NBA MVP. Durant silenced the crowd with 34 points and nine rebounds in a 130-114 victory. After winning the 2017 NBA championship with the Warriors, the Finals MVP had hats made depicting a cupcake with a championship ring.

In perhaps the most highly anticipated return game in NBA history, LeBron James returned to Cleveland to play the Cavaliers after announcing on national television that he would be taking his talents to the Miami Heat in July 2010. Emotional fans burned the Ohio native’s jersey as he joined forces with fellow NBA All-Stars Dwyane Wade and Chris Bosh in Miami to form a superteam. James was, of course, booed during pregame introductions, but the Heat took the crowd out of the game quickly by jumping far ahead and running up a 30-point lead midway through the third quarter. Fans halfheartedly chanted, “Akron Hate You” during the game, and James was booed every time he touched the ball. Things got ugly during the fourth quarter. A Cavs fan was ejected for taunting a fan wearing a James jersey, police ejected fans for throwing objects onto the floor and a fan tried to throw a towel at James as he sat on the bench. James scored 38 points during a 118-90 rout of the Cavs and also declined a chance to apologize for his departure to fans in a postgame interview with Turner Sports’ Craig Sager.

Michael Jordan led the Chicago Bulls to six NBA championships before retiring in 1998. The retirement ended in 2001 when he returned as a player and part-owner of the Washington Wizards. While Jordan is known as the NBA’s most intimidating scorer, there wasn’t much scoring from anyone as the Wizards outlasted the Bulls 77-69. Jordan had much better nights in the United Center than this one, as he scored 16 points and tied a career high with nine turnovers in 41 minutes. What was most memorable was the Chicago crowd giving him a standing ovation for three minutes after he was introduced pregame. That tribute nearly brought the six-time NBA Finals MVP to tears. Jordan said afterward that it was tough for him to play because it felt like he was suiting up against a relative.

Ray Allen won an NBA championship with Paul Pierce, Kevin Garnett and Rajon Rondo with the Celtics in 2008 and lost in the 2010 Finals. After dealing regularly with trade rumors, Allen shocked the Celtics by taking less money to sign with rival Miami in 2012. Allen was booed strongly by Celtics fans during pregame introductions and throughout the game when he touched the ball. Garnett declined to give Allen a fist pound and said after the game that he’d lost Allen’s phone number. The Celtics, however, showed class by giving Allen a video tribute to a mixed reaction during one timeout. Allen had 21 points off the bench, but the Celtics won 100-98 in double overtime. With the 10-year NBA championship anniversary with his old Celtics teammates on the horizon, Allen has buried the hatchet recently with Pierce but still seems to be at odds with Garnett and Rondo. The Celtics have yet to reveal any 2008 championship celebration plans, and it’s uncertain whether Allen would attend.

Vince Carter made the Toronto Raptors a popular team to watch during his tenure with the franchise from 1998-2004 with his acrobatic dunks and scoring that garnered him the nickname “Vinsanity.” Several Canadian NBA players have also cited the 40-year-old for sparking their interest in basketball. Carter, however, was detested by Raptors fans after he was dealt to the New Jersey Nets in 2004. Fans believed Carter wanted to be dealt because he was disgruntled with the lack of big moves by the front office. In his first game back in Toronto on April 15, 2005, Carter was booed heavily by Raptors fans, who donned No. 15 baby bibs and T-shirts that read “FUVC” and “Wince” in reference to his injury woes. On Nov. 19, 2014, the Raptors brought Carter to tears with a long overdue video tribute during the first quarter of a home game against his then-team, the Memphis Grizzlies. Carter now plays for the Sacramento Kings and is viewed as a legend in Toronto. 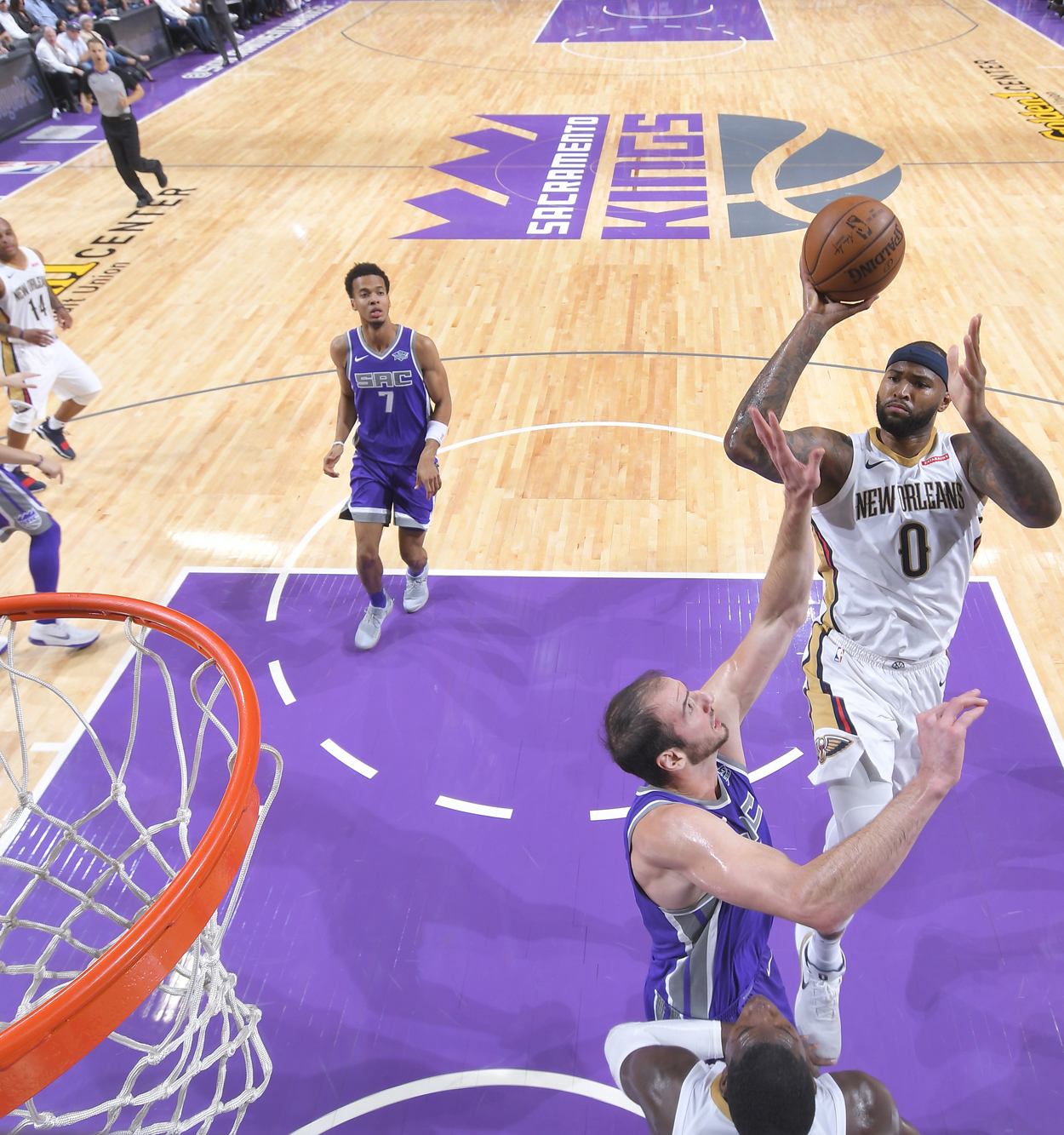 DeMarcus Cousins was a three-time NBA All-Star with the Kings, but he never took the franchise to the postseason and his emotions often had him at odds with a revolving door of coaches and teammates and the local media. Cousins said Kings general manager Vlade Divac promised to re-sign him to a five-year, $200 million contact before the 2017 NBA All-Star Game. But during the game in New Orleans, Cousins was traded to the New Orleans Pelicans and found out just before talking to the media postgame. Cousins was hurt personally and financially, and he teared up during a farewell dinner in Sacramento, California. Kings fans had mixed feelings about trading Cousins, who also did a tremendous amount of community work in Sacramento. Cousins was nearly brought to tears during a video tribute during a timeout, and he waved to the fans who gave him a standing ovation. With fellow All-Star teammate Anthony Davis sidelined, Cousins had 41 points, 23 rebounds and 6 assists in 44 minutes during a 114-106 victory.

Anthony played his first game in Denver since demanding a trade two years earlier that dramatically reshaped both franchises. Anthony is the Nuggets’ third all-time leading scorer and took the team to the postseason each season from 2003-10. Disappointed Nuggets fans, however, forgot all that as they booed him strongly every time he appeared on court. The Nuggets gave an odd video tribute during a timeout that saluted Anthony and other former Nuggets playing for New York: Chauncey Billups, Raymond Felton and Anthony Carter. Anthony left with a sore right knee early in the second half after scoring just nine points on 3-of-12 shooting. The Nuggets blew the game open with a 21-1 run midway through the second quarter to lead by 22 at halftime before winning easily, 117-94. Anthony returned to New York City to get his right knee drained the next day while the team went on to Portland, Oregon.