With ‘The Rich and The Ruthless,’ Victoria Rowell flips the soap opera script

Rowell’s Rules: When you’re at the wheel, you can cast the net wide and hire black

Drucilla Winters. A fictional character on CBS’s The Young and The Restless portrayed by one of daytime TV’s hottest black women on the tube, Victoria Rowell. Drucilla was spicy. She came in with a fiery personality that kept faithful viewers watching. So when Drucilla fell off a cliff on April 4, 2007, with no body to be found, fans were left waiting and wondering whether she would ever make her return to the daytime soap world.

Rowell has moved on and has created her own lane. Her new vision, a six-part scripted comedy series titled The Rich and The Ruthless, will premiere on the Urban Movie Channel on July 28.

“As you know, I’ve had more than 14 years of daytime drama experience beyond The Young and the Restless, but that is the most iconic role that I played in daytime, as Drucilla Winters,” Rowell said. “I very quickly saw the disparity for African-Americans not only in front but behind the camera and was very active in diversity in the genre of daytime drama television.”

Rowell, the creator and director of the dramedy, is also one of the show’s stars. She first launched a Kickstarter campaign for the pilot episode four years ago. Featured in UMC’s summer lineup, The Rich and The Ruthless is a fictional story of the first black-run daytime drama in the soap opera industry and is loosely based off her novels The Young and the Ruthless and Secrets of a Soap Opera Diva.

“The premise of the show is a black-owned soap opera that’s been on the air on a fictitious network in Hollywood for 20 years and the network is trying to get rid of them,” Rowell said. “This is a dramedy. It’s wonderful. It’s a behind-the-scenes from the black perspective looking out on the perspectives of fans, the perspective of the actors and the balancing act for a black actor or actress in Hollywood taking care of their family back in Mississippi.”

Rowell said she decided to choose Mississippi because of a relationship with Myrna Colley-Lee, the founder of SonEdna, a foundation that celebrates and promotes the literary arts and writers of all genres and backgrounds.

“I was introduced to her literacy organization many years ago and was invited to Mississippi,” Rowell said. “I had the great honor of collaborating. I was invited to the local high school, and I spoke and I was taken to the SonEdna art center. I’m also involved in literacy. The high incidence of illiteracy in the South and teen pregnancy, I absolutely wanted to make Mississippi a part of the story. Besides that, the historical civil rights aspects of Mississippi.

“To me, it all matters. It all collides. It all has to matter. In my opinion, to live a full, bountiful, abundant and give-back life, you have to know the history. You’ve got to look back to move forward.”

In The Rich and the Ruthless, all the drama begins when greedy studio executives inform self-made businessman and showrunner Augustus Barringer (Richard Brooks) that his show is getting booted off stage for another talk show after two decades on the air. Augustus is ready to fight back by any means necessary to stay on the air — even if that means filming out of his sleek Hollywood mansion or moving the company to Jamaica. Meanwhile, his unpredictable wife, Kitty Barringer (Rowell), is not happy about any of it. After recently returning home from her latest stint in rehab, she decides it’s time to claw her way back up the cliff and make her soap diva comeback to her role on the show as Blue Sylla, much to her husband’s chagrin.

“I won’t give it away, but it’s a family-owned business, so think Game of Thrones meets The Office meets Empire, sort of the political mores, dealing with the tug of war with the network, dealing with the family dynamics and power struggle,” Rowell said.

Rowell’s journey includes being raised in foster care as a child. But she overcame everything and became a successful model, dancer, actress, mother and activist. She is particularly passionate about fairness for black actors, so much so that she decided to take the lead as a creator and director so she could create positions and cast talented actors in nontraditional roles.

“I grew up in foster care for 18 years,” Rowell said. “I understand disparity. I understand racism. I understand all of that. I understand what poverty looks like. I do my job. No one works between two companies for 22 years not doing their job. I was able to learn and glean a lot from that experience, but at the same time, I thought, I have to do more than collect a check. I have to do my level best too … and if it means creating my own show, all the better. I don’t find it to be a hindrance at all. It has only empowered me and made me stronger. I manifested The Rich and the Ruthless so that I could be at the wheel and cast the net wide and have a black casting director and wardrobe, costume designer, and have black producers and be the executive producer, have black writers, cast the net wide for black catering, and so on.

“So you see, when you’re at the wheel, you can cast the net and hire black. We’re there. That’s a myth, that we don’t exist. Not only do we exist, but we have our union cards as well in some cases, many cases.” 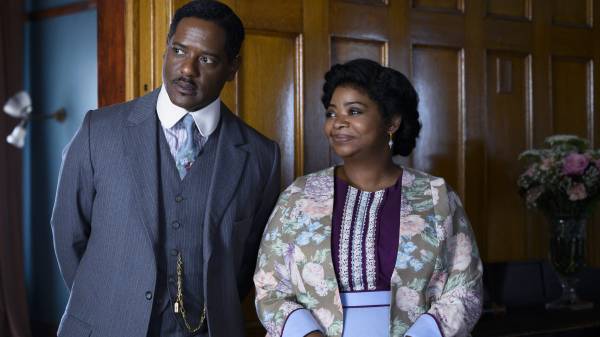 Netflix’s ‘Self Made’ suffers from self-inflicted wounds Read now

Rowell has earned three Daytime Emmy nominations and 12 NAACP Image Awards. She had an eight-season stint on Diagnosis Murder as a medical examiner and a handful of feature-film roles.

“Being Emmy-nominated is hugely a part of my story and my imprint as an actress,” Rowell said. “I’ve worked in Hollywood over 25 years with the likes of Sam Jackson to Eddie Murphy to Will Smith. I’ve worked with Mario Van Peebles. I’ve worked with Forest Whitaker, Dick Van Dyke, Jim Carrey, lots of incredible actors, black and white. Roc Dutton, Robert Townsend and, of course, Shemar Moore. Today, my highest achievement is being owner, creator, executive producer, director and co-writer and actor of … and in The Rich and the Ruthless.”

This Story Tagged: Get Lifted The Young and the Restless The Rich and The Ruthless Victoria Rowell