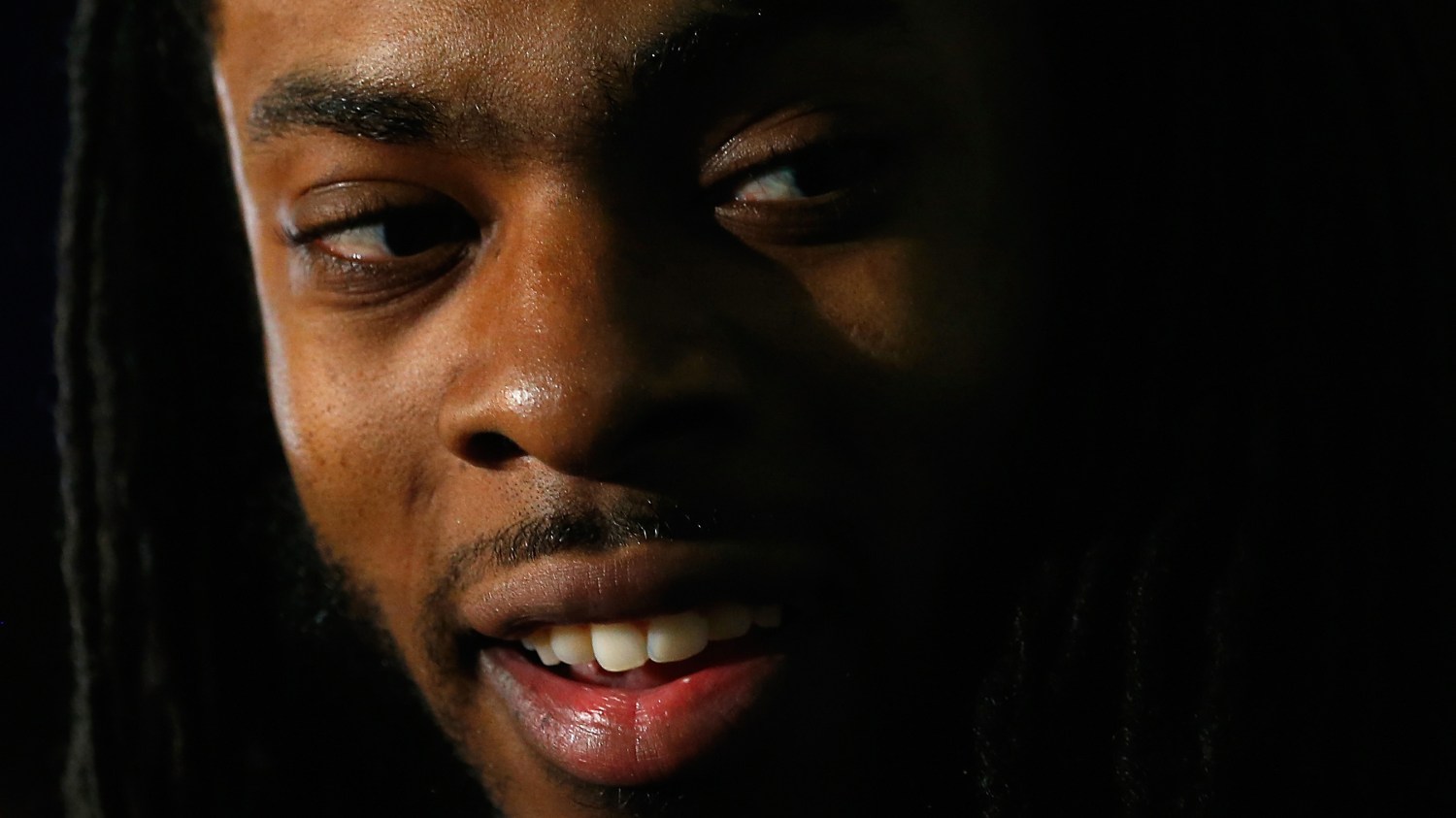 CHANDLER, AZ – JANUARY 28: Cornerback Richard Sherman #25 of the Seattle Seahawks speaks during a Super Bowl XLIX media availability at the Arizona Grand Hotel on January 28, 2015 in Chandler, Arizona. (Photo by Christian Petersen/Getty Images)
As Told To

I spoke to Seattle Seahawks cornerback Richard Sherman to discuss the issues of race and violence.

In the wake of these killings of black men at the hands of the police and the police being ambushed and killed, what are your thoughts?

Honestly, I think it’s unfortunate. You pray for the families on both sides. You don’t want to see anybody killed senselessly. It’s a tough time we are living in, a very scary time. It’s an uncertain future. It’s frustrating on both sides. Because you understand that police officers have a duty and a job. They sacrifice a lot to protect and serve. And I understand that some don’t do it the right way. I also understand that people shouldn’t get killed just because of the color of their skin. They have a right to a trial.

You’ve always been outspoken on social issues. Has anybody from your team or the league ever asked you to tone it down?

No. No one has ever spoken to me about quieting down. Our team has always been supportive of how I speak my mind. They only caution me on understanding the issues fully and not going off the cuff.

What Black Twitter is saying about Richard Sherman’s comments

Do you think the NFL should be more active when it comes to issues of violence and race that we have in our country?

I think the league should, but I don’t think they will because it doesn’t affect their bottom line. It doesn’t affect them, and a lot of the owners haven’t come from a background where they would have to deal with these type of circumstances. So it’s just news to them. They are too far away.

But as players, we are really close to it. A majority African-American league, with a lot of guys coming from impoverished environments, would really feel compelled to speak up.

What about the white and nonblack players? Do you think they should feel the same obligation as the black players?

I guess, in some respects, just as human beings.

We hear a lot about Black Lives Matter. But I think race was created. I think everybody is a human being first and then the color of their skin wouldn’t matter if nobody told you it mattered, if that makes any sense.

I don’t think it’s the white players’ obligation to speak up. I think it would be nice to show some unity within our league. But it truly hits home for a lot of the African-American players who are from these environments where people are getting killed.

What is your opinion of the Black Lives Matter movement?

It’s hard to formulate an opinion and generalize because they have several different messages. Some of them are peaceful and understandable and some of them are very radical and hard to support. Any time you see people who are saying, ‘Black Lives Matter,’ and then saying it’s time to kill police, then it is difficult to stand behind that logic. They are generalizing police just like they are asking police not to generalize us. It is very hypocritical. So, in that respect, I find it difficult to fully support that movement.

Those are innocent lives.

You were at The ESPYS when the four NBA players — Carmelo Anthony, Chris Paul, Dwyane Wade and LeBron James — stood up and called on professional athletes to do more. Who would you say are the four NFL athletes that could be the leaders for the NFL, including you?

I would choose guys from my team like Doug Baldwin and Michael Bennett. Because I know those guys would stand up for what they believe and not really care about the consequences or retribution that would follow.

I would add Tyrann Mathieu from Arizona. He has been outspoken about a lot of the senseless violence.

If the NBA stars called on you and the NFL guys to join them, would you?

If a coalition of athletes was to form, what should they do?

I think we target the inner city and the black community and a lot of the places that have high gang violence and beg for them to stop the senseless violence within our own community. Because once we stop that, once we unite as a people, once we come together and stop looking at each other as enemies, then we can move forward in a very powerful way. And combat issues in a different way than it has ever been done before. But until we do that, we are fighting on two fronts.

What do you say to people who say that violence in the black community is a result of institutional racism? Their communities are devoid of opportunity and that creates a circumstance that breeds crime and violence.

I’d say, to some degree, that’s true. There is low funding for education and very few jobs to go around. But there are also people who work hard to take care of their families. My parents did a great job, same inner city, Watts, South Central, [California]. They worked hard, didn’t make the most money, but took care of the kids in the neighborhood, took care of us, made ends meet, kept us out of gangs and all the nonsense. But I think there is also a mentality that we want to blame someone else for black fathers not being there for all these people having all these kids and nobody raising them. We want to say that’s systematic, but when do we stop saying it’s systematic and move forward and make a difference?

In the past, you’ve said that you were optimistic about the future of race relations in this country. Are you still optimistic?

Yeah! You have to be, because if you’re pessimistic, you don’t believe there’s a future, then why are we here? I believe that things will come together. This country has overcome worse things than this, like slavery. Obviously, this is a different time with different issues, but there were powerful people from every race coming together to do the right thing and I think that will happen again. There are good people in this country and that’ll shine through.