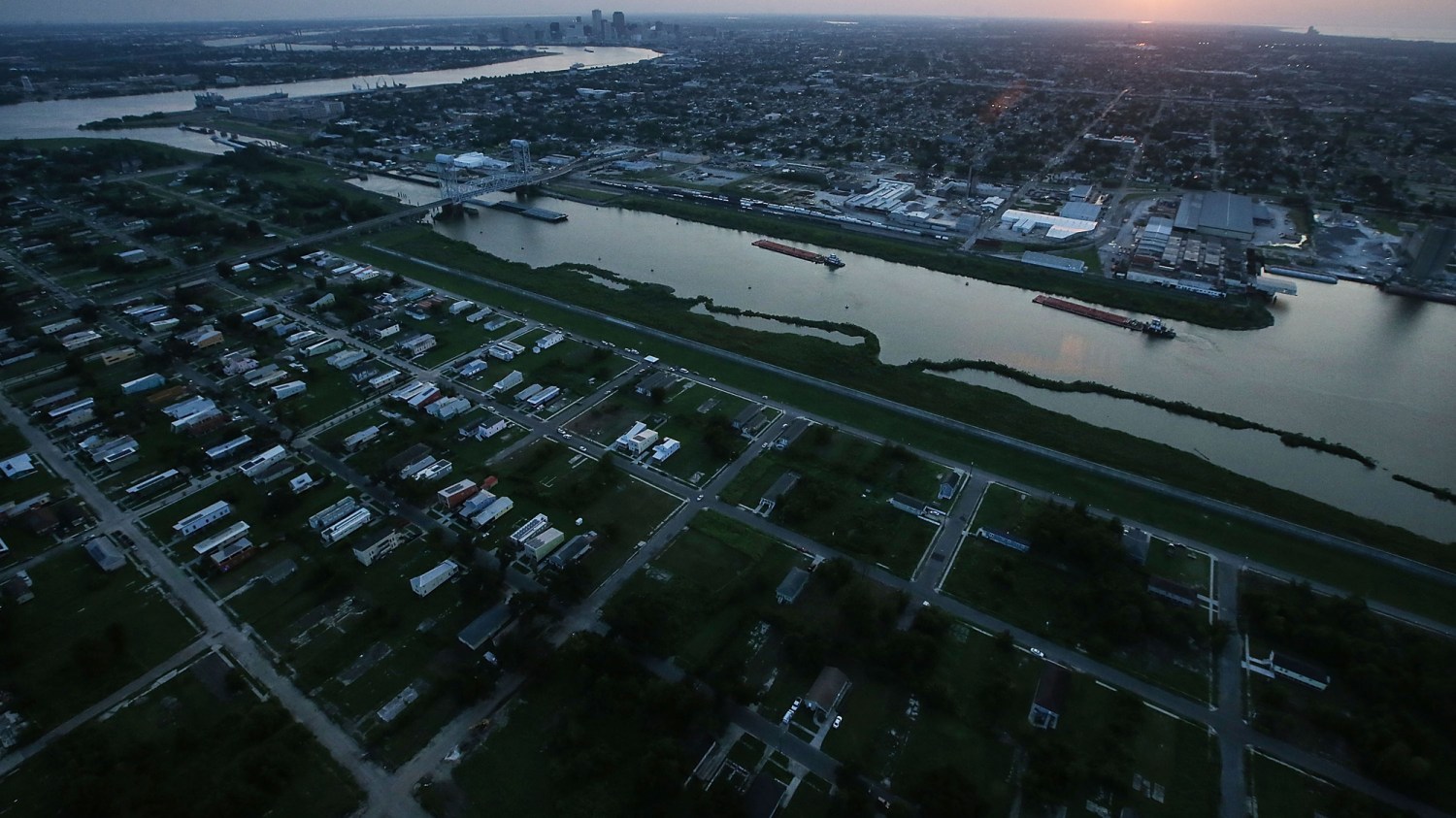 NEW ORLEANS, LA – AUGUST 24: Homes and vacant lots stand in the Lower Ninth Ward (bottom) in front of the Industrial Canal (C) and downtown New Orleans (Top, L) on August 24, 2015 in New Orleans, Louisiana. The area was one of the most heavily devastated areas of the city following a levee breach along the Industrial Canal during the aftermath of Hurricane Katrina. The tenth anniversary of Hurricane Katrina, which killed at least 1836 and is considered the costliest natural disaster in U.S. history, is August 29. (Photo by Mario Tama/Getty Images)
NBA

New Orleans police officer Abram Pedesclaux turned to the young black girl at the community event in the Lower 9th Ward and asked what scared her about police officers.

A joyous mood previously brought by kids enjoying physical fitness fun and dancing to the latest hip-hop spun by DJ RO came to an immediate halt. The children, adults sitting in the stands and community leaders in attendance at the Back to School Health And Wealth Expo went silent after hearing those dark words on the afternoon of Sept. 10. The girl’s answer also stung New Orleans Pelicans assistant coach Robert Pack, an ex-NBA player who co-hosted the event and is a native of the community.

“It broke my heart to hear that,” Pack told The Undefeated. “But this is what they see on TV, and it’s all they know. That is why it was important for the officer to be out there so that they could try to change the perception of police officers and what the community needs to do so they can protect and serve.

“It just reminds you of what is going on today. Not only do we need to get that rectified, but we need to change these young kids’ understanding of what police officers are there to do.”

Pack was born on Feb. 3, 1969, in New Orleans and grew up in a home at 2336 Alabo St. in the Lower 9th Ward. The term “Lower” is in reference to the location of this voting district ward near the mouth of the Mississippi River below the rest of “The Big Easy.” The area received worldwide attention after it became New Orleans’ most devastated neighborhood from Hurricane Katrina in 2005. The predominantly black and impoverished neighborhood was highlighted in Spike Lee’s acclaimed HBO documentary, When the Levees Broke.

The Lower 9th Ward’s destruction by Hurricane Katrina was largely caused by a storm surge that came from three areas at the Mississippi River-Gulf Outlet, a shipping canal built by the Army Corps of Engineers in the late 1950s. Homes were not only destroyed, but also moved from their foundations and even flattened by a wayward large barge. The foot of the Mississippi River levee, the area’s highest point, had as much as 3 feet of water.

Many people drowned. Others suffered different painful deaths. A month later, Hurricane Rita made it even worse. Many people left and never returned. Pack recalls feeling helpless when Hurricane Katrina hit while he was living in Dallas.

“What I remember most is watching on TV and actually seeing people that I knew on the bridge,” Pack said. “The cameras showed people going on higher ground by going on [Interstate] 10. And the cameras were showing people I knew. I saw neighborhoods that I dribbled a basketball and went to grocery stores in. I was like, ‘That’s my neighborhood.’ It was devastating and shocking.

Pack returned to the Lower 9th Ward in March 2006 to get a close view of his destroyed old neighborhood.

It was around the time of the first post-Katrina NBA game back in New Orleans as the then-New Orleans/Oklahoma City Hornets faced Kobe Bryant and the Los Angeles Lakers on March 8, 2006. Pack starred in high school at Alfred Lawless High, which closed after Hurricane Katrina. It was finally replaced 11 years later by a new high school controversially named after Martin Luther King Jr. instead of Lawless. As for Pack’s childhood home, it literally moved across the street during the flood.

“It was completely destroyed,” Pack said. “It’s amazing. When I went to see my old place, it wasn’t even on the same side of the street where it was. You know how devastating the flood was and how everything was effected by Katrina.

“Now, it’s an empty lot. Many lots are in the same condition.”

According to disastermap.net, there were an estimated 8,000 lives lost due to Hurricane Katrina and the levee failures in Louisiana. Those numbers were based on the 1,572 victims documented, an estimated 6,400 long-term deaths and 130 missing people. It’s uncertain how many of those people were from the Lower 9th Ward, but the neighborhood suffered its share of pain.

“It’s still tough for me because there are still remnants of it where it hasn’t bounced back,” Pack said. “Every time you drive through it, you see it. You’re reminded of it.”

Another cause of death in the Lower 9th Ward and New Orleans both then and now is violence.

As of Sept. 9, there were 114 murders in New Orleans in 2016. According to homefacts.com, the Lower 9th Ward’s ZIP code of 70117 (which also includes the St. Claude and Bywater neighborhoods) has an unemployment rate of 6.8 percent with a population of around 20,000 people and is predominantly black. According to point2homes.com, the total crime risk in the Lower 9th Ward is four times more than the national average, the personal crime risk is five times more, the murder risk is eight times more and the robbery risk is six times more. Areavibes.com described the Lower 9th Ward as “barely livable” with an “F” rating in education, crime and employment.

Pack recalls how hard it was as a child growing up in the 1980s in the Lower 9th Ward trying to get home from playing basketball at the park or going to school with the threat of violence. He actually had a gun put to his head at 14 years old by a kid who he had an altercation with. Fortunately, the trigger wasn’t pulled.

“I think about it every time I drive on the street where it happened on Law and Charbonnet,” Pack said. “He put the barrel of his grandfather’s gun next to my head, but he didn’t pull the trigger. His grandfather called for him to put the gun down. He put the gun on the ground and I ran away. If it were to happen today, I would be dead.”

New Orleans Police Lt. Rhett Charles recalled how bad the Lower 9th Ward was during his time patrolling it, and remembered it having the nickname “Dead Boy.” He was a police officer there from 1990-95 and 2001-03, and said he knew every “murder victim.”

“It was a regular ‘hood,” Charles told The Undefeated. “I won’t go as far as to call it ‘Little Beirut.’ But we had our problems with drugs. There were guys who wanted to belong to a gang. There were hoodlums who wanted to create mischief.”

As a proud police officer, Charles found the little girl’s fear of police painful and troubling.

In his 27 years as an officer, he said it pains him every time he hears a fellow cop has been killed or hurt an undeserving person knowing that the majority of police officers like himself are law-abiding officers who want the best for the community. Charles has noticed more stares of late from people he knows fear him in his police uniform without knowing him.

The New Orleans native worries about the lack of new police officers joining the ranks due to fear. He also believes some kids in neighborhoods such as the Lower 9th Ward are scared of or bitter toward police officers who have arrested breadwinning family members and friends who have actually done wrong.

“The men and women that do this job do it because we love it,” Charles said. “I’m not an athlete or a plumber or a lawyer, but I can do 100 percent police work. It hurts to be perceived as a bad person knowing that if a person needs help I will always be there. For 27 years, I’ve taken an oath and to think that people would think that I’m a bad cop stings. It’s hurtful like you wouldn’t believe.

“Parents are telling their kids to ‘watch out for that cop.’ The kids believe something bad will happen. I tell parents not to tell that to your child. I always go to shake a hand of a kid. I am not going to do anything to purposely hurt them.”

The Lower 9th Ward is still predominantly black, but a growing number of whites have moved into the neighborhood after buying and refurbishing homes. Charles said the area is slowly gentrifying and wouldn’t be surprised if the neighborhood continues to change in the coming years.

“Listening to the New Orleans news every day, the Lower 9th Ward still has its crime. But it’s not as rampant as it used to be,” Charles said. “When I was there, it was like how Chicago is now. There could be three to five murders in a day. But with gentrification, there are more whites in and more blacks out.

“The new people are taking double shotgun homes and making one big house. A home my grandmother might have bought for $30,000 is now being redone and sold for $300,000.”

The Back To School And Wellness Expo was held at the Sanchez Center, which is a $20.5 million, two-story facility with an indoor swimming pool, senior center, health clinic and New Orleans Police Department substation that replaces the old facility destroyed by Hurricane Katrina.

The event included preventative screenings for vision, dental, blood pressure, cholesterol and glucose. There was a focus on financial health, that included aid on home purchases, tax preparation and fiscal advice. There were psychologists on hand, which Pack said was important since discussing mental health is often viewed as “taboo” in the black community. There were free backpacks with school supplies for kids, food, haircuts for boys and hair styling for girls. Pedesclaux also put the kids at the community event through different exercises to show them how best to deal with law enforcement, and answered their questions.

Pack was also very enthusiastic about the positive police presence and was proud of the positive community event in a battered neighborhood.

“A lot of kids have to go out of the neighborhood to go to an event like this,” Pack said. “We brought an event to their neighborhood, where they can participate in a health and fitness side. They got the school supplies they will need for the school year.

Pack said that seeing all the kids made him feel like there is “life back in the Lower 9th Ward.” He isn’t certain what the future holds in his old stomping grounds, but he believes he has a “responsibility” to give back to a place that was the foundation for his success.

“They mean everything,” Pack said. “This community raised me. As a young adult coming in the Lower 9th Ward, people saw that I had talent and could go places. When people saw that something wasn’t right they would try to get me away from it. Teachers spent extra time to make me aware of what I needed to do to go to college. It raised me.

“Doing this event, it made me see that there were other kids like me in that crowd. It makes me want to reach out. I have an obligation to reach out to make sure they have an opportunity, as well.”