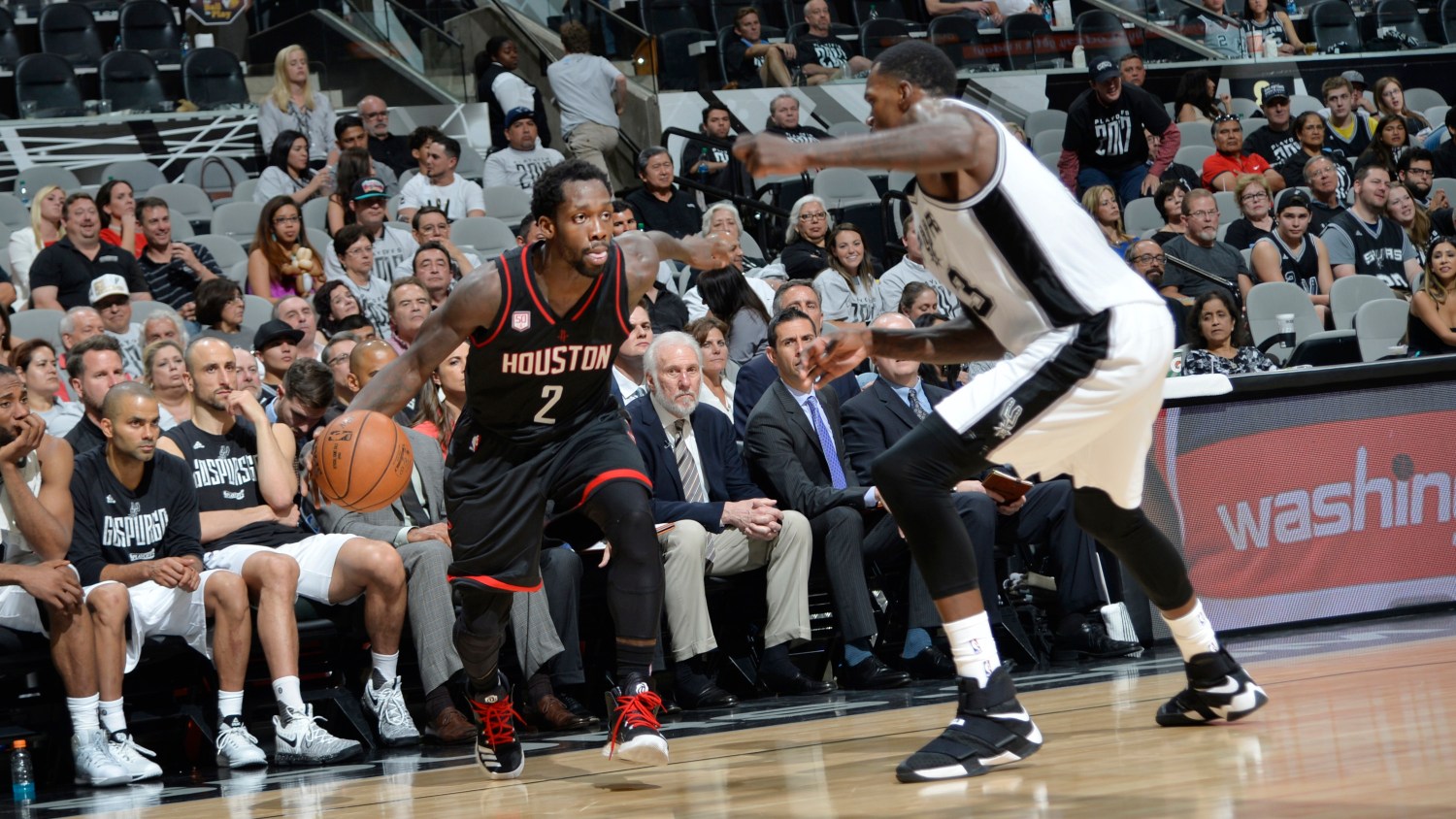 Patrick Beverley is known for livening up the Houston Rockets’ locker room with his rap skills. Sunday was different. There was no freestyle or head-bobbing, only tears of pain as Beverley mourned the death of his grandfather, which he learned of before departing to the Toyota Center for an NBA playoff game against the San Antonio Spurs.

“He is usually like a radio when he comes in,” Rockets guard Bobby Brown told The Undefeated “Rapping loud whatever song he had in his car. He didn’t do it today. He was crying. His eyes were watering. I knew it had to be something serious.”

Beverley’s grandfather, Rheese Morris, died in Chicago on Sunday before the Rockets’ 125-104 victory over the Spurs in Game 4 that evened-up the best-of-seven second-round playoff series. A roughly four-minute postgame media address by Beverley ended abruptly after he became overwhelmed by emotion.

Beverley gave no details as to how his grandfather died or his age. But he made one thing clear: Morris made a tremendous impact on his grandson.

“I wake up from a nap, the usual nap every day,” the 28-year-old Beverley said. “To hear that the person that raised you and nine other cousins, or siblings or whatever, to hear that he passed … The man of the family. … It’s tough, man. Tough.

Beverley said he called several family members in his hometown of Chicago after getting the devastating news. The subject of whether he should play in the Rockets’ playoff game came up hours before tipoff. The hard-nosed guard strongly considered missing the game and heading home to be with his grieving family.

Beverley listened to his loved ones’ request as they told him to stay and play.

“I’m a really strong guy, and I can deal with a lot of things,” Beverley said. “But I can’t deal with anybody suffering. He suffered, but he’s in a better place now. I tried to go out there and play as hard as I could for my teammates tonight, man. It’s just tough. I have to be there for my grandmother. That’s the only man she knew for the last 26 years.

Beverley’s locker is sandwiched between the lockers of Brown and veteran forward Trevor Ariza. Once Beverley arrived to the locker room in tears, they quickly realized something was gravely wrong and did their best to try to console their teammate.

“I was one of the first people that saw him as he came into the locker room,” Brown said. “You could see it on his face. He just broke down crying. At that time, I knew it had to be something. Me and Trevor, we comforted him right when he came in. It’s tough.”

Said Ariza to The Undefeated: “I don’t think a lot of people knew. I knew because we share a locker next to him. He was on the phone. For me, it’s just trying to read his body language and see what he is feeling at the time. He’s just a tough dude. A real tough dude.”

Beverley tried to compose himself the best he could when he went to the Toyota Center floor to take shots as he usually does pregame. But once his emotions hit hard again, he stopped shooting, grabbed the ball and sat on the baseline as tears welled in his eyes. Rockets assistant coaches and ball boys consoled him. He took a couple of more shots before becoming overcome by emotion again. He departed to the Rockets’ locker room where he sat at his locker and sobbed.

Beverley touched his heart and pointed toward the heavens several times on the hardwood before the game began. The Rockets’ emotional leader nailed a 3-pointer for the first points of the game just 57 seconds in, pointed to the sky and wiped tears with his left hand as he jogged to the other end of the floor. He finished with 10 points, including two 3-pointers, and six assists in 25 minutes. Several condolences were offered after the bittersweet triumph as Beverley headed to the locker room with a white towel over his head.

“I didn’t even know about the loss of his grandfather,” Rockets guard James Harden said. “He’s just a warrior.”

Beverley might not have had a bigger fan than his grandfather. And considering his road to the NBA, it was easy to understand why his grandfather respected him so much.

After starring at the University of Arkansas for two seasons, Beverley was drafted by the Los Angeles Lakers with the 42nd overall pick in the 2009 NBA draft before his rights were traded to the Miami Heat. The 6-foot-1, 185-pounder was not brought into training camp by the Heat after he was drafted.

He played his first two professional basketball seasons with Dnipro of the Ukrainian Second Division and Olympiacos Piraeus of the Greek League, respectively.

Beverley played for the Heat’s summer league team in 2010 and was invited to training camp the season that LeBron James and Chris Bosh joined Dwyane Wade. Beverley, however, was waived in Miami’s final cuts on Oct. 25, 2010. Next up was Russia, where he played for Spartak St. Petersburg and was the 2011-12 EuroCup Basketball MVP.

Beverley recalled the support his grandfather gave him while he was grinding overseas.

“Everyone knows I worked extremely hard to prove myself each and every night,” Beverley said. “And to have someone right there supporting me the whole way… Wore my Russian jerseys every single day of his life, man. To have a person like that taken from you is hard, so hard. But you know, there is a bigger plan.

“I’m going to keep the faith and be there for my family. Anyone who has grandparents, mothers, whatever, to have them taken away from you is super, super hard.”

The Rockets signed Beverley on Jan. 7, 2013, and sent him to their D-League Rio Grande Valley Vipers. He finally made his NBA debut on Jan. 15, 2013, and has been with the Rockets ever since after proving himself as one of the toughest perimeter defenders in the league. The 2014 NBA All-Defensive second-team selection has averaged 9.3 points and 3.4 assists in 291 NBA regular-season games.

Beverley made less than $1 million in each of his first three NBA seasons. The Rockets rewarded the now-starting guard with a four-year, $25 million contract in 2015.

“There has been so much adversity through his life that he’s had to go through to get to this point …,” Harden said. “No matter what obstacles are coming his way, he’s going to get through it. Obviously, he didn’t take the get-drafted-high-to-get-to-where-he-is [route]. He had to go overseas. He had to find his way.

“Once he got his opportunity, he kept going. That is why he is a starting point guard for the Houston Rockets now. It’s a tough, tough fight for him, especially with what he is going through with his family. He is a key piece to what we do.”

Beverley missed practice Monday to travel to Chicago but he is expected to play in Game 5 in San Antonio on Tuesday, a source said. The Rockets announced Monday that center Nene is out for the postseason with a torn left adductor.

Harden said the Rockets players have talked all season about dealing with adversity. With Beverley displaying a memorable example of strength through adversity, the NBA’s MVP candidate expects his team to be ready for the challenge regardless of who is in uniform.

“We’ve been saying all year long that adversity is going to hit,” said Harden, who had a game-high 28 points and nailed four 3-pointers. “It’s how you respond from it.”