Sachia Vickery isn’t having it with racist trolls

Three months ago at the BNP Paribas Open, Sachia Vickery first appeared on the radar of many sports fans when she flashed the “Wakanda Forever” salute after her win over the No. 3 player in the world, Garbine Muguruza.

On Monday, Vickery, 23, stepped into the spotlight again by lashing out at trolls on social media, unleashing firm and steady backhands that might earn her consideration for a social media position with Wakanda’s female security team, the Dora Milaje, from Black Panther.

Vickery, currently ranked No. 82 in the world, issued this warning:

After years of racial abuse from internet trolls , I’ve decided to be queen petty and clap back at everything I’m sent from now on 🙃#warning

When Jarmere Jenkins, the hitting partner of Serena Williams, responded with a frowning face emoji accompanied by a GIF of comic book character Thanos from The Avengers, Vickery replied:

lmao I’m comin for they necks out here they gon call me thanos jr. 😂 sick of it bruh 😂😂

At some point Monday, a day on which Vickery lost to Naomi Osaka at the Nottingham Open in the United Kingdom, one person tested Vickery, suggesting in a tweet that she “… shut up you’r [expletive] mouth.”

Vickery, true to her word, responded to the man: “be careful before you fly away with them dumbo ears.”

Vickery, speaking to The Undefeated from England, where she’s playing grass-court matches in preparation for Wimbledon, said she often encounters hateful messages and comments on her social media pages, including many with racial overtones.

“If I shared some of it with you, you’d be shocked,” Vickery said. “Being black, I’ve been called monkey, slave, the N-word, housekeeper, the help — pretty much every racist name out there on planet Earth.

“I know you have to have thick skin to be on social media, but I’m human, and at a certain point there’s one day you might snap a little bit.”

Monday was that day for Vickery, who, trolls aside, is enjoying a breakthrough season that includes her signature win over Muguruza in Indian Wells, California.

“Some of these people from time to time need to be checked,” Vickery said. “My coach was like, ‘Don’t bother with them, just put your phone down and take a walk.’ ”

Vickery, instead, decided to let off steam and make good on her promise.

One tweet, which she later deleted, was a screenshot of a Facebook message she received where she was called “Monkey” and “Fat girl.” After Vickery posted a Twitter response to that message, someone sent her a message saying, “… racist abuse is awful, but surely the reply isn’t much better??”

Vickery first tweeted: “would you like to see some of the messages I receive daily? At some point enough is enough.”

That was followed by this: 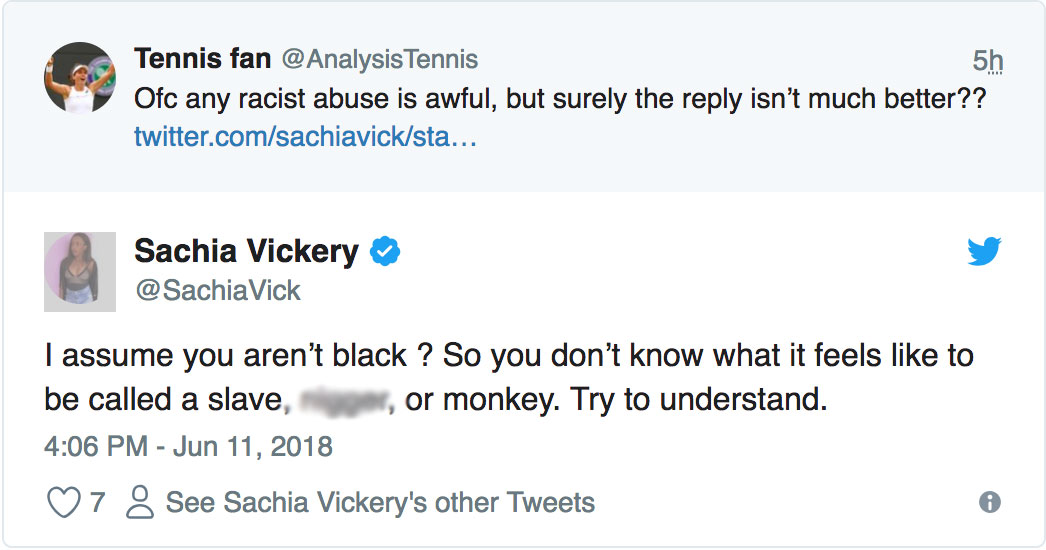 Racism involving athletes is a problem, whether it’s a fan taunting San Antonio Spurs guard Patty Mills during a game, the N-word being painted on the gate of Cleveland Cavalier LeBron James’ home, or a soccer player from England suggesting his family skip the World Cup for the fear of racial abuse.

By revealing their opinions and lives on social media, athletes and others expose themselves to keyboard thugs who become emboldened by distance and anonymity.

Vickery said she’s received abuse ever since she’s been on social media, and she has occasionally dropped her accounts. She says many comments come from gamblers, and she’s even received some threatening comments on her phone.

“Who knows how they get my number,” Vickery said. “And I’ve gotten death threats, people telling me they hope my family gets cancer, and someone told me, ‘I’m going to find you tomorrow and kill you.’ You see that time after time and you lose it a bit.”

When one person on Twitter suggested during Monday’s clapback session that engaging with social media trolls wasn’t worth her time, Vickery responded: