Shad Gaspard wanted me to know he was, in fact, a gangster.

I was interviewing the former WWE wrestler in the summer of 2016 for a story on The New Day, a trio of black professional wrestlers who had improbably become the most popular act in the company despite WWE’s tawdry history surrounding race and the treatment of African American performers.

Gaspard, whose death was confirmed Wednesday morning after he was caught in a riptide with his 10-year-old son last weekend (his son was rescued), was best known for his work in the tag team Cryme Tyme alongside fellow black wrestler Jayson “JTG” Paul. Cryme Tyme, at the time and in hindsight, was viewed as one of the most racially offensive acts in the history of professional wrestling, two perceived gangbangers menacingly running roughshod through WWE.

The duo’s theme music started with the lyrics, “Yo, yo, yo, yo. Pop a 40 and check your rollies, it’s Cryme Tyme.” Gaspard and Paul would dress in oversized denim jeans, Timberland boots, white tank tops and grillz. Both men sported cornrows. They had finishing moves called “Thugnificent” and “Da Shout Out.”

In the long history of racism in professional wrestling — a history that included blackface, Confederate flags and the on- and off-screen use of the N-word — Cryme Tyme felt like the zenith. The characters that Gaspard and Paul played sexually harassed white women, constantly ran financial scams on the other wrestlers and were the butt of every joke about race. They were examples of the worst perceptions of how black people act in America, from vernacular to wardrobe.

But when I spoke with Gaspard that day back in 2016, he was neither ashamed nor apologetic about his time in WWE. For Gaspard, like many black wrestlers before him, perpetuating racist stereotypes as a member of Cryme Tyme was the balance he had to find between being a professional wrestler in the largest sports entertainment company in the world and adequately representing his race on screen.

Gaspard came from a family of fighters. His father used to fight for money on the streets of Haiti before turning professional as a boxer at the age of 18. Gaspard’s mother was a kickboxer trained in Muay Thai.

Despite protests from his father, Gaspard gravitated to fighting, too, picking up boxing when he was 5 years old. He would eventually take up jiujitsu and kickboxing as well.

“My father looked at me and he really wanted me to be everything that he could have been, because he didn’t have the opportunity,” Gaspard told me. His father wanted him to be a lawyer, like Gaspard’s grandfather in Haiti.

But Gaspard also took a liking to professional wrestling. After his family moved from Haiti to New York in the mid-1980s, Gaspard’s father took him and his brother to Madison Square Garden for untelevised WWE shows. Not knowing the matches were scripted and choreographed, he wanted to be Hulk Hogan and become a wrestler when he grew up. 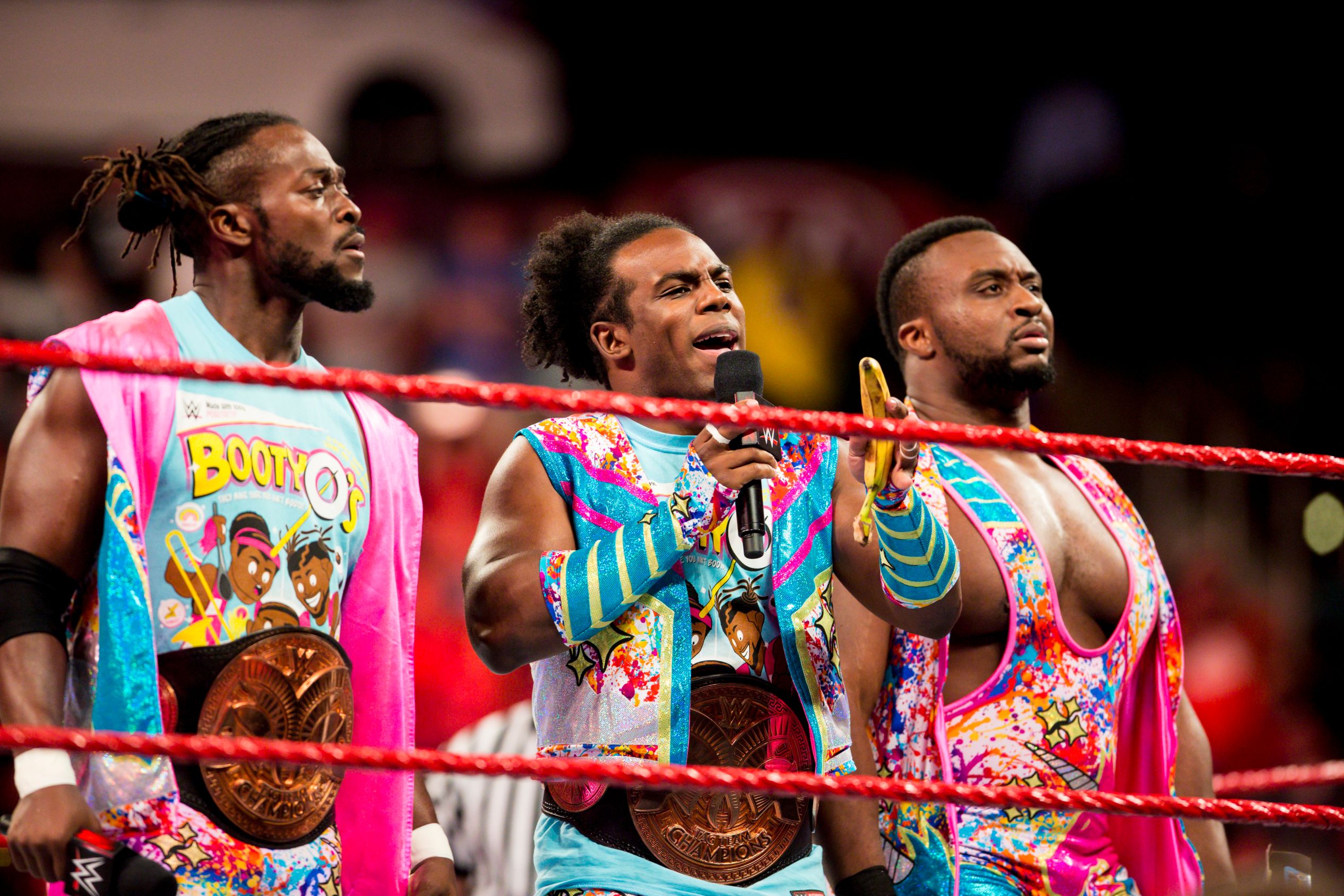 It’s a New Day at the WWE Read now

By age 15, Gaspard was living with relatives in Atlanta when he met Harrison Norris Jr., better known as former pro wrestler and bodybuilder Hardbody Harrison, who encouraged Gaspard to take up wrestling. Within six years, Gaspard tried out for WWE Tough Enough, a reality television show about finding the company’s next superstar performer. Backstage at a house show at Madison Square Garden in 2002, Gaspard, accompanied by his father, met WWE chairman and CEO Vince McMahon. McMahon asked Gaspard’s father if he would like to see his son’s name on an arena’s giant monitors, and then later cut a promo about Gaspard being “your next world champion.”

Gaspard was sent to the company’s training facility, Ohio Valley Wrestling (OVW), in Louisville, Kentucky, where he met Paul and formed The Gang Stars, whose name was changed later to Cryme Tyme. The duo’s characters were essentially hustlers who spoke in what can best be described as exaggerated Ebonics. They dressed like actors in anti-gang public service announcements. No matter how Gaspard or Paul felt about the gimmick, which they have said they came up with themselves, McMahon was hooked.

“I saw the ‘Yo, yo, homeboy’ thing you guys are doing in OVW,” Gaspard remembered McMahon telling him. “And I f—ing loved it.” McMahon immediately wanted to put the act on the company’s top-rated television show, Monday Night Raw.

Gaspard had a choice: Change the gimmick and toil away in the developmental stage, or take Cryme Tyme to a national audience.

But Gaspard wanted to make two things clear to me when we spoke: In his past life, he was the gangster his character was perceived as being, but Cryme Tyme wasn’t a group of gangsters.

When he was younger, Gaspard ran with the wrong crowd and did things he wasn’t supposed to. As a teen, he was boxing adults in a strip club. A close family friend was Frank Lucas of American Gangster fame. (“Uncle Frank” is what Gaspard called him.) “I made money protecting drug dealers. I made money collecting money. I made money doing real gangster stuff,” he told me of his time before working at WWE.

But the character he played on screen, he argued, was only a gangster if you considered a black man in streetwear to be involved in gangs. Yes, he wore tank tops, baggy jeans and Timberland boots, but so did white wrestlers. He had cornrows, but that’s because he liked having long hair. Gaspard didn’t even rap, even though it was assumed Cryme Tyme did. “I don’t rap, I’ve never rapped,” he said. “If you can find any footage of me rapping on WWE TV, I would love to see it.”

Cryme Tyme, he added, was just him and Paul being themselves. Any labels put on them were just people projecting their insecurities about race onto them.

“It always bothered me that when ‘us being us’ playing practical jokes on people was considered gangster, but when Shawn Michaels and Triple H did it, they were considered entertaining TV,” he said, referring to the two white men who made up the popular late-’90s act D-Generation X.

I pushed back on that statement, pointing to the time Michaels told Triple H during a skit that he could understand the slang Cryme Tyme was using because “I speak jive.”

That had offensive racial undertones, did it not?

But Gaspard took credit for pitching that line for Michaels. He poached it from a scene in the 1980 comedy Airplane! He was OK with racial comedy as long as it didn’t make him feel uncomfortable.

Once, Gaspard said, a writer pitched a segment about fried chicken. Gaspard knew the bit was funny, but had to squash it because if Cryme Tyme did a fried chicken joke once, they’d be expected to do it again.

Six years removed from his time in WWE, Gaspard told me his concern during and after his employment was the glass ceiling placed on the creativity of black wrestlers’ characters. He believed that black wrestlers and other performers of color could only be the color of their skin.

“You kind of get the sense that the black guy will be the black guy. The Asian guy will always have an accent rather than just being a guy of Asian descent. The guy who is Samoan will have to have some kind of face paint,” he said.

When speaking about The New Day, he believed the trio could be the fun-loving act that audiences gravitated toward, but they could only go so far in the company based on how they looked. He didn’t think any member of the group would be allowed to be world heavyweight champion, a mark of a performer’s popularity and/or marketability, which at that time had only been held by three black men in the company’s history.

But three years later, at WrestleMania in 2019, Kofi Kingston, the eldest member of The New Day, won the heavyweight championship. That same night, a video was posted on social media of Gaspard and another black wrestler, Hassan Hamin Assad, known as MVP, watching Kingston winning the match. Gaspard began to cry as the two embraced. There was an air of “we finally made it.”

Back in 2016, when I asked Gaspard about never becoming the world champion McMahon said he would be, he blamed it on race and backstage politics. But he was content with how his wrestling career had ended, Cryme Tyme and all.