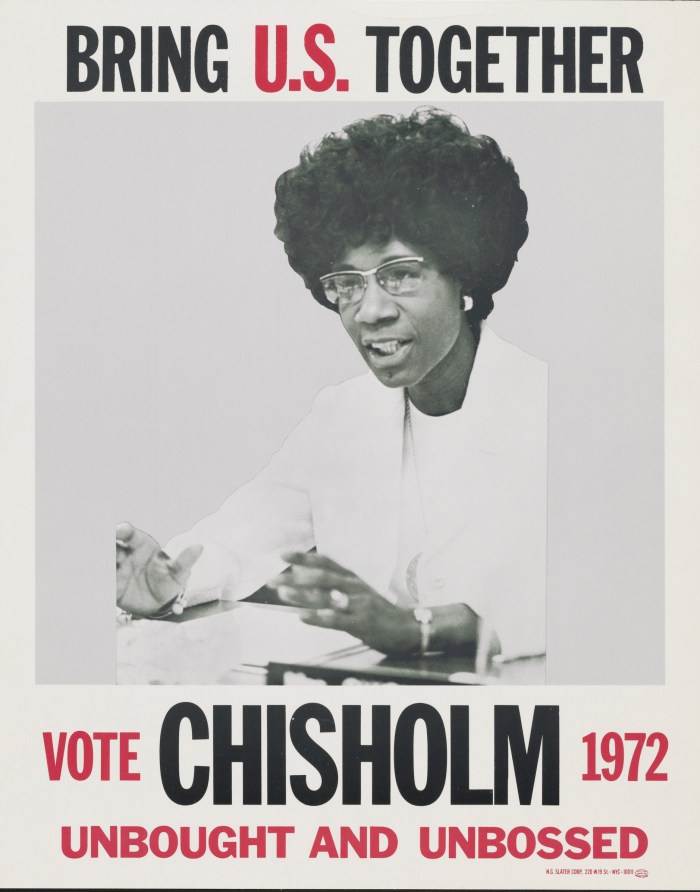 Black women have always put in the work. If you want to put it in numerical terms, try out this number: Ninety-four percent. That is the percentage of black women who voted for Democratic candidate Hillary Clinton to be the first woman to become president of the United States. Black women have been putting in work as candidates, and at the ballot box since the days of the civil rights movement, and one of the toughest was Shirley Anita Chisholm. Chisholm encountered racism, misogyny, and death threats throughout her political career. She had to deal with disdain from black male political leaders. But through it all, she was her own woman, unbought and unbossed, which is why the phrase became her 1972 presidential campaign slogan.

“That slogan was who she was, she lived it. Her involvement in politics was her asserting herself. She didn’t ask for permission, she just did it,” said Shola Lynch, a filmmaker who made the 2005 documentary CHISHOLM ’72: Unbought & Unbossed. “People were upset that she dared run, when she wasn’t going to win. Her bravery is doing what she said what she was going to do.”

In the summer of 1971, a year before her presidential campaign, Chisholm’s charisma and fortitude attracted Robert Gottlieb, then a 21-year-old student at Cornell University. As her congressional intern in Washington, D.C., he had a key role in the design of the poster. Gottlieb could see that “unbought and unbossed” was not just a slogan to Chisholm, but a way of life. “That was her slogan throughout her political life,” said Gottlieb. “She was beholden to no one. She truly represented someone unbought and unbossed because of her principles, and her fortitude, not because of false bravado and money. She only took orders from the people. She gave a voice to the disenfranchised.”

“She was beholden to no one.” — Robert Gottlieb

Once Chisholm formally announced her candidacy on Jan. 25, 1972, Gottlieb assumed the role of national student coordinator for the campaign. Although he found some success garnering student support for Chisholm, there were unexpected obstacles. According to Gottlieb, his time on Chisholm’s campaign “exposed division between her and African-American males and white feminists. They gave lip service, but they went toward [South Dakota Sen.] George McGovern.”

Harlem native Charlie Rangel, longtime U.S. representative for New York’s 13th district, witnessed Chisholm’s political journey, both in Congress and during her presidential campaign. “She was a pioneer,” he said. “No question about it. She broke the ceiling for women, generally, and black women, specifically. A very, very strong woman.”

As strong and steadfast as Chisholm was, Gottlieb saw that it “created enormous disappointment and it was hurtful.” “When I ran for the Congress,” Chisholm told the Associated Press in 1982, “when I ran for president, I met more discrimination as a woman than for being black. Men are men.”

Among her biggest detractors were some African-American men — Julian Bond, Jesse Jackson, Louis Stokes, to name a few. “You see the black politicians are no different from the white politicians,” Chisholm once said. “They’ve made their deals, they’ve made their contracts, because they didn’t believe that Mrs. Chisholm knows how to maneuver or what have you.”

Chisholm was not for backing down, even when she was criticized for being endorsed by the Black Panthers, and she did not reject their endorsement.

“When I ran for president, I met more discrimination as a woman than for being black. Men are men.” — Shirley Chisholm

She had some small victories, such as successfully filing a complaint with the Federal Communications Commission, scoring a chance to go toe to toe with McGovern and former Vice President Hubert Humphrey in the fourth and final debate of the Democratic primary; and collecting several delegates in states such as Ohio and New Jersey. But by the time she got to the Democratic convention in Miami Beach, it was painfully obvious that she was not going to win. Compared with her Democratic primary opponents — McGovern, Humphrey, and Alabama governor George Wallace of “Segregation now, segregation tomorrow, and segregation forever!” infamy — her campaign was woefully underfunded. “Her campaign was financed on her credit card,” Gottlieb said. “It was very hard on her financially.” Gottlieb and a few others stuck by her. “Her campaign lost a lot of people and she didn’t have a lot of money,” Gottlieb recalled. Still, she bowed out gracefully to McGovern, who ended up losing to Republican nominee Richard Nixon.

Chisholm spent the rest of her time as a congresswoman fighting the good fight, opposing the Vietnam War, and continuing to give, as Gottlieb said, “a voice to the disenfranchised.” She co-founded the National Political Congress of Black Women, campaigned for Jesse Jackson’s presidential run in 1984 (even though he backed McGovern in 1972), and went on to teach politics and sociology at Mount Holyoke College from 1983 to 1987.

We all have the fear within us that makes us cower and close our eyes. But we also have the example of Chisholm. She didn’t let racism, or sexism or politics get in the way of her ambitions and her fight for true unity in the United States. She “was her authentic self,” according to Lynch, truly unbought and unbossed. She is 94 percent. Not perfect, but pretty close.

Kwesi Foli is a video producer and occasional writer for The New York Times, Huffington Post and The Undefeated. The only team he has ever cried for are the Black Stars, soccer team of Ghana.