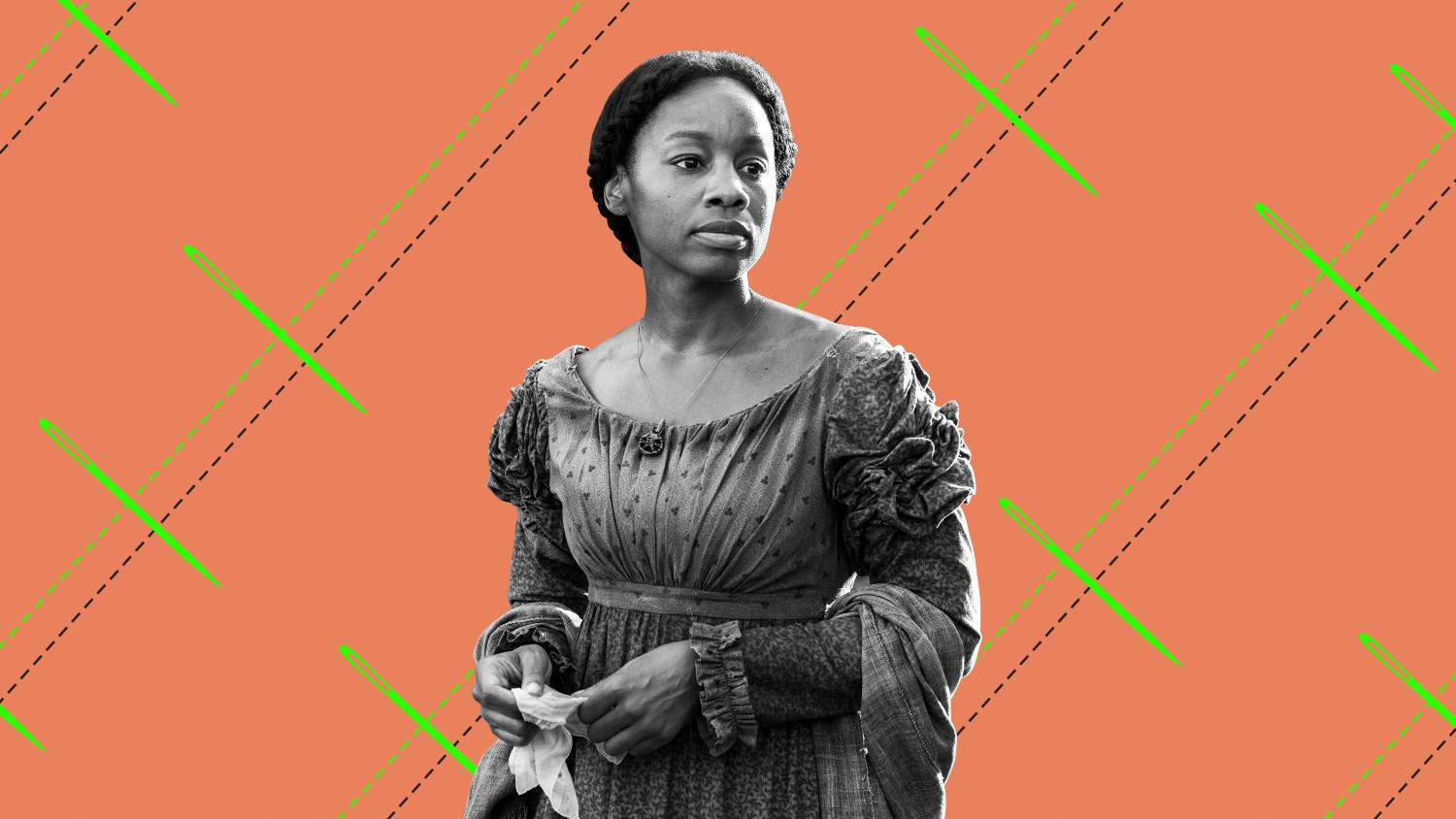 Slavery in America is no longer ‘Underground’

Is it weird that slave characters have never looked better?

Harriet Tubman may just be the most stylish woman on prime-time television right now. The fearless, gun-toting former slave who escaped a Maryland plantation in 1849, rescued some 70 enslaved people over 11 years, and will soon be new face of the $20 bill, finally got her prime-time closeup.

On the season two premiere of WGN America’s period drama Underground, we see Tubman in neat, braided hair, played by actress Aisha Hinds, and outfitted in a white cotton shirt, a full navy skirt with leather suspenders and a rifle slung over her shoulder. It’s a rustic Wild West getup straight out of a Ralph Lauren dude ranch fantasy.

True, it’s a Hollywood depiction of a real person — but it happens to be a historically accurate look. Well, accurate enough. For the Underground costume designer charged with bringing Tubman and other enslaved (fictional and long dead) characters to life on the screen, the challenge was putting good-looking, charismatic actors in new clothing that could shine a bright light on the brutal reality of slavery with just enough 2017 glow to make the action exciting and compelling.

“When you look at daguerreotypes of the period, the eyes of the enslaved people were so fierce and dead at the same time,” said costume designer Karyn Wagner of her Underground creations. “They’re holding onto their dignity and their pride with every morsel of their conscious being. And, at the same time, they had to try to hide that from their owners. They had dual emotional lives,” Wagner noted. “That’s what a costume designer is really trying to get every single time.”

Since its debut in March 2016, Underground has been a critical and ratings success for WGN America (averaging 3 million viewers per episode in its first season). The History Channel’s 2016 Roots reboot, filmmaker Nate Parker’s 2016 controversial indie favorite The Birth of a Nation and the Oscar-winning films Django Unchained and 12 Years a Slave didn’t gloss over the complexities of Civil War-era America.

Each of these stories managed to entertain without falling into the cringe-inducing “Yes, suh, boss!” portrayals of black folk found in movies such as Uncle Tom’s Cabin (1927), The Birth of a Nation (1915) and Gone with the Wind (1939). (A notable exception is the performance of actress Hattie McDaniel, who won the Oscar for best supporting actress for her portrayal as Mammy, the first Academy Award for an African-American.)

“Yes, there were people who struggled, but they were also elegant and had cheekbones and were beautiful, too.” — Amirah Vann

Underground has reached a youthful audience by embracing a fast-cut editing style, a soundtrack that leans heavily on hip-hop and R&B, and starring cast of up-and-coming actors, many of whom are African-American, as are many of the showrunners, directors and producers. One of the show’s executive producers is singer John Legend, who makes an appearance in season two as abolitionist Frederick Douglass.

The aesthetics of the enslaved characters on Underground and other slave narrative dramas have thankfully been modernized. Where enslaved characters were once only depicted on screen wearing soiled and ragged clothing, with unkempt or matted hair and no shoes, contemporary costume designers understand the great dramatic possibility in showing a diverse assemblage of attire. Brightly colored bonnets and bold, patterned head scarves pop against the backdrop of cotton fields or swampy country woods. Clothing handed down from white slave owners is easily recognizable — viewers remember seeing the hues and textures from earlier scenes.

Forty years after the original Roots television series aired, costume designer Ruth Carter dug deep through Library of Congress photos and art history books about Southern plantation life to mine the nuances of what people wore. The rough shift dresses worn by women who worked in the fields were likely to be made from a scrap of leftover fabric used by a plantation mistress for dining room curtains. The black jacket, white linen shirts and pants worn by male slaves working inside the big house of a wealthy slave owner would likely have been an actual livery uniform.

“There were so many amazing details to flesh out,” that distinguished enslaved people, free people of color and slave owners, Carter said. Color palettes veered from indigo blue, bright marigold and deep crimson, a color beloved by many enslaved people because of its African fabric-dying roots. Head scarves were almost always worn by enslaved women as a symbol of their “home” plantation, but the way they tied their head scarves gave them a small opportunity for personal creativity and individual freedom.

Wagner, costume designer for Underground, has designed costumes for The Notebook, The Green Mile and the 1997 film Eve’s Bayou. She spent months researching “a very dark subject matter,” Wagner said. “It’s difficult to submerge yourself in slavery as a subject – you feel a sense of fight and flight to keep yourself from going there.

“But immersing yourself in the details about fabric, color, texture and practical matters helps. As a costume designer, you have a covenant with the viewer that you’re going to indicate the period with the shape of a skirt or bodice, or the fabric worn by an enslaved person working in the field. You have to establish a basic fact before you can embellish it.”

Show creators and actors often view costumes as a vital part of the storytelling. Think of how the costumes on television shows such as PBS’ Downton Abbey and Mercy Street, AMC’s Mad Men and Cinemax’s The Knick lavished establishing shots on period details such as men’s ties, the collars on women’s dresses or the hem lengths on garments worn by servants or plantation owners. These small visual cues enhance the overall mood and tone of the piece, and that helps to create something that is plausible and compelling.

But the best costume and set designers create on-screen environments that are incredibly plausible and nothing looks out of place, said Lisa Woolfork, associate professor of English at the University of Virginia.

“Whenever you start thinking ‘Is this authentic?’ you have to ask yourself, ‘Why do you need it to be so?’ ” Woolfork pondered. “Even the word ‘authentic’ should inspire more skepticism than comfort. For some, when you say something is authentic, it implies that it’s something you don’t need to think about anymore.”

The aesthetics of the enslaved characters on Underground and other slave narrative dramas have thankfully been modernized.

This bumps up against an often repeated criticism of television shows and movies with this particular narrative. People, especially African-Americans, are tired of seeing movies about enslaved persons. If you are looking for escapist entertainment, can the reality of slavery scratch your particular itch?

It can, Woolfork said, if you push against the notions of “how people form questions of identity, or questions of who is authentically black, who is and who isn’t real. You can look at a character and tell what their job is. Are they wearing an apron or clothes that are more loose-fitting because they worked in the fields?

“The challenge about outfitting an actor in ‘authentic’ slave dress is that there are very few records or portraits of slaves to create a costume,” Woolfork added. “Beyond that, what you really want to see is the attention to detail; it helps to give an overall picture of believability.”

(Of course, the filmmaker can sometimes shape the believability. Quentin Tarantino’s 2012 spaghetti Western revenge film, Django Unchained, featured actor Jamie Foxx’s memorable turn in an electric blue Little Lord Fauntleroy suit, and the elegant and elaborate attire worn by Chiwetel Ejiofor as Solomon Northup in Steve McQueen’s 12 Years a Slave (2013) challenged viewers’ expectations of how enslaved people of the time could be portrayed.)

For an actor, putting on the clothes of an enslaved person was like a soldier putting on his armor to go to battle, said Underground actor Aldis Hodge of his character Noah’s custom-made period ensembles. “The roughness of the cotton — you felt it putting on the shirt and pants. And those shoes were not running shoes — and we had a lot of running to do!” Hodge said with a laugh. “There wasn’t much support on the ankle or the sole, and the shoes would pretty much disintegrate.

“I could imagine having to still work out in the fields all day with bleeding and cracking feet,” Hodge added. The experience of wearing them “helped to keep us in an honest place.”

Donning the stiff corsets, undergarment layers and vividly colored cotton dresses was a difficult experience, said actress Amirah Vann, who plays Miss Ernestine on Underground. “The costumes were very heavy and a lot to take on, but it helps you get into the truth of the moment. I’m not used to corset life, and I would say, ‘Ugh, thank God!’ as soon as I took it off!”

The series shows enslaved people “who aren’t all downtrodden, and that’s the thing about this time,” Vann added. “Yes, there were people who struggled, but they were also elegant and had cheekbones and were beautiful, too. And wearing these costumes allowed us to be that.”

Modernizing history isn’t exactly what costume designers set out to do, yet diving into the details of the handmade clothing fibers and buttons, colors that would have been available as dye during the time, and the precise measurements and weights of the cloth used can be the creative tool that makes clothes look contemporary, yet true.

“At first, it was extremely challenging for me to think about needing to celebrate people who were enslaved,” Vann admitted. “But I realize that it’s a grand testimony of strength, perseverance, grace and courage. I’m so honored to be able to play Miss Ernestine.”