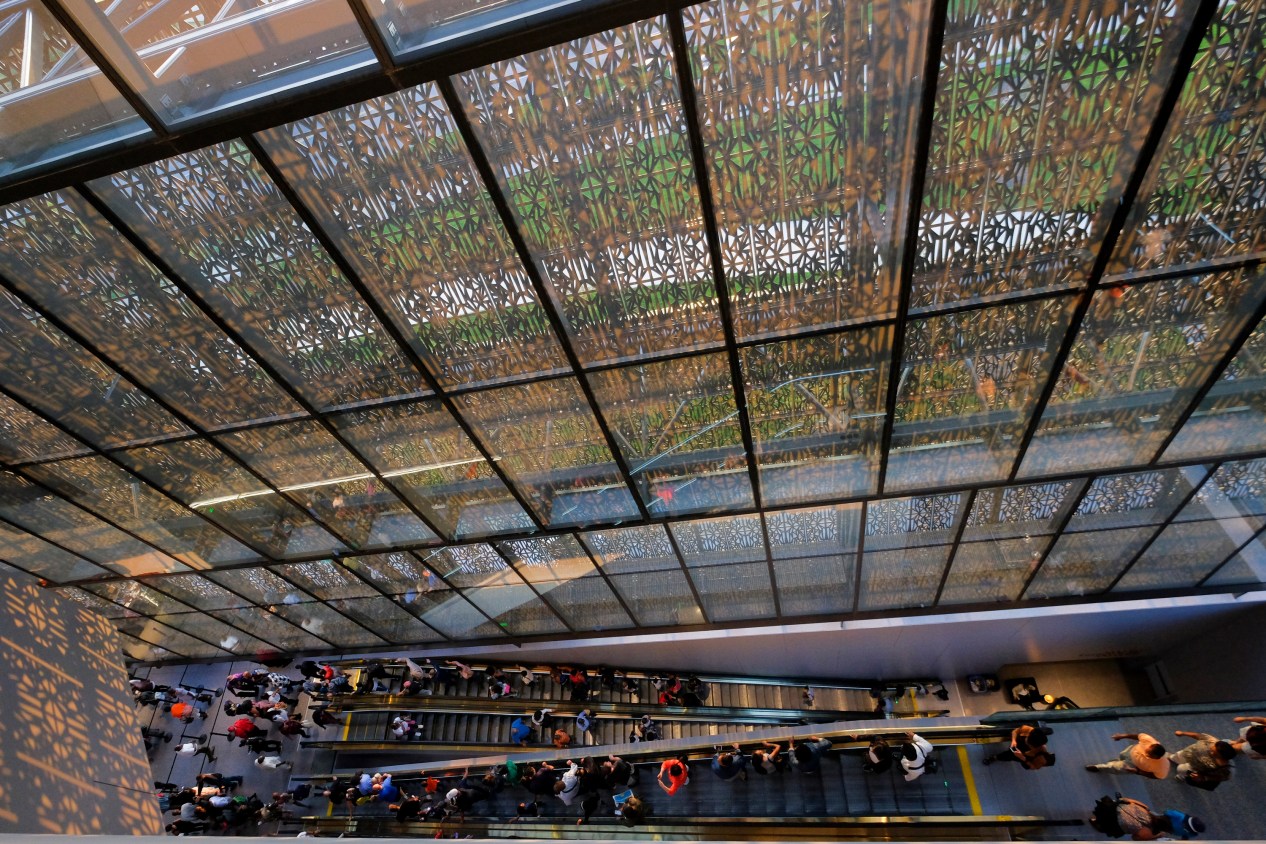 The many shapes of black space at D.C.’s African-American museum

New Smithsonian feels like family, with no need for code-switching

It’s light outside, but it’s blacker than three midnights on a five-acre corner of the National Mall.

And there comes a moment when you feel an ad hoc, temporal shift in the national order of things. U.S. Rep. John Lewis of Georgia speaks rhythmically of how our souls got over, and it hits you that if there’s anything blacker than this new spot in America, it’s got be Jesus himself.

“My dear sister, you know the great thing about us as African-Americans is that we’ve always had space,” said Sonia Sanchez, poet, author and essayist and a pioneering figure of the Black Arts Movement as she’s waiting in line for the ceremony. “But here, in this place called D.C., there’s a larger space being made now. And if you listen carefully and go through you will hear the voices of our ancestors.” The museum represents an invitation to a national understanding that says “We’re here. We’ve been here for a long time. We’re not going anyplace, we’re not leaving any place,” Sanchez said. And “this is our space, but out of this space we move out all over the world.”

Walk through the museum and everywhere you look, you expect to run into people you know. It’s the familiarity of culture coupled with the intimacy of skin. Before long you see groups in identical T-shirts. There’s yellow for the NAACP chapter, red for the high schoolers from UConn Scholars, and blue for the Taylor Family Reunion (got to have a family reunion in the African American museum). At any moment you expect to see folks posted up on the lawn grilling, or to see somebody throwing a white party. (Is it still a white party if it’s not on a boat? Such are the contemplations of black space.)

It feels as if the ground underneath the museum has been re-magnetized. Like the poles of America are switched and artifacts from the chairman of the Joint Chiefs of Staff belong alongside those from the Godfather of Soul. And it reminds you of Chief Justice John Roberts telling the crowd the Supreme Court failed when it ruled in the 1857 case of Dred Scott that a black man “had no rights which a white man was bound to respect.”

Chief Justice Roger B. Taney delivered the majority opinion in that case and white folks put a statue to that freak on the grounds of the Maryland State House. Yet this new spot has Harriet Tubman’s shawl, James Baldwin’s passport and loops DeRay Mckesson from Black Lives Matter on a video monitor.

U.S. Park Police officer William Honeycutt said his agency is responsible for all the other monuments that “our people built.” But, he said, “I feel amazing about this museum. That we have someplace dedicated to us and our history.”

This is a zone without translation. There’s no code-switching here. Get in where you fit in. Catch up. Stretch your imagination, and your humanity, or not, as the spirit leads you.

We done braided our hair, don’t mind if you stare.

In the 1980s, I wore shirts that read: “It’s a Black Thing, You Wouldn’t Understand,” or “Black to the Future,” and felt subversive. But the new museum showcases a way of walking through the world that recognizes African-American duality, and honors the multiple planes of black thought. (Like if my 14-year-old son takes off running down the street at top speed, we know the police will swear he’s a “bad dude,” but his sister will see the ice cream truck in the distance and speak of his love for chocolate eclairs.) Critics may charge that the space feels dense. I say it’s crowded, like my gra’momma house. Walking through the museum feels like the poem Ego Tripping (there may be a reason why) where Nikki Giovanni wrote: I cannot be comprehended, except by my permission.

Past the slave cabin, in the underground exhibitions, Marian Wright Edelman, founder of the Children’s Defense Fund, talks about how she’ll need to return to the museum to meditate. To teach children the truth and come to terms with what she calls our nation’s profound birth defects, “because we have to control our narrative and our future.”

Lamour Rogers, a train operator from Alexandria, Virginia, talks about the Jim Crow exhibition and his voice catches as he remembers his grandfather, a Mississippi sharecropper who moved North and lived long enough to retire with a house and a car and to see the country elect a black president. It catches at the thought of his grandfather achieving the small dignities “of the American dream that most of us try to achieve.”

Black space not only changes African-Americans, people tell me, it makes other museumgoers come more correct. “The white people have all been so friendly,” said Todd Jagers, a Washington, D.C., lawyer in private practice.

“We noticed it immediately,” said his fiancee Sharon Bland, an attorney and museum ambassador. The couple are standing near an exhibition featuring The Bronx (South South Bronx you hear in your head, because black history always has a soundtrack).

For some, Jagers speculates, it’s like a cultural exchange program. It might be one of the rare occasions in which white people are outside their element as the majority population, “so they have to adapt, and they’re overcompensating.”

But they’re not mad at the white friends who go out of their way to boast that they already have their museum tickets, or that whites who pass through the door seem to have figuratively been doused with a canister of act right.

Because out there in the world, there’s a congressman from North Carolina who says the people protesting against police violence in Charlotte “hate white people because white people are successful.” And too few white people, even those who love black culture, call out loudly, like they do at a Jay Z concert, to say he doesn’t speak for them.

All are welcome and may the truth set them free. But in this new spot, while white voices are not marginalized, they are uncoupled from their place as the righteous center of the natural universe. In a line to get into the ceremony, a white guy who says he’s with the media moves toward the front and the black woman behind me politely but firmly tells him that she’s a museum donor, that everyone has been waiting, and he agrees to step back. “Uh-huh, not today,” said the woman. Subtext: You misunderstand what type of party this is.

Heading upstairs you say what’s up to Chuck D and make a mental note to find him in the gallery that features Fight the Power.

Ann-Gel S. Palermo, an associate dean at a New York medical school said she sees the promise of the museum as a place for black and brown youths. “If you don’t know your history, you don’t know yourself and you’re likely to reinvent it, and it could be wrong. And it could be fake. And it could misguide and mislead you,” Palermo said. She worries that young people don’t have the bandwidth “to hold the dual tensions all the time. Because it’s [expletive] tiring, you know?” But that’s what we do. “Here we are from the bottom to the top, quoting Drake and you can see that the folks who are black that were burdened with no choice and found a way to create a culture and create a space for themselves, but they had to take it, right? So I’m hoping the youth is also inspired by this.”

There comes a time for woke people to pause for “Smokin’ Hot” pepper pot and slow-cooked collards, and since you can’t get through the museum in one visit, the Sweet Home Cafe is a good place to stop. You ask Dalante if the kitchen can fix you a plate to go because black people hold ever in mind all of the ones who couldn’t make the trip, and you tear up at all the black faces that pass through your thoughts. And you notice actress Victoria Rowell, Drucilla from your “stories,” eating nearby.

Outside the culture gallery, where a video shows black people Lindy hopping, and dancing a jig, you spot a former colleague and hit a pop/lock move just because it feels good, and because you can. One floor down, security guard Roz Hubbard talks about how good it is to see everybody. How the young man with his father says he’ll be back two years from now. How all the celebrities speak.

Two men, Steve Watkins and Merald “Bubba” Knight Jr., walk up to ask directions to the cafe. My suit is up there on the fourth floor, Knight brags to Hubbard.

That’s “Bubba, from Gladys Knight and the Pips,” Watkins said, and you look into Knight’s face and immediately see the truth of it.

“What? My middle name is Gladys,” Hubbard says dramatically.

“You my sister! Commear,” says Knight, and he draws her in for a hug.

On the elevator heading down, you point out that Knight looks sharp in his crisp white Kangol. He says he saw another brother wearing the same white cap. “I said to him, ‘Kangol?’ And he said, ‘Can’t go wrong!’ ” Knight recalls, and doubles over with mirth.

Oh, my Lord, I think to myself. And I hear echoes of old black laughter. Watch out there now. And if you don’t get the reference, it’s all good, just catch up when you can.

Soon enough, we’ll be back in the world, where the myriad complexities of America await us. But right now, in this moment, I feel unburdened by the weight of translation. In this place, I’m just happy to see everybody. It’s another layer of being at our new spot on the National Mall, the blackest place in America.