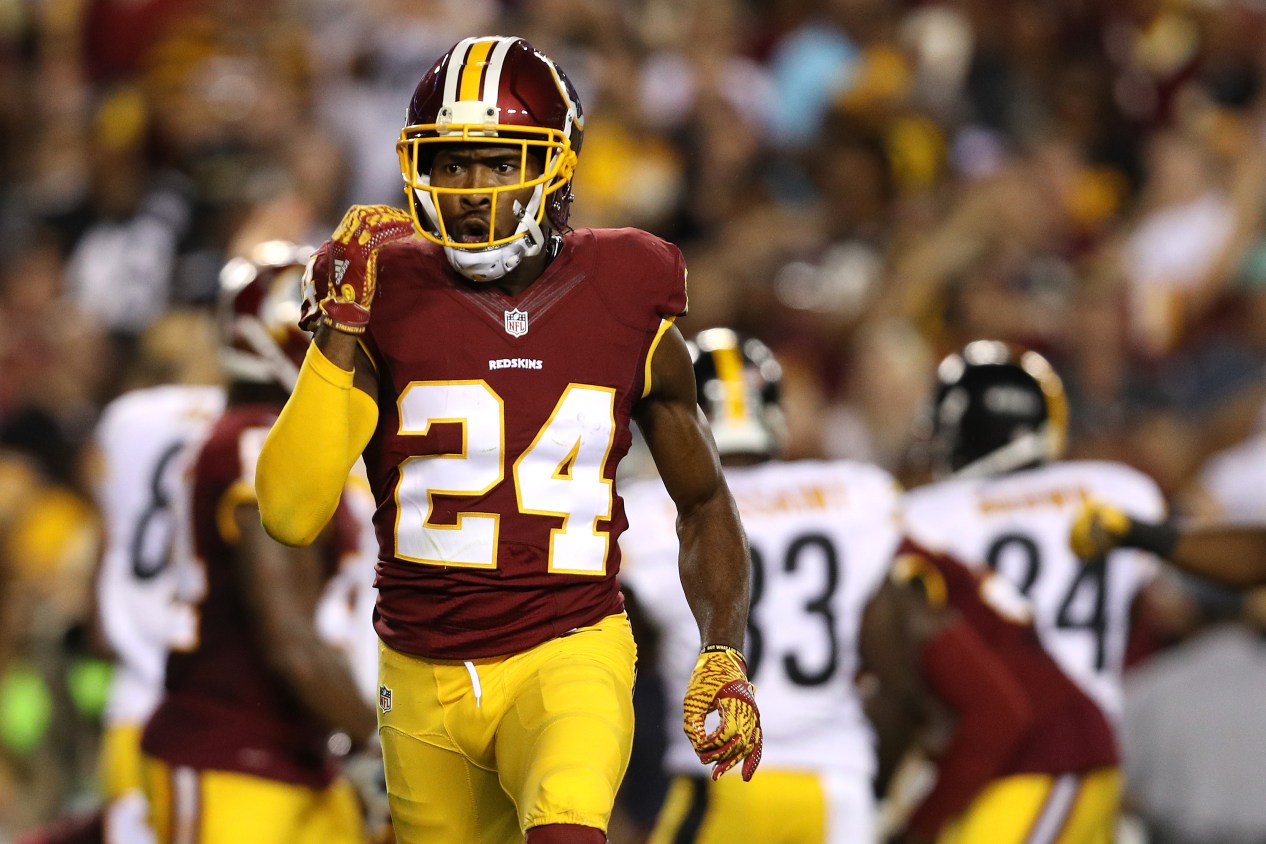 Defensive back Josh Norman #24 of the Washington Redskins acknowledges the crowd in the second quarter against the Pittsburgh Steelers at FedExField on September 12, 2016 in Landover, Maryland. Patrick Smith/Getty Images
NFL

So, how ’bout that Josh Norman?

Since the Redskins didn’t pit their best corner against the Steelers’ best receiver, we still don’t know

For a moment, let’s put aside the fact that Josh Norman is the NFL’s highest-paid cornerback. And to be fair, let’s also acknowledge that Washington Redskins defensive back Bashaud Breeland acquitted himself well in his first two seasons. That established, one question still lingers from late Monday night at FedEx Field after a season opener that brings to mind a switch and a woodshed: What in the heck were the Washington Redskins thinking?

Their apoplectic fans rightfully demanded answers after Norman rarely matched up against superstar wide receiver Antonio Brown, who dominated Breeland in the Pittsburgh Steelers’ 38-16 rout. Brown had eight catches for a game-high 126 yards. His two long touchdown receptions covered 29 and 26 yards, respectively, and occurred, you guessed it, with Breeland in coverage. Pittsburgh’s fans loved the show. They love to pack the Redskins’ stadium in Landover, Maryland, and wave those black-and-gold Terrible Towels, which they did often in celebration. Essentially, the Redskins’ game plan was akin to throwing in the towel. On social media, Redskins fans agreed. Passionately.

Norman took a different view. The outspoken player – in a recent ESPN The Magazine cover story, Norman excoriated several of the highest-profile people in the game – had every right to at least raise concerns about defensive coordinator Joe Barry’s questionable strategy. Norman, however, didn’t go there. Instead, he had nothing but love for his new fam.

“All the faith and trust in coach Joe B., man, [defensive backs] coach Perry Fewell … that’s why the guys brought me here. Faith in me to do my job,” Norman said. “I’m not questioning one thing [about] the game plan. Shoot. I’d have Bashaud do the same thing he did out there. The same game plan.

“We could have went with the same thing again. What if this? What if that? Nah, man. Ain’t none of that. I’ve got total, 110-percent faith in coach Joe B, everything he wants us to do. If you looking for something, you ain’t getting it from me. I ain’t got nothing.”

Being a good locker room guy is a smart move, especially in your first season on a new team. Also, there’s no guarantee Norman would have fared better than Breeland did on several passes. On the other hand, the Redskins owed it to themselves and their fans to find out what their No. 1 corner could do for a long stretch against the Steelers’ No. 1 receiver. Twice, Norman was isolated against Brown. Both times, Norman made strong plays to break up passes. Maybe Washington’s coaching staff didn’t notice.

Norman possesses off-the-charts coverage skills. His instincts are second to no other cornerback in the league. Last season, the guy was a first-team All-Pro coming off a season in which he scored two defensive touchdowns, tied for the most in the league, and ranked fifth with 15 pass breakups.

The Redskins were so eager to sign Norman that they rushed in after the Carolina Panthers surprisingly rescinded his franchise tag, putting $50 million guaranteed on the table. Wisely, Norman took it. And in Norman’s first game with the Redskins, their coaches put him on ice.

Any plan devised by Barry that lacked as its centerpiece Norman shadowing Brown the entire game is one that head coach Jay Gruden should have rejected. Just ball up the paper and toss it in the trash, because that’s where it belonged.

You don’t attach an A-lister to a project and then list someone else’s name on the marquee. During the beginning, middle and end of the opener, Norman should have been on Brown. After the debacle, Gruden warmed to the idea. “There could be merit to that [Norman mirroring opponents’ best receivers] later on down the road,” Gruden said.

What made the Redskins’ approach even more of a head-scratcher is that the Steelers were playing without their Nos. 2 and 3 wideouts. Martavis Bryant has been suspended for the season for violating the league’s substance-abuse policy. Markus Wheaton, who was next up at the position, missed Monday’s game because of a shoulder injury. Although the Steelers are deep at receiver, there’s no explanation for the Redskins having their second-best corner line up against arguably the NFL’s best receiver as much as they did. At least no good explanation. Pittsburgh quarterback Ben Roethlisberger and Brown terrorized Breeland while playing catch. “They just took us behind the woodshed today,” Norman said. “They gave us a good, old-fashioned butt-whooping.”

Much of what went wrong is on Barry. In his second season as Washington’s defensive play-caller, Barry isn’t a proponent of having one corner mirror a particular receiver. With so many moving parts on every play, coaches who think like Barry say adding another pre-snap element could result in busted coverages. Sometimes the move makes sense, though. Safety DeAngelo Hall knows it.

For most of his career, Hall, in his 14th season, was one of the NFL’s top play-making corners. Although the three-time Pro Bowler has total confidence in Breeland, Hall also understands why fans would have wanted Norman on Brown exclusively.

“I mean, I’ve done it for a long time,” Hall said. “That’s something, maybe, we’ll take into consideration.”

That’s just not the way Barry rolls. It’s also a fact that Barry hasn’t been a successful NFL coordinator. Under Barry in 2015, the Redskins’ defense ranked 28th in yards in the 32-team league. At Barry’s direction in 2007 and 2008, the Detroit Lions were last in the league both in yards and points. Those Lions teams were among the league’s least talented both seasons. But coaches are judged on results.

A team’s secondary is only as good as its front seven. In Carolina, Norman played behind multiple rock stars: Inside linebacker Luke Kuechly, outside linebacker Thomas Davis and defensive tackle Kawann Short also were selected as first-team all-pros last season. The Redskins aren’t in the same league. That’s on general manager Scot McCloughan.

McCloughan has failed to address glaring holes along the Redskins’ defensive line. However, he did make a splash in signing the best available free-agent corner, apparently believing Norman could mask the problems up front from the secondary. Well, perhaps McCloughan needs to tell Gruden and Barry how to best use Norman. Or someone should.