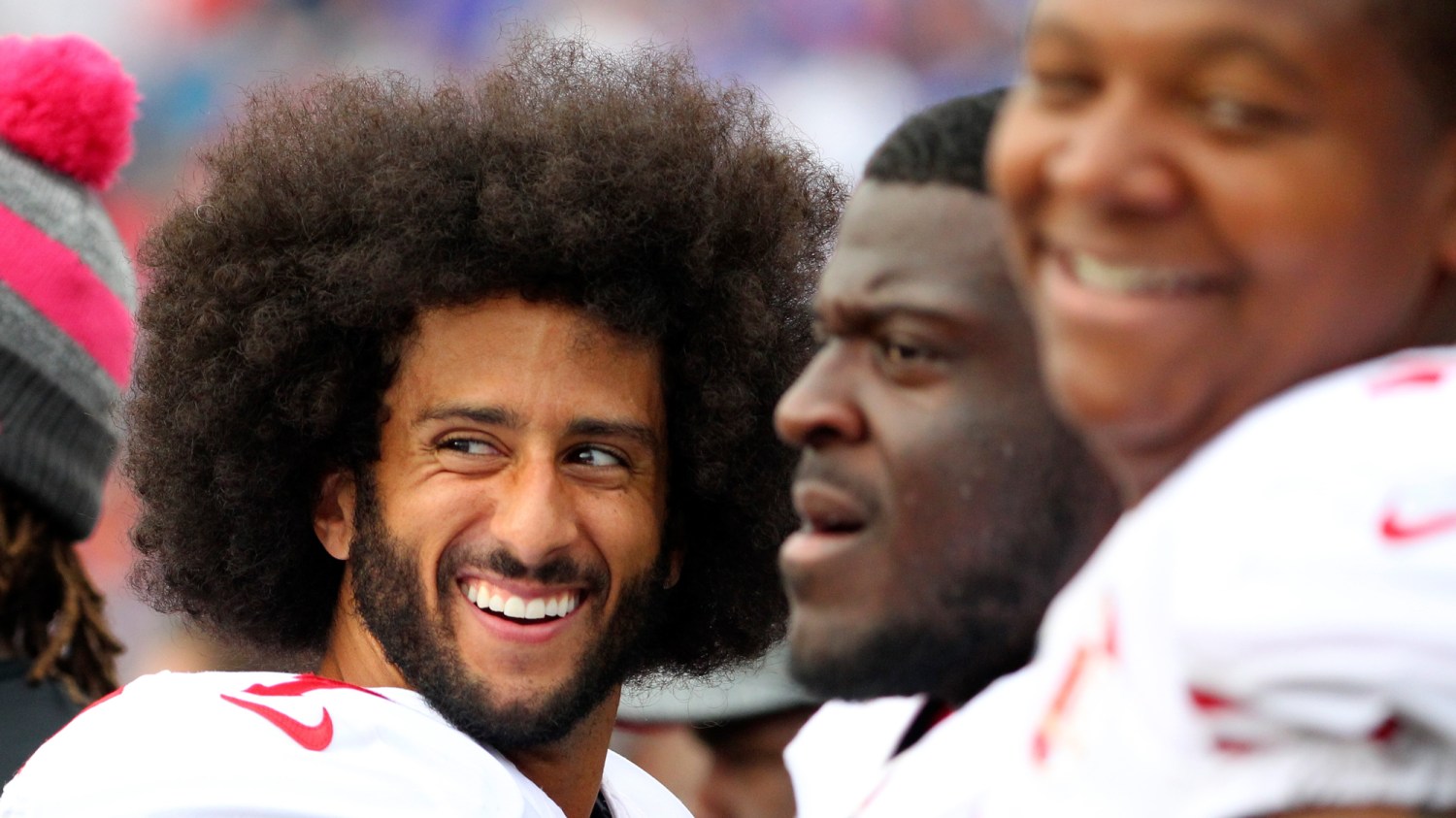 So how ’bout that Kaepernick?

The 49ers quarterback shows he’s not afraid to step out from behind center on the field and in his career, too

The news of the day was that Colin Kaepernick returned to the starting lineup. For a few hours Sunday afternoon, the woke San Francisco 49ers quarterback was again judged on his performance and his politics in an embarrassing loss to the Buffalo Bills. Perhaps with a few more reps to shake off the rust, Kaepernick will get his game as strong as his beliefs.

But take a look at the bigger picture: The most important development concerning Kaepernick happened a week before the Buffalo Bills dismantled the reeling 49ers, 45-16. When Kaepernick reportedly renegotiated his contract to allow him to become a free agent after the end of this season. And the Niners starting quarterback — who no longer stands during the U.S. national anthem in an effort to draw attention to the oppression of black people and people of color — should run as fast as he can from this hot mess of a franchise. The 49ers have fallen into such a state of disrepair, Pro Football Hall of Famers Joe Montana and Steve Young in their prime couldn’t stop this slide.

The Bills notched their fourth consecutive victory by utilizing a seemingly newfangled approach confounding the 49ers this season: They ran the football. Buffalo pummeled San Francisco’s defense — amassing 312 yards rushing and a whopping 7.1-yard average. Over the course of his 106-yard first half, running back LeSean “Shady” McCoy was just toying with 49ers tacklers. He would finish the game with 140 yards and three touchdowns on only 19 rushes. Considering his long-running beef with first-year San Francisco head coach Chip Kelly, who gave McCoy the boot out of town when they were both with the Philadelphia Eagles, you know dude was hyped about that.

Against McCoy and anyone else who carried the ball, the 49ers repeatedly took poor angles, failed to wrap up and generally looked as if they hadn’t been coached in the fundamentals of tackling. From the game’s opening minute until the last, the 49ers were consistently awful.

Not exactly inspiring words from leadership. Of course, at this point, what’s left for Kelly to say?

For the fifth straight week, a back has gained at least 100 yards against the 49ers. Not surprisingly, San Francisco has lost every game during that stretch after a season-opening victory over the Los Angeles Rams. That brings us back to Kaepernick.

As usually is the case with teams that change quarterbacks during the season, San Francisco was hoping for anything that could spark a sign of improvement, let alone a full-blown turnaround. After watching former starter Blaine Gabbert play like, well, Blaine Gabbert, the 49ers’ top decision-makers turned back to Kaepernick. If nothing else, they figured, Kaepernick would extend plays with his legs better than Gabbert.

But Kaepernick hasn’t started since Week 8 of last season. He underwent shoulder, knee and thumb surgeries in the offseason. He didn’t get first-team practice reps until last week. And on a windy day, he looked every bit like someone still taking baby steps.

Kaepernick completed only 13-of-29 passes for 187 yards. On a busted coverage, he linked up with wide receiver Torrey Smith for a 53-yard catch-and-run touchdown. Kaepernick also led the 49ers in rushing with 66 yards and an 8.3-yard average.

The six-year veteran ripped off a long run of 29 yards. He displayed the flashes of elusiveness that once made him one of the league’s most productive dual-threat passers during the 2013 and 2014 seasons – in the third quarter, Kaepernick avoided a safety by breaking free from Buffalo linebacker Jerry Hughes and running 10 yards to pick up a first down. Under the circumstances, Kaepernick played pretty much as well as the 49ers could have envisioned.

“I thought he was OK,” Kelly said. “He extended some drives. Keeping plays alive with his legs … obviously, he did a good job. Pretty good situation in terms of him running the football well.”

For his part, Kaepernick had no illusions about delivering an MVP-type performance. He got his job back. That was a start.

“Great to be on the field again,” Kaepernick said. “Having that opportunity meant a lot.”

It has been a long, hard road. Ever since Kaepernick risked his career to stand with those who believe black lives should matter, he has been the target of intense venom. And that was no more evident than in Orchard Park, New York, on Sunday.

Dressed like he’d come straight from a protest march, Kaepernick arrived at New Era Field dripping in black pride. His signature Afro was picked all the way out. Under a black blazer, he wore a shirt adorned with the image of Muhammad Ali. Kaepernick finished the in-your-face outfit with black slacks and a pair of black-and-white Air Jordan high-tops. The Ali shirt brought it all together, Kaepernick said.

“He was someone who fought a very similar fight and was trying to do what is right,” Kaepernick said of Ali. “For me to have someone like that come before me, that is huge.

“He is someone who helped pave the way for this to happen. What he did, and what he stood for, people remember him more for that than they do as a boxer. I have to try to carry that on. Fight that same fight until we accomplish our goal.”

Kaepernick was under siege all day.

Just off of stadium property, vendors sold anti-Kaepernick shirts. In one image depicted on a shirt, Kaepernick was in the crosshairs of a rifle scope, TheMMQB.com reported.

“Like I said from the beginning: I knew the consequences of what could come from this,” he said. “I was prepared for that. … The message carries weight because people realize what’s happening and that it is something that needs to be addressed.

Inside the stadium, Kaepernick was booed vociferously, and fans directed chants of “U-S-A, U-S-A” at him, presumably because they disagree with his position.

“I don’t understand what’s un-American about fighting for liberty and justice for everybody, for the equality this country says it stands for,” Kaepernick said. “To me, I see it as very patriotic and American to uphold the United States to the standards that it says it lives by.”

“If you’re on social media at all — Facebook, Twitter, whatever — and have seen these videos [of encounters between African-Americans and the police], you can’t help but think that there’s something wrong and there are issues in social justice,” said Alexander, who sacked Kaepernick once and leads the NFL with eight sacks.

“Often, we forget about [the incidents] until the next bad thing happens – but people aren’t forgetting now. He has put the spotlight on it and kept the conversation going.”

It’s unclear whether Kaepernick will keep going as the 49ers’ starter. “We’ll see,” Kelly said, cryptically. The thing is, no one knows how much longer San Francisco’s current management regime will remain in place, either.

After his tumultuous ride in the NFL, no one could blame Kelly if he ran back to the college ranks. Then there’s 49ers general manager Trent Baalke. Maybe Baalke didn’t construct San Francisco’s defensive roster with his eyes closed. But it sure seems like it.

Clearly, another round of big changes could be on the horizon for the 49ers. Kaepernick should make sure he’s one of the first through the door. After all, Kaepernick has already shown he’s not afraid to step out on his own.