Statue honoring Althea Gibson unveiled at the US Open

‘She’s our Jackie Robinson of tennis’

Just before a sculpture honoring Althea Gibson was unveiled Monday at the start of the 2019 US Open, former tennis pro Leslie Allen recalled a trip she took to Africa with Gibson, the first African American to win a tennis Grand Slam event. At one point, the two were talking and Gibson pointed toward a door.

“ ‘My job was to bust down, to break down, that door so that you and the next generation could walk right on through. And each one of us would have more than the next,’ ” Gibson said to Allen.

That generations were able to walk through that barrier — players such as Allen, Zina Garrison, Sloane Stephens, and Venus and Serena Williams — was made possible by Gibson, who broke the color barrier in international tennis on the way to winning 11 Grand Slam (five singles) events during her professional career, which began in 1941 in the American Tennis Association (the oldest African American sports organization in America) before intense lobbying let her break the color barrier and play at the U.S. National Championships (now the US Open) in 1950. 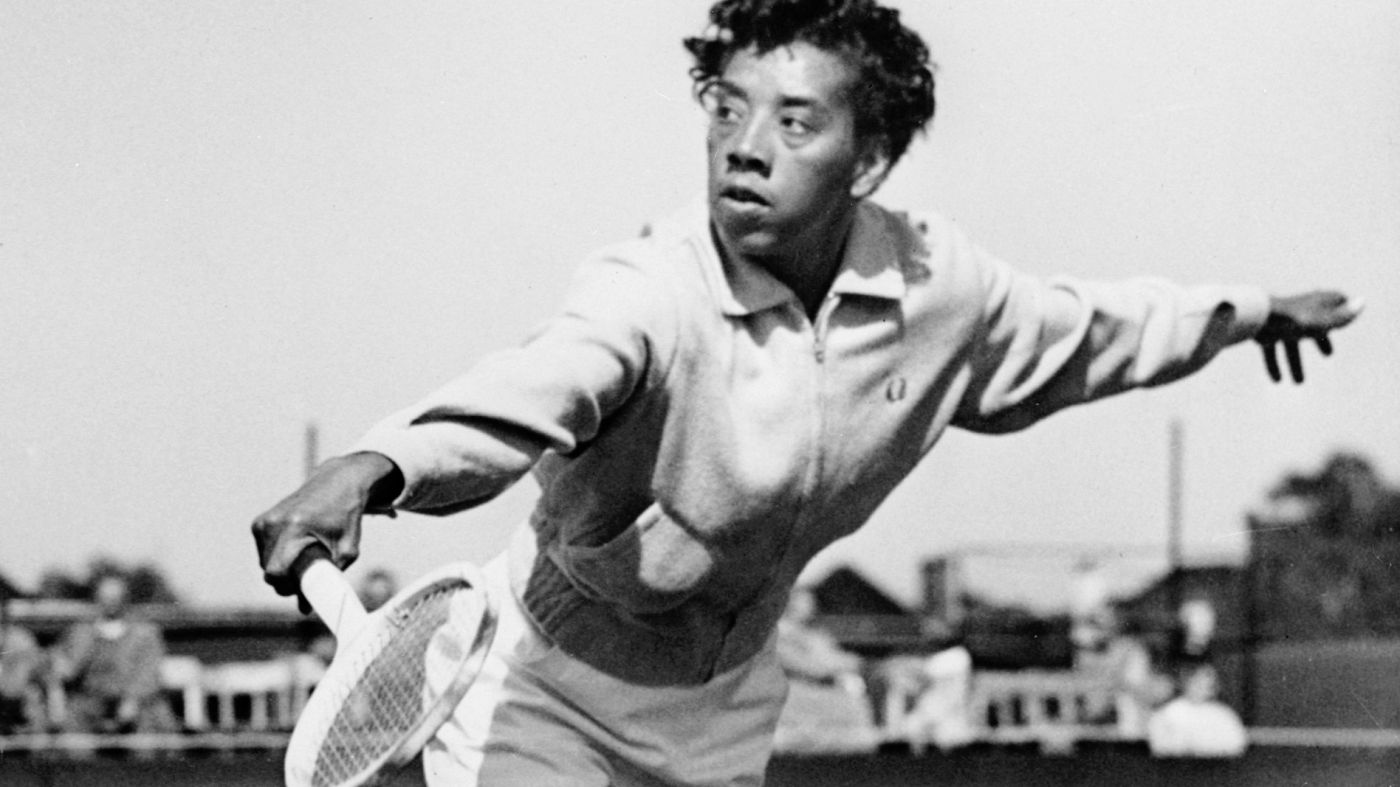 At a complex that’s named after Billie Jean King, and includes stadiums named after another pioneer (Arthur Ashe) and a jazz legend (Louis Armstrong), it’s rather perplexing that Gibson, who was once feted with a ticker tape parade down New York’s Canyon of Heroes after winning Wimbledon in 1957, wasn’t honored before her death in 2003.

The unveiling of the gorgeous, 18-ton granite Althea Gibson statue @usta @BillieJeanKing National Tennis Center that took years to get done! But it’s here and a credit to the ‘Jackie Robinson of Tennis’ who broke through the color barrier in tennis. @usopen @katadams68 @WFAN660 pic.twitter.com/FdesxpxDuO

The sculpture — a penetrating image of Gibson’s head emerging from a granite block, with five blocks on the side — sits on the southeast side of Arthur Ashe Stadium. The image of Gibson bursting from the blocks is symbolic, as is one of her shoulders being exposed — it’s the shoulder that “everybody since has stood on,” said its sculptor, Eric Goulder.

The artwork weighs a total of 18 tons. It was transported via an ocean freighter to the United States from Italy.

King, who was so inspired by the tennis pioneer that she used to sleep with Gibson’s 1958 biography I Always Wanted to Be Somebody, said she had been pushing for recognition for Gibson on the grounds of the US Open since the 1970s. “Without a doubt, Althea was our Jackie Robinson,” King said.

Incredibly, the final push to have Gibson, who was also the first black woman to play on the professional golf tour, recognized at the US Open came from a North Carolina youth tennis program, One Love Tennis, which is run by a friend of the late Gibson.

Two years ago, that friend, Lenny Simpson, had his tennis students watch a documentary about Gibson. Afterward, the group discussed ways that Gibson should be honored, with Simpson explaining that something needed to be done “even if it’s in the form of a hot dog stand.” That “hot dog stand” line was included in one of the letters the students sent to Katrina Adams, who at the time was the president of the USTA.

“They lit a fire under me,” Adams said Monday. “That really touched me and got me going.”

Several of those letter writers were among the several hundred people on hand to watch the ceremony honoring Gibson. “We wrote the letters because we felt like she deserved it, but we didn’t know what would happen,” said 14-year-old Jal’leia Jeffries, one of the 40 members of One Love who made the 10-hour bus ride to New York for the ceremony. “I was excited that our letters actually did something.”

Aaliyah Jones, 14, who had seen the black cloth covering the sculpture as the group visited the grounds of the US Open over the weekend, was excited to see the final product. “It’s just nice knowing that our work paid off and that Althea Gibson got a statue that she rightfully deserved,” she said. “For me to have played a part of this, it makes me feel like I can accomplish anything I put my mind to.”

Simpson, the head of the program, said he felt weak in the knees when he approached the sculpture. “I got goose bumps, and the hair on my arm started to raise up,” Simpson said. “When I finally settled down, I just stood in front of it and said to myself, ‘Yes, the day has finally arrived.’ ”

There are reasons that a venue hasn’t been named after Gibson, and why a stadium on the grounds is named after a jazz artist. The USTA has a policy that blocks the naming of another court after a player and also has an agreement with New York City barring the renaming of Louis Armstrong Stadium (which was inherited from the 1964 World’s Fair, where it was originally built as the Singer Bowl and renamed for the jazz artist in 1973).

Whether those reasons for not honoring Gibson were obstacles or excuses, she has finally received her proper recognition on the grounds of the US Open.

One day after what would have been her 92nd birthday, and on Women’s Equality Day, a statue of Althea Gibson will be unveiled tomorrow at the #USOpen. Getting to know her was a privilege. I am grateful to her always for showing me what No. 1 looked like. https://t.co/3ZOu7vgTGY

“It’s great that we finally have something to honor her here,” King said. “Her story told me what a true champion looked like, and to never give up. She opened up the door for all of us, enlightening all of us and inspiring all of us.”