Step into the future: NBA talent redefines the meaning of traveling

The moves look crazy, awkward or downright illegal. On their way to the basket, NBA players take what looks like three or four steps as they C-walk around defenders. We’ve all seen the highlights. That’s gotta be a travel, right?

Right — and wrong. Some of these moves are travels. But the players are too large, fast and skilled for the refs to see it — so they’re not travels. Which leads to more uncalled travels. Which is changing the very nature of the game.

Confused? You’re not alone. Let’s take it step by Eurostep:

STEP ONE: REFS CAN’T CALL WHAT THEY CAN’T SEE

This new NBA generation features players who are so fast, so talented — and, in the person of Giannis Antetokounmpo, so Greek Freaking long — referees sometimes can’t tell whether they are taking an extra step. In other words, refs can’t say for sure in real time that it’s a violation, so they swallow their whistles.

“The NBA has always had a little bit of leniency on that particular call,” two-time MVP Stephen Curry told The Undefeated.

“It’s a little inconsistent because guys are really superathletic, quick, fast. It’s hard to watch everything,” said Curry, whose handle is so slick he got away with a double dribble during this viral bucket on Cleveland Cavalier LeBron James during last season’s NBA Finals.

Take this drive by Antetokounmpo:

At first glance, it looks like an obvious three-step travel. Nobody should be able to pick up his dribble at the 3-point line, slalom around two defenders and hammer down a dunk. But Antetokounmpo is 6-11 with a 7-3 wingspan and the speed and agility of a cheetah. His move here falls under the “gather” rule, which the NBA either clarified or changed (depending on your opinion) in 2009. Once the player has “gathered” the ball, meaning he’s holding it in both hands and can no longer dribble, he is allowed two more steps.

The question is, exactly when did Antetokounmpo pick up his dribble?

“It’s supposed to be a real simple concept: A player has ended his dribble, has control of the ball and is driving toward the basket going for a shot,” said Joe Borgia, the NBA’s senior vice president of referee & replay operations and one of the league’s foremost experts on the rules.

“Knowing that rule is simple,” Borgia said. “Now try to see that on a player running full speed with a defender or two next to him or behind him, you’re looking for a push in the back or a reach-in, and you’re seeing not a 6-foot player but this 7-foot player has gathered the ball and he’s got a 45-inch leg and his foot is 4 feet behind where he has the ball.

“OK, which foot was on the floor when he brought that ball in? That’s what we deal with.”

“That’s the one, as guys’ games evolve and they try new moves and stuff, [refs] gotta kind of keep up with those advances,” Curry said. “The ‘gather’ is a very loose term.”

Especially when combined with the Eurostep. Introduced to the NBA in the 1990s by Lithuanian guard Sarunas Marciulionis, popularized by the Argentinian legend Manu Ginobili, the zigzag maneuver after the player picks up the ball sows widespread confusion among fans, refs and players alike.

“Live action is tough, guys are doing the Eurosteps, that’s when it gets dicey. You’re probably Eurostepping in traffic. Referees are looking at a lot,” Carter said.

Trainer and filmmaker Devin Williams, creator of the ten000hours video series, has worked with numerous NBA players and watched countless hours of film. He tweeted me a comparison of the Giannis Euro-dunk with slams by LeBron James and Russell Westbrook, arguing that they were all legal:

This is also a travel by the rules that you have set. If I slowed it down everyone would think it’s a travel I guess ..exact same steps Giannis took but Giannis just went to the side. (Yes he did travel when he first got the ball) pic.twitter.com/vOQPIyIlwH

Williams said he used to think players were traveling until he began studying their moves in slow motion. “These dudes are getting taller and longer, their strides are longer, they’re just covering more distance,” Williams told me.

“You see Kyrie [Irving] or [James] Harden pull out something, these guys are so good, it challenges the way we think about basketball,” Williams said. “Our natural reaction is travel, carry, something. But they’re just out of this world.”

As travels go uncalled because of the speed, size and skill of the players, these violations get normalized — just like Allen Iverson’s crossovers stretched the limits of the carry rule and changed how referees let players handle the ball.

As Iverson’s influence spread and more dribblers’ hands inched from the top of the ball down the side, more ball handlers got away with illegally touching the bottom of the rock. Today, stars such as Antetokounmpo, Irving and Harden are inventing new techniques to get their shots off. These dudes are running right on the edge of legal. Sometimes, when they take that extra quarter- or half-step, refs swallow their whistles because they have seen them make similar legal plays before.

That may be what happened on this Harden stepback that Warriors coach Steve Kerr called “an embarrassment” in a tweet he thought he was sending as a direct message. “I think the league is so happy with all the scoring that it doesn’t want to enforce stuff like that,” Kerr wrote, voicing a not-uncommon opinion.

Kiki Vandeweghe, the NBA’s executive vice president for basketball operations, begs to differ. “The rules as far as travels haven’t changed,” said Vandeweghe, who was a prolific scorer in the 1980s. “The players are constantly pushing the envelope and reimagining the game. It’s fascinating to watch. Every night I see something and go, ‘Wow, I didn’t think that was possible. Let me rewind that and see how that guy did that.’ ”

Which brings us back to that Greek Freak move.

I asked Borgia whether it was a travel. He said he had to slow it down using frame-by-frame video technology and look at it from a variety of angles.

“In my opinion, he really didn’t have control until after that left foot was just down,” Borgia said.

Which means it was not a travel.

“But you could still make arguments one way or another. Flip a coin,” Borgia continued, noting that he was watching the play a 30th of a second at a time.

Which means it could have been a travel. Even though it wasn’t. 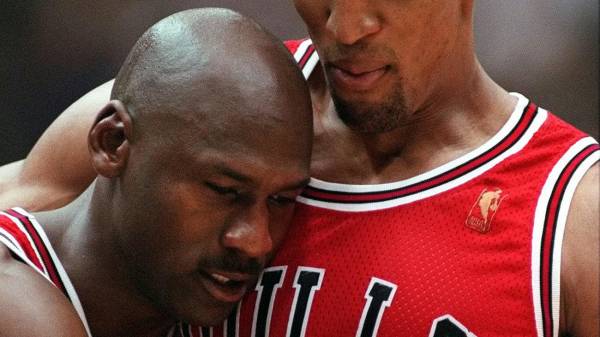 Which means these new players are so good, they are changing the very essence of basketball.

“The game done changed,” Cutty tells Slim in an iconic scene from The Wire.

“The game the same,” responds Slim. “It just got more fierce.”