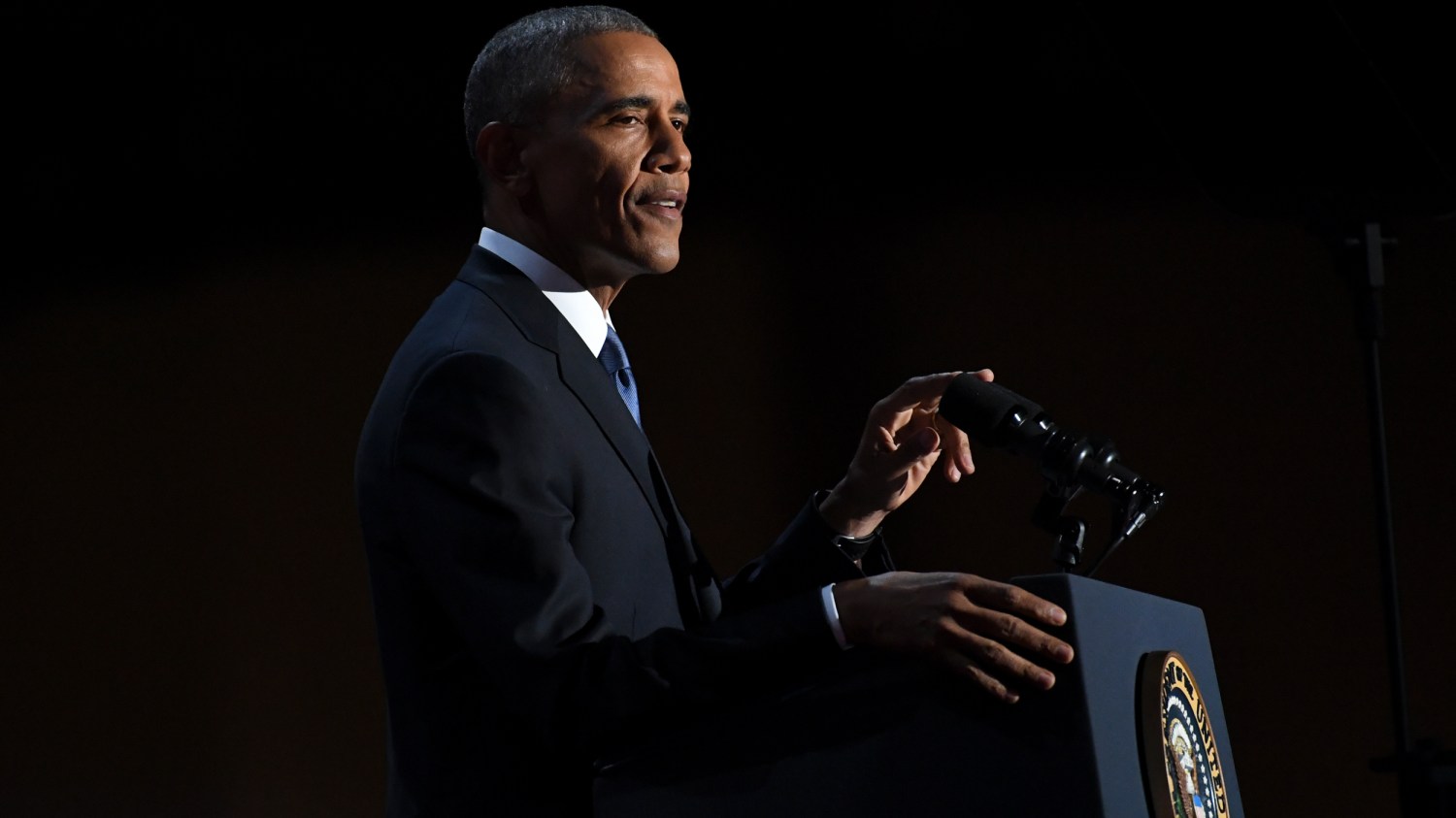 President Barack Obama delivers his farewell address on January 11, 2017 at the McCormick Place in Chicago, Illinois. President Obama returned home to Chicago to deliver his final address to the country before stepping aside for President-Elect Donald Trump. Brent Lewis/The Undefeated

‘We’re all in this together,’ he tells a nation wrestling with racial and economic divisions

Michelle Obama said it best when describing how she and President Barack Obama responded to the insults and disrespect they encountered over the past eight years.

That instinct to take the high road was in full effect during the president’s farewell address to the nation Tuesday night. Faced with the impending presidency of Donald Trump, who spent years fanning ridiculous questions about whether Obama was a natural-born American, and whose angry campaign stood as repudiation to many of Obama’s signature achievements and much of his legacy, the president responded with a gracious history lesson.

“For every two steps forward, it often feels we take one step back. But the long sweep of America has been defined by forward motion, a constant widening of our founding creed to embrace all, and not just some,” Obama told a national television audience and the thousands of cheering supporters who packed McCormick Place, a huge convention center in his hometown of Chicago.

“In 10 days, the world will witness a hallmark of our democracy: the peaceful transfer of power from one freely elected president to the next,” he said. “I committed to President-elect Trump that my administration would ensure the smoothest possible transition, just as President Bush did for me.”

Despite deep concern among many of his supporters about what Trump will do as president, Obama chose optimism, which in its own way poses a challenge to his successor. He talked about America as an imperfect nation that has gotten better, even if it has a long way to go. He talked about the awesome responsibility of citizenship — the need to organize, participate and vote. And he talked about the perils of living stuck within separate realities and indulging our resentments without really considering the merits of those who live a different reality and connect with different narratives.

For whites, he said, that means acknowledging the continuing effects of slavery and Jim Crow, and understanding that when people protest, “they’re not demanding special treatment, but equal treatment.”

For blacks, he said, it means acknowledging other people’s struggles, even those of the “middle-aged white guy” who may seem like he has all the advantages, but is actually dealing with a world upended by “economic and cultural and technological change.”

In many ways, Obama’s speech was in keeping with the long line of presidential farewell addresses, the first of which was delivered by George Washington. In recent times, most have been delivered from the White House. Bill Clinton used his to extol the virtues of fiscal responsibility. George W. Bush spoke about the virtues of his controversial war on terrorism, telling Americans that while most of them had eventually moved on from the 9/11 terror attacks, he did not have that luxury.

But he also admitted that persistent economic and racial divides are having a corrosive effect on the nation.

He noted that his election as the first black president ignited talk of a postracial America, an aspiration that he dismissed as perhaps well-intentioned but definitely unrealistic. After a string of police shootings of unarmed black men and disturbances on the streets of Ferguson, Missouri, and Baltimore, polls show that Americans are more pessimistic about race relations now than they were when Obama took office.

Still, Obama insisted, in a broader sense race relations are improving “no matter what some folks say. You can see it not just in statistics. You see it in the attitudes of young Americans across the political spectrum.”

Nevertheless, racial progress is not inevitable, he said. With Trump no doubt in mind, Obama warned that it is dangerous to frame economic issues in a zero-sum way, as undeserving minorities snatching opportunity from a hardworking white working class.

Government has to work hard to enforce anti-discrimination laws, he said, even as Democrats question whether those laws will be a priority in a Trump administration. Hours before Obama’s speech, the U.S. Senate began confirmation hearings for attorney general candidate Jeff Sessions, a Republican senator from Alabama.

The issues raised in the opening day of Sessions’ hearing spoke to the jarring transition about to take place in Washington. In the past, former colleagues testified that Sessions called the NAACP a racist organization, used the N-word, and joked about the Ku Klux Klan being “OK,” accusations that sank his nomination as a federal court judge in 1986. But Tuesday he praised the civil rights group, condemned the testimony linking him to racial slurs as grossly inaccurate, and voiced strong support for voting rights. That is likely enough to earn him confirmation.

Obama’s farewell speech was delivered just a few miles from his home in Hyde Park, the South Side Chicago neighborhood where he started his history-making political career just two decades ago.

Throughout the evening, there were echoes of Obama’s keynote address at the 2004 Democratic National Convention. That night, he vaulted to national prominence with his declaration that Americans have more in common than their politics would indicate.

“There’s not a black America and white America and Latino America and Asian America,” he said then. “There’s the United States of America.”

Last night, as he prepared to leave office, Obama was still urging Americans to come together. “Understand, democracy does not require uniformity,” Obama said. “[But] democracy does require a basic sense of solidarity. The idea that, for all our outward differences, we’re all in this together, that we rise and fall as one.”