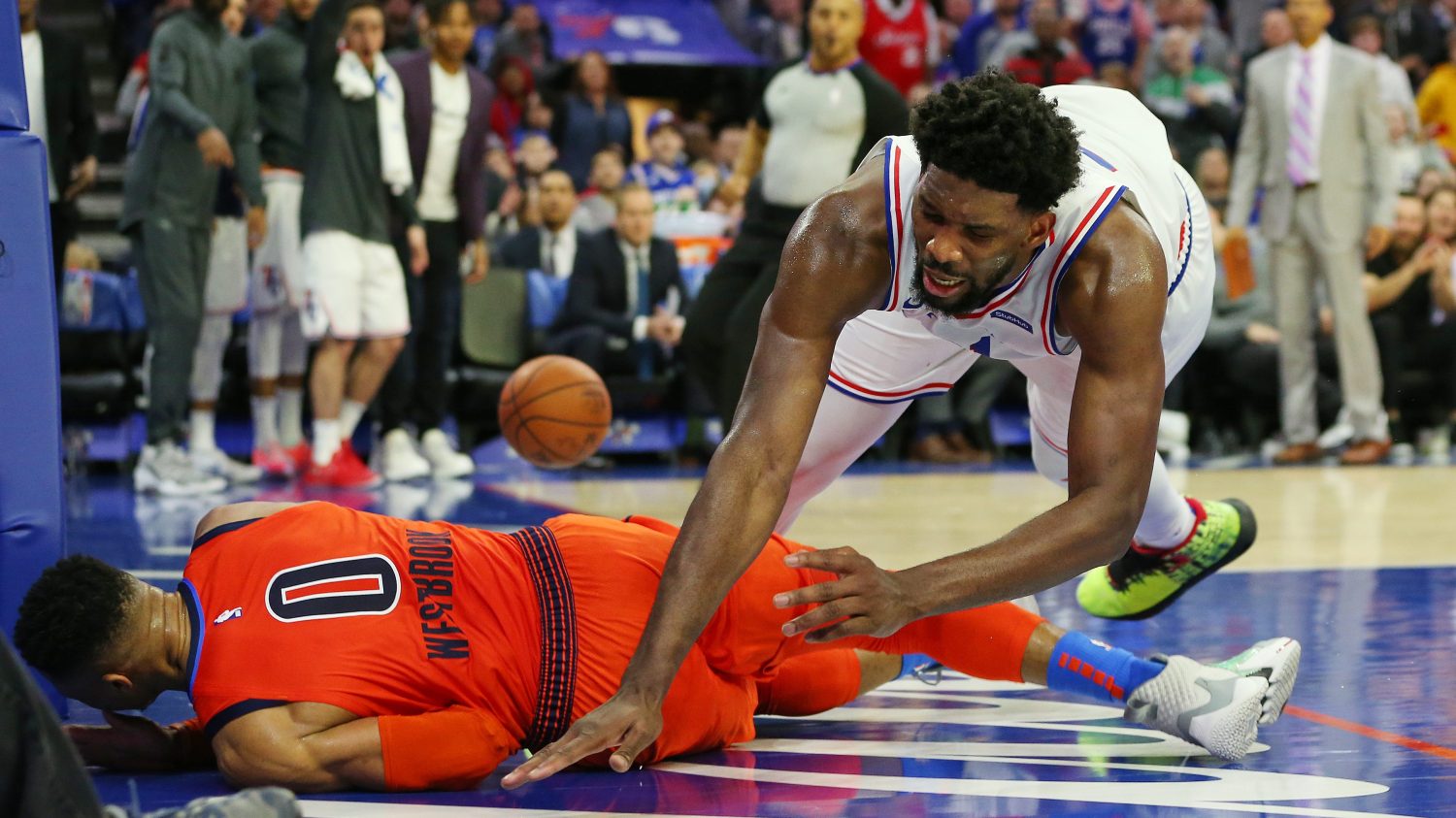 Joel Embiid (right) of the Philadelphia 76ers fouls Russell Westbrook of the Oklahoma City Thunder during the second half of a game at Wells Fargo Center on Jan. 19 in Philadelphia. Rich Schultz/Getty Images
2019 NBA All-Star Game

Will Quavo be Celebrity Game MVP? Will Ric Flair be courtside?

Professional sports’ premier soap opera is the NBA, and it invades Charlotte, North Carolina, this weekend for its 68th All-Star Game. But narrowing things to just the game is a disservice to the infinite dramatic possibilities of the weekend: Thursday through Sunday is an amalgamation of the NBA and pop culture so thorough that no other major American sports league could ever hope to measure up. What makes the NBA the melodramatic provocateur it is are the dramas. Some are obvious. Some aren’t. Some are, at best, are truly just pipe dreams. The following eight stories could spice up an already very hot weekend.

One: The All-Star method to LeBron’s All-Star madness

For LeBron James, this year’s All-Star draft was a riveting moment in a career filled with them. As fate, and Giannis Antetokounmpo’s draft strategy would have it, James’ gang is chock-full of soon-to-be free agents — and Anthony Davis, who, unless you’ve been living under a rock the last two weeks or so, you’ve heard has requested a trade — preferably to Los Angeles. While the Lakers came up short in the Davis sweepstakes, Los Angeles, and in particular James and agent Rich Paul, received backlash for what many, including LaVar Ball, dubbed as destroying whatever chemistry the Lakers had left. An improbable Rajon Rondo game-winner in Boston has temporarily quelled critics, but a 23-point dump trucking in Philly brought L.A. back to earth and staring in the face of what will be a race to eighth after the All Star break — if they hope to make the playoffs. So best believe James is using All-Star Weekend for business far beyond just the next few weeks of this season. One would be safe to bet a lot of general managers around the league are none too happy about James’ public chess moves.

Bonus: Just like Dwyane Wade, we’re all looking forward to that final lob he tosses up to James. A fitting swan song to one of the game’s all-time great friendships.

Two: Westbrook and Embiid: reunited — and it doesn’t feel so good

By far the funniest moment of the entire All-Star draft was the trade that sent Russell Westbrook to Team Giannis and Ben Simmons to Team LeBron. On the surface, it’s James getting his fellow Klutch brethren in Simmons. But the trade really matters for one reason — and one reason only. Westbrook and Joel Embiid, two of the NBA’s most beloved personalities, are now forced to be teammates.

But, Westbrook and Embiid aren’t fond of each other. At all. The drama began in December 2017 during a triple overtime instant classic between the Oklahoma City Thunder and Philadelphia 76ers. When the Sixers and Thunder squared off, Embiid waved goodbye to Steven Adams and Westbrook — after each fouled out. Oklahoma City ultimately won, leaving Westbrook to return the favor by waving at Embiid. Fast-forward to last month: In another Thunder win, Embiid landed on Westbrook following a blocked shot attempt. Embiid said it wasn’t on purpose. Westbrook believed otherwise. When asked if the two were cool off the court, Westbrook kept it funky. “F— no.” When asked what the issue between the two was, Embiid’s was sarcastic. “I don’t why he was so mad. I have no idea,” the Sixers superstar said. “But he’s always in his feelings, so I have no idea.” Seeing these two on the court at the same time should be absolute comedy. Will they play nice? Or will they freeze each other out? We won’t have to wait long to see them square off again as opponents, though. The Sixers travel to Oklahoma City on Feb. 28, where they hope to get a win versus the Thunder for the first time in 11 years.

To be the man, you gotta [honor the man at All-Star Weekend]…

OK, so that’s not exactly how the quote goes, but the truth remains the same. Of all the celebrities linked to Charlotte, there is but one who sits at the mountaintop. In a perfect world, Richard Morgan Fliehr, known to the world as Ric Flair, would be front and center at All-Star Weekend festivities. Flair’s wild life has been documented most recently with the critically acclaimed 30 for 30 Nature Boy. There will be many black music stars and fans in town for All-Star, most notably Meek Mill and J. Cole, who are headlining the official halftime show, and hip-hop loves Flair. Think 2012’s “We Ball” with Dom Kennedy and Kendrick Lamar. Think of 2018’s Offset, 21 Savage and Metro Boomin’s “Ric Flair Drip” the video that actually starred the former world champion. There’s a possibility Offset could be in town — Charlotte’s just a stone’s throw from Atlanta — and a reunion of sorts could take place. Nevertheless, Flair is a prime candidate for unofficial All-Star Weekend ambassador. Hope he’ll rock a “Free 21 Savage” shirt.

There’s also this: So much of Flair’s DNA is visible in current NBA All-Stars. James’ obsession for the dramatic is as must-see-TV as Flair. Stephen Curry and Klay Thompson’s threat from 3 is as crippling as Flair’s figure-four leg-lock. Westbrook’s fashion sense — need more be said? Also Flair is an undeniable fan favorite on a lifetime victory lap akin to Dwayne Wade and Dirk Nowitzki. Charlotte shouldn’t just want Flair courtside for Sunday’s game. Charlotte needs Flair courtside for Sunday’s game.

Quavo, reigning Celebrity Game MVP, looks to join Terrell Owens and Kevin Hart as the only players to be named most valuable more than once. Hart, like Young Jeezy and trapping, won it four years in a row. Take away the actual professional basketball players (Ray Allen, A’ja Wilson, Jay Williams), and look at this year’s rosters. Famous Los has already set his sights on the crown, but Quavo will again be the best hooper on the court. Huncho’s silky lefty game is only enhanced by his ability to finish at the rim and get to the free throw line at will — a la James Harden. Also: former Carolina Panthers/future Hall of Fame wide receiver (and one of the all-time great trash talkers in any sport) Steve Smith is on the opposing squad. A Smith-Quavo back-and-forth could be the closest iteration of Harden vs. Draymond Green at All-Star.

The two-time MVP will be a huge part in this weekend’s festivities given his deep and direct ties to the Queen City. His father, Dell, was a sharpshooter for the Charlotte Hornets for 10 seasons. And while Stephen Curry was born in Akron, Ohio (making it one of the most unexpected birthplaces of basketball royalty), Charlotte is where Curry grew up. He attended high school in Charlotte. And because no big-time schools thought much of him, Curry attended Davidson College, about 30 minutes away from downtown Charlotte — and put the school on the basketball map with unparalleled March Madness performances a decade ago. He returns to the city he calls home as the greatest shooter of all time, nearly a surefire lock to obliterate Allen’s all-time 3-point record and future Hall of Famer with three championships (and counting) to his name. Curry and younger brother Seth are both in the 3-point contest, and Curry’s presence in Sunday’s big game has the running narrative of MVP.

Six: Bombs Over Charlotte: A 3-point contest for the ages

There’s reigning champion Devin Booker. There are the aforementioned Curry brothers. Damian Lillard is made for moments like these. Buddy Hield, Joe Harris and Danny Green can all catch fire at a moment’s notice. Khris Middleton, who almost assuredly will have teammate Giannis Antetokounmpo courtside cheering him on. All-Star starter Kemba Walker has home court advantage. And there wouldn’t be an angry person in the world if Nowitzki walked away with the crown. The point being is this: There is no wrong selection here. Just enjoy the light show.

Michael Jordan turns 56 on Feb. 17, the day of the All-Star Game, and expect the greatest to ever do it to be treated like the royalty he is all weekend long. Jordan’s been waiting for this weekend since 2017, when Charlotte was originally supposed to host the midseason pilgrimage, but due to the discriminatory HB2, known as the “bathroom bill,” Charlotte’s look was postponed. But this year? Here are three Jordan dream scenarios in no particular order:

For anyone not familiar with All-Star Weekend, it’s a continuous barrage of parties, sponsored events and open bars. There is, of course, a vital need for music at these events. And if there’s one song most likely to become the unofficial anthem of the weekend, it’s Meek Mill and Drake’s “Going Bad” which officially dropped last week. Sitting at No. 15 on the Billboard Hot 100 as of Feb. 9, don’t be surprised if it jumps a few slots with an expected All-Star push. Meek is of course one of the two headliners for Sunday’s All-Star Game, along with home state titan J. Cole. Meek will also serve as the MC of pregame introductions with his and Drake’s hit likely playing some role in the moment. It’s a nice setup too, for the Central Intercollegiate Athletic Association (CIAA), the nation’s oldest historically black college conference. The organization has held its annual basketball tournament in the Queen City since 2004. Because of its residency in Charlotte (which ends next year and is headed to Baltimore in 2021), the city is an annual mecca for celebrities such as 21 Savage, Cardi B, Odell Beckham Jr., Rick Ross, Bria Myles, Lil Wayne, DC Young Fly and more. Last year’s CIAA tournament netted north of $50 million, according to the Charlotte Regional Visitors Authority. This year’s tournament kicks off Feb. 26.