From ‘Vice’ to ‘Vice Nights’ and now ‘Sunset Vice,’ Miami has the NBA’s best looks — and it’s not even close

At the beginning of the year, while still playing with LeBron James and the Cleveland Cavaliers, Dwyane Wade couldn’t help but marvel at the sight of his former team’s new threads.

The Miami Heat brought “Vice” to the NBA, as part of Nike’s City Edition series of uniforms, designed and implemented by all 30 teams in the league. The primarily white combination, accented in blue gale and laser fuchsia, featured “Miami” in script across the chest on the jersey, using the same font and design of the sign that hung on the franchise’s first venue, Miami Arena, beginning in 1988, the year the team was founded. A complete departure from the Heat’s traditional colors of red, black and yellow, “Vice” channeled South Beach swag at its finest and sparked a cultural phenomenon across the league through the storytelling of the team’s expansive campaign surrounding the uniform.

“When I saw the uniforms, I was a fan of them, as was everyone in the league,” Wade told The Undefeated. “In the NBA, there’s a cool factor about jerseys, and it was one of the top jerseys everyone wanted to get their hands on.”

Via trade two weeks after the “Vice” uniform debuted on Jan. 23, Cleveland sent Wade back to Miami — where he’d previously spent 13 seasons and won three championships after the team selected him with the No. 5 overall pick in the 2003 NBA draft. Before his first game back with the Heat, a “Vice” jersey awaited in his locker, with “Wade” stitched above the No. 3.

“It was cool to get an opportunity … to put it on,” Wade said. “For me to come back home for that first game and us to wear those jerseys, I thought it made me look cooler. I was happy about that.” Wearing the “Vice” uniform for the first time, Wade checked into the game off the bench to a standing ovation and tallied a late crucial block to help the Heat snap a five-game losing streak.

“Dwyane coming back just really breathed life into the whole Vice campaign,” said Brett Maurer, the Heat’s lead graphic designer. “It brought so much excitement back to Miami. The fans already connected to the jersey, but it gave them another story to attach to. Everybody in Miami loves Dwyane Wade. To see his return in Vice, that was really the pinnacle.”

A season later, “Vice” is still the best uniform in the NBA — and it’s not even close. In November, the Heat introduced their second City Edition uniform, a black version of the original look, referred to as “Vice Nights.” And on Wednesday, the team unveils its new Earned Edition uniform, presented by Nike to all 16 teams that earned a spot in last season’s playoffs. Miami’s version is called “Sunset Vice” — a vibrant and unprecedented fuchsia combination. For the first time, an NBA team will take the hardwood in pink, head to toe. And with Wade embarking upon his countrywide #OneLastDance tour, as he’s set to retire at the end of the season, it’ll be the final new uniform of his career.

“The Sunset Vice uniform,” Maurer said, “was a great opportunity to collaborate with Nike to extend this whole story.”

The story of Vice didn’t begin with the white uniform.

“The black one was actually designed first,” Maurer said. “When you’re making all these, there’s a lot of digital sketching, you’re trying a lot of different concepts — and the one that hit the artboard first was black.

Led by McCullough, the Heat’s creative department had a decision to make.

“We didn’t want the black uniform to come out first and overshadow the white version,” McCullough said. “So we chose the white uniform to … introduce the Vice concept.” The look caught on like wildfire, with the Heat selling more of their City Edition uniform last season than those of all 29 other teams combined.

“When I saw the uniforms, I was a fan of them, as was everyone in the league.” — Dwyane Wade

“The white one felt like everything Miami could possibly be in a uniform format,” Maurer said. “So we took it from there.”

When the time came for the league’s second installment of City Edition uniforms, it was apparent that, with the white “Vice” uniform, the Heat had already set the standard during the 2017-18 season, Nike’s first as the NBA’s official apparel provider. This season, the Minnesota Timberwolves introduced a City Edition uniform inspired by the late musical genius Prince. The Brooklyn Nets paid tribute to the late MC Biggie Smalls with Coogi sweater trim on theirs. And the Philadelphia 76ers broke out a Rocky- and Creed-themed look. The Heat returned even stronger with their black “Vice Nights” uniform that the team will wear in 15 games this season — 14 will be played in Miami on a special Vice-themed home court at AmericanAirlines Arena. 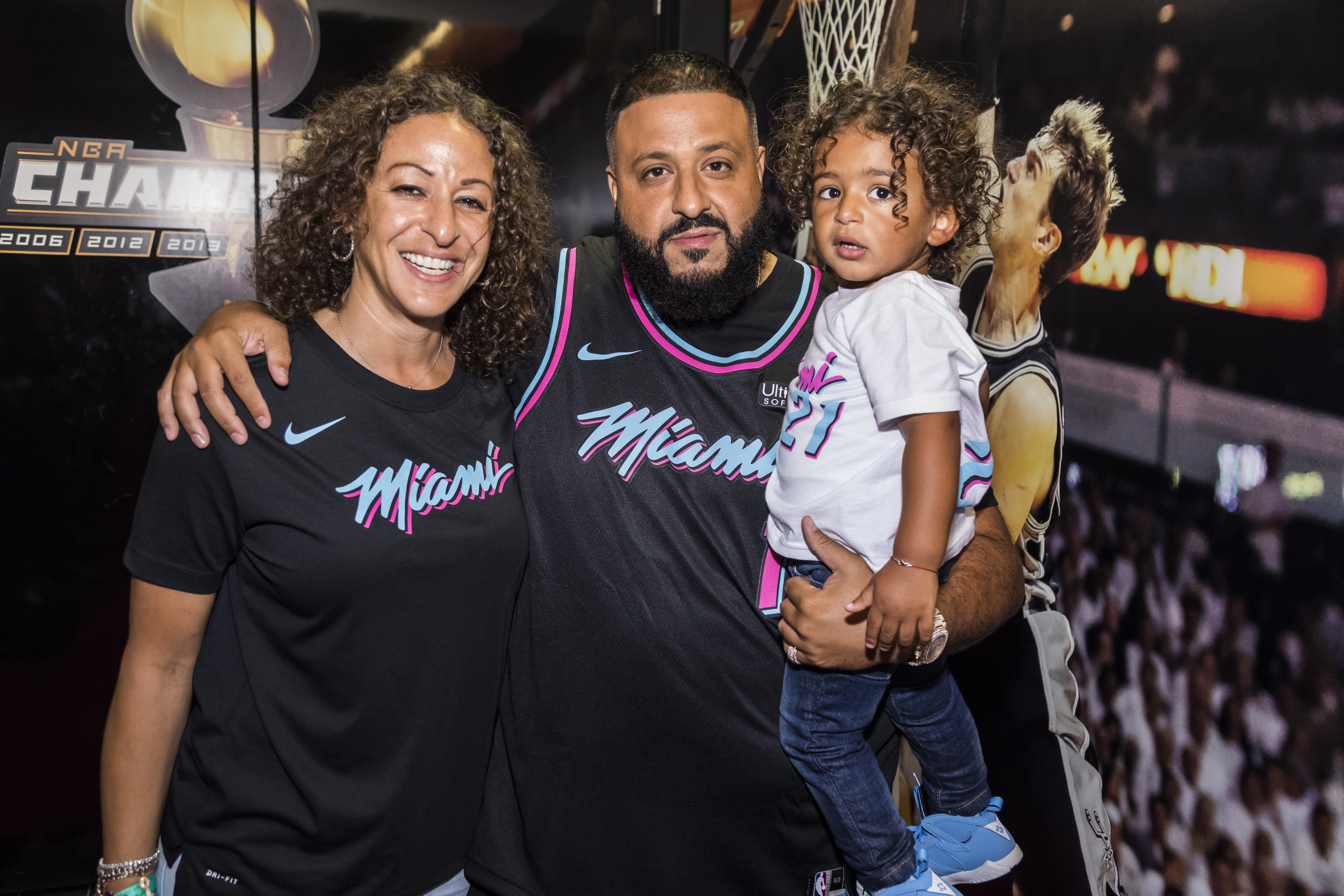 At midnight on Nov. 9, the Heat’s “Vice Nights” merchandise went on sale. And according to the organization, fans from 146 countries visited the team’s online store that first day. As part of the uniform’s campaign, Miami Heat dancers wanted to promote women’s empowerment. So the team partnered with its uniform sponsor, Ultimate Software, to create the “Vice Vice Baby” initiative — meaning the first female baby born in Baptist Hospital of Miami on the day of the “Vice Nights” debut would receive a full four-year college scholarship. Victoria Ortiz became that lucky baby.

The “Vice Nights” jersey also became a staple of swag for the city’s legends and tastemakers. Rappers Flo Rida, Rick Ross, Trick Daddy, Trina and DJ Khaled all have one. And of all three “Vice” uniforms, the black version (which some say should be the team’s permanent uniform) is Wade’s favorite.

“It looks better,” Wade said. “People like wearing black, so all shapes, sizes and colors look great in the black Vice jerseys. It’s something more people can wear.”

With Nike’s introduction of the Earned Edition uniforms for last year’s 16 playoff teams, the Heat wanted to dominate the conversation again. So the organization worked with the brand to land on the perfect eye-popping look. Nike sent the Heat an entire color wheel, featuring every shade imaginable in the spectrum of pink. Eventually, the team landed on laser fuchsia. 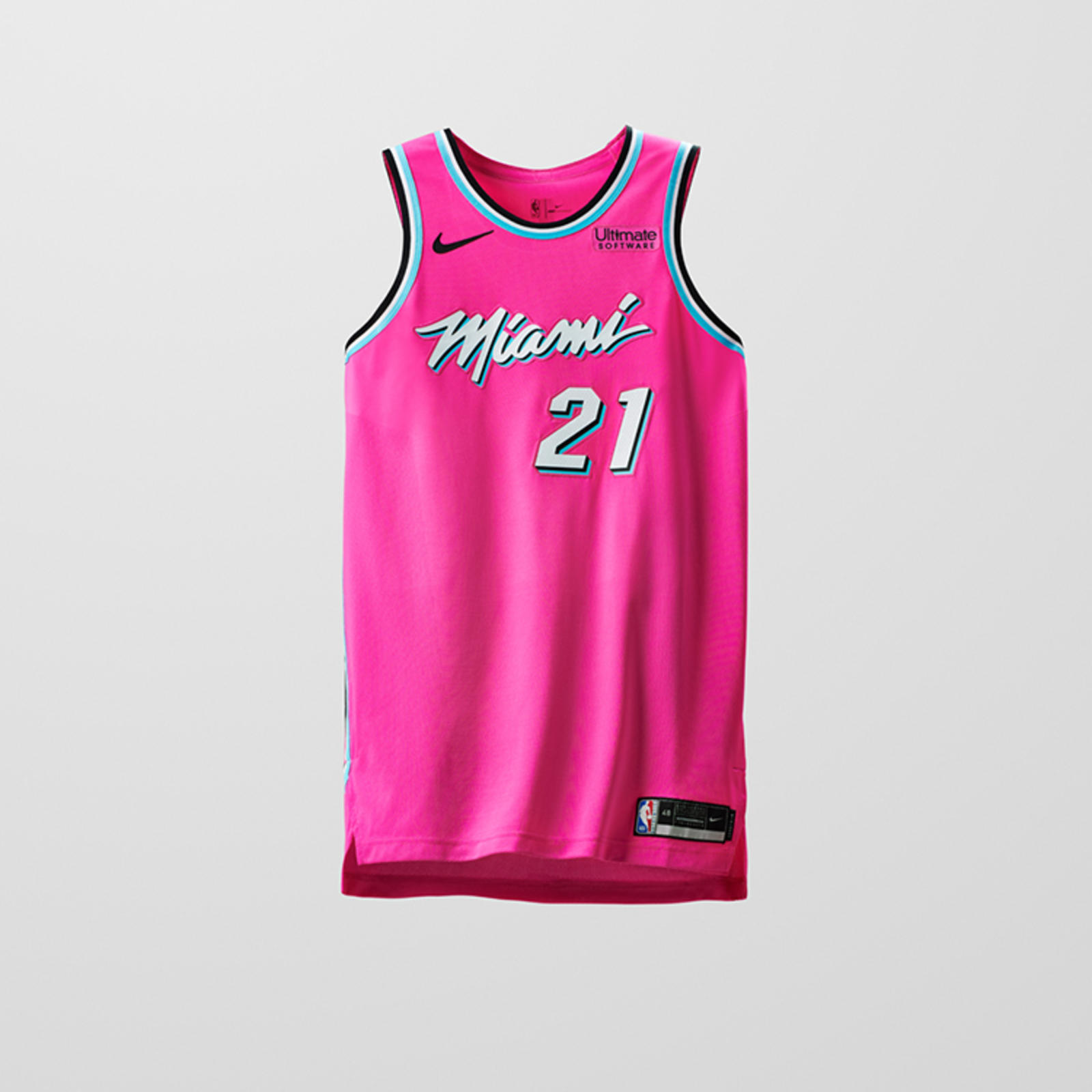 “We wanted to stay within the Vice family but go with a different color,” McCullough said. “We were really excited because by our estimation, we’re the only NBA team ever to go with a full fuchsia-colored uniform — jersey and shorts. It still retains its Miami feel and looks like it’s a natural extension of Vice. We think the color is truly unique to Miami.”

On Dec. 19, the new “Sunset Vice” jersey will go on sale in limited fashion — and the organization is already anticipating an immediate sellout. The Heat might just have another culture-shaking, instant-classic jersey on their hands in Miami.

“There’s not a lot of places,” McCullough said, “where you could pull this off.”