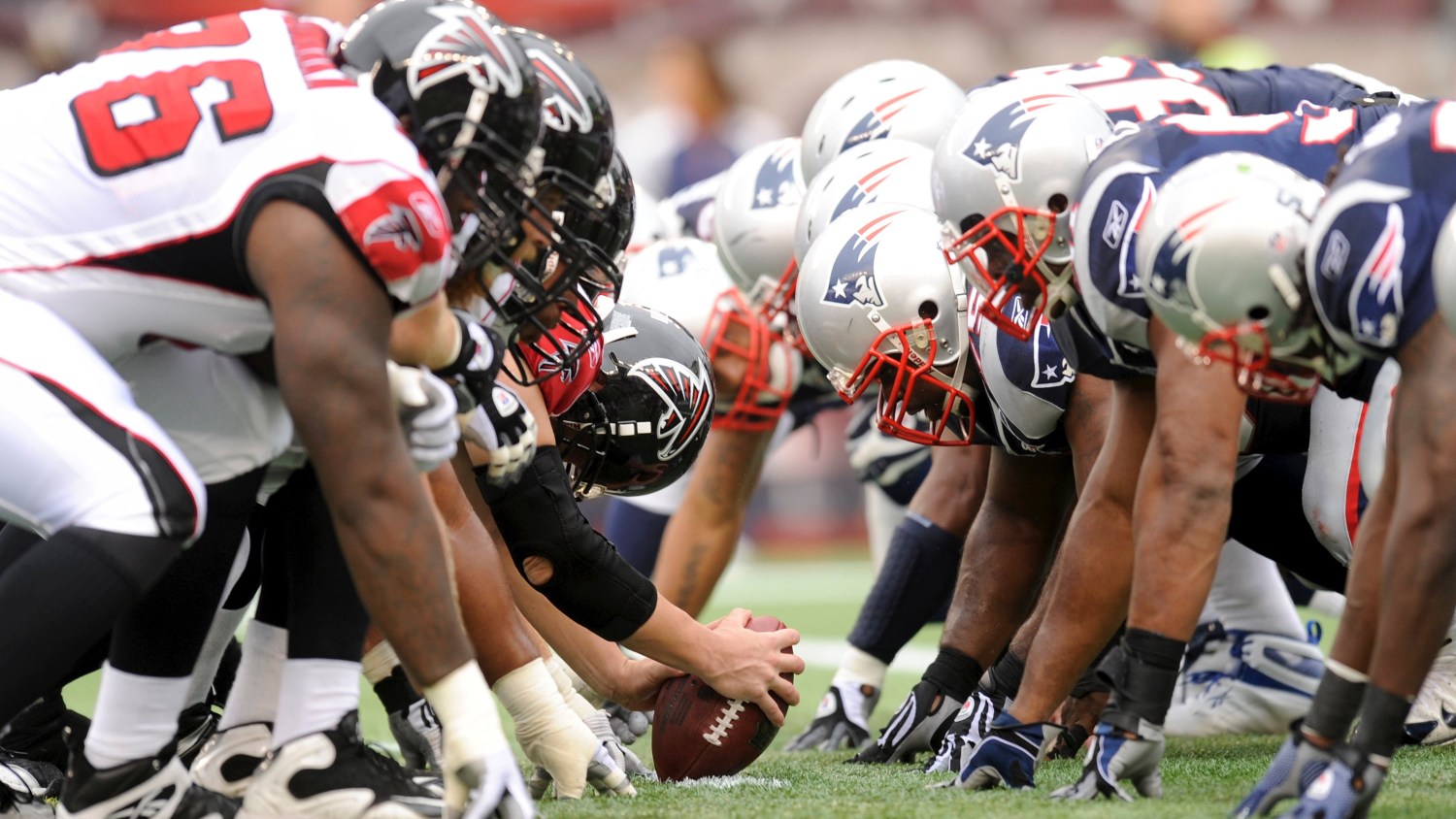 A general view of the line of scrimmage before the snap during the game between the New England Patriots and the Atlanta Falcons on September 27, 2009 at Gillette Stadium in Foxboro, Massachusetts. Rob Tringali/Sportschrome/Getty Images
NFL

From Malcolm Butler’s sizzling journey to Raheem Morris’ flip of the script, this is who we’ll be watching during the big game and why

This is it: Super Bowl LI. After the wild-card round, the divisional playoffs and the conference championships, the NFC’s Atlanta Falcons and the AFC’s New England Patriots are the last two teams standing. But on Sunday at Houston’s NRG Stadium, only one team will overcome the obstacles in its path. Only one will complete a perfect postseason. Only one will win the Vince Lombardi Trophy. For the Falcons and the Patriots, the Super Bowl will mark the final chapter in great stories of the 2016-17 season. Stories of new beginnings, of comebacks and of the will to fight. These are the most Undefeated storylines of the Super Bowl. Check ’em out.

By now, most know about Malcolm Butler’s long, improbable climb from being a hardworking employee at Popeyes to a New England Patriots Super Bowl hero. He did a little bit of everything at one of the chain’s restaurants in Vicksburg, Mississippi. To paraphrase Kanye (sort of): Butler had that ambition. One week he was moppin’ floors, next week he was cookin’ chicken.

Butler experienced many bumps along the path while bouncing around to multiple colleges. Then, he went undrafted in 2014 out of low-profile West Alabama. However, New England head coach Bill Belichick saw something he liked. The Patriots signed Butler, who began his rookie season buried on their depth chart. Because of his obvious coverage skills, he didn’t stay there long. And in Super Bowl XLIX, he completed his ascension. Butler’s interception at the goal line with only 20 seconds remaining on the game clock sealed the Patriots’ thrilling 28-24 victory over the Seattle Seahawks. To cap one of the best Super Bowls ever, Butler made arguably the greatest individual play in the big game’s history.

Ever since, he has proved he wasn’t a one-hit wonder. Last season, Butler was a Pro Bowler. This season, he was selected second-team All-Pro. Against the Falcons’ dope receiving corps, the Patriots secondary will face its biggest challenge of the season. Although Julio Jones is most definitely The Man, Atlanta has several other highly capable wideouts. The Patriots will need Butler to do a lot.

Wide receiver Taylor Gabriel wasn’t good enough for the Cleveland Browns. That bears repeating: Taylor Gabriel wasn’t good enough for the Browns. After their awful 2015-16 season — when was the last time the Browns actually had a good season? — released Gabriel. Generously listed at 5-feet-8 and 165 pounds, Gabriel possesses stretch-the-defense speed. As an undrafted rookie free agent out of tiny Abilene Christian in Abilene, Texas, in 2014-15, Gabriel was impressive: He averaged 17.3 yards on 36 receptions. But last season, as the Browns stumbled to a 3-13 finish that resulted in yet another coaching change, Gabriel averaged only 8.6 yards on 28 receptions. The Browns cut ties with Gabriel. For Atlanta Falcons offensive coordinator Kyle Shanahan, that was good news. In Gabriel’s rookie year, it was Shanahan, then the Browns’ offensive coordinator, who pushed for the speedy wideout to make the roster. The Falcons signed Gabriel off of waivers. Behind Jones this season, Gabriel emerged as quarterback Matt Ryan’s No. 2 deep threat. On his six receiving touchdowns, Gabriel has averaged a whopping 42.7 yards. That’s the second-highest total among wideouts with at least five touchdown catches. Gabriel was a big part of an offense that led the league in scoring and powered the Falcons’ run to the Super Bowl. The Browns? They finished 1-15.

In 2009, Raheem Morris was sitting on top of the world. Morris, then only 32, was the youngest African-American head coach in NFL history and the fifth youngest overall. He led the young, talented Tampa Bay Buccaneers. Morris, it seemed, was on his way. But after compiling a disappointing 17-31 record in three seasons, Morris was on his way out. Next came his thoroughly unremarkable stint with the thoroughly unremarkable Washington Redskins. After Dan Quinn, Morris’ longtime friend, got the Atlanta Falcons’ top job, he rescued his dude from Washington. But the Falcons — who started 5-0 in Quinn’s first season — finished 8-8 and missed the playoffs. Quinn shook up the staff before this season, moving Morris, a defensive back in college and defensive backs coach at several stops in the NFL, to offense. The buzz around the league was that Morris could be out again. The buzz was wrong. Morris clicked with Atlanta’s wideouts. Obviously, having a monster like Jones in your group would make any position coach look good. But the Falcons’ other wideouts were great, too. Because of his strong work in unfamiliar territory, Morris, who’s only 40, could be back on the path to becoming a head coach again. Sometimes, it pays to completely flip the script.

There’s no sugarcoating it: New England running back LeGarrette Blount has had major issues. And not too long ago, it appeared as though Blount, despite his immense talent, had irreparably damaged his career. With one foot out of the league, Blount wised up and pulled it back in. You could make a strong argument that Blount, who has revived his career in New England, should have made the Pro Bowl. His league-high 18 rushing touchdowns — a Patriots single-season record — are the most in the NFL since Adrian Peterson also had 18 in 2009. Blount also rushed for a career-high 1,161 yards.

Blount picked himself up. After you fall down, that’s what matters most.

Pro Bowl safety T.J. Ward helped the Denver Broncos win Super Bowl 50. Now, Terron Ward, T.J.’s younger brother, gets his shot at the bling. A backup running back with the Falcons, Terron has made his mark on special teams. Six years T.J.’s junior, Terron has played in the shadow of his brother and first cousin, former Pro Bowl running back Maurice-Jones Drew. He’s steadily, however, building a strong reputation in the game. Undrafted in 2015 out of Oregon State, Terron made the Falcons’ roster as a rookie free agent. He has stayed on the grind each day to contribute. And very soon, Terron Ward may own a ring as dope as his brother’s.