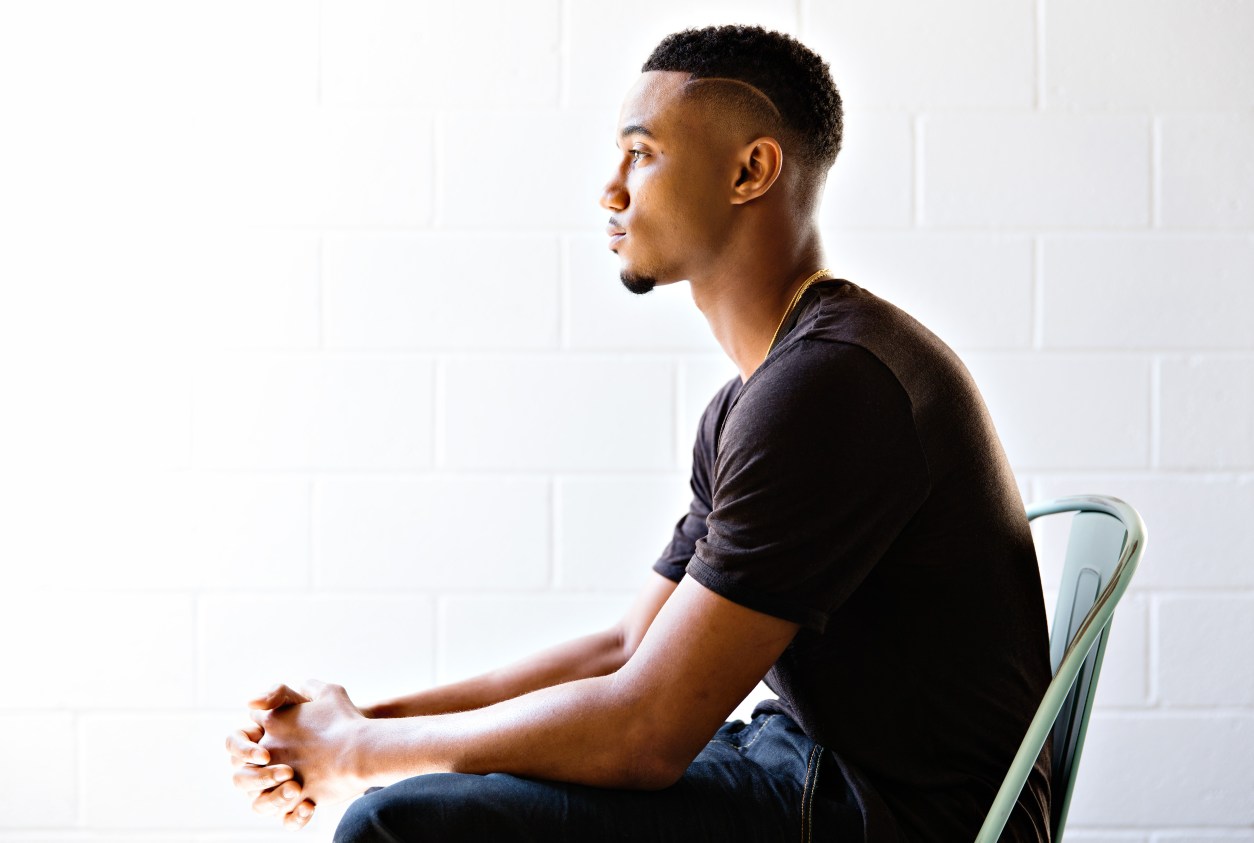 My sensei was telling me during a sparring match, The difference between a person who’s going to win and the person who’s going to lose is…the person who wins has the idea of what it is that he needs to make you feel. That same law can apply to whatever. It’s applied heavily into my acting. If I read something — I understand the script, I’m able to break it down in a way any tactical actor would be able to — but to transfer that to the person in front of me, and then to the audience, or to have it land on camera to where the audience watching television can be able to feel? If I can create that emotion and that energy within myself, then I can send it. — Jessie T. Usher

He walks into a room. His frame is medium. He’s quiet. He surveys the scene. He’s … not the guy you think is going to be The Guy.

With quick smile — is this a young Jamie Foxx walking toward you? — the guy who stars in one of the coolest scripted shows on cable and co-stars in possibly the biggest blockbuster of the summer, extends his hand, gives a very black man-specific half handshake/half hug, and prepares for his closeup.

Yeah. He pulls up in a modest American muscle car—with his mom in the passenger seat. We’re in Atlanta, where Usher shoots the Starz series, Survivor’s Remorse. Jessie T is super normcore—before slipping into a charcoal suit and black dress shirt for a video and photo shoot. He’s the soul and face of Independence Day: Resurgence, and this life is still new to him. It’s taking some getting used to.

“I’ve never been fond of, Oh, so who is your agent? Oh, are you going to this party? Are you going to that party? I’m a laid back person. I like to bowl, roller skate, and go to the beach and boogie board.” He does his acting thing in Survivor’s, though, a series about professional basketball star and his family. Like HBO’s Ballers and BET’s much-loved and now defunct The Game, Survivor’s, about to enter it’s third season is about life off the playing field. Just over a million viewers watched last season’s premiere— a series high. So, in addition to being the new Will Smith in the the sequel to 1996’s Independence Day, Jessie T. Usher is essentially playing a fictionalized version of young LeBron James.

It’s LeBron’s show. The newly crowned three-time NBA Champion is an executive producer of Survivor’s, as is Tom Werner, chairman of the Boston Red Sox, and James’ business manager and best friend Maverick Carter, who inspires the character Reggie Vaughn.

“What we wanted to do is create a new generation. Jessie was just kind of perfect because he had this honorable feel about him. He’s this very, very refined person. And he has this great smile.”

“The role [on the show] is youthful and eager,” say Carter. “LeBron [in real life] was more mature and a lot more outgoing than the character Jessie plays.” What happens when you’re the one who makes it out of the ‘hood? When you leave a childhood of economic strife behind? And you become the family’s income source? The show’s smart, relatable dialogue pulls it all together, and the characters are diversely complex—like M-Chuck (Erica Ash), Cam’s multilayered, gay older sister. The matriarch (Tichina Arnold) is familiar— she’s a doesn’t matter how fresh you think you are now, I brought you into this world, and I can take you out of it type of mama. What happens when some folks gets left behind? Survivor’s remorse. 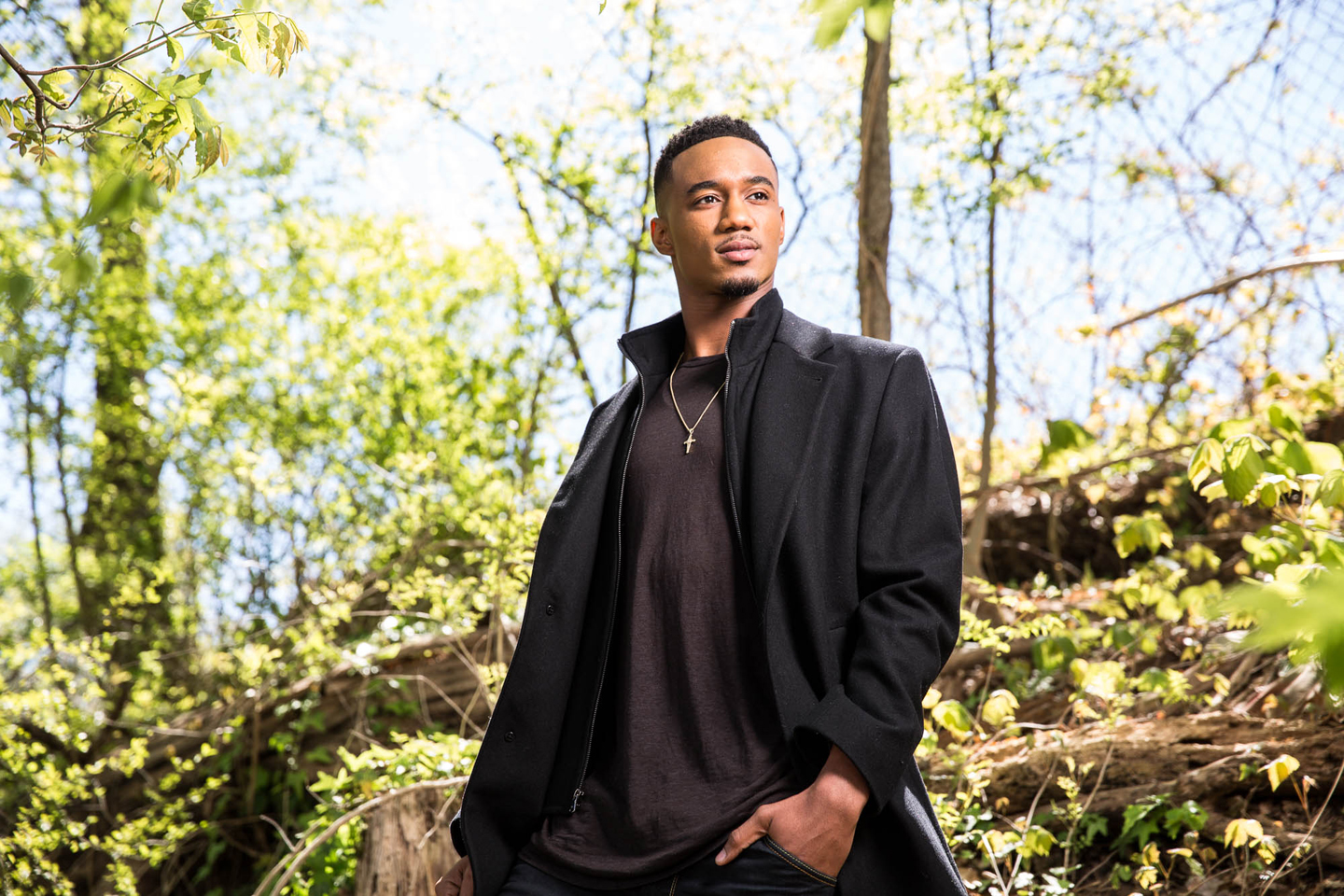 This season (it launches July 24) Usher’s character, Cam Calloway, dives into some dark places. “A lot of training,” Usher says. “I did workshops with everybody. I’d go…and just take little things from everyone, and you make it [my] own. I never wanted to become a drone to someone’s method.” Usher has in fact built up quite the acting résumé over the last 11 years. His first role was in an Oscar Mayer commercial, and then he showed up in everything from Miley Cyrus’ Hannah Montana to CBS’ Without a Trace. His big break came in 2013 when he landed a series-regular job in the Cartoon Network’s live-action Level Up. But on Friday, Usher will get a Hollywood inauguration unlike any other.

Exactly 20 years ago, Independence Day made a household name of Will Smith— the fresh prince of Bel-Air. Jessie T. Usher, born in Maryland, was four at the time, and grew up watching his older sister participate in beauty pageants and audition for commercials. Usher was a classic little brother: he wanted to do whatever he saw big sister Jesstia doing.

“I’m a laid back person. I like to bowl, and roller skate, and go to the beach and boogie board.” —Jessie T. Usher

Smith as a movie star had an impact on young Jessie T. as well. Independence, which grossed more than $817 million worldwide, is a science-fiction disaster tale, and featured the kind of destructive deliciousness moviegoers hadn’t seen in some time. The film helped to resurge the sci-fi genre and was a major coup for Smith, who had transitioned to from hip hop to television comedy. Usher was obsessed with The Fresh Prince, and was a huge fan of Smith’s. His first job in film was working as a background actor in 1998 for Smith’s Enemy of the State. Now Jessie T. Usher is portraying Dylan, the stepson son of Smith’s Captain Steven Hiller in this new film.

Roland Emmerich, director of Independence Day: Resurgence, says he knew he picked the right man for this role when he shot a scene where Usher had to brief a pilot before the first attack. He could tell when they shot the first take that Usher was nervous, but easily he morphed into a leader, the kind of man that thousands of fighter pilots would follow into an alien attack. The kind of man who could slide into a character and make you forget that one of Hollywood’s biggest superstars isn’t in a film.

“What we wanted to do is create a new generation. Jessie was just kind of perfect because he had this honorable feel about him. He’s this very, very refined person. And he has this great smile.”

“We wanted to create a new generation. Jessie…had this honorable feel about him. He’s this very, very refined person. And he has this great smile. We didn’t want him to fill the shoes of Will Smith. We didn’t make him too funny, either,” says Emmerich, who also co-wrote and directed the first Independence Day. “We needed somebody who had a natural charm and feels the pressure of this famous ‘father’ he has.”

Jessie T. Usher—fame isn’t what excites him. The work does. The idea that he can widen the gate for the next guy does. The potential power he’ll gain from starring in a Hollywood blockbuster does. “I want to play Arthur Ash,” he says. “Someone who touched people’s hearts in ways that they never forget.” For right now, Usher is ready for moviegoers to get a good look at what he can do. Everything else? Well, maybe that will come later.

“I’m hoping Independence Day blows up and people love it for what it is. I’m hoping that they just perceive what it is and appreciate the work that we did because it was a lot of work,” he says. “If that does happen, then nothing but great things that will come.”