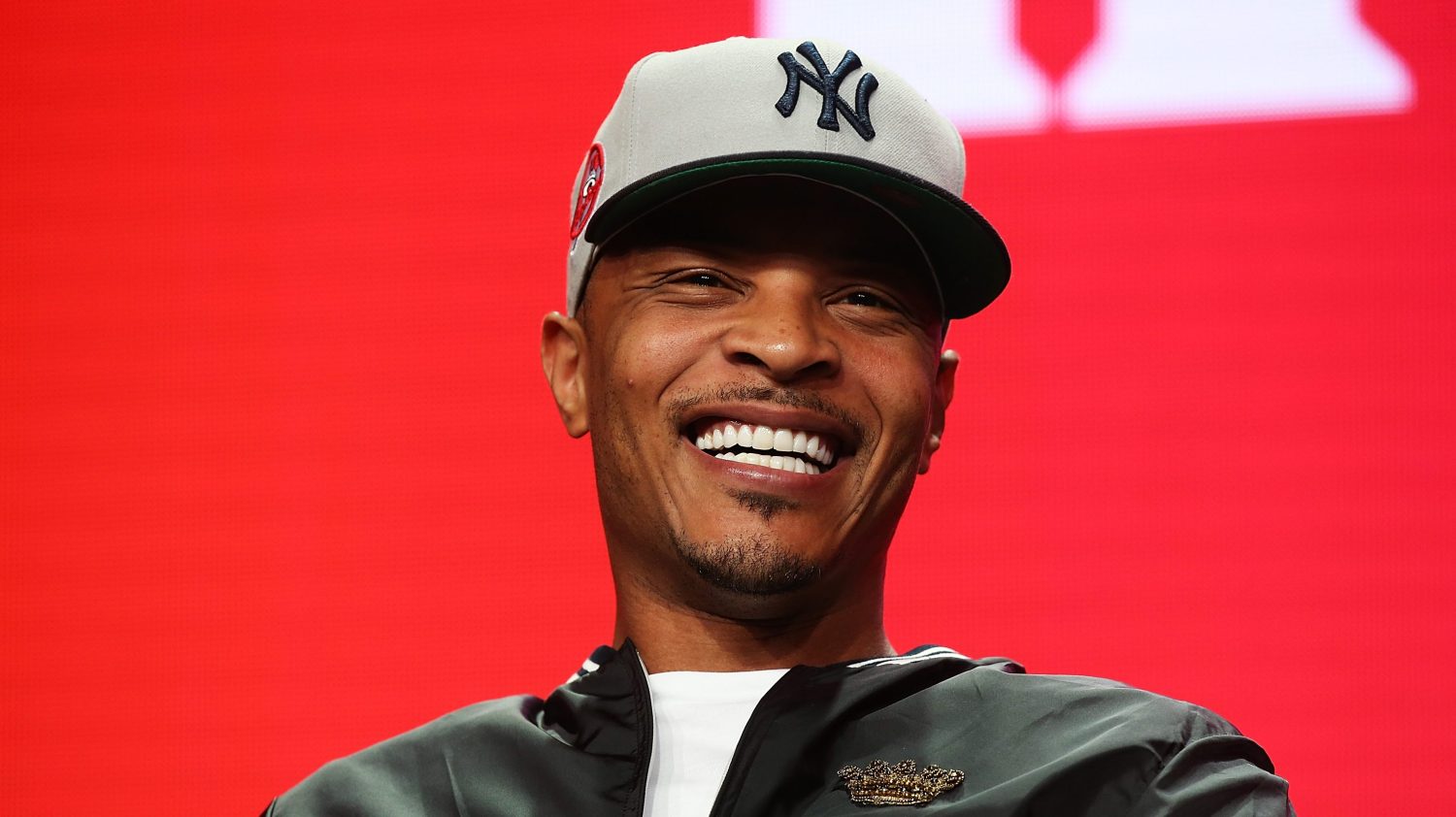 Rapper T.I. of the television show “The Grand Hustle” speaks during the Viacom segment of the Summer 2018 Television Critics Association press tour at the Beverly Hilton Hotel on July 27. Phillip Faraone/Getty Images for Viacom
Music

T.I. on Kaepernick, LeBron James, new music and why he’s no longer boycotting the NFL

The Nike ad ‘strengthened the movement of fair and decent people’

A decade and a half ago, a skinny young guy with a propensity for cocking his knit hat to the side helped popularize a subgenre of hip-hop we didn’t know we needed. His name was T.I., a shortened version of his childhood nickname, Tip — because Clifford Harris Jr. was a tip off the old block, as they would say around Bankhead, the Atlanta neighborhood in which he grew up.

Tip gave us trap music. And, not surprisingly, it blew up all around the world. T.I.’s genre-defining second album, Trap Muzik, arrived in 2003, and the stories, about drug dealers in the trap, were set to big bass beats. Some said his work glorified the worst parts of ‘hood life. Others said T.I.’s work was akin to what we experience in cinema — or what we should be experiencing in media: raw, unedited looks inside of neighborhoods we came from, have family in or should simply know about.

Fifteen years, three Grammys and an NAACP Image Award later, T.I. has a new album out, Dime Trap. In it, he pays homage to the music he named years ago. A lot has happened in those 15 years. Seven children. Marriage to Tameka “Tiny” Harris. A record label split. Jail time. Huge and impactful films, from ATL and American Gangster to Takers and the Ant-Man movies. Social activism. BET’s The Grand Hustle. And so much more. And at 38, T.I. is at his most unfiltered. He hopes you’re listening.

LeBron James was listening to Trap Muzik on his IG Stories recently.

It’s an honor and a privilege and a pleasure. LeBron is one of the most prolific voices of our time. Not just prolific from an athlete, but period. His perspective, his voice, his platform is extremely important to this generation. Any way that we can align our efforts and energies, man. Any way I can inspire him — because cause he’s inspired me and everybody else.

Except for when he’s coming up against the Atlanta Hawks, right?

Well, you know what? I’ll tell you. I ride with LeBron. You dig? If anybody else play the Hawks, though. Anybody else.

What are your hopes for [Atlanta Hawks point guard] Trae Young?

[That] he gets out there and distributes the ball well. Hit the long ball. Lead the team. Let your work ethic and your contributions … garner the respect of your teammates … to lead the team.

“I’ve never really paid attention to who’s paying attention. I was just trying to say what I felt was mindful.”

What’s changed for you in 15 years since Trap Muzik dropped?

The way I now respond to situations and circumstances, I think, has changed. I don’t really jump headfirst into things as much as I used to. I fall back and kind of observe the full picture … and form a decision over time. I feel like [I was] handling things [from a] microwave perspective … instant gratification.

This new album … there are a lot of revelations. Why is it important for you to essentially put your journal to music at this point in your career?

My music has always been about the things I’ve been going through and experiencing. Those things changed. It’s time to give a present-day picture.

Yes, but this is very personal.

Music allows me the opportunity to color outside the lines.

Music also gives you a platform to really drill down on things that are important to you — like social justice, and even your marriage.

I just wanted to make it informative as well as inspirational. The challenge is always finding ways to entertain and inform. These are the things that are important to me, and there are other people who live similar lives and who have similar challenges.

You don’t just shut up and rap, Tip. Why is that?

Some people might say I just won’t shut up! Ever since the beginning of my career, I’ve always … been proud to say I was the voice for the voiceless. It’s just that that voice changed. The purpose of the voice changed, over time. I think that the state of the nation, things are going on right now. As a father, as a human, it’s hard for me to see that and not utilize whatever influence I may have to try to affect the world in a better way, so my children will live.

What was the tipping point for you? What happened that made you want to amplify your voice?

Definitely the murders of Philando Castile, Eric Garner, Alton Sterling, Trayvon Martin and Mike Brown. All of those … the way that they’ve been handled. So blatantly waved in our faces, along with the decrepit demeanor of the president during the campaign … the revolts that it fueled. Seeing those things made me feel like I didn’t have the option to just stand still and submerge myself in my luxury. As a father, I was obligated to do something.

You recently spoke out about the 13th Amendment, after Kanye West went on a rant about it. You were very eloquent and steadfast — and informed. Did you ever worry that no one would take you seriously?

I’ve never really paid attention to who’s paying attention. I was just trying to say what I felt was mindful. I’ve [been] trying to inform myself better on policies and procedures of certain candidates, and certain branches of government, and trying to inform others. Everybody has the potential and the opportunity to do that. We all have platforms. You don’t have to be a celebrity to have a platform. [You can go] on Facebook, you can reach out to people and give them a message, just like you’re giving a flyer to them for a party. I just started there, and from there, I found other ways to get at it. Partnering with people who are well-organized, like Black Lives Matter, or … Ernestine Johnson, and her husband, Jay Morrison. People who are already boots on the ground, day to day.

Along those lines, earlier this summer, you expressed your disappointment in the NFL. You said you were boycotting the NFL this season. But as of right now players can protest and there’s no disciplinary action. It’s not going to stay in place forever, obviously. Something’s going to have to give, but does that change things for you?

For this season, I think that was a fair enough compromise. That was enough of a consideration made by the league. Now … it’s one thing for each individual team to have their personal take and stance on it. That’s between that team and their fans. Now, if the NFL, as a whole, as a corporation, if they take a certain specific stance that is biased, or it’s oppressive — as a fan, I can’t support that. They, I guess, took enough initiative to keep it even. You know what I mean? You can’t ask for someone to be all the way in your favor. All you can ask is for them to be fair. You know what I mean? I think that was fair enough to say, ‘All right, cool. You all enjoy this season. We’ll pick it up on the offseason.’

“My music has always been about the things I’ve been going through and experiencing. Those things changed. It’s time to give a present-day picture.”

You’ve done some work with Colin Kaepernick. Tell me about that.

Yeah, Kap, man, we pick each other’s brains on certain activations. I let him know about things that I have going on. He does things for me. We’ve contributed funds to one another’s causes before, and I feel like he’s always a phone call away. The work that he’s been able to do and the awareness he’s been able to bring … is immeasurable. It’s an honor and a pleasure to work alongside him.

The Nike campaign, and the response to the campaign, was so major. Colin taking a stand by taking the knee inspired so many people that it gave Nike a $6 billion boost.

Phenomenal. It was the thing America needed to know it was on the right path. You know what I’m saying? Because for a minute, you could see that the nation getting on some, if you can’t beat them, join them. I’ve seen some people who were kind of in the middle start to break. The Nike ad … it broadened the spectrum and strengthened the movement of fair and decent people who want to see the right thing done in America. Not the old, hateful racists who have been trying to keep us regressing and shunned into the Dark Ages. Another thing, man. I think that these corporations — let’s not even talk about politics, let’s not talk about personal opinion. Let’s talk about business. All these [people] who have these right-wing conservative, super hard-line stances? That’s the past. … Just as a businessman, why would I market to the past? Why wouldn’t you look to the future? These [people] lost the war, and I’m tired of talking about that. … Sorest losers I have ever seen … Like, ‘You lost, bruh. Nobody likes you.’

“I ride with LeBron. You dig?”

So now that you’re back in the game, what are you planning for Super Bowl?

Taking that day by day. As we get closer to the day of, I’ll be able to share more. But everybody’s just preparing themselves to be in a position to take advantage of the inevitably approaching opportunities.

What’s the key to your consistency?

“We all have platforms. You don’t have to be a celebrity, to have a platform.”

What is exciting right now about hip-hop?

The level of impact that it’s had on the world … it’s increased so much. So big, and so broad. There’s Latin trap music and EDM trap music and traditional trap. We’re talking about traditional trap! It’s so diverse now that there’s something literally for everybody, no matter what walk of life you come from. Your story’s being told. I think that’s how you really affect culture and affect history. That’s how you etch yourself into world forever.

I see a lot of technology taking the place of true talent, and that’s great for the tech world, but for the world of art and culture, I think it should be that whoever did more work to reach a certain level of artistry … to be considered a professional … I just think it should be a little bit more work [for people to become an artist]. I think you should have to work at it a little more. It shouldn’t come so easy, and instant.

To that, is there any moment that you would love to do over?

No, man. It might mess something else up if I ever do that. I do that, I would think it might have an adverse effect on something else in the future, or in the present.