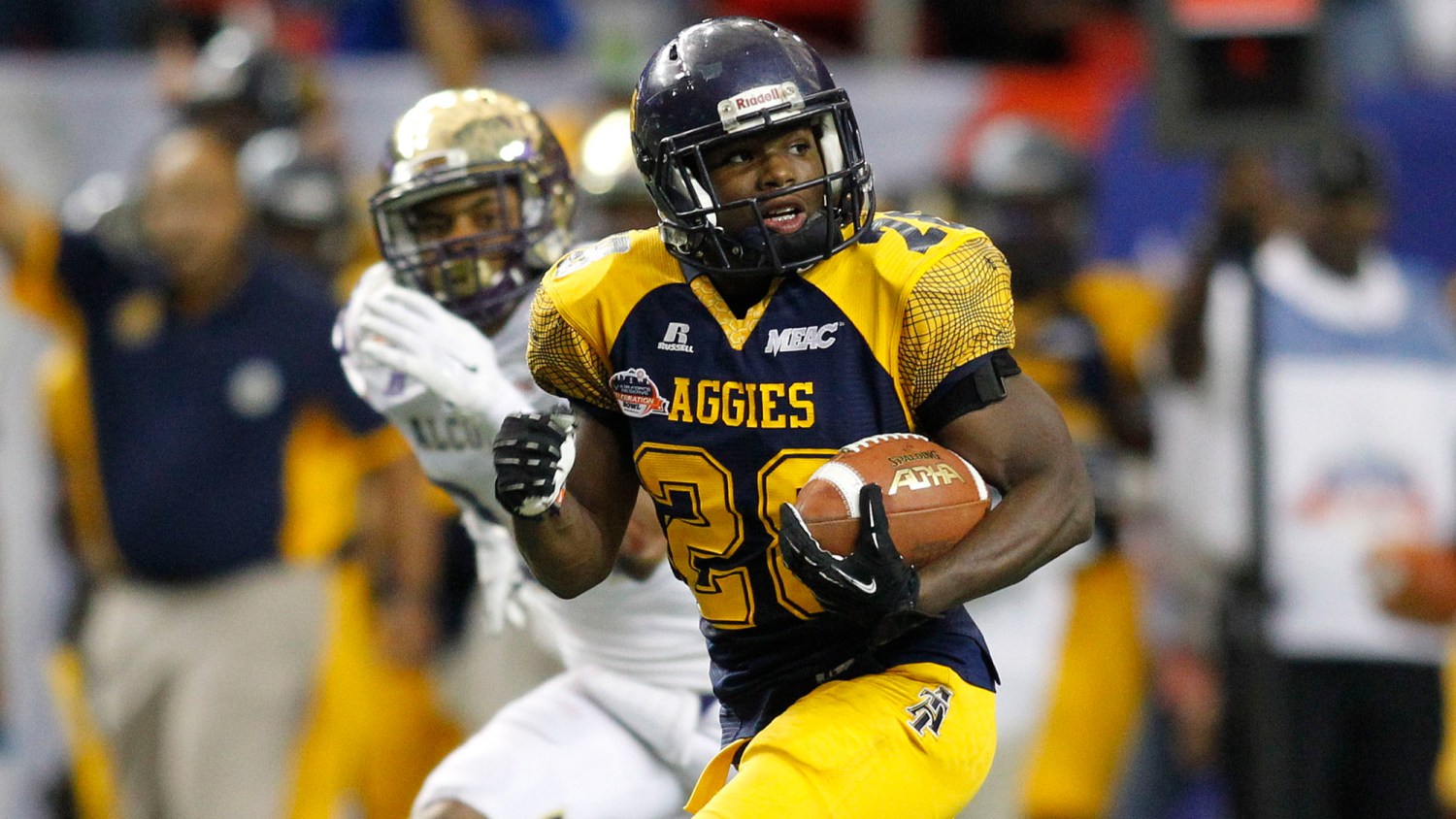 North Carolina A&T Aggies running back Tarik Cohen (28) runs the ball for a touchdown against the Alcorn State Braves in the fourth quarter of the 2015 Celebration Bowl at the Georgia Dome. Brett Davis-USA TODAY Sports

Tarik Cohen is running away from the competition

He attempts another 200-yard-plus game Saturday at Howard

The moniker is for the way the diminutive 5-foot-6, 173-pound sensation is setting the historically black college (HBCU)-loving football world on its ear and running and dancing his way through the record books for the 5-1 Aggies, currently ranked 14th in the STATS Football Championship Subdivision (FCS) national poll.

Playing conference foe Norfolk State on an Oct. 6 contest carried on ESPNU, Cohen took a fourth-quarter handoff, started right before planting his foot and sprinting through a gaping hole untouched 62 yards down the middle of the Spartans’ defense for a touchdown. He left defenders and former South Carolina State running back Will Ford’s career MEAC mark of 4,660 yards in his wake.

He’s also taken to giving a warning. “You’d better appreciate him now, while he’s here, because you don’t get to see his kind very often.

“All he needs is a crack,” Broadway said.

Cohen, a Bunn, North Carolina native, is well on his way to becoming the most celebrated HBCU football player nationally in the last 20-plus years. You’d have to go back to McNair in 1994 to find a black college player with this much hype. McNair was chosen as the then NCAA I-AA (now FCS) player of the year winning the Walter Payton Award, finished third in the 1995 Heisman Trophy voting and was the third overall pick in the ’95 NFL Draft. He graced the cover of the Sept. 25, 1994 edition of Sports Illustrated with the caption, ‘Hand Him The Heisman.’ McNair is the last HBCU product so honored while still playing college ball.

If he keeps up the pace he’s set so far, Cohen is only likely to match the first of McNair’s mentioned feats. But what got the pros attention and propelled McNair to the top of the NFL Draft and serious Heisman Trophy consideration, not to mention being an SI coverboy, were his scintillating performances and astronomical stats.

North Carolina A&T Aggies running back Tarik Cohen (28) is tackled by Alcorn State Braves defensive back Warren Gatewood (24) in the second quarter of the 2015 Celebration Bowl at the Georgia Dome.

Cohen is doing the same.

He has three 1,000-yard seasons under his belt, adding about 200 yards each year to his total from the previous season. He ran for 1,543 yards last season, following up campaigns of 1,148 yards as a freshman and 1,340 as a sophomore. He’s averaging just under 150 yards per game this season, on pace for around 1,800 yards, even more if he and his team get another berth in the postseason Air Force Reserve Celebration Bowl. He ran for a career-best 295 yards, including touchdown jaunts of 74, 83 and 73 yards in last year’s inaugural bowl before a national TV audience on ABC.

He needs just 79 yards to become the MEAC’s first 5,000-yard career rusher and needs just 232 yards for second behind former CIAA and Winston-Salem State standout Richard Huntley’s HBCU record 6,286 career rushing yards. He’d have to keep up his 200 yards per game pace to eclipse that mark. Don’t bet against it.

Tarik Cohen: By the Numbers

He’s currently 18th on the all-time FCS rushing list. At his current pace (148 yards per game), he would end up as one of the top five rushers in FCS history. Georgia Southern’s Adrian Peterson’s FCS record of 6,559 yards appears out of reach.

All these are McNair-like stats. Funny thing is, Cohen said he’s much better now than he’s ever been.

“[NC A&T track] coach [Duane] Ross taught me that I wasn’t running the right way,” Cohen, who ran track for the Aggies last year, said. “I was just running before, using just my speed. I had no technique.

“He said I wasn’t picking my knees up high enough and wasn’t placing my feet down at the right angles. It’s helped me a lot. It’s made me a better runner.” He says he’s gotten stronger too. “I can bench 225 pounds [the weight used at the NFL combine and more than 50 pounds more than he weighs], 10 times,” he said.

Only a week before the Norfolk State game, Cohen put on another magnificent Thursday night ESPNU performance vs. Hampton.

Again in the fourth quarter, with his Aggies up 24-3 deep in their own territory with less than three minutes to play, several in the press box wondered why such a valuable commodity like Cohen was still in the game. They soon found out.

He took a handoff over the left side, veered a little to his left to find daylight, found an alley and took off on a 94-yard scamper before anyone on press row (except this reporter) could provide an answer. Hampton defenders seemed to have angles. Then they didn’t. It was the longest run of his illustrious career — a stunning one that even left the Minnesota Vikings scout in the press box going, “Wow!”

But he wasn’t through

Just last week, playing in Hurricane Matthew-ravaged Daytona Beach, Florida, on Oct. 15 against the talented but winless Wildcats of Bethune-Cookman, one of the teams picked to challenge the Aggies this year for MEAC honors, Cohen was once more in the glare of the ESPN cameras.

As the ball was hiked on the first play of the second quarter with the Aggies up 14-7, lightning struck again in Daytona Beach. Cohen took a handoff on a zone read to the right, made a cut and was gone, veering toward the left sideline for 87 yards as flailing Wildcat defenders gave up hopes of catching him.

For the record, that’s 676 yards (and seven touchdowns), or 225 yards per game over the last three games. As he heads into his game Saturday at Howard University’s homecoming, another such effort would have him second on the all-time HBCU list by the evening. The question is, can he keep up the torrid pace?

How about neither of the three previous efforts has been his best game this year? He produced that — again for the ESPN cameras — during a four-overtime thriller on the road playing above the FCS level against Football Bowl Subdivision (FBS) foe Kent State of the Mid-America Conference on Sept. 11.

The game was delayed for more than two hours because of bad weather and lightning in the Kent, Ohio, area. It was delayed so long that referees were about to approach Broadway and threaten to cancel the game (and the Aggies’ $300,000 guarantee with it). Not!

When the game started, the Aggies and Cohen really showed their stuff. He dashed and darted his way through and around Kent State defenders for 133 yards on 24 carries and caught nine passes for another 125 yards. He totaled 258 all-purpose yards.

On one signature play in the third quarter, he picked the ball up 10 yards deep in the backfield after backup quarterback Kylil Carter had it slip out of his hand while attempting a pass. He outran a group of defenders to the right, found daylight and sprinted 30 yards down the right sideline, then stopped, jumped over one defender to his left, spun away from another while cutting all the way across the field, passing defenders before running out-of-bounds on the left sideline.

The play started on the A&T 31. It ended on the Kent State 16. He was credited with a 54-yard gain. He easily ran a hundred yards.

He scored just one touchdown, a 2-yarder that allowed the Aggies to tie the score at 17 in the fourth quarter and eventually send the game into overtime.

What’s noteworthy is that commentators expressed more adoration and praise for Cohen’s 2-yard scoring run than for the aforementioned long dash.

On the 2-yarder, he took the handoff deep in his backfield at the Kent State 9, started left, sharply cut back right, stepped over a defender, shook another off his back like a bug, and got into the end zone standing up. Cohen made his usual mad dash to the Aggies sideline not even aware of the glowing reviews from those calling the game on ESPN.

“If you don’t believe Tarik Cohen is the truth now, then you must not like the Gospel,” color commentator Je’Rod Cherry, known as a practicing Christian, chimed excitedly. “Because this man is for real.”

Cherry, who played eight years in the NFL and has seen his share of NFL prospects, had by this time concluded that the hype that the preseason All-American had gotten was justified.

“And I tell you what Michael,” he said to play-by-play man Michael Reghi, “If you are the NFL, you might want to come see him play, ’cause he is the truth.

“You will not see a finer performance on the FCS or FBS level as what this young man has given us tonight.”

Reghi retorted, “You can put him at the NFL level. This guy can make plays.”

The guys in the booth and a national TV audience then watched the Aggies pull off a stunning 39-36 four-overtime victory over their FBS foes, thanks in no small part to Cohen’s heroics. Cherry dubbed Cohen “Superman” in the postgame wrap-up.

The NFL scouts have heeded Cherry’s call. They are coming in bunches now. In Daytona Beach on Oct. 15, scouts from the Minnesota Vikings, Pittsburgh Steelers, Los Angeles Rams and Cincinnati Bengals were on hand. It has caused others to look for dates on the A&T schedule to see him perform.

Their first question goes something like this: “Can he return kicks?” It’s the go-to inquiry from all scouts on 5-foot-8, 175-pound prospects.

A&T has the speedy Khris Gardin handling that chore. Gardin, all 5-foot-6, 164 pounds of him, broke the FCS single-season punt return yardage record last year. He and Cohen, both former high school sprinters, have an ongoing battle as to who’s the fastest man on the team. Cohen has reportedly run the 40-yard-dash in 4.28 seconds.

But Gardin was injured in the Oct. 15 game. So Broadway, he says “on a hunch,” had Cohen drop back in the fourth quarter to return a punt.

He fielded the punt at his own 33 and sprinted through the middle of the Wildcat defenders, virtually untouched, for a 67-yard touchdown. The play was called back for holding, but the scouts’ question had been answered, emphatically!

For his part, Cohen does not just see kick returning in his NFL future.

“Yeah, I can return kicks, but I believe I can make plays all over the field in the NFL,” he said.

Some have compared him to Darren Sproles, the 5-foot-6, 190-pound, do-everything specialist for the Philadelphia Eagles. Others say he’s more like LeSean McCoy, the bigger (5-foot-11, 208 pounds) but similarly shifty Buffalo Bills running back.

Then Bush it is. Cohen won’t have to worry about improper benefits at A&T, and he just might have a shot at reclaiming that trophy Bush lost.